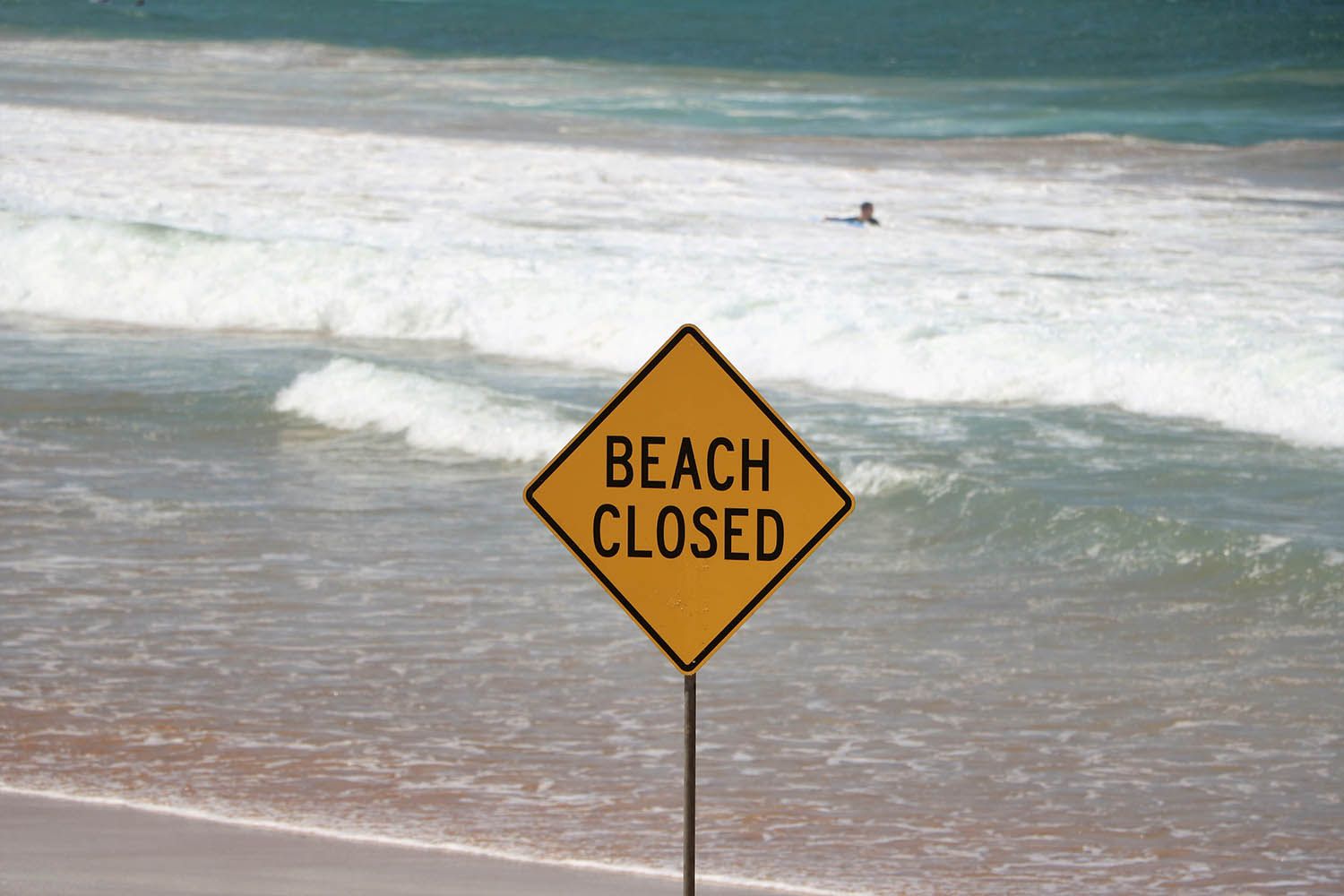 The Australian Dollar recovered the losses it suffered at the start of the new trading week courtesy of a broad pick-up in global investor sentiment courtesy of a fresh initiative to support the U.S. economy by the Federal Reserve. However, the overall trend in the Australian unit is expected to remain lower amidst ongoing concerns for both the domestic and global economy owing to the coronavirus pandemic.

The Australian Dollar remains primarily driven by broader investor sentiment, rising when investors are bullish and global trade is increasing, while it tends to fall when investors are running scared and the global economic outlook deteriorates.

World stock markets have recovered from a poor start during the course of the European trading session thanks to developments involving the U.S. Federal Reserve, and this has corresponded with the Australian Dollar recovering some of its earlier losses.

Driving a recovery in global markets was an announcement by the U.S. Federal Reserve of a massive expansion of its quantitative easing programme that will see it buy $75BN of Treasuries every day this week.

In short, the world's central bank has announced an unlimited quantitative easing programme that it hopes will underpin the global financial system and lessen the damage of the coronavirus to the U.S. and global economies.

Global stock markets nevertheless remain fragile as countries continue to implement strict measures to fight the coronavirus pandemic which will ultimately hit economic growth. An added source of some of the uncertainty currently gripping markets lies with a failure by the U.S. congress to agree an economic rescue package to support the economy.

Sentiment on AUD to Remain Skittish Amidst Domestic Lockdown

The Australian Dollar was lower against its major rivals earlier on Monday while the ASX 200 was down a further 3.44% after most states closed their borders to inter-state travel and introduced their own lockdown laws, in addition to the national curbs announced on Sunday.

The moves will cast a significant economic toll and come as Australian coronavirus cases topped 1600 on Monday, with the rate of infection appearing to accelerate.

"NZD and AUD were the big losers after the two governments announced lockdown measures. Australia is shutting down pubs and restaurants, while New Zealand will go into nationwide lockdown: everyone will be required to go into self-isolation and all non-essential businesses will close for at least four weeks," says Marshall Gittler, Chief Market Strategist at BD Swiss.

The Australian Dollar lost half a percent of its value against the British Pound at the start of the new week, with the Pound-to-Australian Dollar exchange rate quoting at 2.0160 at the time of publication, ensuring a steady upward trajectory of appreciation by Sterling extends yet further. 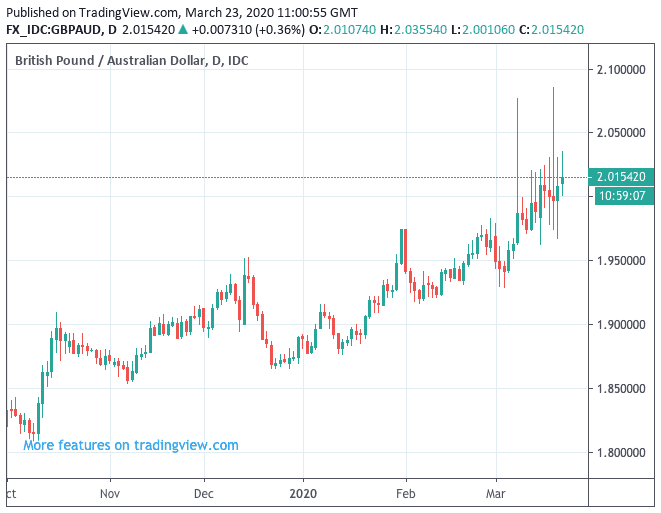 The Australian-to-U.S. Dollar exchange rate is meanwhile a percent lower than where it opened on Sunday night at 0.5742, and it is hard to suggest anything other than the preferred direction of travel for the exchange rate in the near-term is lower. 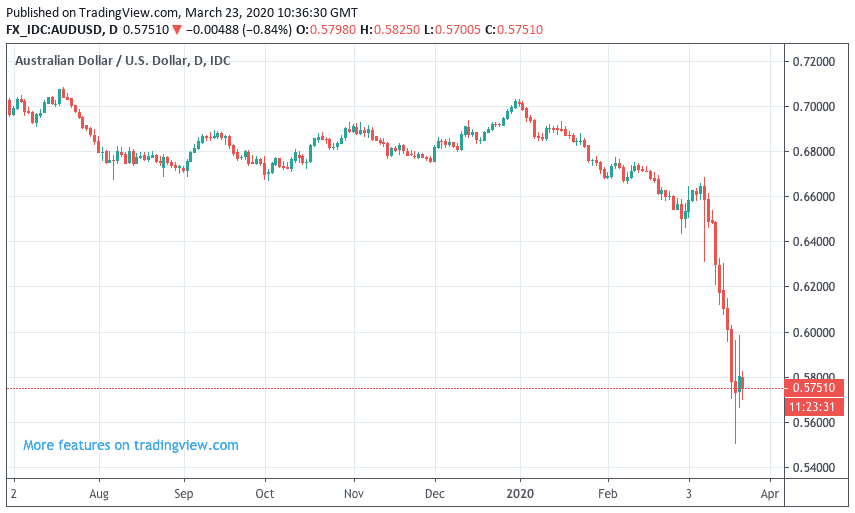 "Australia is entering the lockdown phase and the support from the fiscal side is still lacking, which makes the possibility of the RBA stepping in with more aggressive Quantitative Easing is all but material: markets know it, and this makes the prospect of buying the dips in AUD not very appealing," says Chris Turner, Global Head of Markets and Regional Head of Research for UK & CEE at ING Bank.

Thus far the Australian Government has announced a A$66.1BN fiscal package aimed at supporting the country's economy. This is the second round of fiscal stimulus to combat the fallout from the coronavirus. Total Australian Fiscal stimulus is now 4.3% of GDP, the highest in Asia.

Last week saw the Reserve Bank of Australia (RBA) cut the Cash Rate to 0.25% and started quantitative easing, aiming at keeping the 3-m yield at 0.25%.

While the markets will be keeping one eye on the attempts by authorities to stem the domestic impact of the coronavirus outbreak, it is perhaps the global picture that will ultimately hold the most sway over the Australian Dollar.

Ahead of the fresh lending measures announced by the Fed, a failure by U.S. politicians to agree on a fiscal rescue package served to enhanced a sense of investor gloom at the start of the new week, prompting a fresh round of selling in global markets and the Aussie Dollar.

Stock markets across the world remain pointed lower as investors sell exposure to equities in anticipation of a deep global recession. Asian and Pacific markets lead the way by trading in the red and were followed by European markets where the FTSE 100 is seen trading 3.7% lower and the Germany DAX is seen 4% lower.

"The reason for the crash this particular morning is that the U.S. government is unable to come up with a rescue plan. The U.S. Senate gave up trying to negotiate a bipartisan rescue bill on Saturday and the Republicans wrote it alone. It was unable to pass on Sunday," says Gittler.

However Treasury Secretary Steven Mnuchin and Chuck Schumer, Senate's Democrat leader, signalled there was still room for a compromise but the sheer scale of the political divide in the United States remains stark and further failures to find agreement cannot be discounted.

Under such circumstances we would expect the Australian Dollar to remain fragile and exposed to further declines in value.