- Domestic weakness to push RBA into a rate cut

- But BNY Mellon say bears will be disappointed

However, markets are currently unprepared for such an eventuality, therefore if the Reserve Bank of Australia (RBA) do cut rates as Morgan Stanley expect, the Aussie Dollar will move lower.

"Our core conviction at the moment is bearish on the Australian outlook. It is not hard to find data supporting a bearish view and recent figures continue to support our economists’ contention that the Australian economy, particularly the consumer, is in a period of retrenchment and deleveraging" says David Adams, an analyst at Morgan Stanley.

Further quarter 2019 GDP growth disappointed against expectations coming in at 0.4%, however the details of the report showed consumers refuse to lift spending following recent tax cuts, and the household savings rate soared to 4.8% from 2.7%. Credit card balances have meanwhile shrunk at the fastest rate on record.

This is an increase not seen since the 2008 crisis, and suggests subdued consumer confidence. 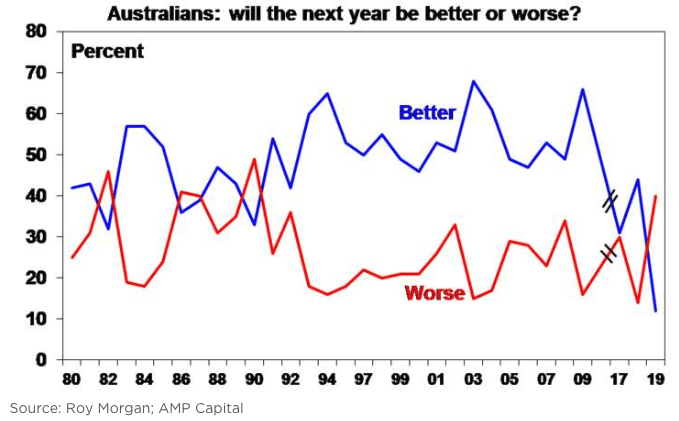 Above: Surveys confirm a decline in consumer sentiment. Image courtesy of AMP Capital

"Demand for labor is falling, with average weekly job advertisements, an important leading indicator for the labor market, continuing to fall and at a multi-year low. Meanwhile, business confidence is trending lower at a similar pace as consumer sentiment," says Adams. "The Australian data picture has remained uncompelling largely across the board, and this is even before we address the ongoing damage associated with the bushfires."

The bushfire crisis is expected to have a notable short-term economic impact on the economy and we saw the Aussie Dollar come under pressure at the start of the year when markets bet that the RBA might cut interest rates in response. Quantifying the cost of the current bushfire crisis is currently done by using the 'Black Saturday' fires of February 2009, which had an estimated cost of A$4.4bn, or 0.3-0.4% of nominal GDP at the time.

"The current fires are 14 times larger in terms of hectares burned (so far), so assuming a linear increase in total cost, that would equate to about A$61bn or 4% of nominal GDP for this year," says Adams. "The economic and potential political challenges, and their likely impact on risk premium, suggest that expected returns on Australian assets should underperform global benchmarks."

"This includes the currency," adds Adams.

The soft domestic picture translates into a soft outlook for the Australian Dollar, according to Morgan Stanley.

Foreign exchange markets have raised their expectations for a February 2020 interest rate cut, based on the observation that the economic impact of the bushfires will be addressed by the RBA.

Interest rate cuts tend to boost economic activity, and therefore it is understandable why the RBA might consider such a move at this juncture. However, a side effect of a rate cut is a weaker currency, hence the Aussie Dollar struggled at the start of 2020 when expectations for an interest rate cut rose.

The Aussie Dollar has since pared some of those losses as market expectations for a rate cut have faded somewhat.

But, Morgan Stanley believes markets are underpriced for a cut.

"A dovish RBA is a further headwind to AUD, and we argue that the market is underpriced for this outcome. We expect a 25bp cut at the February 3 RBA meeting in line with our economists' view. The market is currently only priced for about a 50% chance of a 25bp cut at the February meeting and a dovish surprise should be AUD-negative and push the rates curve lower," says Adams.

The Australian Dollar does however tend to take direction from developments in the global economy and international markets, and a pick up in sentiment towards China since the start of the year has had the effect of providing support for the Australian Dollar.

The Yuan has been heading higher, and because the Australian Dollar has a strong positive correlation with the Chinese currency, it has risen alongside in sympathy.

So, while the domestic scene might suggest a softer outlook for the Australian Dollar, the global picture is certainly more supportive, particularly now the U.S. and China have signed the Phase 1 trade deal.

"The AUD’s resilience must to some extent be pinned on the CNH which has enjoyed something of a straight line ascent of late. The strong relationship between the two currencies, on account of the two country’s close trading links, is clearly not being overlooked," says Neil Mellor, Senior Currency Strategist at BNY Mellon.

Trade developments aside, Mellor says "a combination of income and consumer tax cuts, along with lower real interest rates, are fairly potent ingredients for a domestic demand-led Chinese growth cycle."

Mellor says the resilience shown by the Australian Dollar over the past week could be the basis for further resilience that will ultimately disappoint those bears looking to bet on a further decline in the currency.