- Sales up 0.9% on Black Friday after building approvals gain.

- ANZ says "not all negative" news flow could cheer the RBA.

- Indicative shapshot of rates on offer at independent money transfer specialists: 1.8750-1.888 >>Get a quote

The Australian Dollar outperformed all its major rivals Friday and pared some of the losses it suffered earlier in the week, thanks in part to a run of positive economic figures which ensures the prospect of a February rate cut at Reserve Bank of Australia (RBA) is not yet set in stone.

Australia's Dollar was the top performer Friday after official data showed retail sales rising by a strong 0.9% in the Black Friday month of November, easily beating consensus expectations that looked for 0.4%. The data comes amidst a broadbased rally in global stock and commodity markets which is typically provides a supportive external environment for the Aussie currency.

That consumers 'went to town' in November is a positive omen for final quarter growth, even if it does leave subsequent sales readings vulnerable to declines.

The Aussie's comeback leaves the Pound-to-Australian Dollar rate lower for a third consecutive day but the Pound is still set to finish the week with a gain owing to sizeable losses seen by the Aussie earlier in the week. Market expectations for an interest rate cut at the RBA shot above 50% as it became clear that the short-term economic impact of the bushfire crisis would be significant, and the general rule-of-thumb in the currency market is that currencies tend to fall when their issuing central bank cuts rates. 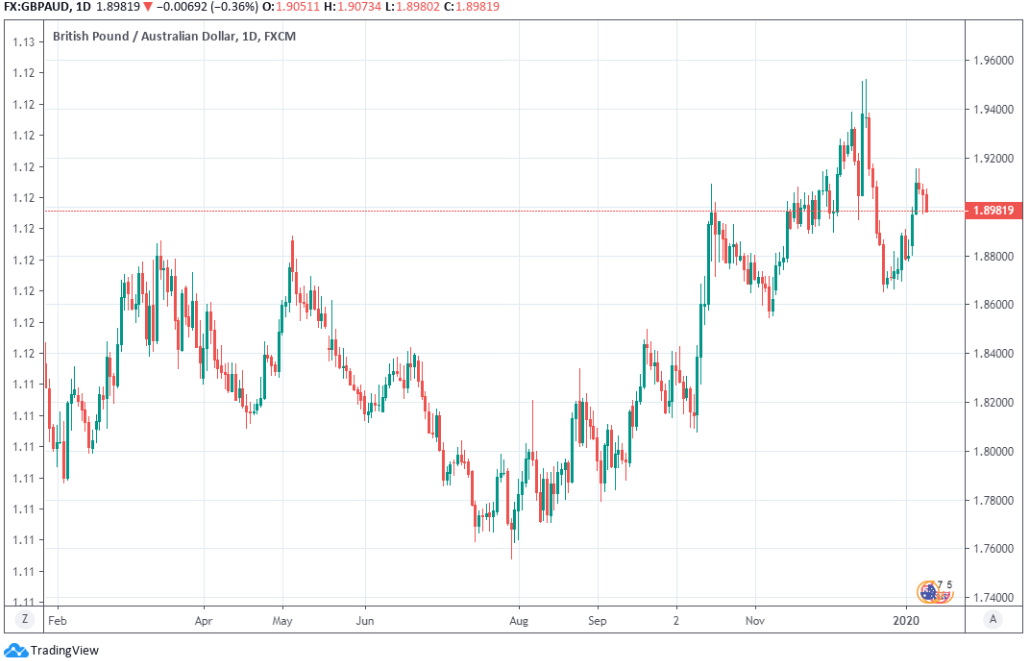 "News flow is not all negative. Employment grew strongly in November, as did building approvals, and job vacancies have risen. Retail sales rose 0.9% m/m in November, the strongest monthly gain since November 2017," says David Plank, head of AU economics at ANZ. "We still think it more likely than not that the RBA will decide that the path of least regret is to ease again in February."

Friday's retail report comes hard on the heels of other data that revealed a strong increase in November building approvals on Wednesday. Markets were looking for Australian authorities' approvals of new projects to have increased 2.1% that month but they actually rose by a sharp 11.8% that more than offset October's 7.9% decline.

This is after the November jobs report revealed a strong increase in employment and a fall in the unemployment rate for that month, delivering a win to the RBA, which has made labour market outcomes a key driver of its interest rate decisions as the bank pursues the 'full employment' thought necessary to deliver the 2%-to-3% inflation target.

Economic newsflow has not all been positive this week or in recent times but some important numbers have surprised on the upside and driven a reappraisal by the market of its expectations for a February rate cut, although ANZ's Plank says the December jobs numbers will be key to the RBA decision.

"It is no surprise that the bushfires are dominating the national conversation at the start of 2020. Appropriately, most of the present focus is on the immediate efforts to help those directly impacted," Plank says in a note Friday. "Loss of property and destruction of fauna and flora is not captured in the calculation of GDP. But the size, intensity and duration of the current Australian bushfires mean that they will almost certainly have a larger economic impact than past fires...ANZ Job Ads and ANZ-Roy Morgan Australian Consumer Confidence reports provide an early signal of an identifiable economic impact."

Pricing in the overnight-index-swap (OIS) market implied on Friday, a February 04 cash rate of 0.64%, well below the current 0.75% level but also above the 0.5% that would prevail in the wake of a fourth 25 basis point rate cut and also above Monday's implied rate of 0.61%.

Implied cash rates have a substantial influence on the Aussie although February's number is up from 0.57% in early December and from 0.45% on October 10, the day before the U.S-China trade deal was first announced. 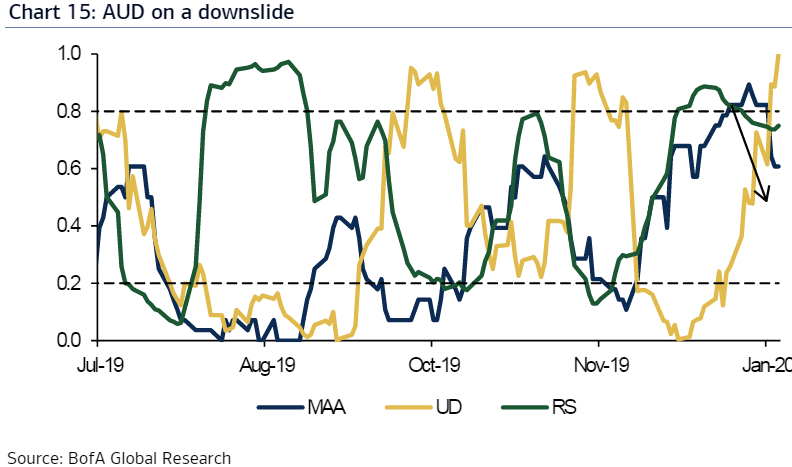 The uptrend in the implied rate, not to mention a marked easing of geopolitical tensions and increase in investors' apptetite for risk, has helped lift the Aussie from a decade low against the U.S. Dollar in the summer of 2019 and from multi-year lows relative to Sterling. But the outlook is hinged in substantial part on whether the RBA does continue to cut rates and on whether the world's two largest economies refrain from further trade hostilities. And for the Aussie at least, any fresh skirmishes between U.S. and Iran would also be a headwind.

Analysts and economists are optimistic this year will yield a turn for the better in the global economy that should be positive for the commodity-backed Aussie, although number-crunchers of another kind of quantitative discipline were less keen on the antipodean currency this Friday.

The AUD/USD exchange rate has arrested a week-long decline, setting itself up for what would be its first gain in five days and at a level that coincides with the 50% Fibonacci retracement of the post-summer 2019 uptrend.

Such levels often act as 'support' for asset prices and award-winning technical analysts at Commerzbank said Friday the Aussie should now stabilise before attempting to regain the upside initiative, but that a fall below 0.6852 opens the door to 0.6815 and then 0.6755. 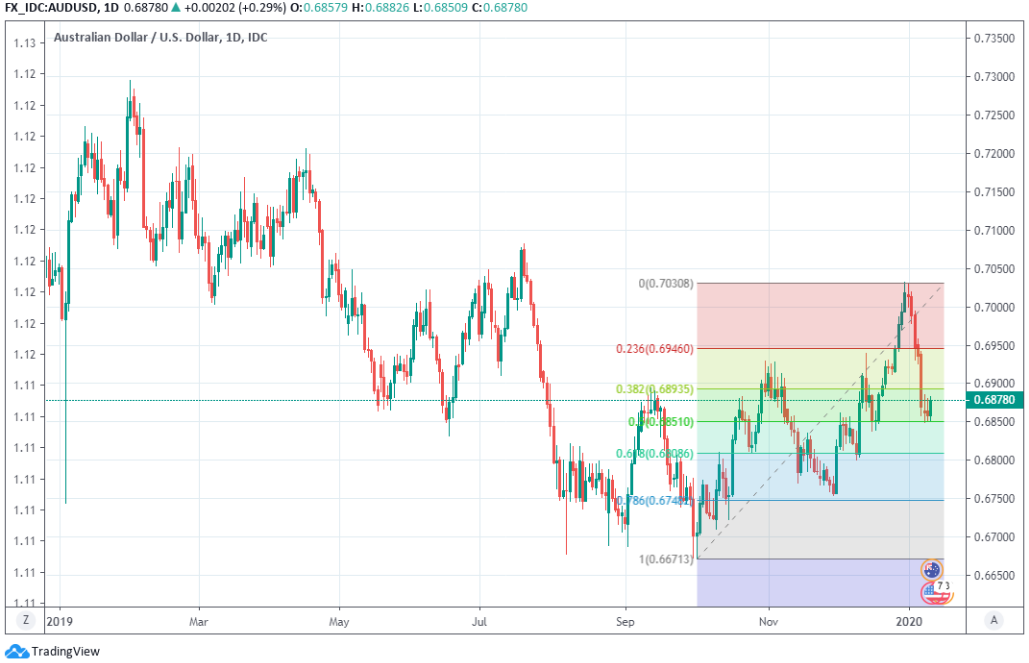 Above: AUD/USD rate shown at daily intervals, with Fibonacci retracement levels marked out for August-to-December trend.