- AUD advances Monday but risks are plenty this week.

The Australian Dollar bounced into the new week Monday amid an upbeat mood in global markets but analysts are warning of downside risks to the antipodean currency in the days ahead, with both domestics and international factors threatening to scupper the nascent move higher.

Risk assets including the Australian Dollar were in demand Monday and safe-havens were on the back foot as investors responded to claims of more progress in the U.S.-China trade talks while positioning for a widely anticipated interest rate cut from the Federal Reserve (Fed) on Wednesday.

President Donald Trump said from the steps of Air Force One Monday that negotiators are ahead of schedule in delivering the 'phase one' deal he claimed to have struck on Friday 11, October. This was after China's Ministry of Commerce confirmed Saturday that progress has been made, encouraging speculation that a formal pact could be announced within days.

"US Treasuries make fresh lows after President Trump says that the US is "a little bit ahead of schedule, probably a lot ahead of schedule" in talks with China. We did see a few accounts active to the buy side around the earlier lows in both UST futures and options, so we'll look to see if this is repeated," says Dan Noorian, a bond salesperson at UBS.

Australia's Dollar benefited from the risk-on mood Monday but not by enough to get the better of Sterling, which rose broadly in response to the EU having granted a third delay to the UK's departure following a request from the Prime Minister and MPs in parliament. Prime Minister Boris Johnson is also said to be close to having the numbers to force a general election, which might provide him with a mandate to deliver his Brexit proposals. Brexit has been an important driver of the risk-sensitive Aussie lately. 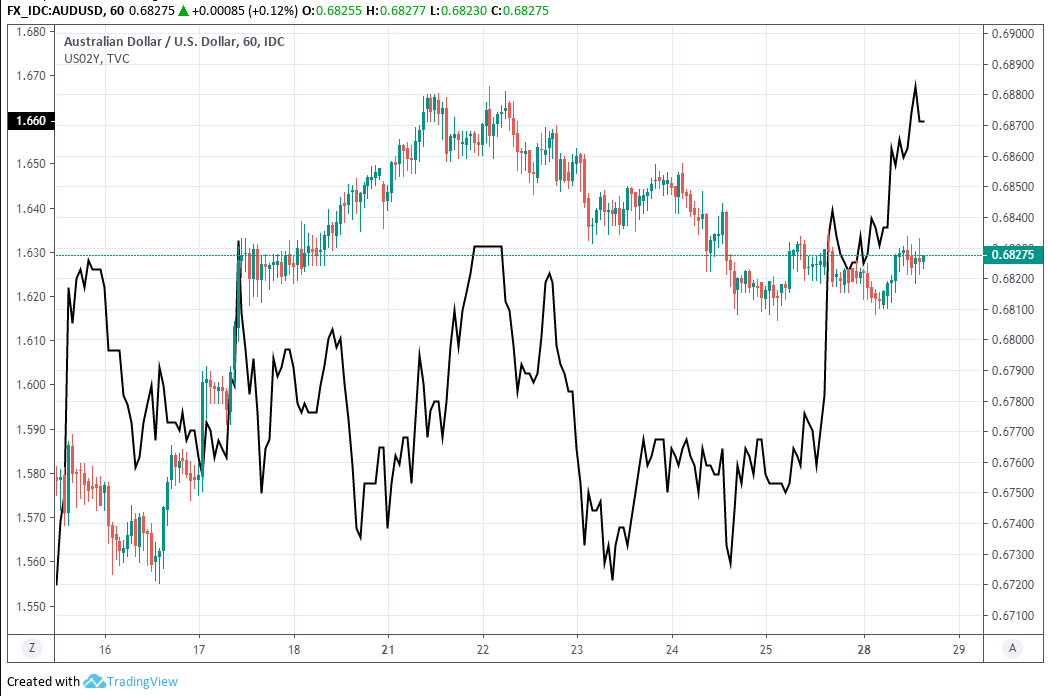 Trade statements have eased what had been mounting concerns over whether the agreement struck earlier in the month would ever see the light of day. And they're good news for Australia's commodity-backed Dollar, which has been hurt by the damage done to China's economy and Renminbi in the tariff fight. The Aussie tends to follow the Renminbi because of the large commodity trade between Australia and China, although it also follows the barometer of safe-haven demand that are U.S. Treasury yields.

Treasury yields rose after Trump's comments on Monday, indicating that investors sold out of safe-haven U.S. government bonds in response, and the Australian Dollar duly followed them higher. Yields reflect the percentage return offered to investors who buy a bond at any point in time and have an inverse relationship to bond prices because the coupon paid to investors is fixed at the point of issue and does not actually change throughout the life of the bond.

"The other background factor supporting risk appetite is the Fed’s easing stance even as US equity markets are bulling up near all time highs, an unprecedented situation. How the Fed ties itself into knots in framing why it is doing what it is doing will be a spectacle to behold at this Wednesday’s meeting, but the Fed has largely lost control of policy and the market thinks that this is a good thing," says John Hardy, chief FX strategist at Saxo Bank.

Monday's trade comments come just days ahead of the October 30 Federal Reserve interest rate decision. Markets have fully priced in a rate cut for Wednesday, which means investors will take their cues on the Dollar from any guidance given about future rate changes. This matters for the Aussie because it will impact expectations for the gap that exists between Aussie and U.S. cash rates as well as government bond yields, which is an important influence on the currency's appeal to investors. 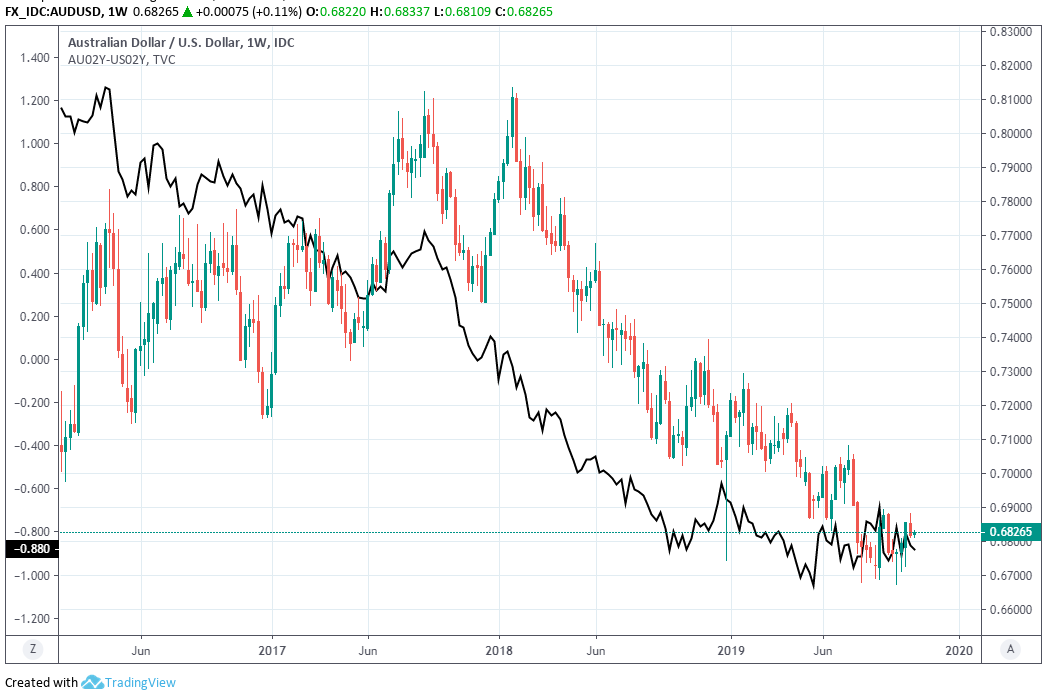 Back in September the bank suggested it would cut rates just one more time this year to complet its 'mid-cycle adjustment' of policy but investors have consistently bet that it'll have to cut further than that in the months ahead. Pricing in the overnight-index-swap market implied on Monday a heavy probability of the Fed following up with another rate cut in December, and also suggested the prospect of a further two cuts once into 2020.

"We think the risk is the FOMC signals it will hold the Funds rate steady at its 11 December meeting, sending US yields and the USD higher," says Kim Mundy, a strategist at Commonwealth Bank of Australia (CBA). "AUD faces further downside risks this week on the post‑FOMC USD reaction and Australian Q3 inflation data...Any unexpected weakness in the CPI could increase pricing for a rate cut and pull AUD lower."

Markets will be looking on Wednesday for the Fed to confirm those bets aren't misplaced although there's a chance the bank might neglect to do so, which is why some anticipate a turn higher by the U.S. Dollar later this week. However, Australia's Dollar will also take some of its cues from Reserve Bank of Australia (RBA) Governor Philip Lowe and from the third quarter inflation figures that are due out in the early hours of the morning.

Lowe is due to deliver a speech titled "Some Echoes of Melvile" at The Australian National University Tuesday, which markets will scrutinise for clues on whether the RBA is likely to cut its own cash rate again at the next meeting on Tuesday 05, November. The RBA has cut rates three times this year, more than offsetting the impact of the Fed's two rate cuts on the bilateral rate differential, and there's uncertainty over the timing of its next likely move. 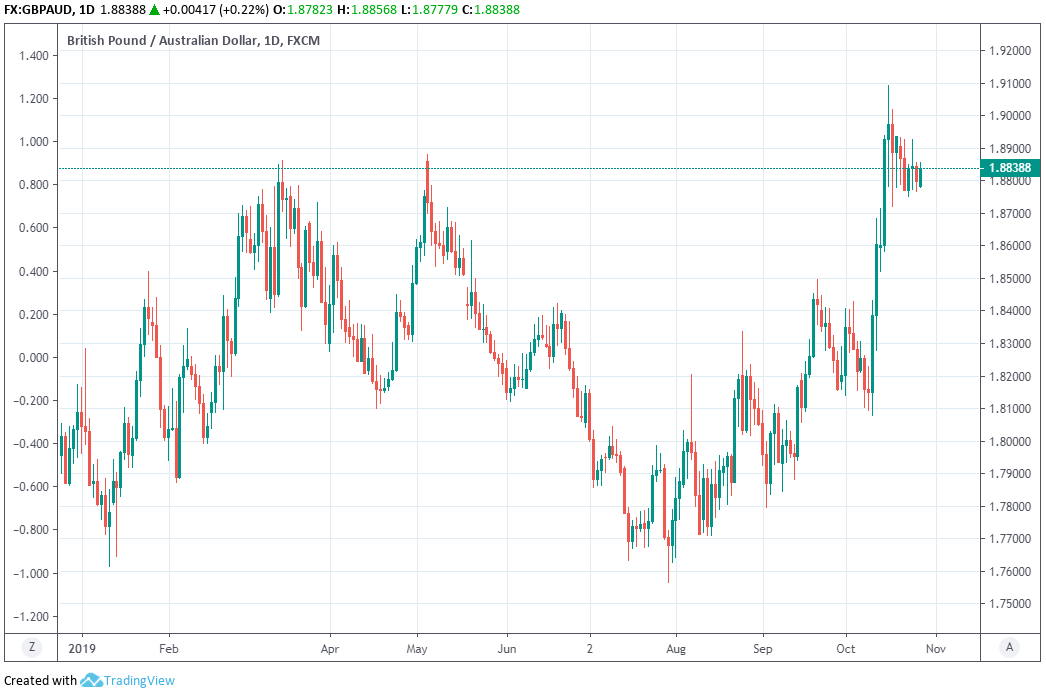 "We don’t expect AUD/USD to make fresh cyclical lows. AUD has tried to close in New York below 0.6700 five times but has not been able to do so. It requires a larger catalyst. RBA Governor Phil Lowe speaks tomorrow morning (6:45am London time). Lowe’s comments are unlikely to be the catalyst on this occasion," says CBA's Mundy.

The RBA is cutting rates in an attempt to lift Australian growth and inflation because the consumer price index has been below the lower boundary of the 2%-to-3% target for years now and economists forecast that data out this will reveal another quarter of subpar price pressures. Consensus is looking for inflation to have risen at an annualised pace of 1.7% in the third quarter.

The overnight-index-swap market implied on Monday, a November 05 cash rate of 0.69%, below the current 0.75% but not by much. The market-implied rate for December 03 was 0.61% Monday and the February 04 rate was 0.55%. Anything that causes these numbers to fall, whether inflation figures, speeches from central bankers or anything else, will also lead the Aussie lower.

"We think it will be enough to cement expectations that the RBA will stay put in November," says Francesco Pesole, a strategist at ING, of the inflation data. "This should ultimately translate in some support for the Aussie dollar, that will inevitably remain strictly dependent on the Brexit and trade talks dynamics, but may attract more interest from investors if an RBA cut is ruled out for now. AUD/USD should consolidate in the upper half of the 0.68 area."