- Domestic fundamentals to dominate over the next year.

- Losses seen in short-term with recovery coming in 2020.

The Australian Dollar is being tipped for more short-term downside by traders at investment bank UBS, while analysts at the Swiss banking and wealth management powerhouse are tipping a 2020 recovery for the antipodean currency.

The analysts have drawn their insights from fundamentals that impact the value of the Aussie over the medium-to-longer-term while traders are predominantly concerned with short-term changes in sentiment and market positioning.

"AUD and NZD are finally showing some signs of weakness, after enjoying a fairly prolonged period of relief. Most of the relief has likely come from better sentiment towards the US-China trade negotiations. I expect market positioning to be relatively long at the moment and see further room to the downside, particularly in AUD," says Dabiel Jakobsson, a spot FX trader at UBS.

President Donald Trump on October 11 said a 'phase one' agreement with China was nearing, which gave the Australian Dollar a fresh lease of life with gains subsequently fuelled by rare signs of progress in the long and ongoing Brexit saga, which were seen further reducing the economic risks buffeting the European continent and to a lesser extent, the global economy.

But the UK is now widely seen as heading for a divisive and potentially damaging general election while terms of the fledgling ceasefire between the U.S. and China are yet to make it onto paper, much less ratified in a formal manner. And with risk assets like the Aussie having rallied for almost a fortnight, and with safe-havens like the Dollar and Yen having fallen concurrently, the risk-on mood in financial markets could now be on the verge of souring once again.

This could leave the Australian Dollar exposed in the short-term. 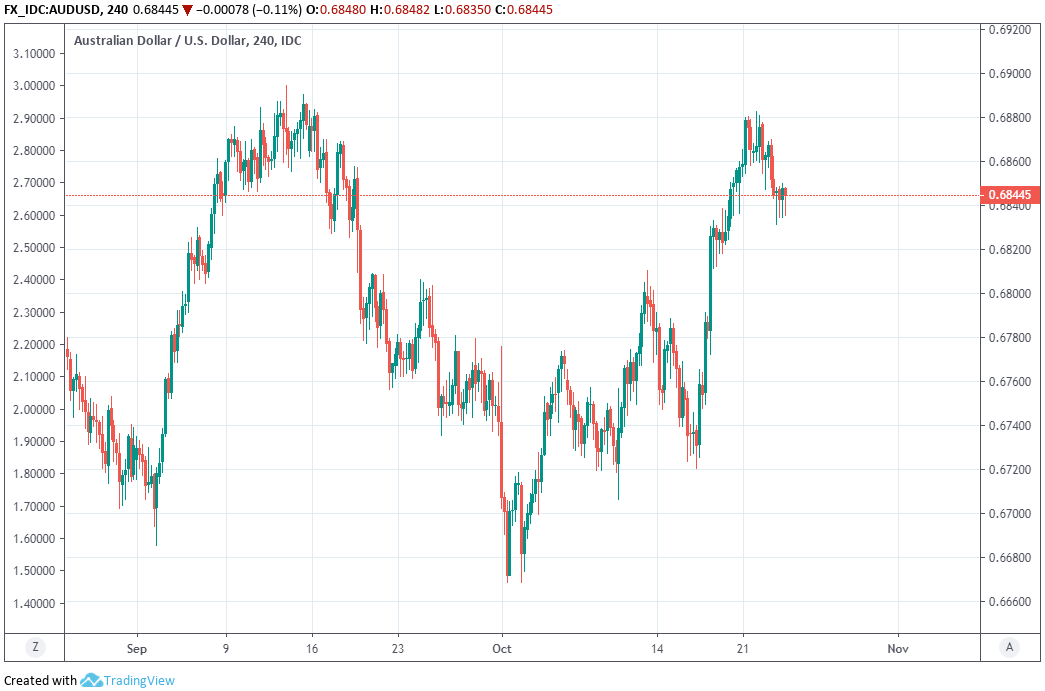 However, it's not only the external environment that will influence the currency going forward, analysts say market focus could increasingly turn to the domestic Australian economy.

"AUD is now likely to be driven more by the domestic economic outlook and relative monetary policy trends and less by the global risk factors such as equities. Our expectations are for the RBA to remain dovish but we also expect a deep cutting cycle from the Fed. Along with a gradual upturn in global growth this should lead to a rebound in AUD/USD next year," says Vassili Serebriakov, a strategist at UBS, in a research note.

The UBS analyst team is also looking for the Australian Dollar to hand some of its recently recovered ground back to the U.S. greenback in the month ahead, with their one-month forecast sitting at 0.6733, which is below Wednesday's 0.6844 level. 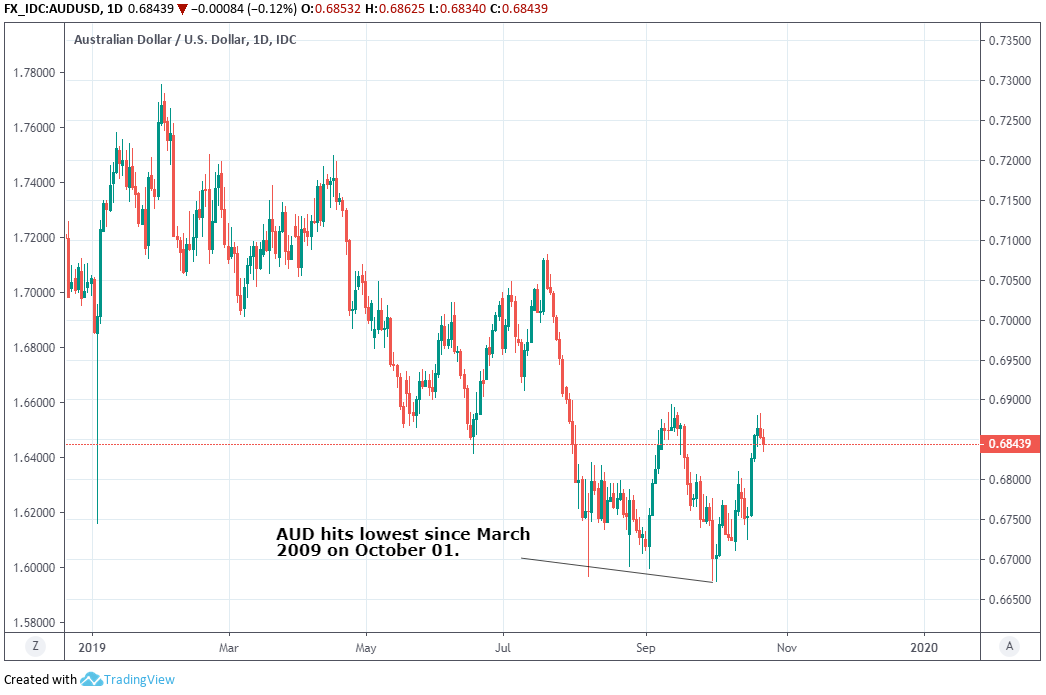 Serebriakov says the U.S.-China trade war, and its impact on global stock markets, will continue to fade as a driver of the Aussie in the months ahead and the relative difference in interest rates will reassert its once weighty influence on the currency again. A falling correlation with iron prices, as well as the 'internationalisation' of the Chinese Renminbi, is also said make the Aussie less of a China story and more of a domestic one.

The AUD/USD rate has fallen 3% in 2019 and by 7.4% since the end of June 2018, mostly due to the trade war and the impact it's had on the outlook for Australia's economy but that tariff fight is also now ruffling feathers at the Federal Reserve (Fed). The Fed has cut rates twice this year and is expected to do so again on Wednesday, 30 October, before following up with even further cuts once into the new year.

Serebriakov says the looming Fed rate cuts should turn the AUD/USD table in favour of Aussie, with the exchange rate tipped to recover from its one-month target of 0.6733 to 0.69 within 12 months, while the Pound-to-Aussie rate is forecast to fall from 1.8821 Thursday to 1.8152 by October 2020. But other forecasters at Commerzbank, although also drawing their insights from the bilateral interest rate outlook, have a different view on the outlook. 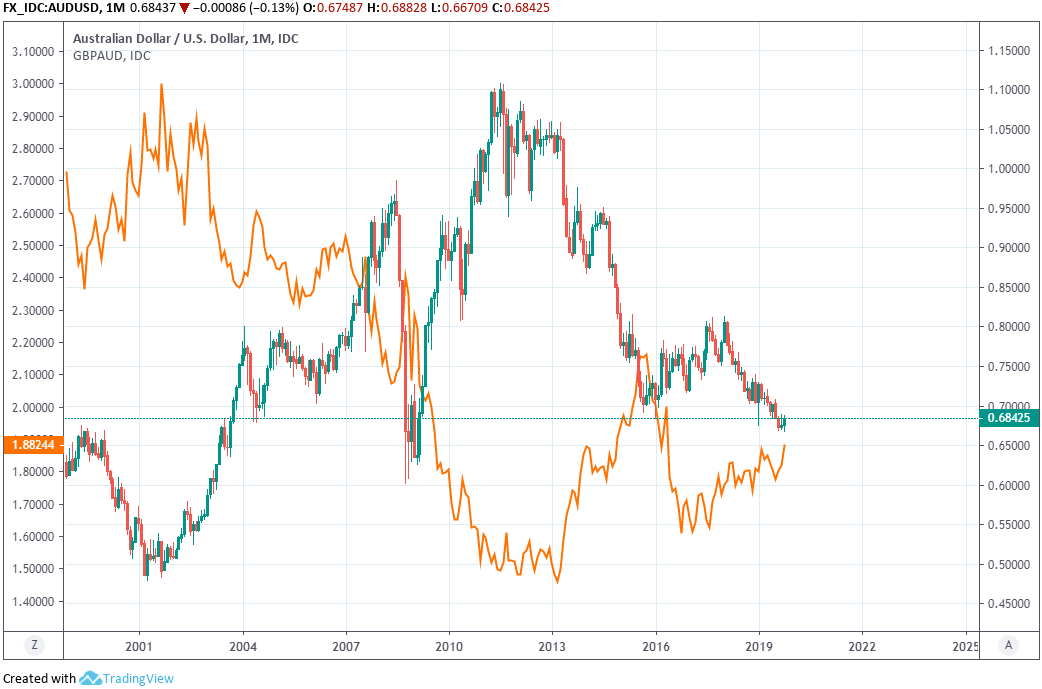 "The RBA remains on alert, which remains justified given the continuing downside risks from the trade war and the expansionary monetary policies of central banks worldwide," says Elisabeth Andreae, an analyst at Commerzbank. "We see the risk of further rate cuts in the short term. Accordingly, the Australian dollar is likely to remain on the defensive for the time being, which is why we expect the downward trend in AUD/USD to continue for now."

Andreae anticipates the Fed will cut U.S. rates twice more, leaving the Fed Funds rate at 1.5%, while the Reserve Bank of Australia (RBA) is expected to reduce its own cash rate to 0.50%.

That would ensure the current 1% interest rate differential remains constant between the U.S. and Australia, which is an argument for more downside in the AUD/USD rate given the German lender also sees the greenback continuing to benefit from safe haven demand over the coming quarters.

"We currently expect the RBA to ease its monetary policy to a similar extent as the Fed does. However, the US dollar has recently benefited from its status as a safe haven, so that the Fed's rate cuts have not yet triggered US dollar weakness," Andreae says, in a review of Commerzbank's forecasts. "We do not expect this until next year, as we assume global uncertainty will continue for the time being despite a temporary easing in the trade conflict and that demand for AUD will remain subdued as a result."