- But AUD seen headed for resistance on charts.

- And RBA still tipped to cut again in near future.

The Australian Dollar got the better of all major rivals Thursday after official figures revealed surprise fall in the unemployment rate, which led investors to pare back their bets on a November rate cut from the Reserve Bank of Australia (RBA), although analysts say the antipodean unit could soon run out of road.

Australia's economy created 14.7k new jobs last month, down from an upwardly-revised 37.9k in August and slightly below the 15.3k the market had been looking, but the miss against consensus didn't prevent the unemployment rate from falling 10 basis points to 5.2%.

The jobless figure is still up from the 4.9% that prevailed back in February and also remains a long way off what the RBA considers to be the optimum level but the upside surprise gave markets a reason to cheer Thursday.

"AUD/USD of course popped higher on the data but its price action has been underwhelming. Despite A$ often seeming to be the preferred proxy for the US-China trade war, it sits at #6 within the G10 over the week, up just 0.4%," says Sean Callow, a strategist at Westpac. "Our modestly bearish DXY view short term should help, with scope for 0.6825/50. But any probes in the 0.6850/0.6900 area would be tempting for structural short positions."

Markets care about the labour market data because falling unemployment and improving job creation are thought to put upward pressure on wages. Pay growth leads to increased demand in an economy and upward pressure on inflation, with implications for interest rates and exchange rates. 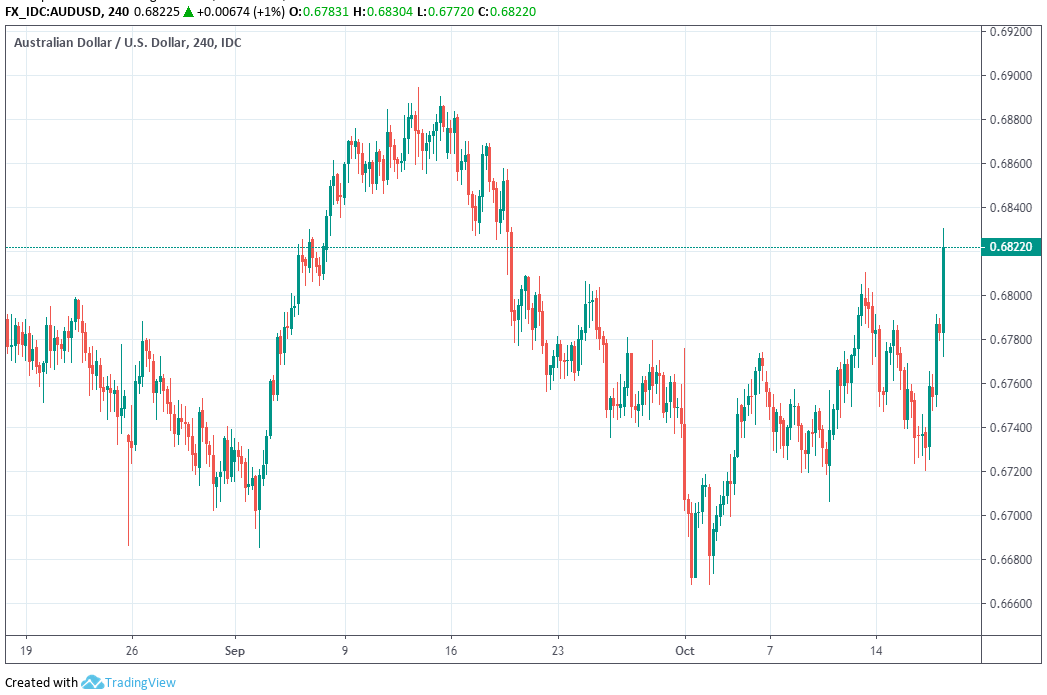 The jobs market has become an increasingly key driver of RBA decisions this year, with the bank initially saying a sustained increase in unemployment would prompt it to cut rates before hinting earlier this month that it could now continue cutting until it achieves 'full employment', a hypothetical rate thought to be necessary for the generation of upward wage and inflation pressures.

The RBA has cut its interest rate three times this year, leaving the cash rate at 0.75% in October, as part of an effort to lift growth and inflation. For years the bank had sat patiently waiting for the consumer price index to rise into the 2%-to-3% target band but an economic slowdown that took hold in the middle of 2018 has since forced the RBA into action. The U.S.-China trade war, which has weighed on the global economy, has also been a factor for the RBA.

"It is a welcome development for the RBA although the unemployment rate still remains uncomfortably above their estimate of “full employment” at 4.5%," says Fritz Louw, a currency analyst at MUFG. "We still expect one more cut this year. Leading indicators for the labour market are signalling that employment growth is likely to slow and the unemployment rate is already too high. RBA easing expectations are expected to remain a weight on the Aussie."

Louw says Thursday's data has prompted some investors to reduce their bets that the RBA will cut rates for a fourth time in early November, but he and the MUFG team are still looking for another cut this year, either in November or December. They say RBA rate policy is one of the reasons behind the Australian Dollar's underwhelming move since last Friday, when the White House claimed it'd reached a deal with China that addresses several issues in the trade war.

Pricing in the overnight-index-swap market implied on Thursday, a November 05 cash rate of 0.69%, which is below the current 0.75% but up from the 0.64% that prevailed earlier in the week. It's also an increasingly long way off where it would be if the RBA cut the benchmark by a further 25 basis points. The rate implied for December 03 was 0.59%, up from 55% earlier this week and still above the threshold that would prevail following an additional cut.

"GBP and UK yields have risen soundly this week as potential for some form of deal increased. Despite continuing concerns, deal approval remains the most likely outcome so GBP should continue to push higher," says Tim Riddell, a London-based Westpac colleague of Callow's. 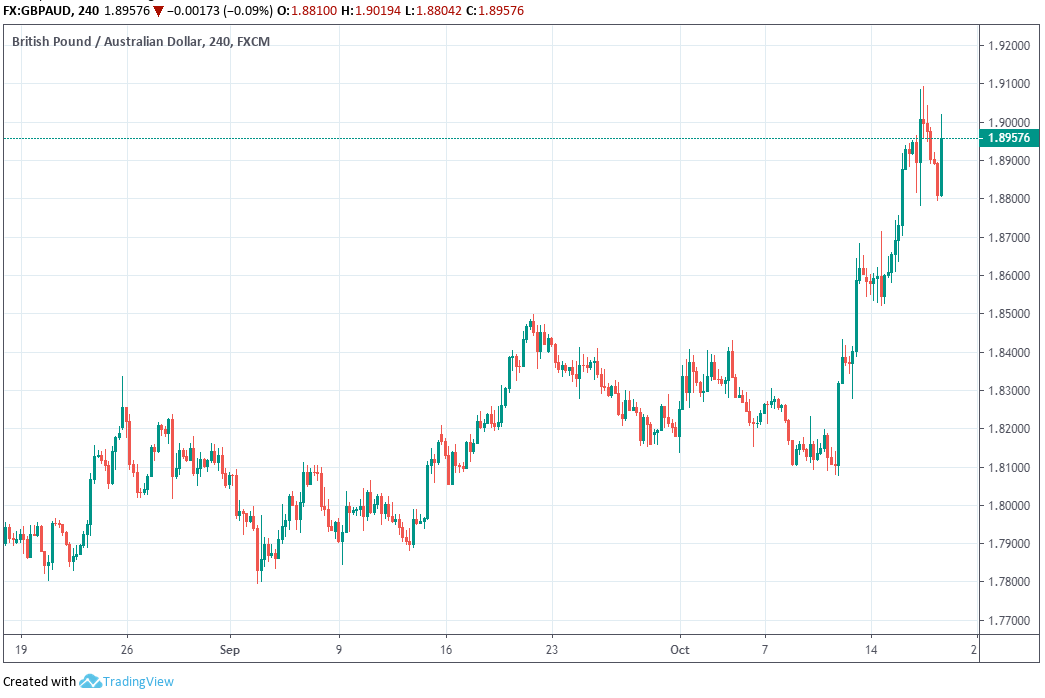 Australia's Dollar was top of the class on Thursday but for the week overall the beg winner is Pound Sterling, which has risen more than 2% against every one of its major rivals in recent days and is up by 2.8% relative to the Aussie and an even larger 3.8% against the safe-haven Japanese Yen.

London and Brussels both claimed to have reached a Brexit deal Thursday. Prime Minister Boris Johnson has agreed what is indicated to be a modestly different version of his predecessor's withdrawal agreement with the EU ahead of a summit that many hope will produce a formal declaration that an agreement has been struck.

"In a statement released this morning, the DUP stated that “as things stand, we could not support what is being suggested on customs and consent issues and there is a lack of clarity on value added tax”. Without the DUP’s backing it will be a lot more difficult for Boris Johnson to pass his Brexit deal through parliament which would then favour an early election to break the parliamentary deadlock," says Lee Hardman, an MUFG colleague of Louw's.

Johnson is still working against a deadline of Saturday 19, which is the date that the 'Benn Act' says he must request a third Brexit delay from the EU if an agreement has not been ratified by both chambers of the UK parliament.

There's almost no chance of any agreement being ratified in both houses of parliament by then, which could mean a Brexit delay is in the pipeline regardless of what MPs in a highly divided parliament ultimately think of the deal produced, the text of which is not yet available.