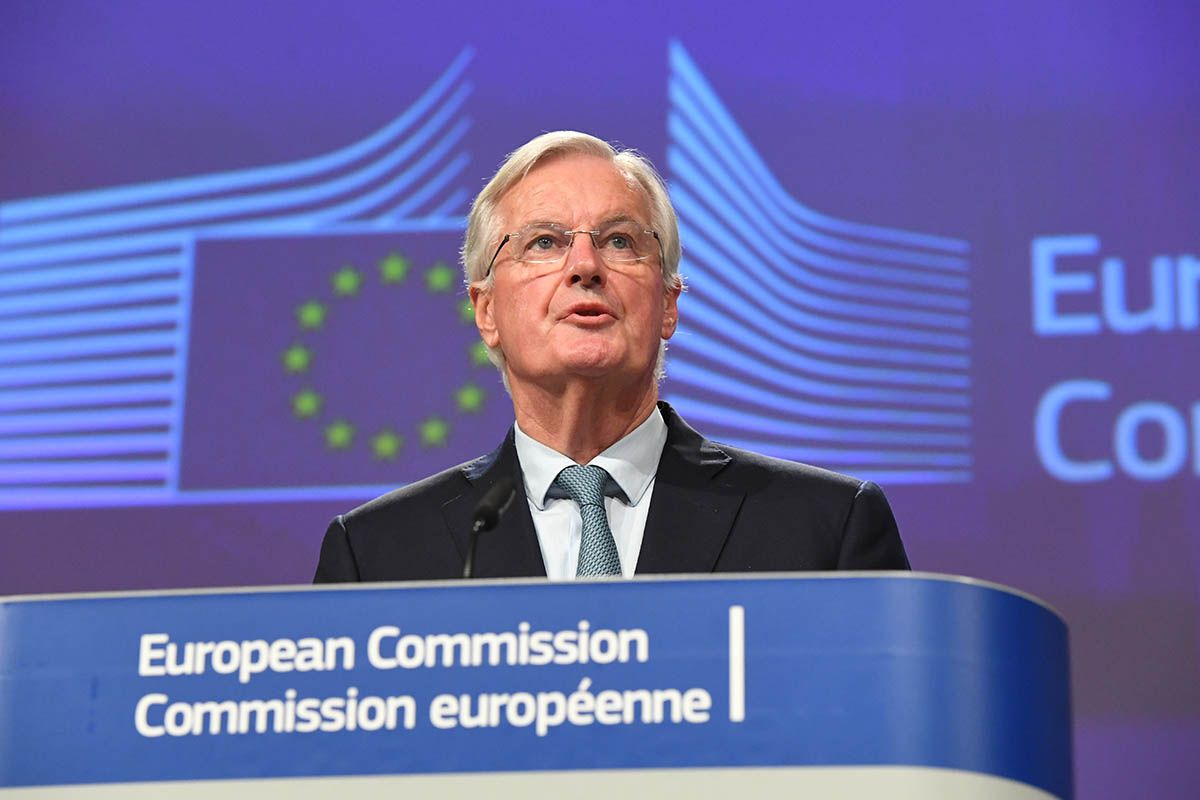 Pound Sterling rallied after the EU and UK finally sealed a Brexit deal, but the currency subsequently sunk again as it dawned on foreign exchange markets the deal will be dead on arrival at Westminster.

Impressive gains soon turned to dust after market focus quickly swung from Brussels to London where reactions by MPs suggested Prime Minister Boris Johnson will be unable to secure the numbers required to pass the deal.

Driving the losses was the firm refusal by the DUP - the Government's Northern Ireland unionist partners - to back the deal. In fact, so opposed are they to the new deal they have indicated they will vote against it, as opposed to merely abstain.

The refusal by the DUP to back the deal will mean some Conservative Brexit 'purists' will refuse to vote with their Government and pass the deal.

In a statement, the DUP said: "These proposals are not, in our view, beneficial to the economic well-being of Northern Ireland and they undermine the integrity of the Union."

"Saturday's vote in Parliament on the proposals will only be the start of a long process to get any Withdrawal Agreement Bill through the House of Commons."

Indeed, Parliament on Saturday will hold a Meaningful Vote - it's fourth on a Brexit deal. Only once this has been passed will MPs then vote on the Withdrawal Agreement Bill which would enact the UK's exit from the EU.

The third Meaningful Vote was defeated by 58 votes on 29 March 2019, highlighting just how much work the Government would need to do to bring about the kind of swing that would see the Brexit deal pass.

"Arithmetically this means that a net 30 MPs are required to switch to the government for the motion to be carried. The situation though in practice is more complex given the composition in the Commons has changed given defections, whip withdrawals and a by-election," says Philip Shaw, an economist at Investec.

"We’ve been here before," says John Goldie, FX Dealer at Argentex Group plc. "Boris has achieved what May couldn’t in getting the EU to amend the text of the agreement, but May’s team had achieved a deal herself previously. The issue was it couldn’t get through Parliament. On multiple occasions. The DUP statement said this morning that they would not support the deal and fresh after Juncker confirmed 'where there’s a will there’s a deal' the DUP reconfirmed that their position was unchanged."

"Either Boris believes that he can convince them, or that he can do it without them – on either point I am yet to be convinced," adds Goldie. 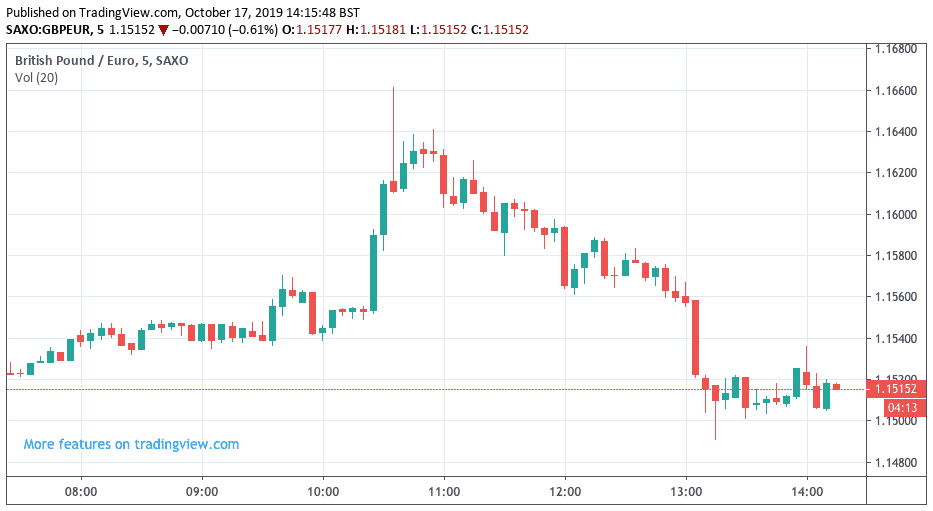 Prime Minister Johnson now has to present his deal to a highly partisan and factured Parliament where any majority for a Brexit deal will come down to a handful of votes.

"If the House of Commons vote in favour of the deal, GBP/USD can rally towards 1.3500 over the medium term because the risk of a hard Brexit on 31 October would be avoided and the UK will enter a 21‑month transition period to facilitate an orderly withdrawal from the EU," says Elias Haddad, a foreign exchange strategist with CBA.

It is hard to see it passing without the support of the DUP, and we feel the currency forecasts of greater relevance will be those that anticipate the deal failing.

"All eyes now will be on the detail and whether it has the legs to get through UK lawmakers. If so we expect to see the pound push another leg higher and target 1.35 against the dollar in the near term. If it fails, like snakes and ladders it will be a sharp move lower," says Phil McHugh, Chief Market Analyst at Currencies Direct.

Readers should therefore not be surprised if the Pound does a sharp reversal lower over coming days.

Other analysts reckon Sterling has some decent downside protection going forward, as a Brexit delay is nearly all but inevitable.

Even in the event that a deal fails to pass through Parliament, CBA's Haddad believes Sterling should remain relatively well supported.

"GBP/USD will trade firmly and stabilise around 1.2800 if Johnson fails to get a majority in the UK House of Commons because the risk of a disorderly no‑deal Brexit next year will be low. Johnson will probably use the Brexit deal reached with the EU as the Conservative’s Brexit platform instead of campaigning on a hard‑Brexit platform in upcoming general elections," says the strategist.

"We’ve got a great new deal that takes back control - now Parliament should get Brexit done on Saturday so we can move on to other priorities like the cost of living, the NHS, violent crime and our environment," said Prime Minister Boris Johnson, confirming a deal had been reached.

In a letter to EU leaders, President of the European Commission Jean-Claude Juncker says:

"The negotiators reached an agreement on a revised Protocol on Ireland/Northern Ireland and on a revised Political Declaration on 17 October 2019. Both were endorsed by the European Commission. The Prime Minister of the United Kingdom also signalled his approval of these documents to me today."

The Pound rallied in relief, with Sterling turning deficits against all the major currencies into sizeable gains. The Pound-to-Euro exchange rate was at one stage quoted at 1.1626, the Pound-to-Dollar exchange rate went as high as 1.2928.

The EU's lead negotiator Michel Barnier has said "we have accepted that we remove the backstop and we replace it with a different approach out that they have replaced the backstop."

"The anti-democratic backstop has been abolished. The people of Northern Ireland will be in charge of the laws that they live by, and – unlike the backstop – will have the right to end the special arrangement if they so choose," says Johnson on Twitter, in a clear attempt to change the DUP's mind.

The details pertaining to Northern Ireland are that it will be part of the UK customs union while also adhering to EU customs standards. This would ensure no border is required on the island of Ireland. Customs checks are carried out between the UK and EU, and rebates for Northern Ireland-Britain goods trade are issued.

In four years, the Northern Ireland Assembly will decide by simple majority on whether to continue applying EU rules.

However, the Government's original plans saw the customs agreement last four years, after which it would require the DUP's consent for the agreement to roll over.

This was essentially a veto and was what the DUP were after. 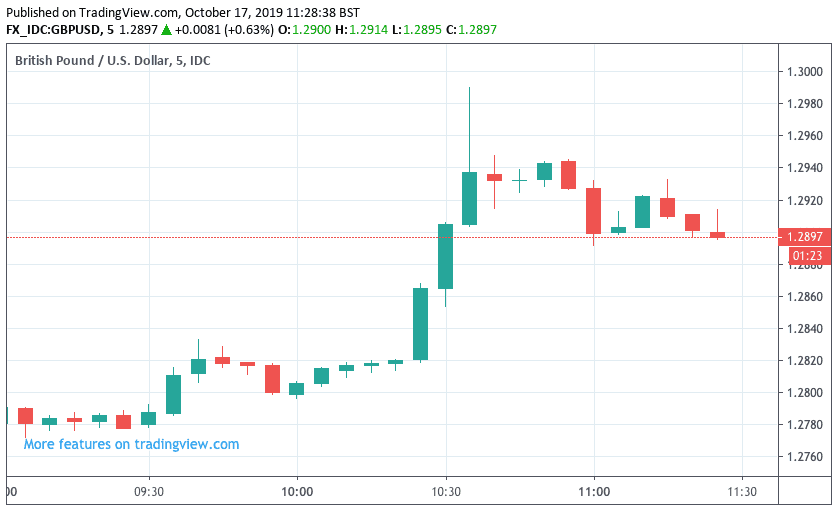 Above: GBP/USD spikes, but scepticism on a deal passing through parliament should keep the Pound in check