- AUD retreats in risk-off market and amid angst over RBA.

- As doubts over U.S.-China truce continue to rattle investors.

- AUD tipped for losses, is a sell at UBS, on multiple factors.

The Australian Dollar underperformed major rivals Tuesday after being buffeted by adverse international and domestic newsflow although the antipodean unit is still being tipped as a sell by analysts at a major bank, who're forecasting a new low for the Aussie by year-end.

Australia's Dollar was on the back foot Tuesday as markets expressed further doubts about the trade accord struck between the U.S. and China last week, while also digesting minutes of the latest Reserve Bank of Australia (RBA) meeting. The gloomy international mood, combined with fresh speculation that a Brexit deal could be reached within weeks, lifted the Pound-to-Aussie rate sharply while driving the AUD/USD rate back further from recent highs.

"Markets continue to digest the recent news flow focusing on the hopes for uncertainty and some deals related to Brexit and US/China trade. The latter remains more important for global developments, though it seems consistent with expectations. It's a pause in the trade wars, but risk markets need a reversal of existing tariffs and a signal that the Dec ones will get scrapped," says Mark McCormick, head of FX strategy at TD Securities. 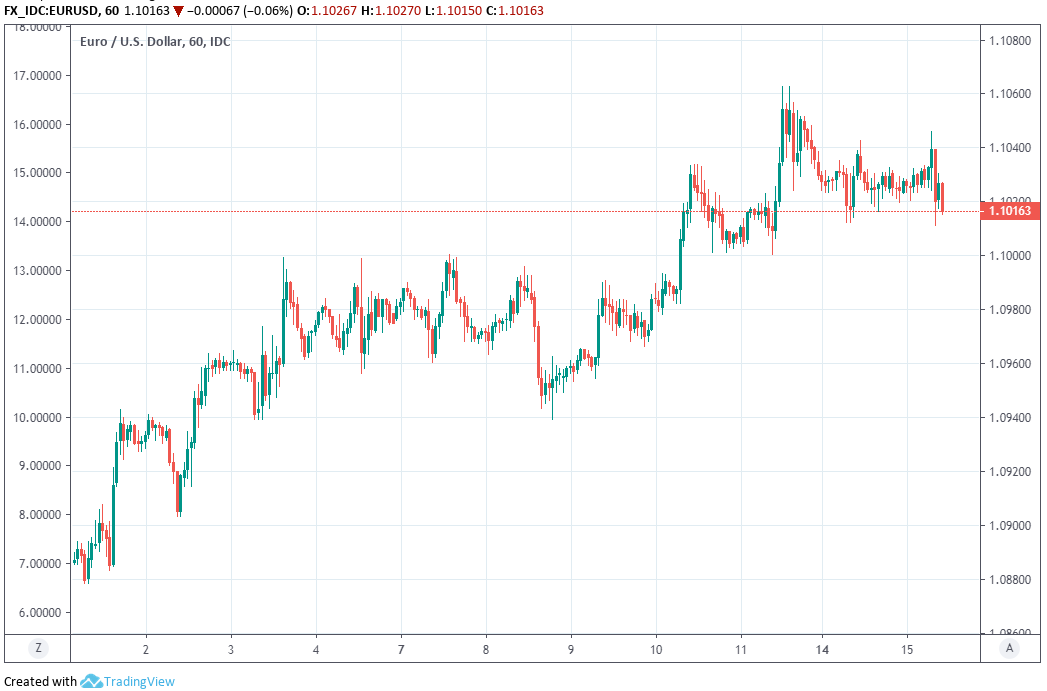 China is reportedly reluctant to put pen to paper on an agreement struck with President Donald Trump last week unless he agrees to cancel another tariff increase still planned for December 15, which will see all of the country's remaining exports to the U.S. hit with a new 15% levy if not averted. The U.S. tariff on $250 bn of imports from China was due to rise from 25% to 30% Tuesday until a deal struck last week led the increase to be abandoned.

President Donald Trump said he'd reached a deal with Chinese Vice Premier Liu He that covers intellectual property protections and currency manipulation, but that also offers U.S. banks access to the large and coveted Chinese market for financial services. However, it will take as long as five weeks to get the terms written up nothing is expected to be signed before the Asia-Pacific Economic Cooperation summit in November.

Both sides have agreed ceasefires and other forms of truce in the past, only for them to fall apart within weeks, which is why markets have spent the last two consecutive session unwinding the risk-on moves seen late last week. But it's only part of the reason why the Aussie has been on the back foot.

"The October minutes suggest the RBA does not think that an immediate follow-up rate cut is necessarily required. For now, we are sticking with our expectation that the next rate cut will be in early 2020 rather than before the end of this year. That is not to say that the Bank won’t move in November," says David Plank, head of Australian economics at ANZ. "Importantly, the Minutes suggest the RBA is not inclined to keep rate cuts in reserve for the sake of it." 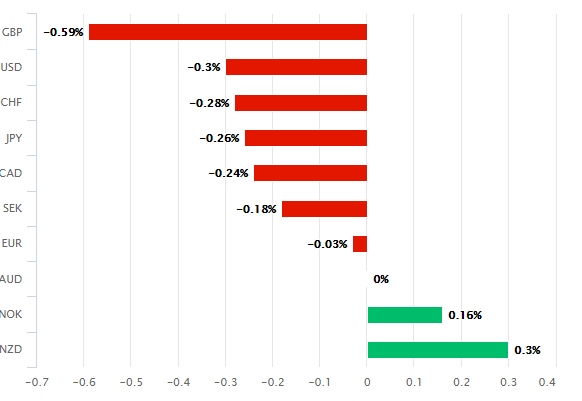 Minutes of the RBA's October meeting, which saw policymakers agree to cut the cash rate from 1% to 0.75%, appeared to suggest on Tuesday that rate setters felt a back-to-back cut to the cash rate would be unnecessary after the bank already cut on two consecutive occasions in May and June. Minutes show the board agreed it'd be "prepared" to cut rates again if economic data suggests another move is needed over the coming weeks, which is a lesser commitment than the previous claim the board "would" cut rates again if necessary.

ANZ's Plank says the minutes suggest the RBA might want to wait a few months, regardless of what Australian economic data suggests in the weeks ahead, before cutting Aussie interest rates for what would then be a fourth time. However, Plank also observes that the minutes make clear the RBA sees little value in eschewing rate cuts simply to save monetary ammunition for a later date, which could mean it's potentially willing to cut rates all the way to zero if such a move is perceived as necessary.

"We remain moderately bearish on the outlook for AUD/USD. Although some of the domestic negatives look to be already priced into the AUD we think that four factors are likely to keep it under pressure in the near term ," says Giulia Specchia, a strategist at UBS, in a note sent to clients late last week. "Barring a major break-through at next week's negotiations (not our base case), we would view any strength in the AUD as an opportunity to reset shorts; especially vs safe-haven currencies."

UBS' Specchia says the Aussie will be especially vulnerable to the Swiss Franc and Japanese Yen in the months ahead but also forecasts it will cede ground to the U.S. Dollar, with the AUD/USD rate tipped to end the year down at 0.6600. She cites multiple factors ranging from an anticipated decline in iron prices and a strong U.S. Dollar, to continued market unease over the trade war as well as the prospect of further RBA rate cuts. 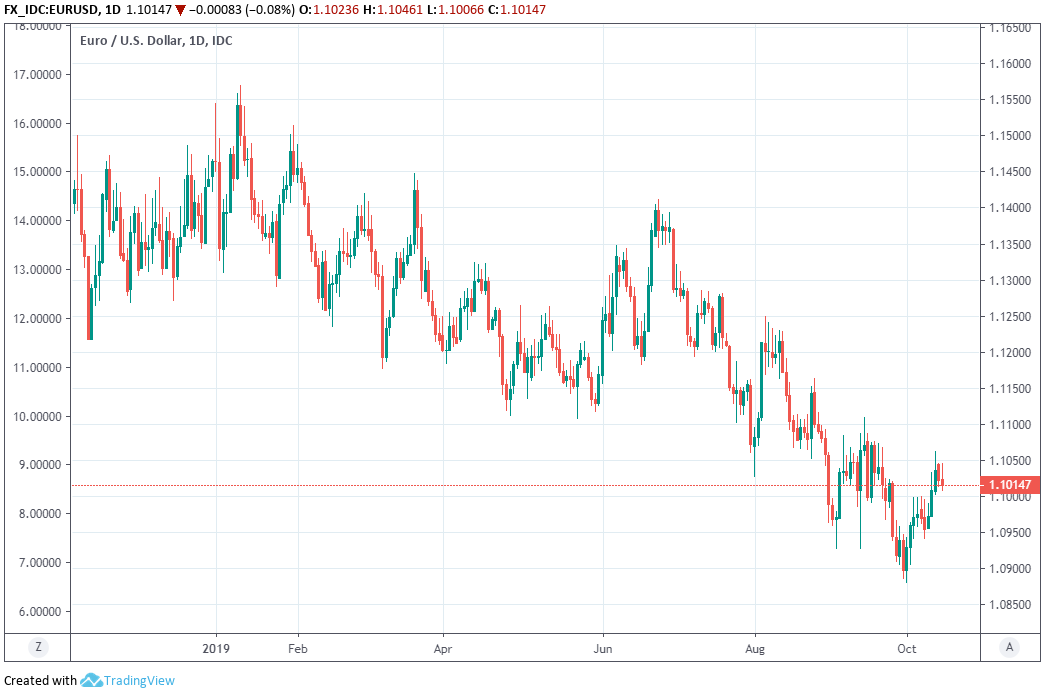 Unlike Plank, who's looking for the next cut in February 2020, Specchia is forecasting the RBA will slash the cash rate to 0.5% next month before following up with a cut to 0.25% in May 2020. The RBA has already cut rates three times in 2019 in an effort to lift Australian growth and inflation, which has weighed on the Aussie, but UBS's forecasts are more bad news for the currency because markets are unprepared for that level of cuts quite so soon.

Pricing in the overnight-index-swap market implied on Tuesday, a November 05 cash rate of 0.64%, which is below the current 0.75% but a long way off where it would be if the RBA cut the benchmark by a further 25 basis points. The rate implied for December 03 was just 0.55%, but still above the threshold that would prevail following an additional cut. Any move to fully price-in another 2019 cut would weigh on the Aussie and any cut delivered, but not already priced, would also drag the currency lower.

"Global weakness is likely to prompt the RBA to turn increasingly more dovish. Adding to that, while the housing sector seems to be recovering, domestic spare capacity remains elevated – with the unemployment rate up to 5.3% vs RBA's NAIRU estimate of 4.4%. Somewhat concerning, leading indicators for the labour market suggest employment growth should slow over the coming months," Specchia says. "As the RBA cuts and talks of QE intensify, we think that the AUD should retain a bearish bias."