- Aussie to be moved by employment and Chinese data

The GBP/AUD exchange rate is trading at around 1.8593 at the start of the new week after rising 2.14% in the week before. The pair is rising within an ascending channel and the uptrend is expected to continue, at least from a technical perspective.

Sterling will remain volatile this week as Brexit negotiations with the EU reach their day of reckoning: by Thursday we will know if the EU and UK are able to strike a revised deal. This deal should then be put before the House of Commons on Saturday.

If the deal should fail at either of these two stages Sterling will be at risk of declines against the Aussie Dollar. However, the successful passing of a deal opens up Sterling to further gains, which will likely reinforce GBP/AUD's technical uptrend.

The 4 hour chart - used to determine the short-term outlook, which includes the coming week or next 5 days - shows how the pair rose steeply from the October 10 lows. 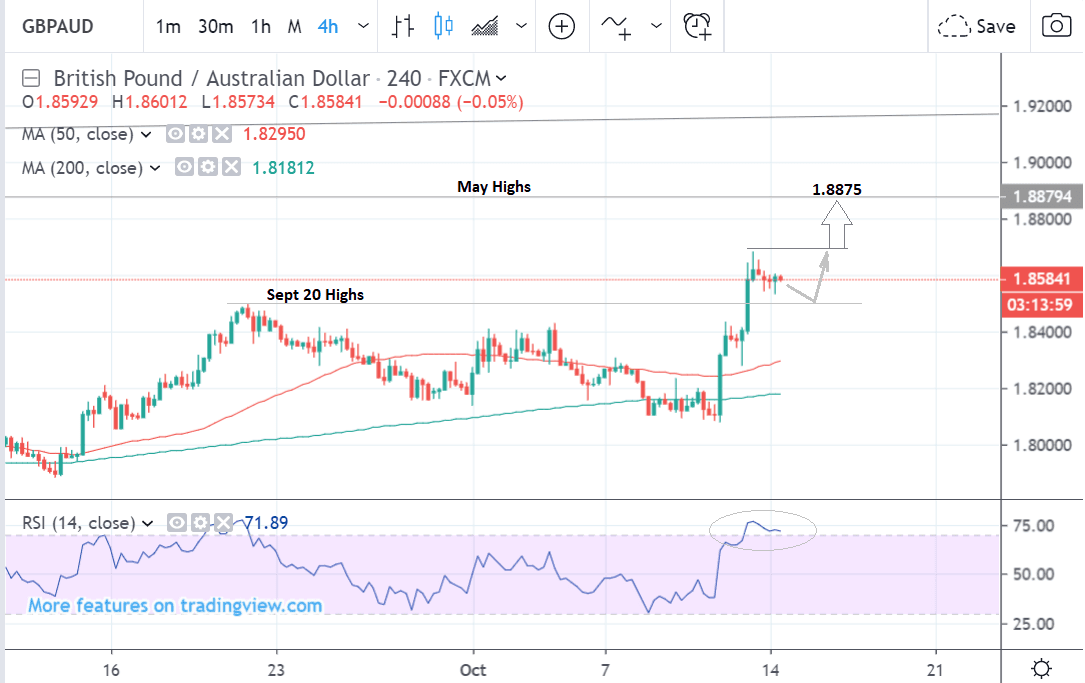 The sharp reversal higher and break above the September 20 highs was a bullish sign which suggests further upside to come.

A break above the 1.8681 highs would provide the greenlight for a continuation higher to a target at 1.8875 and the May highs.

The RSI momentum indicator is in the overbought zone, however, which indicates the pair may pull-back or trade sideways.

This could mean the pair corrects back - perhaps to the September 20 highs - before resuming its uptrend.

The daily chart shows how the pair has been steadily rising in peaks and troughs higher since the July 30 lows, and how this uptrend has actually accelerated recently. 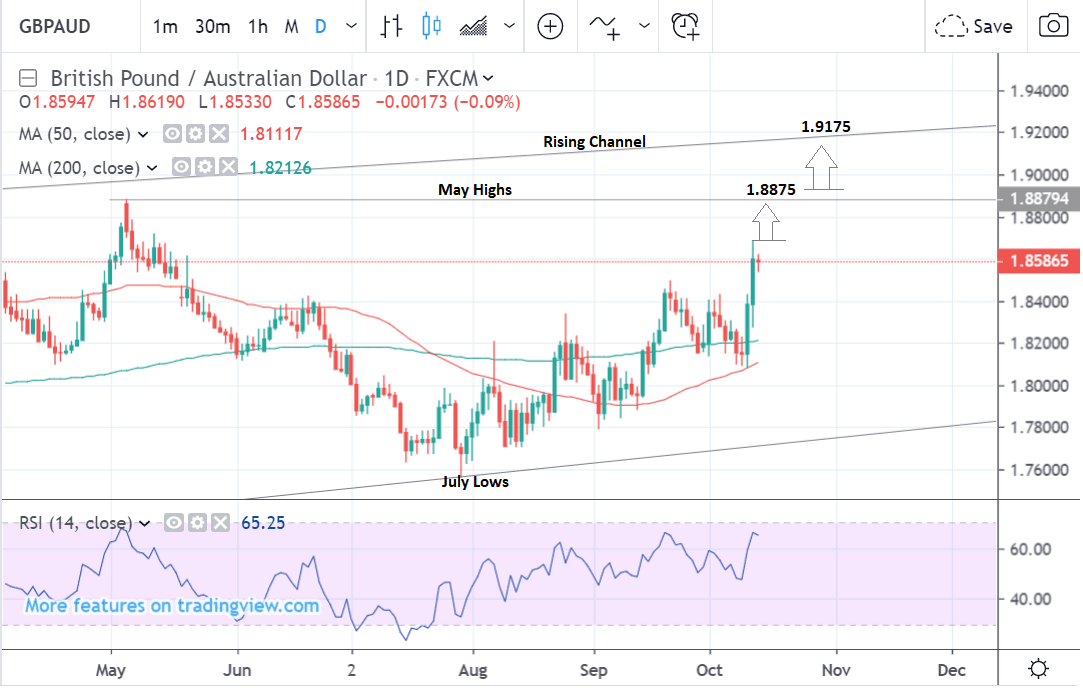 Given the old adage that ‘the trend is your friend’ this uptrend is biased to continue.

A break above the current 1.8681 highs would confirm a continuation to a target at 1.8875 and the May highs, as stated on the analysis of the 4hr time frame.

A further break above the May highs would then also open the way to an ultimate target at 1.9175 and the top of the rising channel.

The weekly chart shows a wide-angle picture of the same scenario. 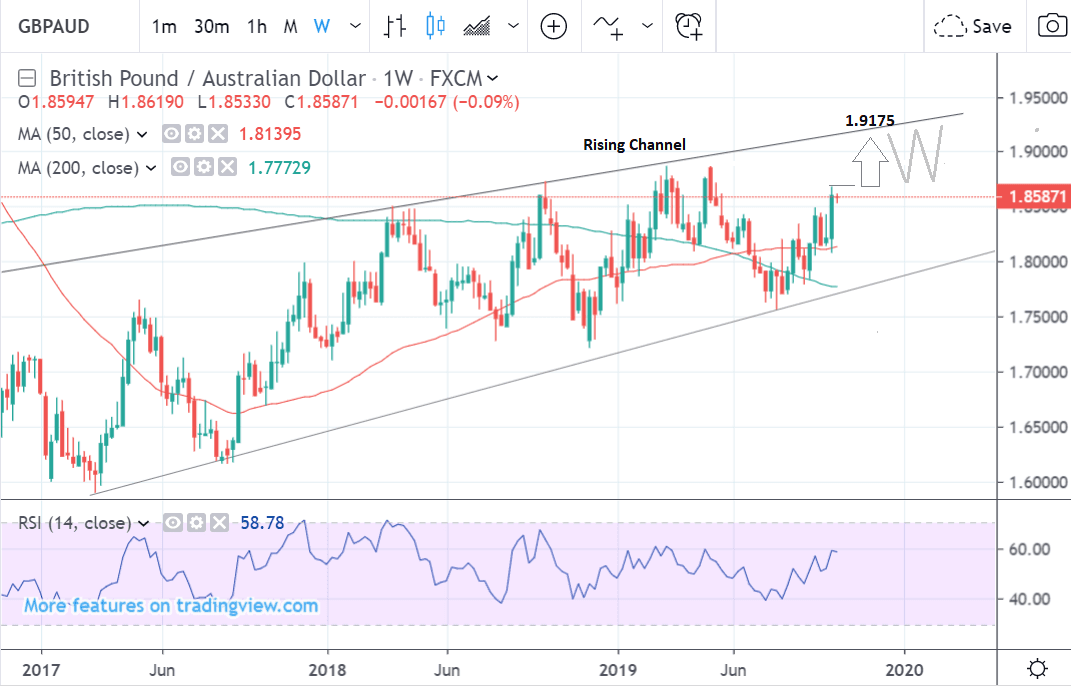 As on the daily chart, it shows the pair in an uptrend which will probably continue to an eventual target at the upper channel line and 1.9175.

The pair has now also broken clearly above the 50 and 200-week moving averages (MA), a further bullish indication.

The top of the channel will probably present tough resistance to the exchange rate and cap further gains, and we see the pair most likely pulling back from the level and consolidating in a sideways trend over the forecast period.

The main drivers of the Australian Dollar in the short-term are likely to be Australian employment data, the Reserve Bank of Australia (RBA) minutes and Chinese GDP data at the back end of the week.

Australian employment data is expected to show gross employment (both full and part-time) rise by a consensus 15k in September from 34.7k in August, when it is released at 1.30 BST on Thursday.

Although August showed high gains these were almost entirely due to an increase in part-time hiring which is not viewed as positively as full-time - indeed full-time positions fell.

The unemployment rate is forecast to stay at 5.3% in September when it is released at the same time, which would be a market-neutral for AUD.

The RBA have said they want to see the unemployment rate fall substantially lower to between 5.0% and 4.5% before considering the economy meeting the criteria for ‘full-employment’ and until it does there continues to be a risk of more monetary stimulus which would be negative for the Aussie.

The minutes from the last RBA meeting on October 1 are out on Tuesday at 1.30 and are likely to increase expectations of more monetary policy easing or stimulus, with a risk the news could be negative for the Aussie.

“The minutes from the RBA’s last board meeting are expected to be dovish and repeat that the RBA will ease monetary policy again if needed to support growth, full employment and the inflation target,” says Dr. Shane Oliver, chief economist at AMP Capital.

The Australian Dollar could also be impacted by Chinese growth data for Q3 out on Friday, which is forecast to show GDP rise 6.1% year-on-year (YoY) in Q3 compared to a year ago when released at 3.00.

This would represent a slowdown from the 6.2% of the previous quarter. Any deeper contraction would raise concerns about the Chinese economy which would probably drag the Aussie down too, since China is Australia’s main trading partner.

The data will, however, be viewed in a more benign light as a result of the trade detente between the U.S. and China agreed last week, which saw the U.S. hold back from imposing higher tariffs on $250bn of Chinese imports in exchange for China lifting a ban on importing U.S. agricultural products.