The Australian Dollar slipped Wednesday in response to vulnerabilities that could see it fall even further in the final half of the week, according to some analysts, with a confluence of factors seen barring the Aussie's path higher.

Australia's Dollar was close to the bottom of the developed world pack as markets bid the U.S. Dollar higher ahead of the latest interest rate decision from the Federal Reserve (Fed), which is tipped as a risk to the Aussie.

"AUD/USD could be volatile over the next 24 hours," warns Elias Haddad, a strategist at Commonwealth Bank of Australia. "We expect the FOMC to cut the Funds rate by 25bp but to provide few hints of future cuts to the Funds rate in its ‘dot plot’. That may support the USD, and undermine AUD/USD."

The Fed is widely expected to cut U.S. rates from 2.25% to 2% but investors are also looking for it to confirm they are right to bet on a total of five cuts being delivered over the next year, which could prove a tall order that ultimately sees the U.S. currency strengthen further and the Aussie weaken. 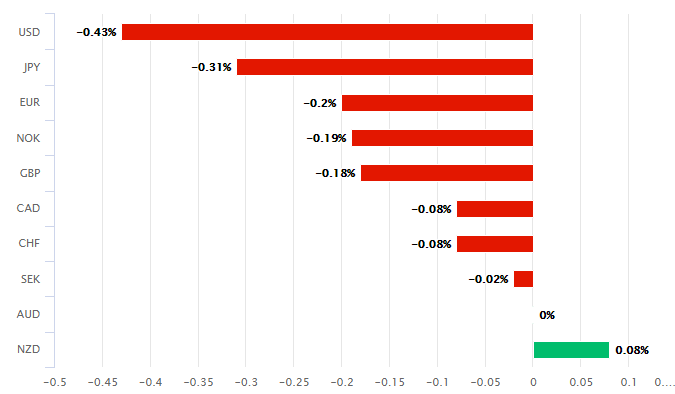 Australian rates are now less than half those offered to savers in the U.S., which means the Aussie Dollar would be likely to suffer if the Fed neglects to indulge investors by hinting that it will match market pricing for more than 100 basis points worth of cuts up ahead. And given mounting speculation of a 'mini deal' to put the U.S.-China trade war on hold, the Fed has even less of a reason to do that than it did back in July.

Higher rates have made U.S. Dollar assets more attractive in the eyes of investors than their Aussie counterparts, drawing capital out of and deterring it away from Australia, which has led to a steady but double-digit decline in the AUD/USD rate over the last year or more. Australia's economic sensitivity to the health of the Chinese economy, which has been damaged by the trade war, has also been behind some of the decline.

"AUDUSD finally turned the corner a bit more forcefully overnight and gave a leg up to bears as the important resistance zone overhead held up over the last week. The pair is in a well-established downtrend since early 2018. The FOMC meeting will decide the immediate fate of the pair, as another Fed policy mistake could risk an aggravated further rise in the US dollar," says John Hardy, chief FX strategist at Saxo Bank. "The RBA remains on course for further rate cuts, but may not move on October 1 in hopes that the US and China can piece together a de-escalation of the trade war."

Australia's Dollar appeared to have bottomed out against its U.S. rival in August and the AUD/USD rate has since been attempting to reclaim the 0.69 handle, although technical 'resistance' on the charts has so-far frustrated its efforts and Saxo Bank's Hardy sees the bears, in other words those who're betting the Aussie will fall, winning the day for timebeing. 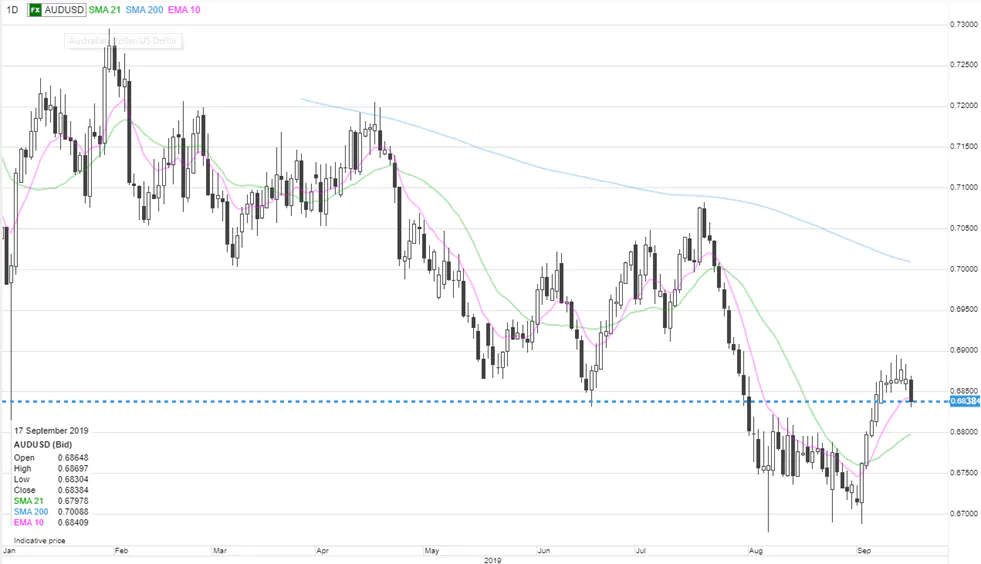 Wednesday's Fed decision comes barely a day after minutes of September's Reserve Bank of Australia (RBA) meeting appeared to suggest that markets were wrong to think at the beginning of this month that Australian policymakers might wait for a bit longer before slashing their own interest rate for what would be a third time this year. Bets on an October RBA rate cut have diminished this month following the September decision to leave the cash rate at 1%.

The RBA said in September it will monitor developments "including in the labour market" closely over the coming months and adjust its policy settings if necessary. Previously, the bank said only that it would "monitor developments in the labour market closely", suggesting it will now take cues from a broader array of indicators. This is after saying in August it'd like to see an "accumulation of additional evidence" that more cuts are necessary before acting again.

"Today's minutes took a much more material step in the dovish direction, which we think makes October 'live' for a 25bps rate cut, as we have long been expecting (against consensus, & market pricing for only ~7bps)," says George Tharenou, an economist at UBS, in a note to clients Tuesday. 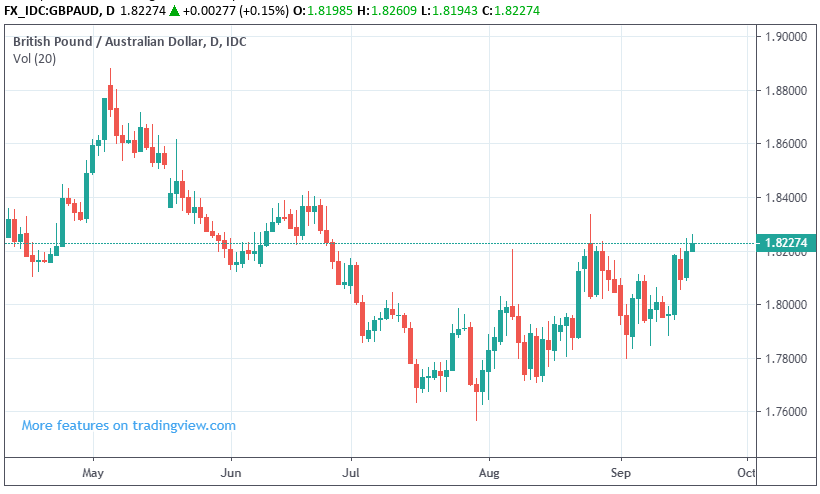 Tuesday's RBA minutes showed the RBA growing more concerned about the impact a economic slowdown will have on the Australian economy. They also revealed doubts about the extent to which government tax cuts will aid the Aussie economy through its current soft patch, while reiterating long-held concerns about employment growth. The RBA has emphasised the importance of domestic jobs in its decision making, saying that it'll respond to a "sustained increase" in joblessness with rate cuts.

Any downside surprises would be sure to hurt the Australian Dollar during the overnight session because the market-implied probability of an October rate cut has recently fallen and the market consensus is currently in favour of the RBA leaving rates unchanged again next month.

"We still expect the RBA to cut rates by 25bps in Oct-19, & again in Feb-20 & May -20 to 0.25%. However, the October cut remains 'conditional' on other global central banks easing (Fed & BoJ this week), and a soft enough labour market report Thursday," warns UBS' Tharenou.