- But general election now inevitable and will see weakness return.

The Pound is set for a brief period of outperformance against the Australian Dollar in the weeks ahead, according to strategists at Westpac, although the British currency is expected to hand back any intermittent gains toward year-end as markets eye the risks posed by a seemingly inevitable general election.

Pound Sterling has risen more than 1.5% against the Aussie in the last month and is now down barely more than half a percent for 2019 after opposition MPs and 'rebels' from the governing Conservative Party hijacked control of the parliamentary agenda and forced through legislation that requires Prime Minister Boris Johnson to request from the EU a third delay to the UK's EU departure.

The move has opened a constitutional can of worms and undermined the Prime Minister's hand in talks aimed at securing changes to the contentious and three-times-rejected agreement struck with Brussels by Johnson's predecessor Theresa May, but markets have bid Sterling higher because it's been seen as reducing the previously-elevated probability of a 'no deal' Brexit. The legal position was until this week that if talks with the EU failed, the UK would leave the bloc without formal arrangements on October 31, which is a legal position the opposition voted for when setting the ball rolling on the exit process.

"GBP short-covering should extend somewhat during the parliamentary recess, given reduced danger of a hard Brexit after PM Johnson’s various parliamentary defeats. But an early election is still likely, with investors unlikely to be enthused about the major parties’ policy platforms," says Westpac's Sean Callow. 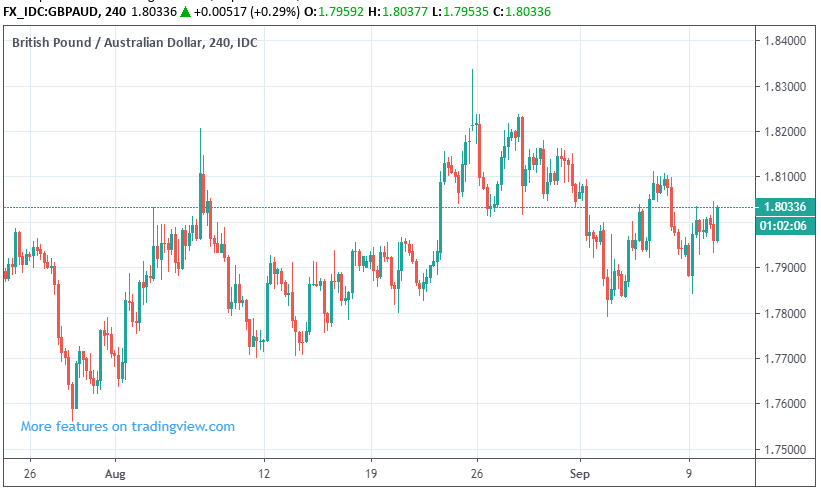 Johnson, after staking his premiership on a "do or die" pledge to take the UK out of the EU on October 31 regardless of whether formal arrangements have been agreed, is seeking to drum up support in parliament for an election in which the fate of Brexit will be decided. However, after having called for a new poll around twice every week for more than a year, the opposition has now refused to back an election on two consecutive occasions.

The opposition says it's reluctant to go back to the ballot box until the UK's EU exit has been delayed for what will then be a third time, which means details of any forthcoming national poll will not be available until October 19 at the earliest, which is the deadline for Boris Johnson to request from the EU an extension. The 'Benn Bill', which became law Monday after receiving Royal Assent, states the PM must request the extension if parliament has not granted him permission to pursue a 'no deal' Brexit.

"AUD/USD and GBP/USD have been understandably choppy in recent weeks, with AUD absorbing the volatility of US-China trade relations and sterling of course focused on Brexit risks. As a result, GBP/AUD has traded wider ranges," Callow says. "In coming weeks, the pound should outperform, with scope for GBP/AUD 1.8350 and then 1.8500. Once an election becomes the main focus, sterling weakness should resume." 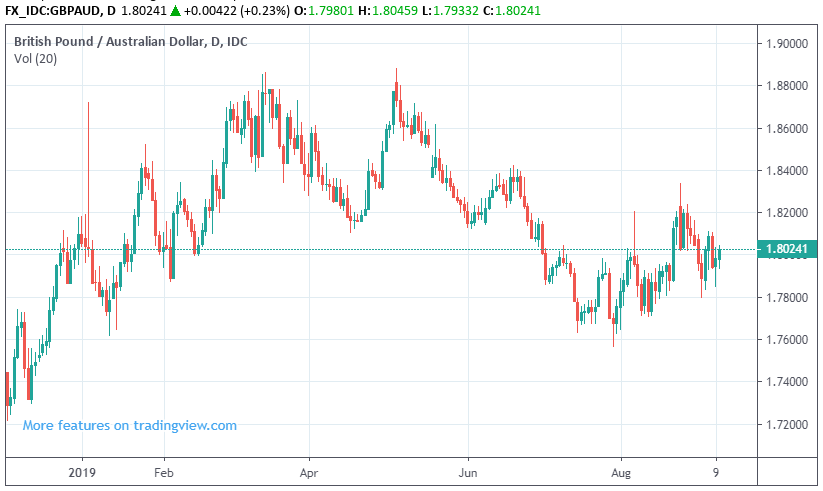 Prime Minister Johnson has repeatedly claimed since the bill became law that he will stick with his "do or die" pledge, stating clearly that he "will not request" another Brexit delay, although he's not said whether this is because the government sees a way it can circumvent the new law or whether he will simply refuse to comply with it. Nonetheless, and regardless of whether parliament is succesful in forcing the PM to request a delay from Brussels, an election is now seen by the market as inevitable.

Johnson's government is now without a majority after he was compelled to withdraw the whip from 21 Conservative Party MPs for having aided the opposition in its hijacking of the parliamentary agenda, which is always controlled by the government as a matter of constitutional convention. Those MPs were elected to deliver the Conservative manifesto but many had since the 2017 vote, worked consistently against the government on Brexit.

"AUD’s yield premium has trended lower since September 2017 when the BoE MPC struck a hawkish note, paving the way for the rate rise that was delivered in November 2017 (and again in August 2018). In recent months, falling AU yields have been the main driver, as markets started to price RBA rate cuts that were finally delivered in June and July 2019. AUD’s yield advantage is very low in historical context and in isolation, yield spreads suggest plenty of downside risk for AUD," Callow says. 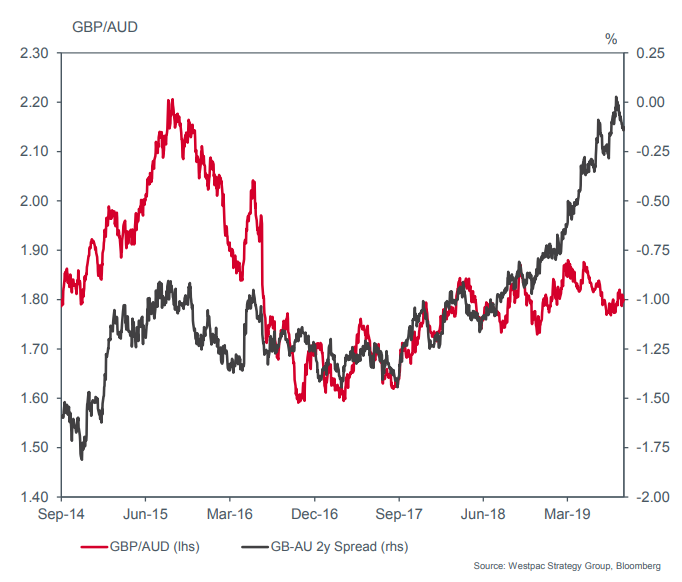 Markets fear a 'no deal' Brexit because it's seen as something that will lead to slower growth and lower interest rates over the long-term than otherwise have been the case, although it's not the only influence on the Pound-to-Australian-Dollar rate, which is still around its 2019 starting point because of a weak Australian Dollar has helped to offset some of Sterling's decline.

Reserve Bank of Australia (RBA) interest rate policy, which has weighed on the returns that investors earn from owning Aussie government bonds in recent quarters, has been a significant driver of weakness in Australian exchange rates and so too has the trade war between the U.S. and China. Both factors are tipped to remain a weight around the ankles of the Aussie in the months ahead, providing a cushion for the Pound-to-Australian-Dollar rate in the event of renewed weakness.

"AUD/USD has bounced over the past week, aided by the resumption of US-China trade talks even as new tariffs commence," Callow says. "Resource company dividend payments may also have helped. The cautious optimism over trade relations may well persist into the October meetings, supporting AUD. But rate cut talk should pick up as Australia’s unemployment rate fails to progress towards the RBA’s desired 4.5%, chipping away at AUD on crosses."