- But CBA says downside will prevail as global backdrop is dire.

The Australian Dollar advanced against most of its G10 rivals Friday as markets celebrated President Donald Trump's claim that he could yet meet his Chinese counterpart in September, citing progress in talks between the two warring economies, although analysts say the Aussie's gains won't last for long.

Trade talks with China are going well and a September meeting between Presidents Donald Trump and Xi Jingping cannot yet be ruled out, Trump told reporters late on Thursday, just a day after he scaled back and partially delayed a 10% tariff due to be imposed on China's remaining $300 bn of annual exports to the U.S. from September 01. Around half those tariffs will still go into effect next month but most of the rest of them will now be delayed until December 15.

Conciliatory words and the tariff delay have helped soothe jittery financial markets and put a floor beneath so-called risk assets like the Aussie Dollar, which was hurt earlier this week when the 10-year U.S. Treasury yield fell below that of the two-year bond in a process that led the 'yield curve' to become inverted. Long-term bond yields tumbled Wednesday in response to poor Chinese and German economic figures that prompted further unease among investors about the global economic outlook.

"An inverted yield curve historically means bad news for the Antipodeans (i.e. AUD & NZD). The table above shows the best longs in terms of average performance during the following six months after a US curve inversion, with a hit rate of 80% or higher," says Marin Enlund, a strategist at Nordea Markets. 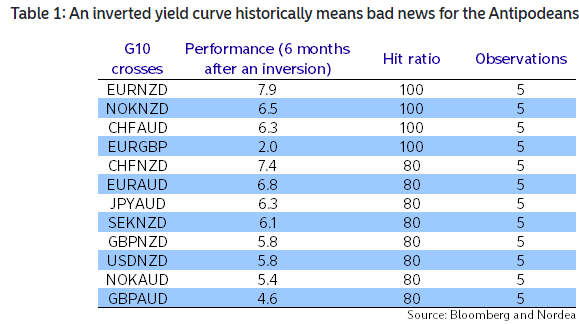 Nordea's Enlund says the Pound-to-Aussie rate has risen by an average of almost 5% during the six months after each of the last five U.S. yield curve inversions, which are widely seen as harbingers of recession. Australia's Dollar is underwritten in no small part by a gigantic commodity trade with China and the rest of the world, which is why it's so sensitive to changes in the global economic outlook not mention developments in the trade war with China.

Chinese firms sell more than $550 bn of goods to American companies and consumers each year but these products are becoming less attractive because around $250 bn of them now incur a 25% tariff charge when they enter the U.S. And because the Chinese economy is slowing in response to the tariffs, the Eurozone economy is also weakening in sympathy, which is another negative for the global growth picture.

"AUD/USD drifted higher to 0.6784 in the Asia session. However, we anticipate the downward pressure on AUD/USD will resume because global uncertainty remains high and market participants continue to expect more RBA rate cuts.  In our view, the Australian economic outlook is consistent with another two 25bps cuts in the cash rate (to 0.5%). CBA Economics favour the November 2019 and February 2020 meetings," says Kim Mundy, a strategist at Commonwealth Bank of Australia. 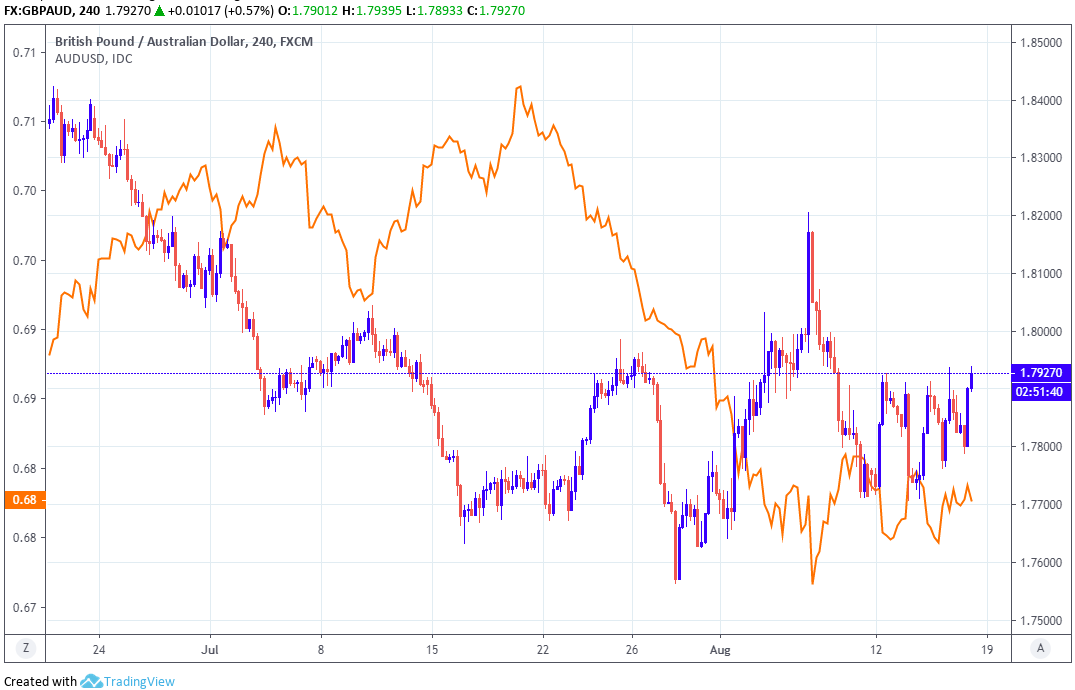 Friday's price action follows closely behind a strong july jobs report that was perceived by some as making a September interest rate cut from the Reserve Bank of Australia (RBA) less likely. But CBA says rising unemployment and a softening economy will force the RBA to cut rates twice this year, taking the cash rate down to a new record low of 0.5%.

The RBA has already cut its cash rate twice this year in the hope of stoking an economic pickup that lifts inflation back into its long-elusive 2%-to-3% target band, which has weighed on the Australian Dollar. Changes in rates are normally only made in response to movements in inflation, which is sensitive to growth, but impact currencies because capital flows tend to move in the direction of the most advantageous or improving returns.

"AUD/USD is holding sideways near term, it has not overcome any resistance of note and continues to hold above the .6738 January 2019 low. This support is reinforced by .6720, the 2016-2019 support line (connects the lows). The market did recently trade through these levels BUT did not CLOSE below here," says Karen Jones, head of technical analysis at Commerzbank. "Rallies will need to regain the .6832 June low as an absolute minimum in order to alleviate immediate downside pressure." 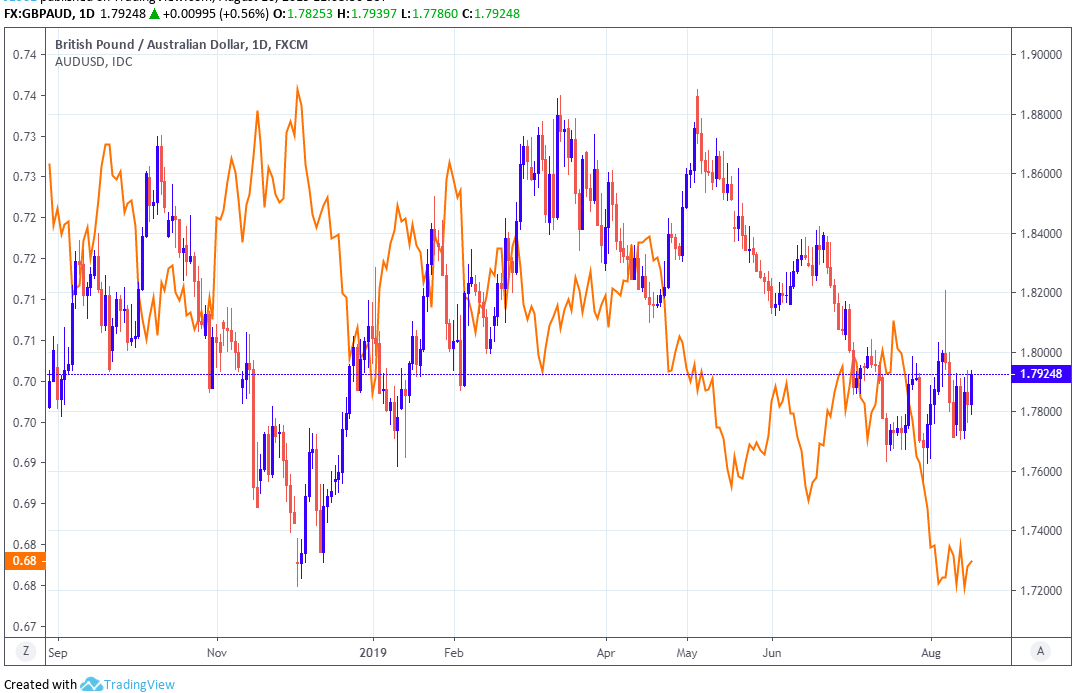