- But jobs data due next week poses a risk to newfound support.

- AUD seen "recovering very near term" on charts at Commerzbank.

The Australian Dollar was treading water Friday after the Reserve Bank of Australia (RBA) signalled it will wait a while before cutting interest rates again and as market concerns over the Chinese Renminbi eased, but analysts are divided in their outlook for the Antipodean currency over the coming weeks.

Australia's Dollar was only a touch lower after the RBA's latest statement on monetary policy neglected to provide a catalyst for the currency to retreat from highs reached in the prior session. Some analysts say this kind of price action could portend a recovery in the week ahead.

"AUDUSD has tracked developments in 10Y rate spreads fairly closely in recent months. We think this is likely to remain the case for the foreseeable future. These currently point to a degree of upside risk for spot," says Ned Rumpeltin at TD Securities. "With an eye on support at 0.6745, we think a break back above the 0.6825/35 zone would put at test of 0.6865 into viewA strong return of 'risk-on' could see a move higher toward 0.6910."

Reserve Bank of Australia Governor Philip Lowe presented another set of downgraded economic forecasts to parliament and the market in the early hours of Friday morning, which imply reduced GDP growth of just 2.5% for 2019 and inflation of just 1.5%. Both are lower than the forecasts announced in May. 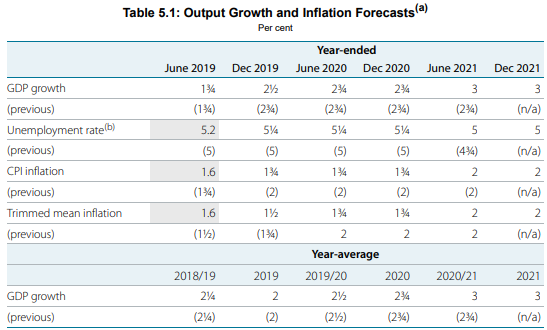 Above: RBA economic forecasts from August statement on monetary policy.

The bank also cut its inflation forecasts for 2020 and 2021, with the consumer price index now not expected to reach the ever-elusive 2% threshold until the end of the latter year. The forecast for unemployment was lifted to its current 5.2% level this year and next while wage growth projections were downgraded.

However, and despite that the bank says it's prepared to cut Australian interest rates again, Governor Lowe also told lawmakers that "additional evidence" of a need for such policy action would be required first. Evidence could come in the form of jobs figures for the month of July and August, which are due next week and in September.

"The RBA stressed data dependence in their last statement and they will be watching the July employment report and Q2 Wage Price Index closely for evidence of improvement in the labour market. We expect both of these reports to disappoint the RBA and markets," says John Bromhead, a strategist at ANZ.

Bromhead has a 'bearish' outlook for the Aussie in the week and month ahead. He says 'fair value' for the AUD/USD rate is 0.65, which is almost 5% below Friday's market price of 0.6810 and ANZ's year-end forecast, but that the extent of the decline will depend on developments in China and at the RBA. 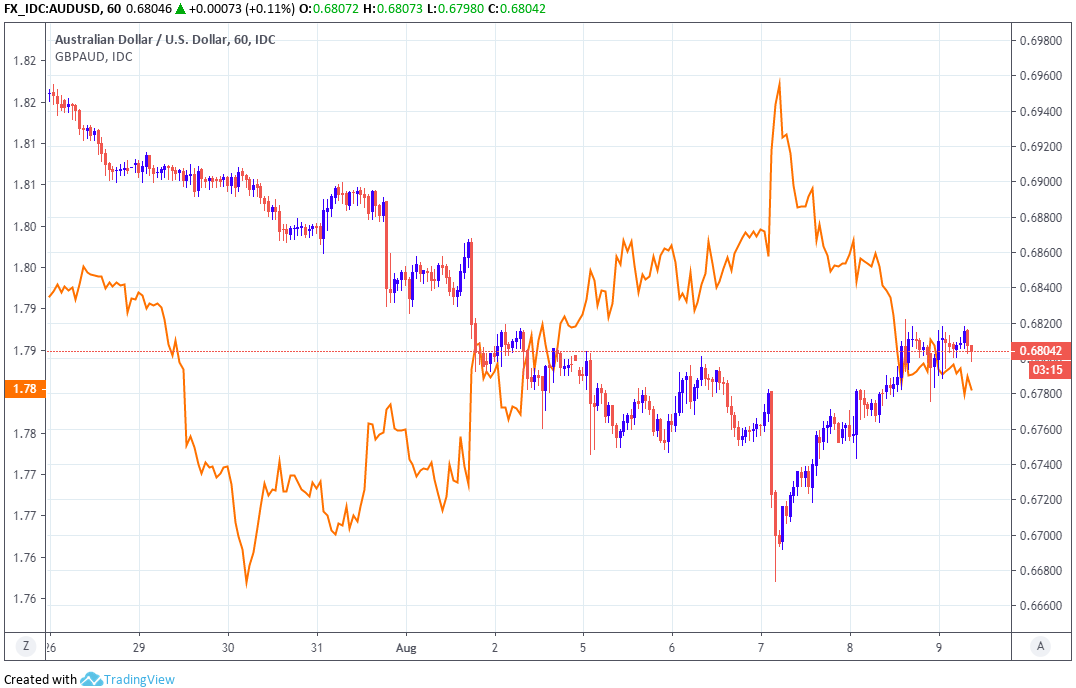 Australia's Dollar was hurt earlier this week when the People's Bank of China (PBOC) allowed the Renminbi to depreciate, although concerns about the Chinese currency have since eased. It has a positive correlation with the Renminbi because of Australia's significant commodity trade with China.

The RBA left its cash rate unchanged at 1% this week after cutting it on two consecutive occasions in recent months and said only that it'll act again if the outlook for the economy warrants it. That, and Friday's statements, have encouraged the idea it might wait a while before cutting for a third time.

Australia's central bank is hoping to reflate the slowing economy with lower borrowing costs in the hope that faster economic growth will get inflation back to the 2%-to-3% target, although the consumer price index has been stuck below that level for years now.

"We think another rate cut this year is inevitable. But it appears the Board wants to see whether the stimulus elicits more of a response than expected. With little concrete data available on this by September, an October rate cut seems more likely. But every month is live," says David Plank, an economist at ANZ. 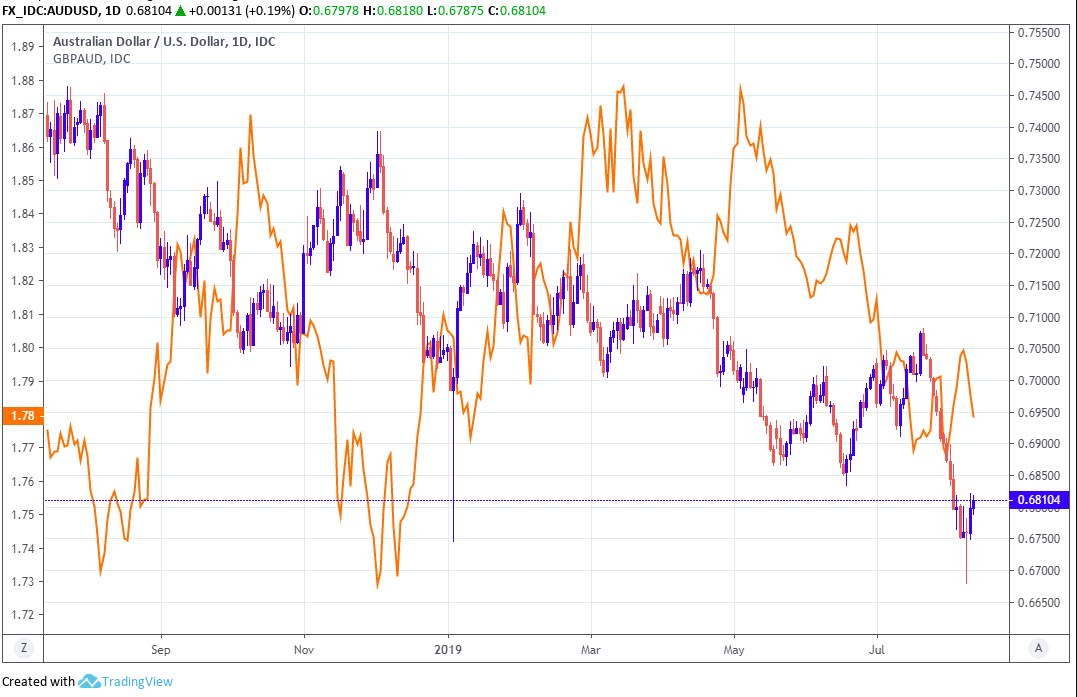 Rate cuts have seen Australia's yield advantage over the U.S. Dollar eaten away entirely, while diminishing the additional yield typically offered by Aussie government bonds relative to other G10 counterparts. That's why the Aussie has fallen from 0.80 against the U.S. Dollar in January 2018 to 0.6810 Friday.

"AUD/USD is recovering very near term. The market has recently eroded the .6738 January 2019 low and .6720, the 2016-2019 support line (connects the lows) BUT did not CLOSE below here. This move looks exhaustive and we would allow for some consolidation/correction near term. Rallies will need to regain the .6832 June low as an absolute minimum in order to alleviate immediate downside pressure," says Karen Jones at Commerzbank.

Jones, Commerzbank's head of technical analysis, told clients previously on Wednesday that a decline below 0.6720 earlier this week had all but removed one of the last technical support levels stood between the AUD/USD rate and its 2008 financial crisis low of 0.6020, with the decline indicating ongoing weakness that would draw the market down toward that level. But the original move seen on the charts was quickly faded, leaving the Aussie at an inflection point.