The Australian Dollar recovered its poise this last week after Federal Reserve (Fed) Chairman Jerome Powell signalled the U.S. central bank will begin cutting interest rate as soon as the end of July, which has got analysts at Morgan Stanley and National Australia Bank (NAB) tipping the Aussie for further gains.

Australia's Dollar has risen against its U.S. and British counterparts this week as investors look for a period of stability in the Reserve Bank of Australia (RBA) cash rate and increasingly position for a series of cuts to borrowing costs in the U.S., which could boost the relative appeal of Aussie assets.

The Fed has pivoted rapidly from a "patient" stance toward the U.S. interest rate outlook to one of 'dovish' concern, with Chairman Powell increasingly minded to support the U.S. economy in the face of an anticipated slowdown that has already shown its face elsewhere in the world. It's expected to cut rates on Wednesday, July 31 in an effort to sustain the expansion and shield itself from White House criticism.

"Fed Chairman Powell's testimony to Congress further adds conviction to view for AUDUSD to rally. We are looking for a break meaningfully above resistance earlier this week at 0.7036 and remain long AUDUSD," says Gek Teng Khoo at Morgan Stanley, in a research note. 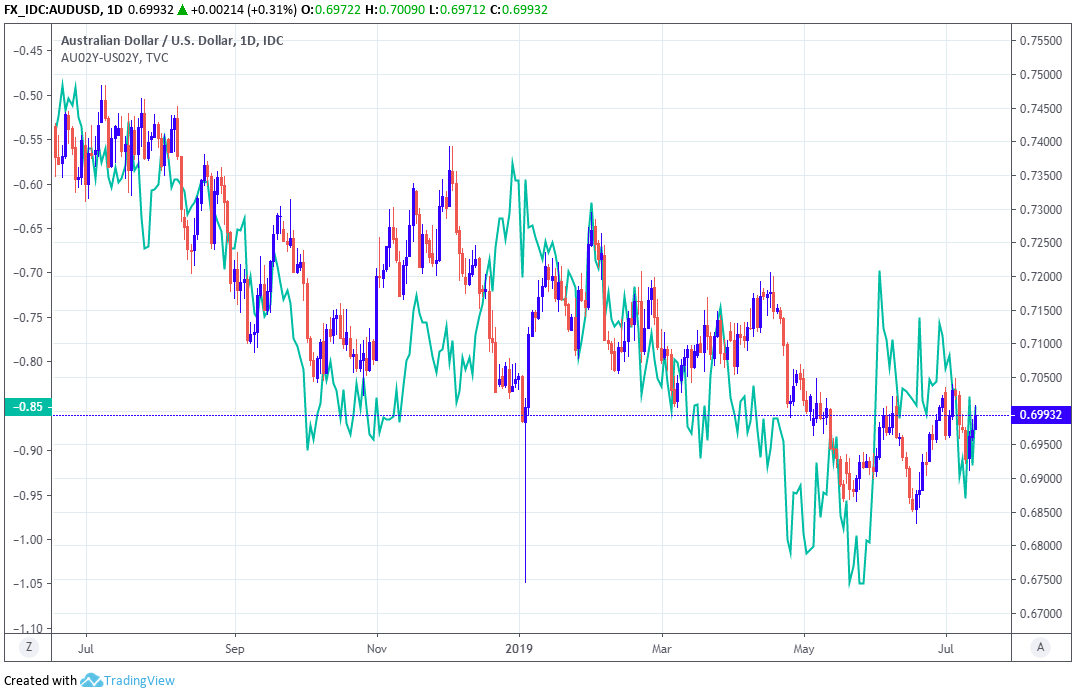 Powell told Congress Wednesday that uncertainties around the U.S. outlook have increased notably in recent months before singling out the trade war with China, Brexit and a dispute over the U.S. debt limit as particular stains on an otherwise bright picture.

His comments came despite a notable rebound in jobs growth during June, which was revealed by the latest nonfarm payrolls report, and were perceived by the market as a sure sign the Federal Open Market Committee will seek to cover its back by cutting rates at the end of the month.

Speculation of imminent cuts from the Fed has led the gap, or 'spread', between yields on U.S. and Australian bonds to narrow in favour of the Antipodean unit. In other words U.S. yields are no longer quite so attractive to investors, relative to their Aussie counterparts, as they were a few weeks ago.

Morgan Stanley says this should offer support to the Aussie in the months ahead, especially as the RBA signalled weeks ago that it could wait a while before doing as markets expect by cutting its own rate again. The RBA has cut rates twice this year but markets had long priced-in those moves.

"We stay long AUDUSD," Khoo writes. "Despite the weak data release this week, market pricing for RBA cuts over the next 12 months remains unchanged, suggesting that the market is expecting the RBA will not cut further unless there is a strong deterioration in data. We continue to see the unwinding of short AUDUSD positioning to be a driving for AUD strength as the USD weakens." 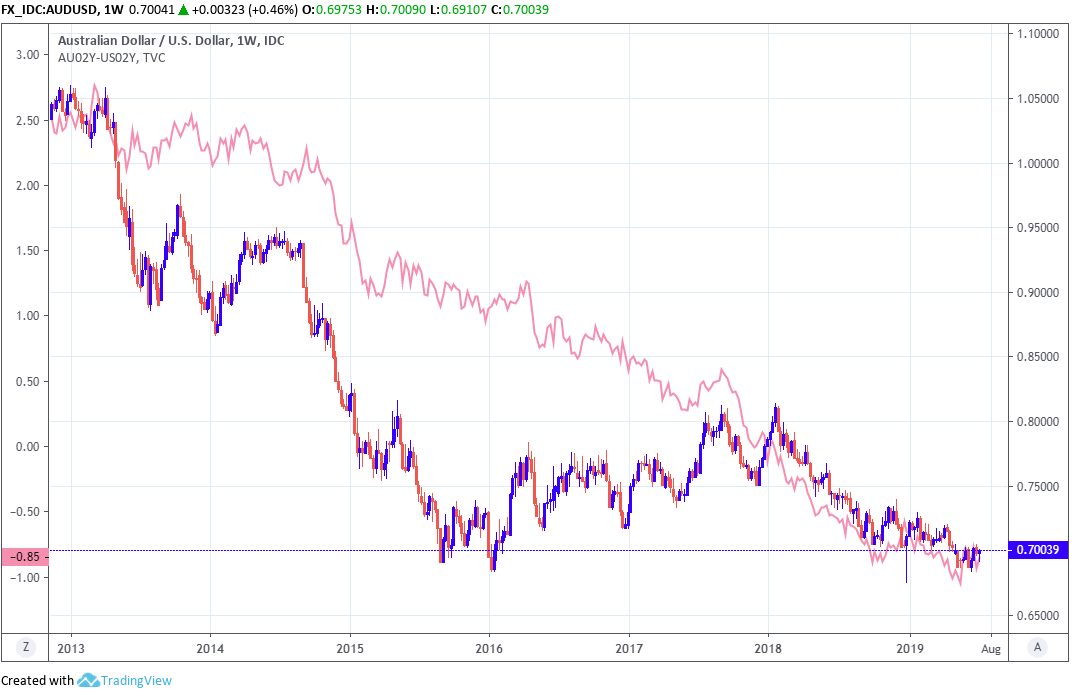 "Despite the weak data release this week, market pricing for RBA cuts over the next 12 months remains unchanged, suggesting that the market is expecting the RBA will not cut further unless there is a strong deterioration in data. We continue to see the unwinding of short AUDUSD positioning to be a driving for AUD strength as the USD weakens," says Alan Oster, chief economist at NAB. "We see the AUD/USD tracking in the mid-70c range over the next year."

Like Morgan Stanley, NAB says the Federal Reserve's looming interest rate cuts will undermine the U.S. Dollar and enable other currencies to recover from earlier losses, including the Australian Dollar. It forecasts the AUD/USD rate will rise to 0.75 over the next year.

The bank's target for a trade entered on June 20 is 0.73 and if that is reached, the Pound-to-Aussie rate can be expected to fall below Morgan Stanley's year-end forecast unless there's a concurrent pickup in the GBP/USD rate.

Pound Sterling has seen the gap between British and Australian government bond yields become much less disadvantageous in the years since the EU referendum but a Brexit-related 'risk premium' has prevented the UK currency from capitalising on this.

Many analysts now expect Sterling to remain heavy into year-end owing to the October 31 Article 50 deadline for the UK to approve the EU Withdrawal Agreement, request a further extension of the negotiating window or go for a 'no deal' Brexit. The outlook for the Aussie is brighter. 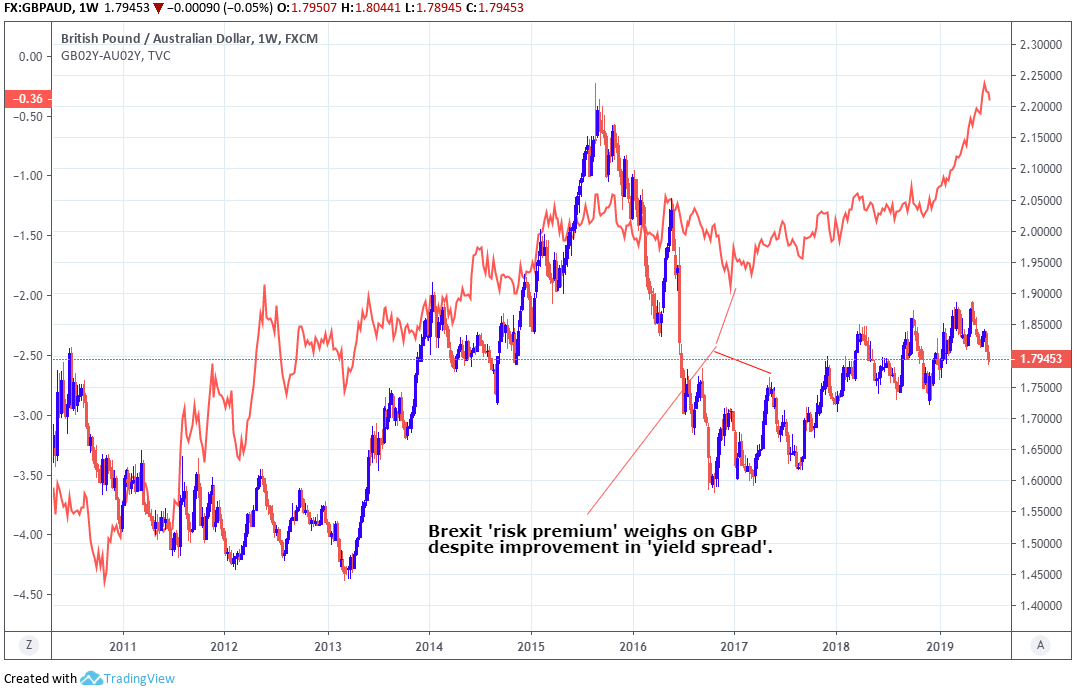 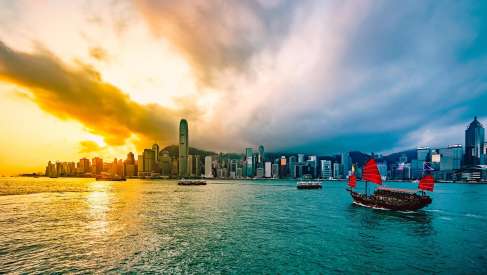