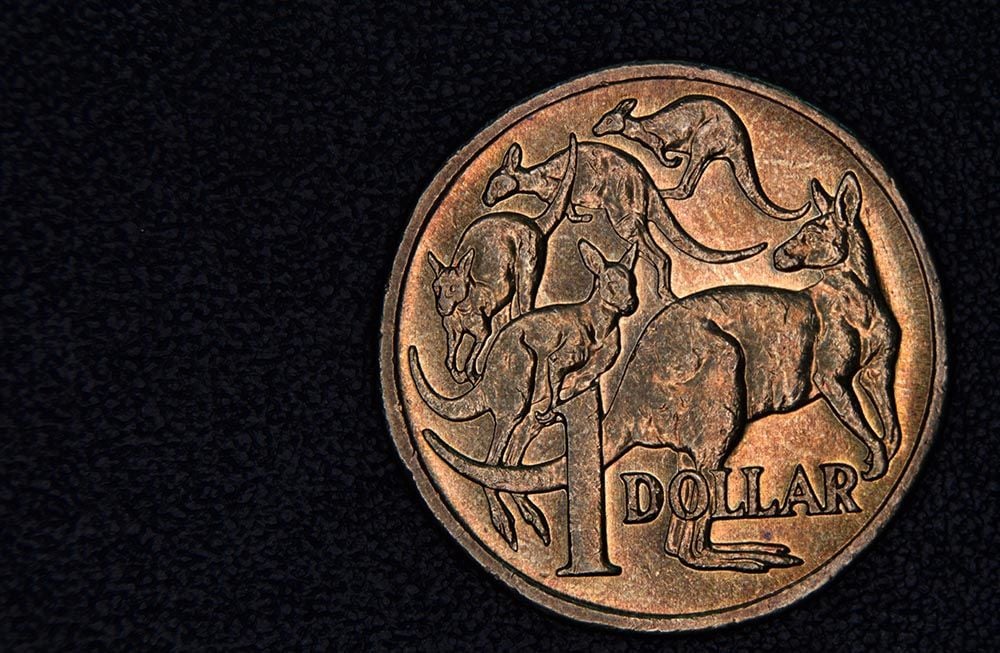 - But CIBC stays on fence, fearing disappointment in Osaka, Japan.

- But both banks see AUD/USD higher, GBP/AUD lower, at year-end.

The Australian Dollar was on course for another day of gains over its U.S. counterpart Friday and is now tipped as a buy at Morgan Stanley, although the analyst team at Canada's CIBC Capital Markets are remaining on the sidelines so clearly, not everybody shares the American bank's enthusiasm.

Australia's Dollar has risen in four consecutive sessions of the European week as investors continue to respond to a landmark shift in the Federal Reserve's interest rate policy and amid renewed hopes the global economy can be spared another escalation of the U.S.-China trade war by month-end.

The Aussie is a disproportionate beneficiary of both the this week's developments. Australia's largest trade partner is China, who's economy would benefit from any breakthrough in talks with the U.S., and the currency is underwritten largely by raw material exports, prices of which are also sensitive to expectations for global growth.

U.S. trade tensions with China have weighed on the Aussie almost a year now because of what they might mean for the global economy and the nation's resource exports but the Antipodean unit was also crushed earlier last year by the Federal Reserve, which lifted its interest rate above that of Australia.

Now, Morgan Stanley has tipped the currency as a buy, saying it should do well in the short-term because recent developments on the domestic and international interest field could see other investors who've bet against the Aussie being forced into a rethink of their wagers.

"RBA Governor Lowe delivered a speech that confirmed the RBA's easing bias and alerted the market that more cuts could be delivered in the near future. However, markets have already priced in 50bp of cuts by year end, and Street consensus is increasingly shifting toward a July cut (while our economists' base case remains for only one more cut, in August), suggesting AUD upside risk," says Gek Teng Khoo at Morgan Stanley, in a note to institutional clients. 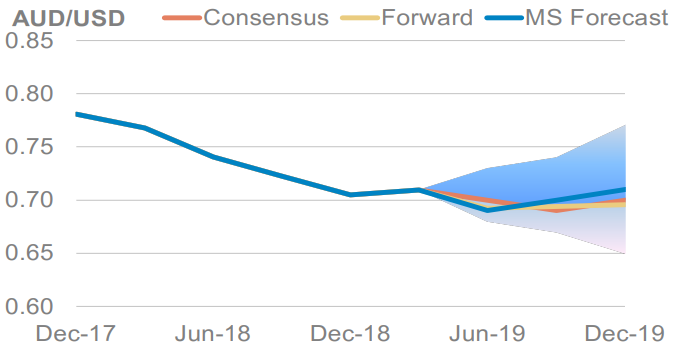 Pricing in the interest rate derivative market implied on Friday something like an 80% probability the Reserve Bank of Australia (RBA) will cut its interest rate for a second time this year in July, taking it to a new record low of 1%. The market-implied cash rate was just 1.05%.

However, and not content with two interest rate reductions for 2019, investors are also betting heavily the RBA will cut Aussie borrowing costs again by year-end because the market implied cash rate for December 03 was, on Friday, 0.74%. But Morgan Stanley economists are forecasting just one more cut.

This could leave markets disappointed and drive the Australian Dollar higher because it could prevent the gap between intrerest rates in Australia and the U.S. from moving further in favour of the American Dollar. Rate decisions have significant influence over the international capital flows that drive movements in currency markets.

"Markets are also heavily short-positioned in AUD, which could allow AUD to outperform on the back of USD weakness driving a short-covering rally. We enter a long AUDUSD position targeting 0.73 accordingly," Khoo writes, in a note to clients this week. 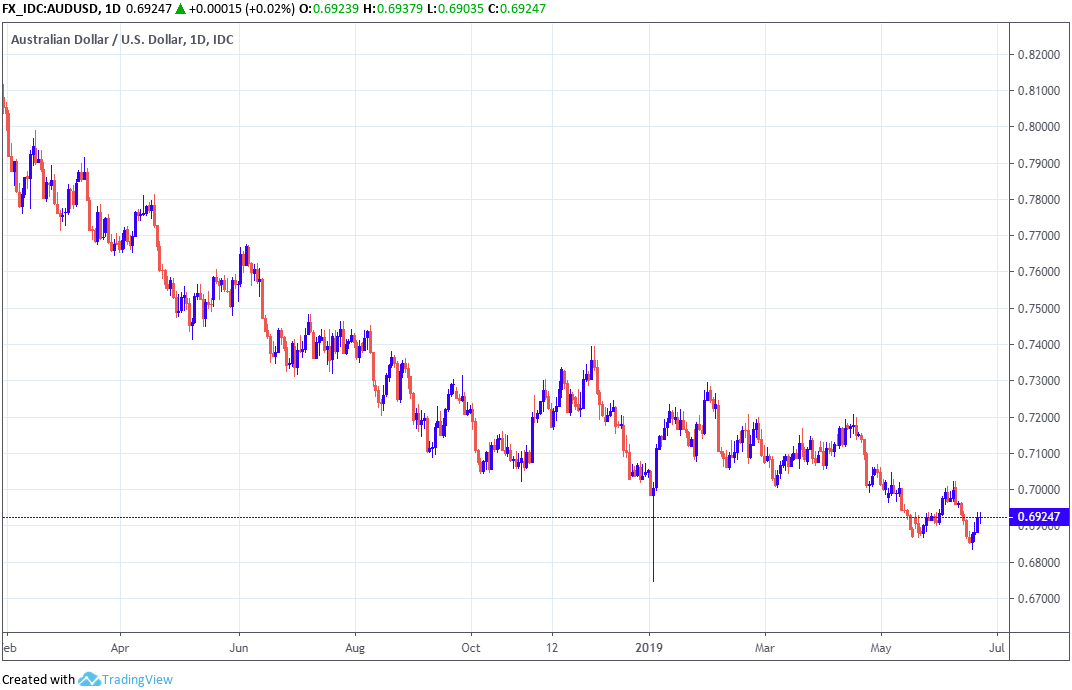 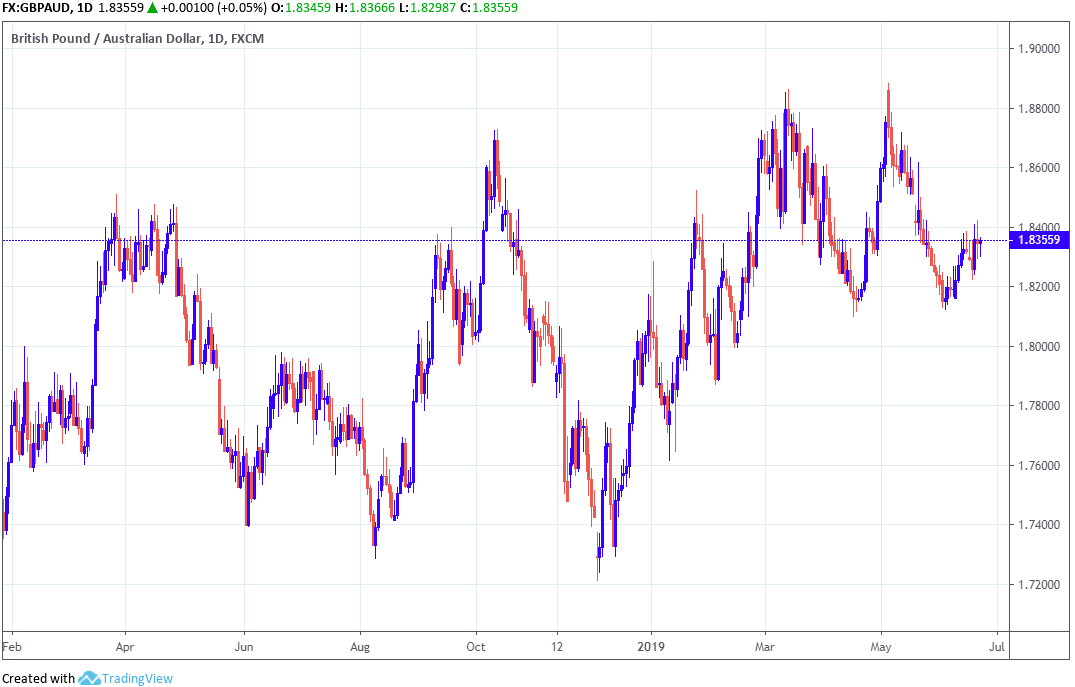 "The market has roughly 45 bps of cuts priced in for the remainder of the year, and positioning proxies indicate a heavy short AUD bias. This supports our view that we’re close to the base in AUDUSD price action. Still, we’re wary about the looming G20 summit and the implications for currencies leveraged to Chinese growth. As such, we remain on the sidelines in the near-term," says Jeremy Stretch, head of G10 FX strategy at CIBC.

Morgan Stanley is not alone in viewing the Australian Dollar as being due a recovery against the U.S. Dollar as analysts at Canada's CIBC Capital Markets are also bullish in their forecasts for the exchange rate, although they're not yet willing to buy the Aussie. Instead, they're decidedly on the fence.

President Donald Trump said Tuesday he will meet with his Chinese counterpart on the sidelines of the G20 conference in Osaka, Japan at the end of the month, stoking hopes that another escalation of the trade war can be avoided.

Phone call with President Xi broke the one month long stalemate, boosted US stock markets, this is gift Trump brought to his official announcement of re-election bid. If the following talks collapse, President Trump is duping American investors and voters. pic.twitter.com/Uf5AjlhkHh

Trump has been threatening to impose a 25% tariff on the remaining $300bn of China's annual exports to the U.S. if his counterpart does not agree to sign up to a deal that Chinese negotiators previously backed out of.

"Unless Presidents Trump and Xi fall in love during the G20 summit, don’t expect a major breakthrough in the China-US trade dispute," says Benjamin Tal, a CIBC colleague of Stretch.

Any deal that averts a further increase of U.S. tariffs would be positive for the Australian Dollar and economy, given the extent of the damage done and risk posed so far in the trade fight between the world's two largest economies. However, an agreement is far from guaranteed.

Are China and the US set to have new decisive negotiations? People around me and myself are less optimistic than we were when two leaders met last December. I tend to believe Trump's call is a result of fight of Chinese side. More battles may be needed for making the US fairer.

Hu Xijin is editor-in-chief of China's Global Times and is often assumed by the market, as well as labelled in the press, as an unofficial government spokesperson.

The Global Times is an English language newspaper targetting an international audience. It's published by the People's Daily, which is owned and controlled by the Central Committee of the Communist Party of China.

CIBC's concern is that June's talks between the U.S. and China do not result in the deal that financial markets may increasingly be anticipating, which would be bad news for the Aussie, especially in the short-term.

However, both CIBC and Morgan Stanley are forecasting an increase in the AUD/USD rate to 0.71 by year-end, although they differ in their outlooks for the Pound-to-Australian-Dollar rate,.

Morgan Stanley sees Sterling falling to 1.77 against the Aussie before year-end while CIBC's projection envisages a more modest decline to 1.80 this year.