- AUD elevated to No.1 in G10 Monday following election surprise.

The Australian Dollar was riding high at the top of the G10 league table Monday following a surprise win for the coalition government in Sunday's general election, although analysts are saying that gains for the Antipodean currency could prove short-lived.

Australia's Liberal Party and National Party coalition took the markets by surprise at the start of the new week when it appeared to have won Sunday's general election against all of the odds.

The coalition has so-far gained 2 seats, taking their total to 76 out of 151, although the national Broadcaster has predicted a total of 77.

All opinion polls had suggested strongly that a change of government was in the pipeline with a less pro-business Labour Party likely to have ruled the roost following the poll. The result is also a win for markets.

Australia's coalition is equivalent to a UK Conservative Party government being propped up by smaller, right of centre parties. It has advocated an equivalent of the UK Help to Buy programme to Australians onto the property ladder and its tax policies are seen as more business friendly than those of the opposition.

"The Coalition’s victory is unlikely to have major near-term fiscal implications, as the Government’s policy platform is largely a continuation of existing policy settings," says Andew Boak, chief economist for Australia and New Zealand at Goldman Sachs. "That said, we expect today’s unexpected victory for the incumbent Government to be a moderate positive shock to sentiment in the corporate sector and a more meaningful one in the housing sector."

Australia's Dollar rose to the top of the G10 league table Monday as a result of the win but the early hours of Tuesday morning will see the release of minutes from the latest Reserve Bank of Australia (RBA) policy meeting as well as an eagerly-anticipated speech from Governor Philip Lowe.

Lowe and his RBA team surprised investors this month when they left Australia's interest rate unchanged at 1.5% but investors are still looking for rate cuts over the coming months so markets will look to the minutes and speech for clues on the likely timing of the first move.

"The market will look for clues to explain the bank’s current views, particularly around inflation and the labour market. On the same day, Lowe will be speaking on the economic outlook and monetary policy, in Brisbane. We think the risks are to the downside given recent data weakness," says Tom Kenny, at strategist at Australia & New Zealand Banking Group (ANZ).

The RBA has been battling against below-target inflation for a number of years now and began warning in February that interest rates could go either up or down in their next change, when before the bank had guided markets to anticipate a rate hike at the next change.

Cutting borrowing costs is one way to encourage the faster economic growth that is necessary for the unemployment rate to come down further, which is seen as a prerequisite for the kind of wage growth and inflation that would lift the consumer price index into the 2%-to-3% target band.

"Tuesday could be important for the Aussie as market expectations are still for rate cuts this year," says Lee Hardman, a currency analyst at MUFG.

Minutes of the RBA meeting will be released at 02:30 Tuesday morning and Lowe will deliver a speech at 03:15, with the text of the governor's address available on the RBA website shortly after. 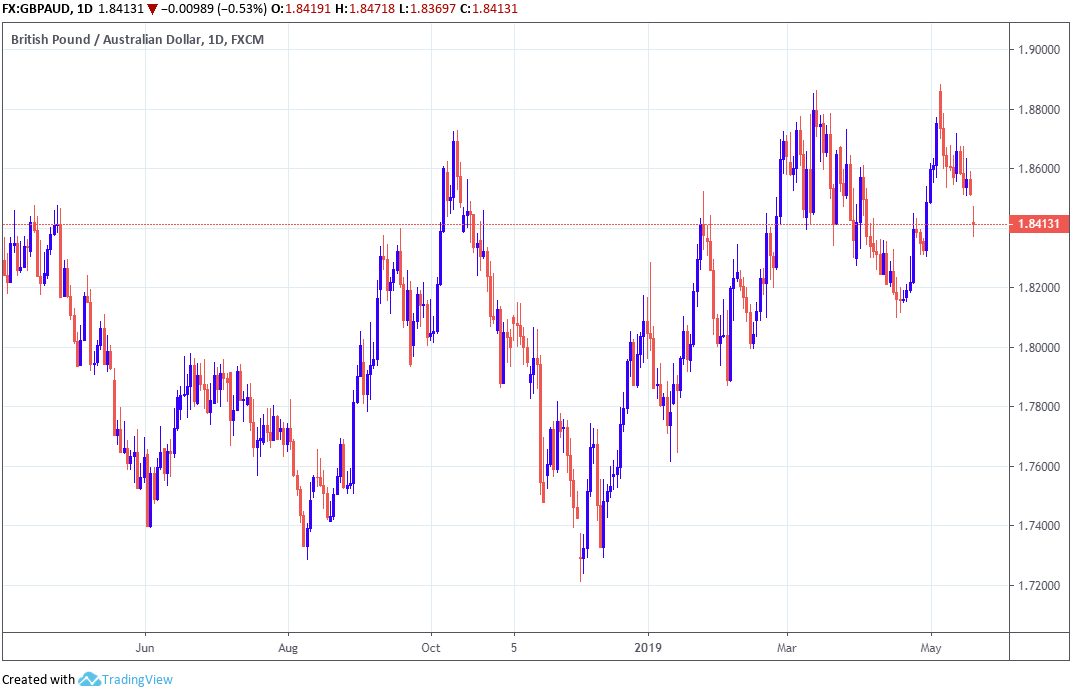 "The AUD has been short on luck. A weak external environment pushed it lower in 2018, but a recovery there was not sufficient to pull it higher in 2019 as the domestic policy environment turned more dovish. We have now broken support. How low the AUD falls will be defined by how aggressively the RBA eases and the success of Chinese stimulus efforts," says ANZ's Daniel Been.

"AUD/USD nearly reached the 78.6% Fibonacci retracement at .6857 before stabilising. Immediate bearish pressure should remain in play while no advance above the 50% retracement and the May 10 high at .7016/18 is seen," says Axel Rudolph, a technical analyst at Commerzbank. 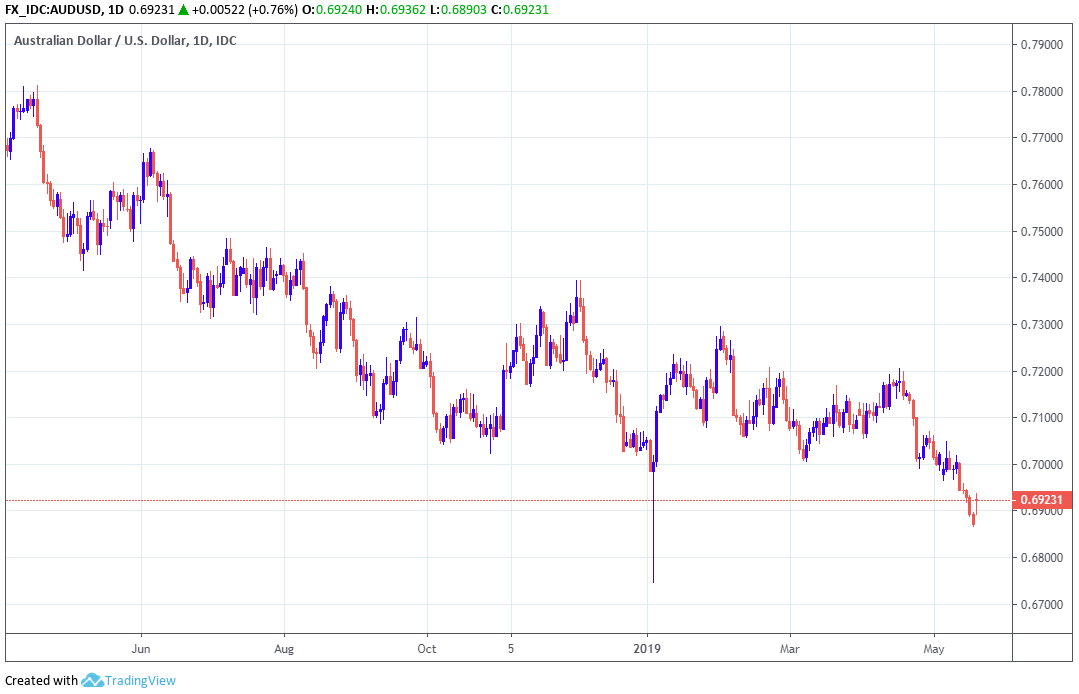 The danger for the Australian Dollar Tuesday comes mainly from the schedules speech by Lowe, given the message emitted by April's unemployment and jobs data, which was released last week.

Lowe has said many times that a "sustained increase" in unemployment would compell the RBA to cut its interest rate and after the jobless number rose to 5% in February, it jumped a further 20 basis points to 5.2% in April.

"AUD/USD may decline toward 0.6830 overnight and could underperform against most major currencies we monitor. RBA Governor Phil Lowe is delivering a speech on “The Economic Outlook and Monetary Policy”. We see a risk that Lowe outlines the case for a rate cut in his speech," warns Kim Mundy, a strategist at Commonwealth Bank of Australia.

All of those numbers are substantially below the current 1.5% rate but they're not quite at the 1.25% and 1% rates that would prevail following two cuts.
If RBA governor Lowe says anything on Tuesday that encourages those numbers to drift Lower then the Australian Dollar would be likely to suffer.

"We have changed our view on the cash rate, bringing forward the timing of forecast rate cuts to start in June. Previously, we had forecast the RBA to cut the cash rate by 25bp in July and again in November, taking the cash rate to 1%," says Alan Oster, chief economist at National Australia Bank (NAB). " We also see a risk that the RBA delivers additional policy stimulus by early 2020, either by cutting again or opting for an alternative policy measure."

Oster says last week's unemployment report for April provides a clear indication the economy is weaker than the Reserve Bank of Australia had deigned to believe at its May policy meeting, which he says will prompt an interest rate cut on June 04 and another in August.

If he is right the Aussie Dollar could be in for a torrid few months because, as much as the financial markets have been betting heavily on rate cuts coming this year, they're clearly still not prepared for that level of cuts quite so soon.

"Increased risk aversion since the latest escalation in US-China trade tensions has hit the Australian dollar especially hard, while the Japanese yen has been the main beneficiary. We expect this trend to continue over the rest of 2019, regardless of the trade war, as weaker global growth prompts investors to retreat further from “risky” currencies," says Nikhil Sanghani at Capital Economics.