- AUD rockets on speculation of change in Federal Reserve policy.

- End of QE run-off a positive for AUD, housing market and economy.

The Australian Dollar sky-rocketed in the final session of the week, as the U.S. Dollar slumped, in response to speculation suggesting that a second change in Federal Reserve (Fed) monetary policy could now be in the pipeline as well as series of solid corporate earnings reports.

Australia's Dollar was higher and the greenback lower after The Wall Street Journal speculated the Federal Reserve could be close to ending the gradual run-down of a mammoth government bond portfolio acquired during the quantitative easing (QE) years.

"Federal Reserve officials are close to deciding they will maintain a larger portfolio of Treasury securities than they’d expected when they began shrinking those holdings two years ago, putting an end to the central bank’s portfolio wind-down closer into sight," the Journal says.

The Fed's balance sheet swelled from less than $1 trillion to more than $4 trillion between 2008 and 2015 as it bought huge piles of U.S. debt in an effort to lift inflation by stimulating the economy with lower market-based interest rates.

It ended QE a long time ago but it wasn't until the middle of 2017 the central bank stopped reinvesting the money it gets from the federal government each time a bond falls due.

Those earlier reinvestments had ensured a steady supply of Dollars was drip fed into the U.S. and international financial system. However, the decision to stop reinvesting the proceeds of maturing bonds has since created a shortage of U.S. Dollars on international markets.

That and the Fed's interest rate policy has had significant consequences for other currencies and economies. So much so the bank suggested in January it won't raise its interest rate again until it can gauge the true health of the global economy and impact further policy moves might have on it. 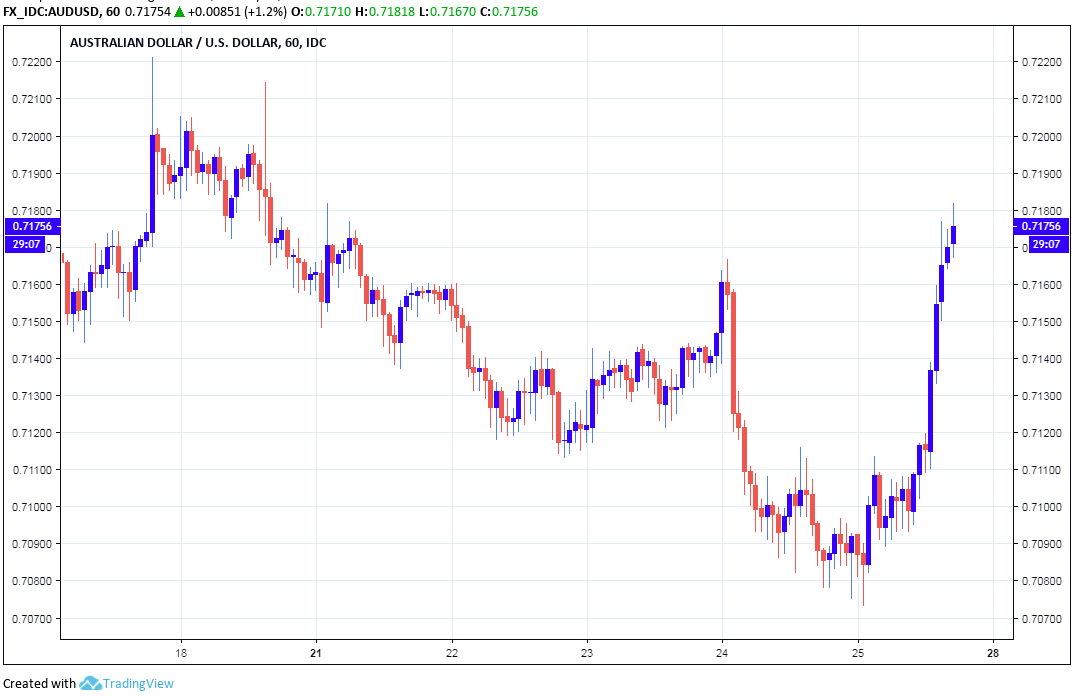 Why Does this Matter for the Aussie?

That U.S. Dollar shortage explains why Australian banks have been jacking up their mortgage rates in recent months, because they rely on U.S. Dollar financing from international markets in order to operate.

Analysts call those Dollars washing around in the financial system "liquidity" and it's that reduction in global liquidity that is part of the reason strategists have been forecasting a continued dire performance from the Australian Dollar over the coming months.

Friday price action may have been further encouraged by strong earnings reports released on Friday, which appeared to have tempered fears over the health of the U.S. and global economies.

Morgan Stanley's Redeker had argued earlier on Friday that clients should consider selling the Aussie relative to the British Pound, or buying the Pound-to-Australian-Dollar rate to profit from an anticipated escalation of Australia's domestic economic woes. However, if the Wall Street Journal is right, that idea might turn out to be a bad one. 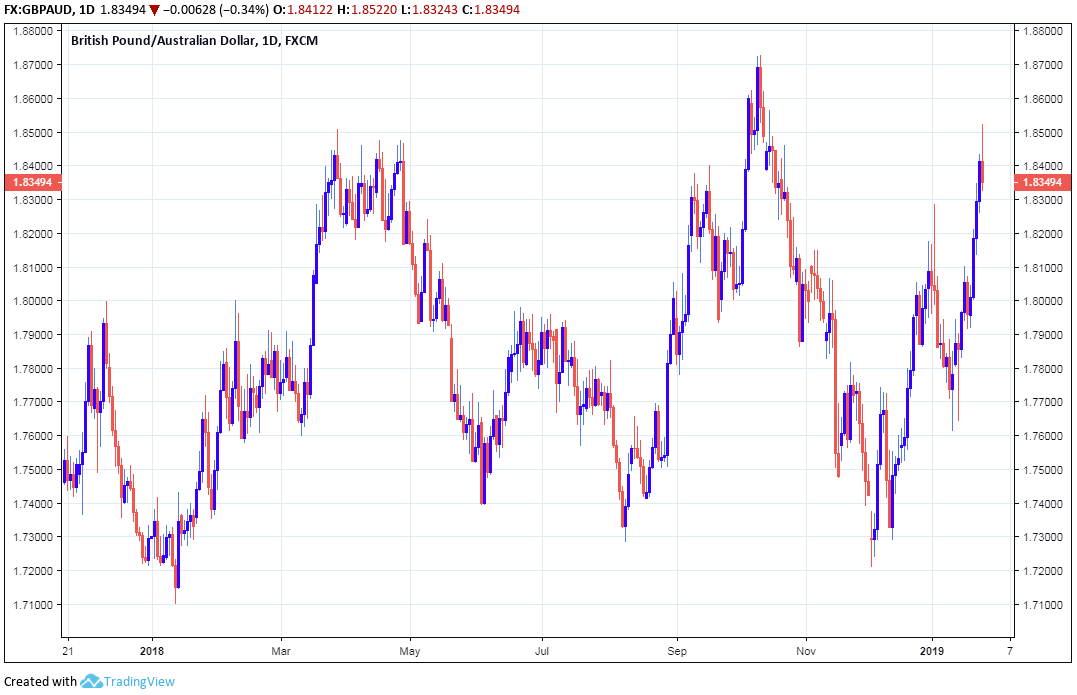 What Does a Fed Retreat Mean for the Aussie Now?

The Australian housing market has been creaking of late, with prices falling persistently in most major cities over the last year, leading new development projects to be abandoned and stoking fears that price falls could soon hurt household confidence and constrain spending.

Conditions in the housing market, as well as concerns over the broader economy, have been made worse of late by domestic lenders' decisions to begin raising mortgage rates in order to offset the impact of higher international funding costs. National Australia Bank (NAB) is the latest major lender to have joined the list.

Fears are that higher mortgage rates will simply lead to even lower house prices, lower levels of construction activity that reduce growth and hoover up money that would otherwise have been spent on things other than mortgages.

Such developments could further entrench Australia's below-target inflation problem, raising the odds of another Reserve Bank of Australia (RBA) interest rate cut and ensuring the Aussie Dollar remains on its back foot.

"AUD faces two significant headwinds: (i) the prospect for slower global economic growth, driven largely by softer economic momentum in the Eurozone; and (ii) Australian interest rate futures discounting a greater probability of a RBA rate cut this year," warned Elias Haddad, a strategist at Commonwealth Bank of Australia, in a note to clients on Friday.

The RBA has held its interest rate at a record low of 1.5% for over two years, citing below-target inflation and wage growth that is insufficient to support a sustainable return of inflation to the upper end of the 2%-to-3% target band.

But with U.S. interest rates at 2.5%, Canadian rates at 1.75% and with other central banks expected to hike their rates over the coming quarters, the RBA's policy stance has created an incentive for investors to dump the Australian Dollar and buy other currencies instead.

That explains in part the significant 9% loss sustained by the Aussie relative to the U.S. Dollar in 2018. Only an RBA rate hike will sustainably ease the pressure on the Aussie but below-target inflation, problems in the housing market and an uncertain economic outlook have made this unlikely.

If the Federal Reserve does go ahead and end the wind-down of its bond portfolio it won't solve Australia's problem with weak inflation, but it could lighten the load on the housing market and domestic economy, making another interest rate cut much less likely.

That is the reason the Australian Dollar performed strongly on Friday. Analysts at Australia & New Zealand Banking Group (ANZ) gave the following guidance to their clients Friday, before the Wall Street Journal article hit the wires.

"The market focus on the implications of a weaker housing market and higher funding costs, means softer data could drive capitulation in the AUD, as expectations rise that the RBA will change its tone in February. In this light, the CPI and business confidence data [due next week] are key," says Daniel Been, head of currency strategy at ANZ. 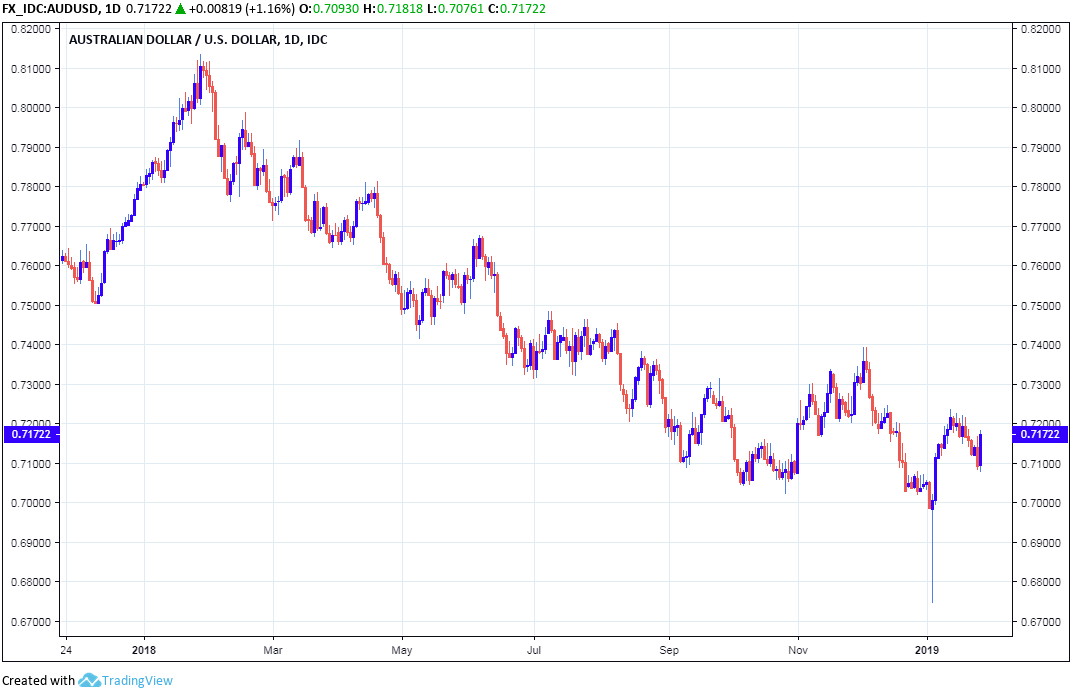