The Rand suffered heavy losses ahead of the weekend but it could be buffeted by a further wave of selling early in the new week as investors respond to Moody's decision to cut South Africa's credit rating to 'junk,' which could lift the Pound-to-Rand rate to fresh multi-year highs.

South Africa's Rand was sold heavily in a Friday session where emerging market currencies were out of favour with investors who were also uneasy ahead of the latest credit rating decision due from Moody's after the market close. Moody's, one of two agencies that must rate South Africa as an 'investment grade' borrower for the country to remain in the FTSE World Government Bond Index, cut its rating to Ba1 (junk) from Baa3 and maintained a negative outlook for the rating Friday.

Moody's downgraded South Africa's local and foreign currency ratings while maintaining a negative outlook, citing a "continuing deterioration in fiscal strength and structurally very weak growth" that it says is unlikely to be remedied by current government plans. This could see the Rand under further pressure this week and at a time when it's just fallen below a key level relative to Sterling, offering the Pound-to-Rand rate an opportunity to set its sights on levels not seen since January 2016.

Friday's whopping 3.79% gain for the Pound-to-Rand rate was aided by a sharp rebound against a weakening U.S. Dollar, and if that recovery from earlier losses continues on Monday then it could magnify the upside seen in the GBP/ZAR pair. Sterling has risen by 18.2% against the Rand so far in 2020 despite it also having fallen by high single digit numbers against other major currencies like the Dollar, Yen, Euro and Swiss Franc.

"It remains to be seen whether this will lead to an outflow of capital and rand depreciation and if so to what extent. The recent moves suggest that a lot has already been pre-empted and is priced in. Perhaps the market is even going to show relief about the rating downgrade as it will at least provide clarity on this front. One way or the other: due to the pandemic times are likely to remain tough for the rand," says Elisabeth Andreae, an analyst at Commerzbank. 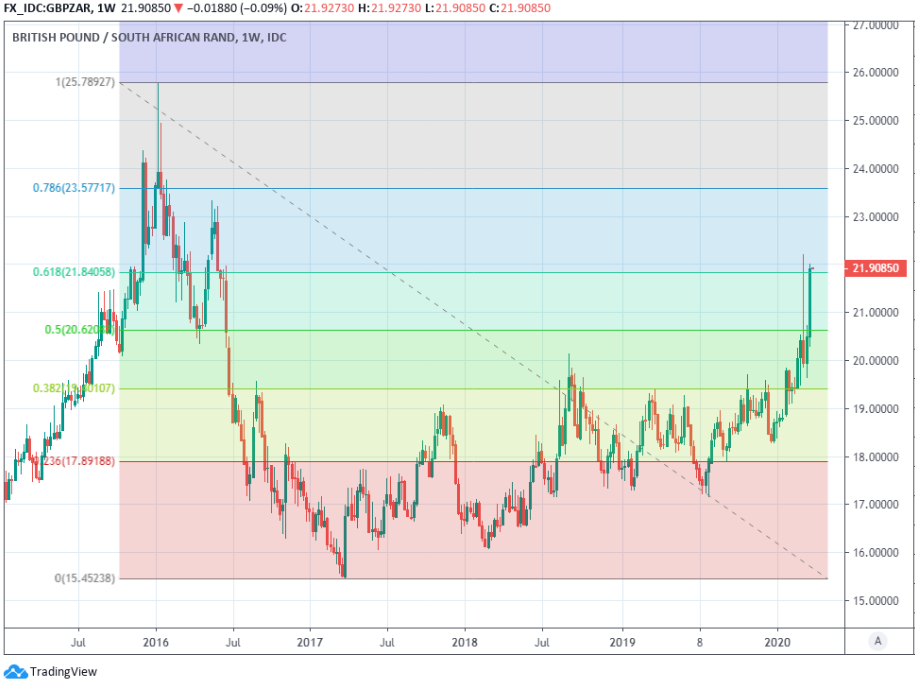 "Hold onto your hats on Monday, the rand will in all likelihood be setting its sights on breaching R18.00/$," says Bianca Botes, a treasury partner at Peregrine Treasury Solutions.

Friday's decision sets the government's bonds up for an end-April exclusion from the coveted FTSE index which will force international fund managers who benchmark to the barometer to sell their holdings. Foreign holdings of SA government debt were R316bn (£15 bn) in 2019 according to the statistical annexe included by Treasury in the February budget update, and it's possible a large portion of this could now be sold on the open market.

Markets had closed by the time the decision was announced so Sunday's open and Mondays' European session will be the first opportunity for many investors to respond to the downgrade, which was widely expected by the time it happened but could still incite a wave of selling this week.

"A downgrade will lead to an initial spike in USDZAR perhaps taking USDZAR 3%-4% higher initially (i.e. above 18.00 from current levels). Low liquidity in Asian trading hours on Monday could exacerbate the initial move," says Shahab Jalinoos, head of FX strategy at Credit Suisse in a research note last week.

No matter how loud the crash and bang in Rand exchange rates this week, some analysts expect the likely sell-off to prove short-lived because foreign investors have already sold around 20% of their total holding in South African government bonds since February. This means a part of the downgrade could already be in the price of the Rand, although some level of outflows and losses is inevitable given the overall foreign position remains large. 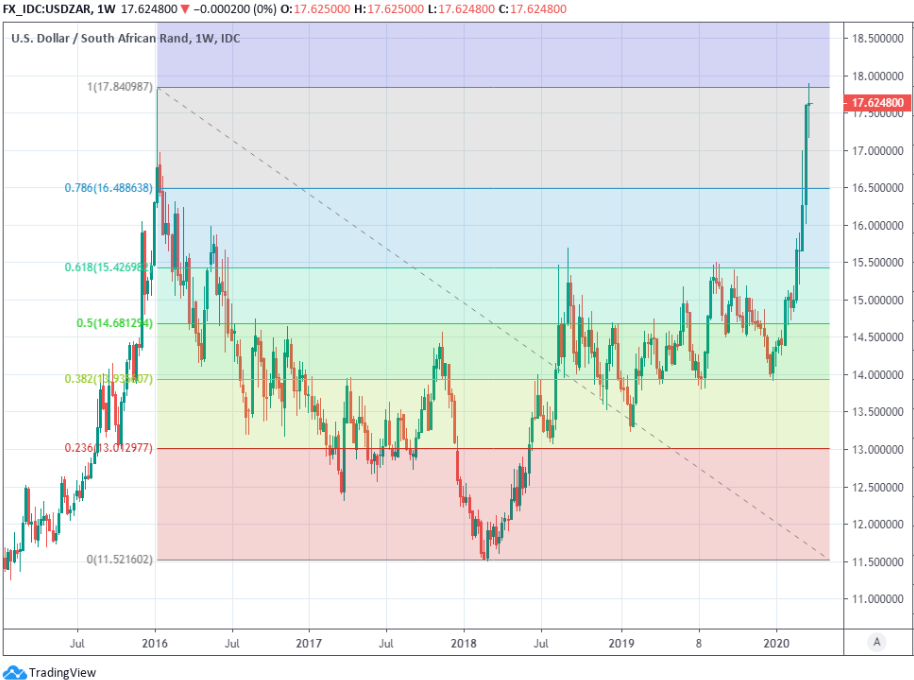 The international mood and investors' appetite for risk will also be a key driver of price action in the Rand in the week ahead and could be the difference between whether losses are sustained or recovered quickly. Key to this international mood will be the spread of coronavirus both domestically and across the globe, with investors seeking to gauge how long 'lockdowns' of citizens will remain in effect for in South Africa and further afield.

"Should risk sentiment sour again, MXN—this week’s EM outperformer—will likely have to give up some of its gains. Commodity-exporting EM high-yielders that have yet to surpass ‘severe’ undervaluation levels, and face rising concerns around domestic Covid-19 incidence—such as RUB and ZAR—may also be hit hard," warns Zach Pandl, co-head of FX strategy at Goldman Sachs.

South Africa was approaching the tailend of its first day in lockdown when Moody's downgraded the credit rating, with citizens confined to their homes except for in certain limited circumstances and many businesses closed as a result of containment efforts that are expected to deal a severe blow to an already-in-recession economy. The country has joined most major economies and many others across the world in calling a sudden economic stoppage in order to fend off the viral pneumonia.

The number of confirmed coronavirus cases had risen to 1,187 as of Saturday, according to the National Institute of Communicable Disease. This was as the global total rose above 666k, with 30.8k fatalities, according to Johns Hopkins University data. South Africa had the world's 37th largest outbreak at the weekend while the U.S. leap-frogged Italy to take the top spot after infections rose to 122k, although such rankings are heavily influenced by an uneven prevalence of testing at the international level.