South Africa's Rand underperformed the bulk of its emerging market rivals on Thursday, in line with the Chinese Yuan, and despite steep slump in the value of the Dollar both of which helped the Pound-to-Rand rate to climb above the 50% Fibonacci retracement of its January 2016 downtrend. That retracement, located at the 20.62 level, has been a tough nut to crack for Sterling given frequent bouts of weakness in the British currency.

Sterling crossed the 20.62 level on Thursday and whether it remains above there come Friday evening's close in New York will me a milestone development in the outlook for the Pound-to-Rand rate. And there's a good chance this will happen if analysis from Credit Suisse is right about South Africa's credit rating prospects. Moody's will decide on Friday whether to leave the South African government rating at 'investment grade' or to downgrade it to 'junk'.

"Moody’s will publish its rating decision after local markets close on Friday (27 March). When Moody’s conducts its coming review, South Africa government’s debt dynamics will look much worse than it did a few weeks ago," says Shahab Jalinoos, head of FX strategy at Credit Suisse. "A downgrade will lead to an initial spike in USDZAR perhaps taking USDZAR 3%-4% higher initially (i.e. above 18.00 from current levels). Low liquidity in Asian trading hours on Monday could exacerbate the initial move." 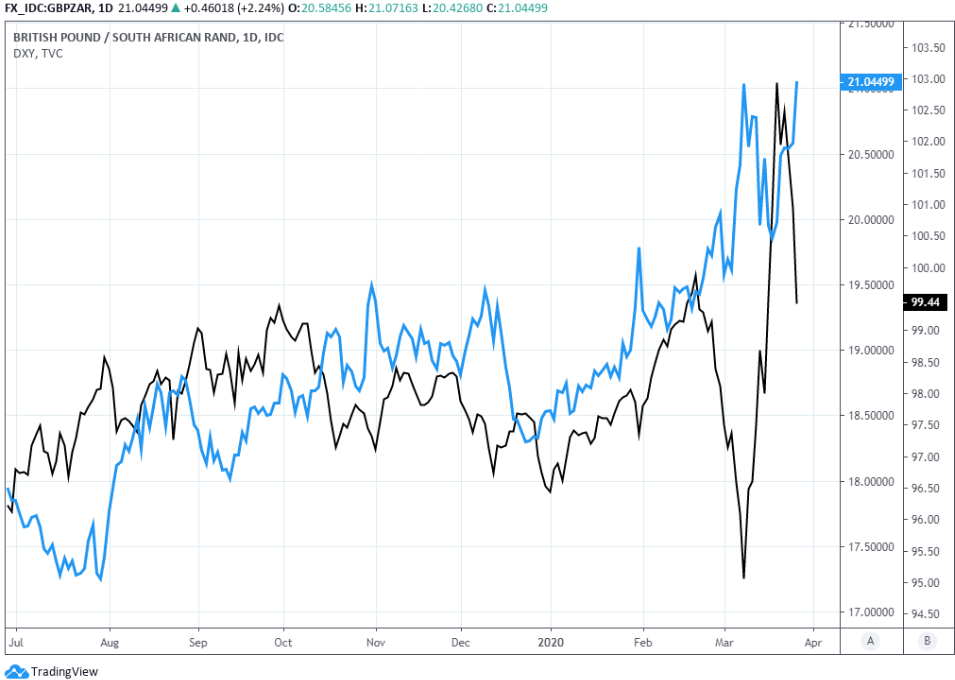 Moody's is the last major agency to still have South Africa as an investment grade borrower and crucially, it is one of two that must rate South Africa as such a high quality borrower for the country to remain in the FTSE World Government Bond Index, once known as the Citi World Government Bond Index. And without inclusion in that index international fund managers who benchmark to it would be compelled to sell their South African government bonds, potentially inciting large outflows from the currency.

Foreign holdings of South African government debt were R316bn (£15 bn) in 2019 according to the statistical annexe included by Treasury in the February budget update and it was always thought that a large portion of that debt would end up being sold on the open market following a downgrade. However, foreign outflows from South Africa have picked up sharply in the last month since the budget and so much so the Rand may already have paid part of the price of a Moody's downgrade. Jalinoos says there's been around $4bn (£3.3bn) of outflows since February 20, which is equal to around 20% of foreign holdings.

"We could imagine a potential spike in USDZAR to be temporary and short-lived in the context of a market which already saw substantial unwind of positioning," Jalinoos writes in a research note Thursday. "We believe that at least part of the aggressive selloff in local bonds in the past few days is a result of pre-positioning for a downgrade."

Jalinoos says the outlook for the rating has darkened in recent weeks due to the outbreak of coronavirus in South Africa, which will reduce GDP and necessitate higher government spending in the form of welfare payments and assistance for companies. That will mean a larger budget deficit and a higher debt-to-gdp ratio that's exactly the opposite of what Moody's has been looking for. And this is after the February budget already revealed an earlier deterioration. However, Jalinoos also says that due to the exceptional circumstance thrown up by the coronavirus, Moody's could decide to defer the rating decision until a later date. 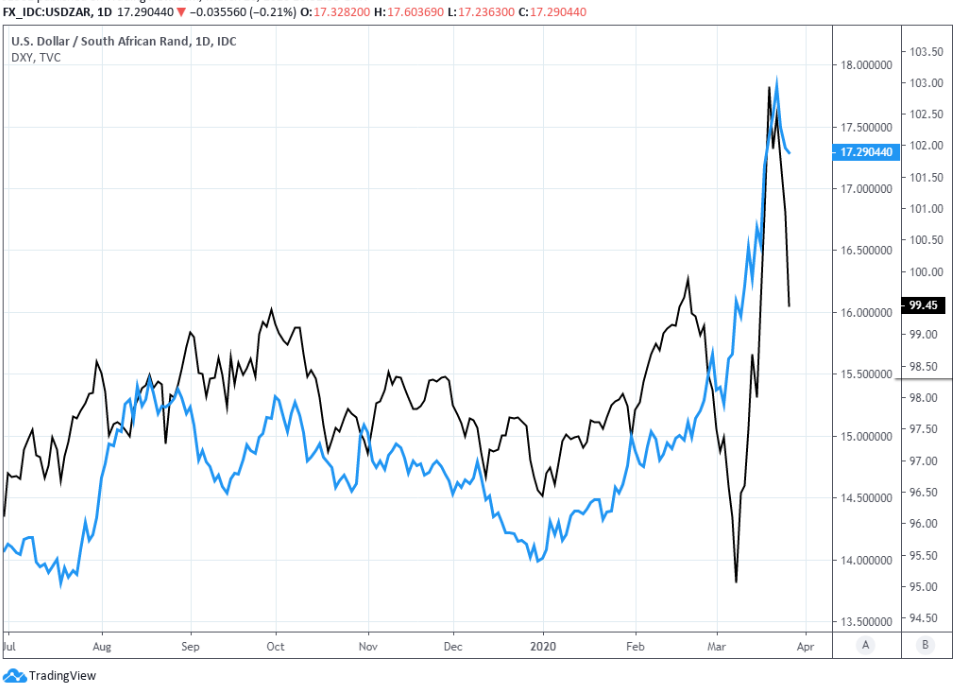 Coronavirus has spread rapidly in South Africa since first being detected two weeks ago, with more than 700 cases declared by the National Institute for Communicable Disease on Thursday, leading President Cyril Ramaphosa to declare a 'lockdown' of citizens that will be enforced by the police and National Defence Force. Such draconian confinements of citizens to their homes requires the closure of many businesses and will inevitably deal a severe blow to an already-in-recession economy, and for that reason the Rand might be at risk of continued underperformance even if the losses associated with a downgrade are now likely to be less than was previouls the case.

"The country’s limited fiscal leeway to soften the expected hit to the economy from Covid-19 may have been the factor that led the central bank to act more aggressively than markets expected," Jalinoos says.

The USD/ZAR rate reached a new record high on Monday but has since retreated amid weakness in the Dollar and is tipped by technical analysts to "consolidate" between the 17 and 18 levels over the coming days and weeks. The Pound-to-Rand rate however, has remained on a steep upward trajectory this week and overcame the 20.62 Fibonacci retracement of the January 2016 downtrend Thursday which could soon become a support level for Sterling if the exchange rate closes above it this week.

Dollar weakness has enabled the GBP/USD rate to recover from some of its earlier steep losses which, given only modest declines in the USD/ZAR rate, has pushed the Pound-to-Rand rate up by more than 5% this week alone. And a close above that level might then see the exchange rate set its sights on 21.84, the 61.8% retracement of the same downtrend, which would leave Sterling with a more-than 17% 2020 gain over its South African counterpart. 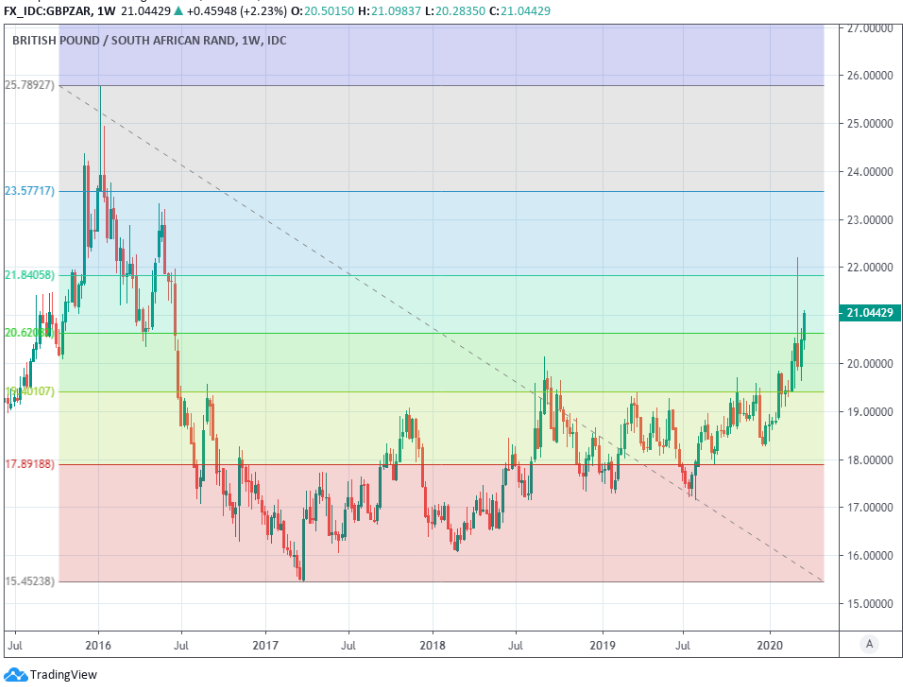