- ZAR is a buy at Bank of America on trade developments.

- Offers breathing space to emerging markets and the ZAR.

- Moody's downgrade of SA rating to 'junk' already in price.

The Rand softened in the opening session of the new week after President Donald Trump cast doubt over the prospects of a trade deal being reached with China over the coming weeks, although the South African currency is being tipped as a buy at Bank of America Merrill Lynch.

Investor risk appetites were faltering Monday after President Donald Trump cast doubt over the extent to which that agreement is likely to roll back tariffs already imposed on goods imported from China. He told reporters on Saturday there's been a lot of incorrect reporting in the media about the state of the trade negotiations and that the "level of tariff lift" floated in the press is incorrect. He also said that he wants to "make a deal, but it's got to be the right deal".

Trump's comments came at the tail end of a week which saw global markets advance strongly, with U.S. stocks setting new highs, after reports attributed to Chinese officials and the country's Commerce Ministry led investors to believe last week that not only could new levies due to go into effect on December 15 be cancelled, but also that some of September's tariffs may be removed.

"The key benefit for EMFX from a trade deal (in combination with Fed very unlikely to hike) would be to cap the risk of a further USD overshooting. We do not see a major move in terms of EUR/USD (1.15 end-2020), but a sideways moving DXY would likely be good enough for yield-starved investors to become more comfortable with EMFX," says David Hauner, a strategist at Bank of America. "FX markets like ZAR could benefit from equity inflows given that equities are the asset class likely to benefit most from some green shoots." 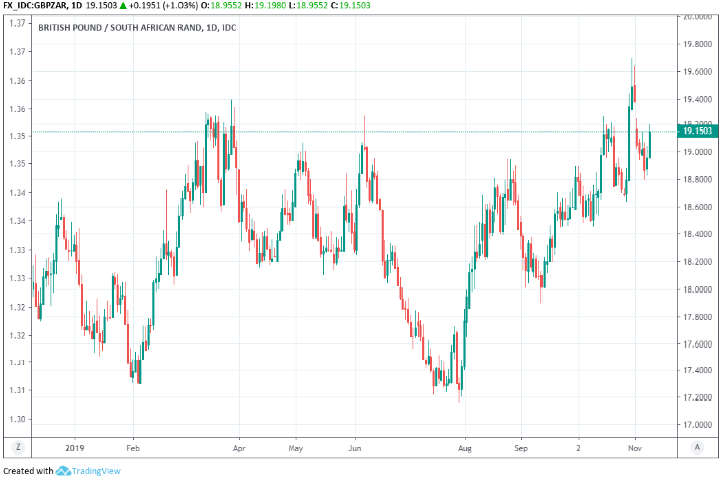 Bank of America says investors have been too dismissive of the positive effects that a deal could have on emerging market financial assets, and that such a thing would boost currencies like the Rand by containing a strong U.S. Dollar and prompting a bid for local stocks. The two sides have been attempting to finalise a 'phase one deal' agreed in principle on October 11, which has eased investors' concerns about the global economic outlook and soothed world markets in recent weeks.

Hauner cites results from Bank of America's Global Fund Manager Survey for thinking investors have been 'underweight' the developing world this year, with fears over the global economic outlook seen behind the reluctance to take a chance on riskier emerging market stocks even as global markets, notably those in the U.S., have set new record highs.

The implication is that if negotiators strike a deal that ends the tariff fight, which has hurt the global manufacturing sector and led to slower growth the world over, investors might the be more willing to take a punt on emerging markets. Hauner has advocated that clients sell the safe-haven Japanese Yen and buy the Rand with the proceeds in order to take advantage of the anticipated improvement in risk appetite up ahead. 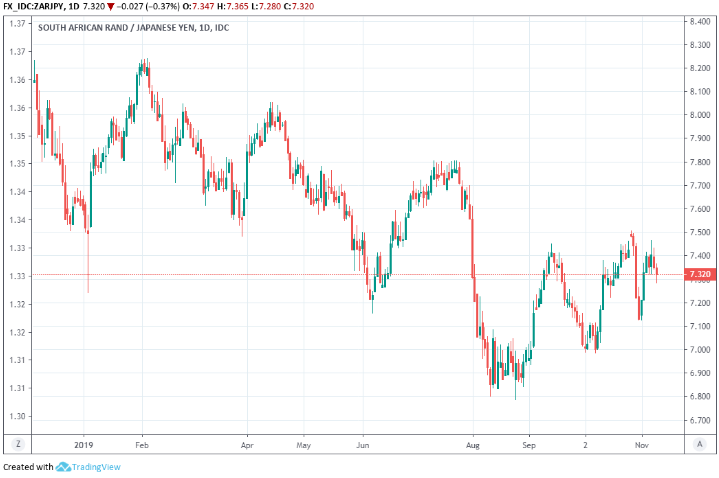 "We go long ZAR/JPY as JPY should weaken in global risk-on. Moreover, the daily MACD technical indicator just triggered a "buy" signal. We enter at 7.41 with a target at 8.00," Hauner writes, in a note to clients. "The risk to this trade is that the trade talks falter yet again, and markets start to fear serious global recession risks for 2020."

South Africa's Rand has been crushed this year by both domestic as well as international factors, The trade war and resulting slowdown in the global economy have boosted the value of the safe-haven Dollar, which had already been lifted in the prior quarters by 'yield-seeking' flows of capital drawn toward the greenback by a Federal Reserve interest rate that reached 2.5% in December 2018 and which still sits at 1.75%.

A stronger Dollar raises the cost of new and existing debts for emerging market economies, which tend to borrow more in foreign currencies than their developed world counterparts due to the volatile nature of their domestic currencies, so anything that takes the froth out of U.S. rates would be a positive economically for South Africa. However, the Rand will also have to contend with a series of debilitating domestic risks in the months ahead, although Bank of America is unfazed by these. 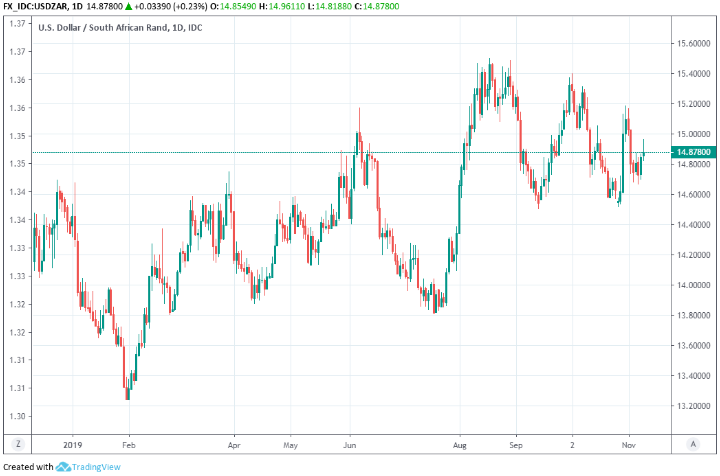 "Our baseline is for Moody's to downgrade to sub-investment grade after the February budget but we believe this is priced in, and there should be a hiatus on negative fiscal headlines until then. We project on small remaining potential outflows of $1.5bn. We forecast the budget deficit at 6.4% of GDP in FY19 and 6.9% in FY20 (Treasury: 6.2% and 6.8%)," Hauner says.

Moody's changed its outlook on South Africa's investment grade rating to negative this month but left the rating itself in place, sparing the country from the exodus of foreign capital that would come with a downgrade to 'junk'. But Hauner forecasts the agency will strip South Africa of the rating upon its February review, although he says the decision is largely priced into the Rand.

Just less than half of South Africa's government debt is held by foreign fund managers and some of those will no longer be able to keep it in their portfolios if the country loses its last remaining top credit rating, which could mean they will be forced into selling it early next year. Moody's has demanded the government produce a "credible fiscal strategy" that reigns in the spiralling budget defict and the stems the increase in the national debt pile to avoid a downgrade, but there's been little sign of a game-changing strategy thus far.