- After falling to floor of large long-term trading range.

- ZAR to be moved by oil prices and SARB meeting.

The Pound-to-South-African-Rand rate was trading around 18.24 at the beginning of the new week after closing the previous one -0.23% lower on Friday and studies of the charts suggest there's a risk of more downside ahead if a tough zone of support 17.89 gives way over the coming days.

The 4 hour chart, used to determine the short-term outlook over the coming week, shows the pair recovering nicely after bottoming at the September 04 low, although the recovery is not yet strong enough to indicate a trend reversal.

Furthermore, the pair has now managed to cut through a tough zone of support between 18.30 and 18.00. Now, and subject to confirmation from a break below 17.89, the market should continue lower to our next target at 17.50. 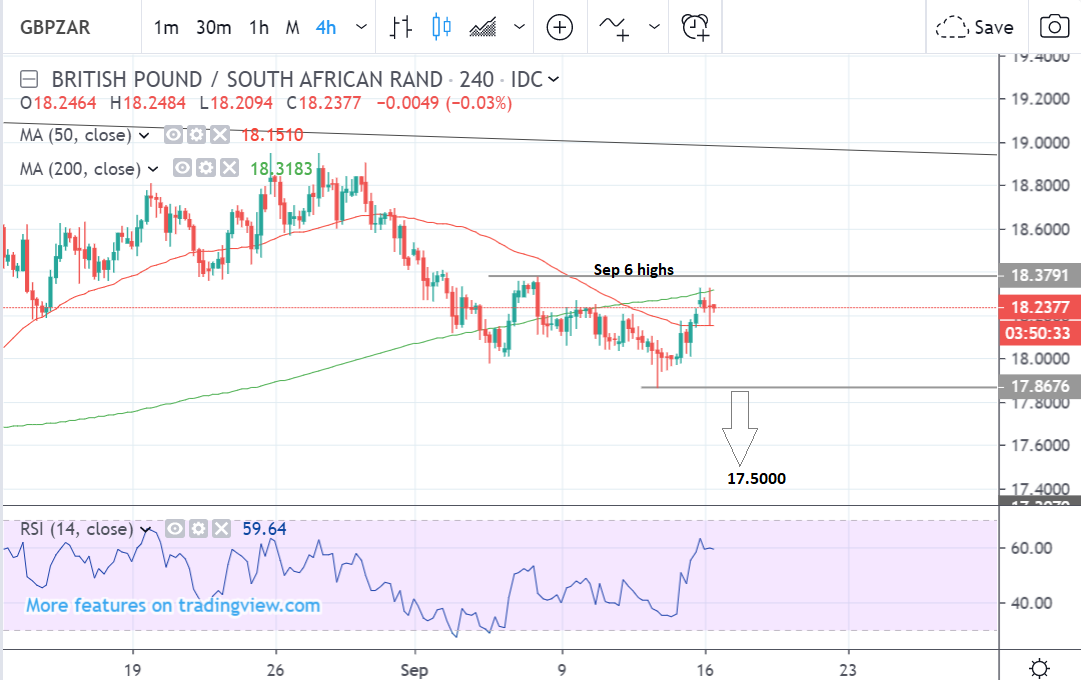 The daily chart shows the pair having bounced strongly after touching the 50-day moving average (MA). It has now also just recovered back up to the level of the 200-day average, where it has encountered resistance.

Assuming a successful break below the September 12 low at 17.95, the pair could go all the way down to its longer-term range low situated at 17.30. The daily chart is used to give us an indication of the outlook for the medium-term, which is defined as the next month ahead. 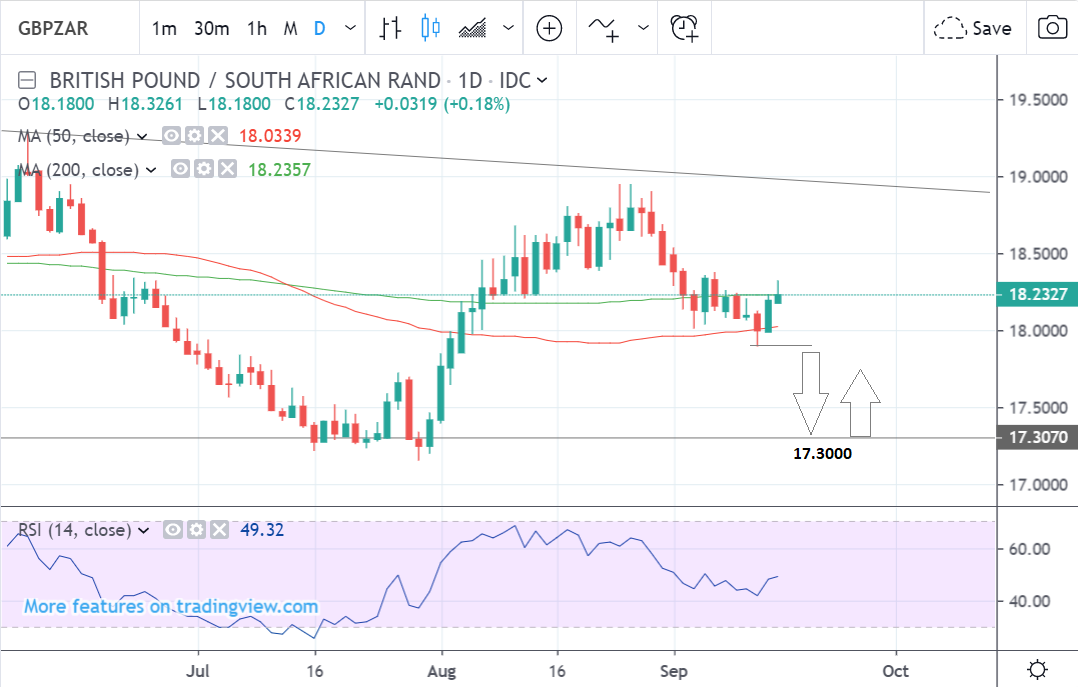 The weekly chart shows the pair in a large and long-term sideways range. If the market successfully breaks below support at current levels, it;ll reach the July low at 17.30 before a likely rebound back to the sloping high at 18.75.

The weekly chart is used to give us an indication of the outlook for the long-term, defined as the next three months. 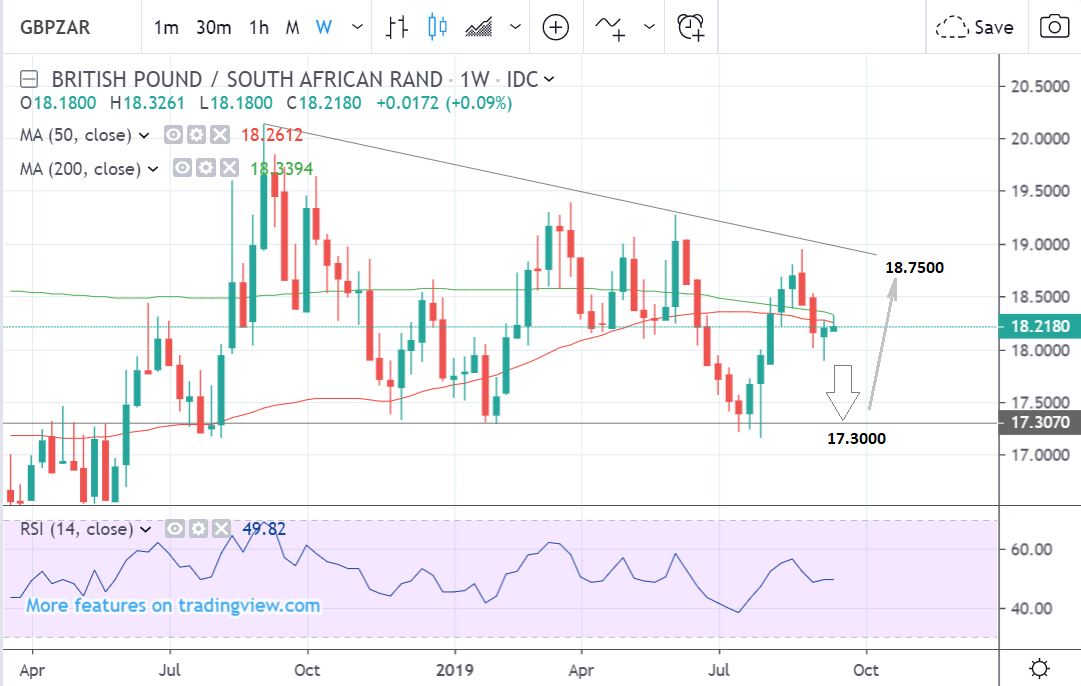 The main drivers of the Rand to look out for in the week ahead are the volatile price of crude oil, the monetary policy decision of the South African Reserve Bank (SARB) and the U.S. Federal Reserve (Fed) interest rate decision that will dictate fluctuations of the Dollar.

Rising oil prices have hurt the Rand and will continue to if they remain elevated. Oil spiked to $65 overnight after a drone strike on a Saudi oilfield disabled at least half of the country’s production capacity. Rising prices lead to higher inflation and slower economic growth. They also require South African's to sell more Rand on the market in order to import crucial energy products.

“SA is an oil importer and the surge in the oil price is negative for the country, particularly from an inflation point of view, if it is sustained. Additionally, the rand tends to be highly risk-averse, typically depreciating significantly in the face of negative market news,” says Annabel Bishop, chief economist at Investec.

The SARB has its September policy meeting on Thursday at 14.00 BST, which could impact the Rand. The SARB is not expected to cut rates this week but may iject a more pessimistic tone into its guidance about the future, which might weigh on the Rand. However, the SARB will play second-fiddle to the Federal Reserve, which is expected to cut U.S. borrowing costs this week as well as provide details of the likely extent to which the Fed Funds rate will be cut again over the coming months.

"Market expectations of further easing in US interest rates are likely bolstering the rand to a meaningful degree, with the rand’s depreciation since Friday not particularly substantial compared to previous historical movements in the domestic currency," Bishop says. "Indeed, markets are still pricing in a 49% chance of a cut at the FOMC meeting on 12th November, with around a 30% chance of a 25bp easing in the Fed’s target rate in 2020. Such a lowering of US interest rates would also be supportive of a further 25bp cut in SA’s repo rate, given both the subdued domestic inflation and growth environment."