- Going to be tough until price breaks below 17.95

- Rand to be moved by risk markets

The Pound-to-Rand exchange rate is trading at around 18.39 at the start of the new week after declining 1.4% in the week before and studies of the charts now indicate that the pair's recent short-term uptrend has probably reversed and is set to go lower.

The 4hr chart - used to determine the short-term outlook which includes the coming week or next 5 days - shows the pair falling after peaking at the recent August 27 highs. 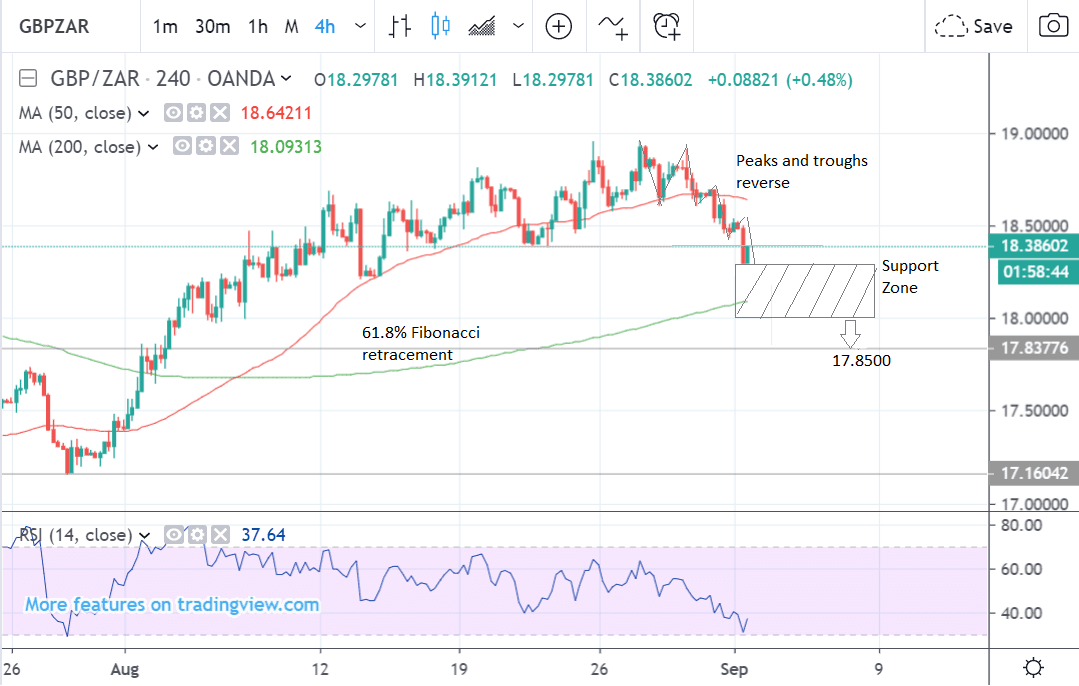 It has now probably started a new downtrend after completing two lower lows and lower highs a sign often taken as evidence of the start of a new bear trend.

Given the saying ‘the trend is your friend’ the pair would normally be expected to go lower, however, in this case a tough zone of support lies directly under the current market level and could resist further declines.

A break below the 17.95 level would probably signal that the support zone had been surpassed and open the way to easier declines.

One possible target to the downside is at 17.85, which is at the 61.8% Fibonacci retracement of the rally during August.

Fibonacci retracements are levels on the charts where a correcting market often finds support. They are essentially percentage retracements from former peaks. The 61.8% retracement, which is related to the famous ‘golden mean’ of mathematics, is one of the most powerful.

The daily chart shows why we see a support zone lying under the current market level - both the 50 and 200-day moving averages (MA) are situated in the zone, at 17.99 and 18.23 respectively, and these are likely to provide strong support. 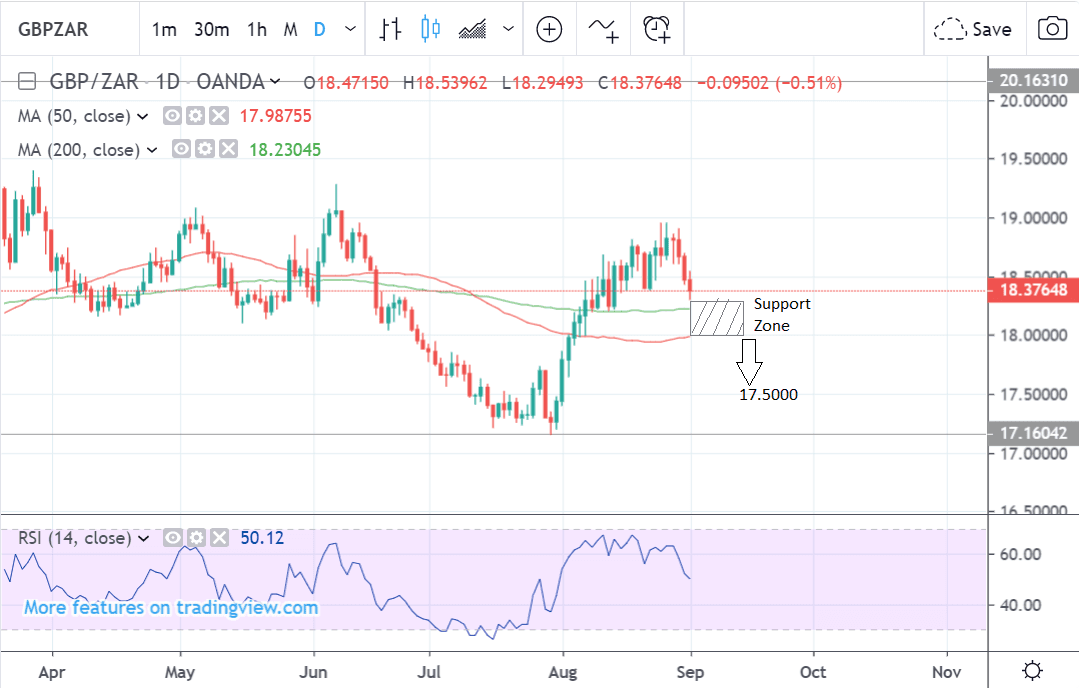 Assuming a successful break below the zone the pair could go all the way down to a target at 17.50.

The weekly chart - which is used to give us an indication of the outlook for the long-term, defined as the next few months - shows the pair in a large, long-term, sideways range. 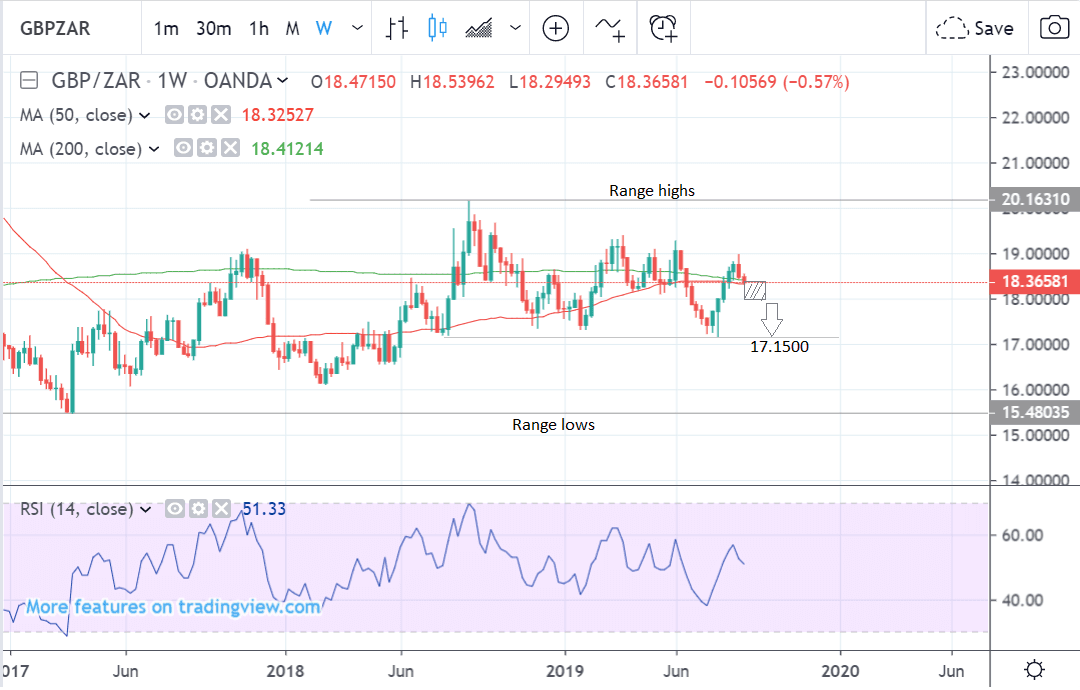 If GBP/ZAR carries on falling, as the short-term charts suggest, it could eventually reach the July lows at 17.1500.

The main drivers of the SA Rand are likely to global risk trends, the value of the U.S. Dollar which is highly negatively correlated to the Rand, Q2 South African GDP on Tuesday, and current account data on Friday.

Global risk trends were subdued on Monday after new U.S. - China trade tariffs came into effect; S&P 500 futures were down 5 points, and gold, another key barometer of risk, was up $3 an ounce.

Higher tariffs were implemented by both U.S. and China over the weekend, although many of the promised tariffs on goods will not come into effect until December 15.

China was described by many commentators as adopting a ‘less punitive approach’ to tariffs on U.S. products than it might have, which may have eased market sentiment and supported the Rand.

“The proportion of tariffs that kicked in on Sunday only account for about one third of the more than 5,000 product lines listed in the latest announcement. The majority of the duties will take effect Dec. 15, and China’s plans to reinstate tariffs on U.S. autos and auto parts will also not take place until that time,” says Evelyn Cheng of CNBC News.

Despite the overall marginally negative risk tone of markets on Monday the Rand was actually up against the Pound due to the latter being pressured by increasing Brexit concerns after Boris Johnson warned rebel conservative MPs that they would be sacked if they voted against the government in an expected vote of no confidence once MPs return from their summer recess on Tuesday.

Recent reports that number 10 has called an emergency cabinet meeting has ramped up speculation he may be about to call a general election since he only currently commands a majority of 1 in parliament which could easily be overturned.

One positive result for global risk appetite and, therefore, the Rand, was recent Chinese Caixin manufacturing PMI data which snapped its losing streak and surprisingly rose back above 50, the level which distinguishes expansion from contraction. Caixin PMI differs from the official manufacturing PMI because it covers small and medium sized companies.

China Caixin PMI Manufacturing rose to 50.4 in August, up from 49.9 and beat expectations of 49.8. Caixin noted a marginal expansion of output. New orders were broadly stable despite further decline in export sales.

On the domestic data front, the next main release is SA Q2 GDP which is expected to show a 0.8% quarter-on-quarter and 2.0 annualized rise, when released at 10.30 BST on Tuesday.

A strong GDP print is expected as “mining production, manufacturing output and electricity distributed rose on a q/q basis. Meanwhile on the demand side, the q/q trade sector output also increased,” says Peter Worthington, an economist at ABSA.

Another release is the SA current account which is forecast to show a -3.0% of GDP deficit in Q2, however, this estimate may now be too high, since data today showed the merchandise trade deficit, a major component of the current account, undershot expectations and fell into negative territory.

The current account often impacts on the value of a country’s currency with a deficit being negative for the unit. In this case, however, the impact is likely to be minimal as the current account, though in deficit territory, remains relatively shallow by historical standards.

The U.S. Dollar was was the strongest G10 currency on Monday although the U.S was off for labour day. The main release for the U.S. currency is non-farm payrolls on Friday.