- After triangle completes it is likely to break higher

- Rand to be moved by CPI and global risk appetite

The Pound-to-Rand exchange rate is trading at 18.58 at the time of writing, down 0.80% on the day in line with broad-based Sterling weakness.

However, the exchange rate had rallied 1.32% in the week before, and our technical studies of the charts suggest the pair will probably continue higher in the short-term.

The 4hr chart - used to determine the short-term outlook which includes the coming week or next 5 days - shows the pair rising within a longer-term range. 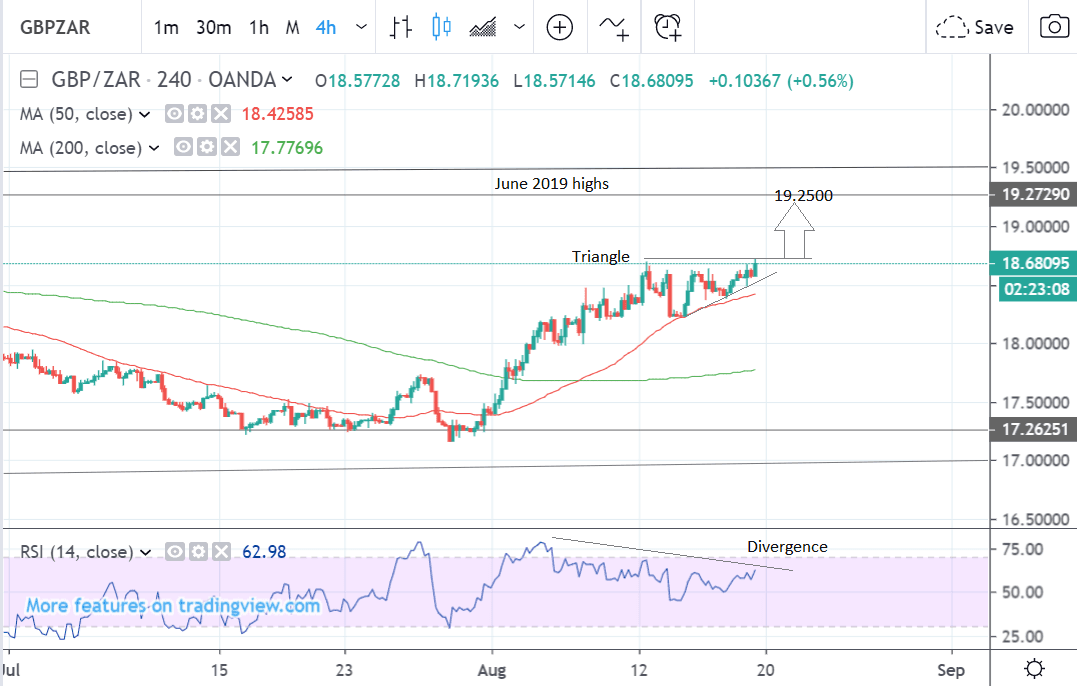 More recently it has been consolidating in a triangle pattern but it looks almost finished and after that it will probably break to the upside.

The triangle is a right-angled which means one of the edges is flat, and this variety of triangle has a greater chance of breaking out in the direction of the flat edge, which in this case, is higher.

Whilst the RSI momentum indicator is diverging with the exchange rate which means it is not rising when price does. This is a bearish sign but it does not alter our overall expectation that the pair is likely to continue rising.

The daily chart shows how the pair has successfully broken above both the 50 and 200-day MAs in the early 18s and is likely to go higher. These would normally be expected to present prices with a tough ceiling of resistance but since the exchange rate has broken clearly above them the way is now open to more upside. 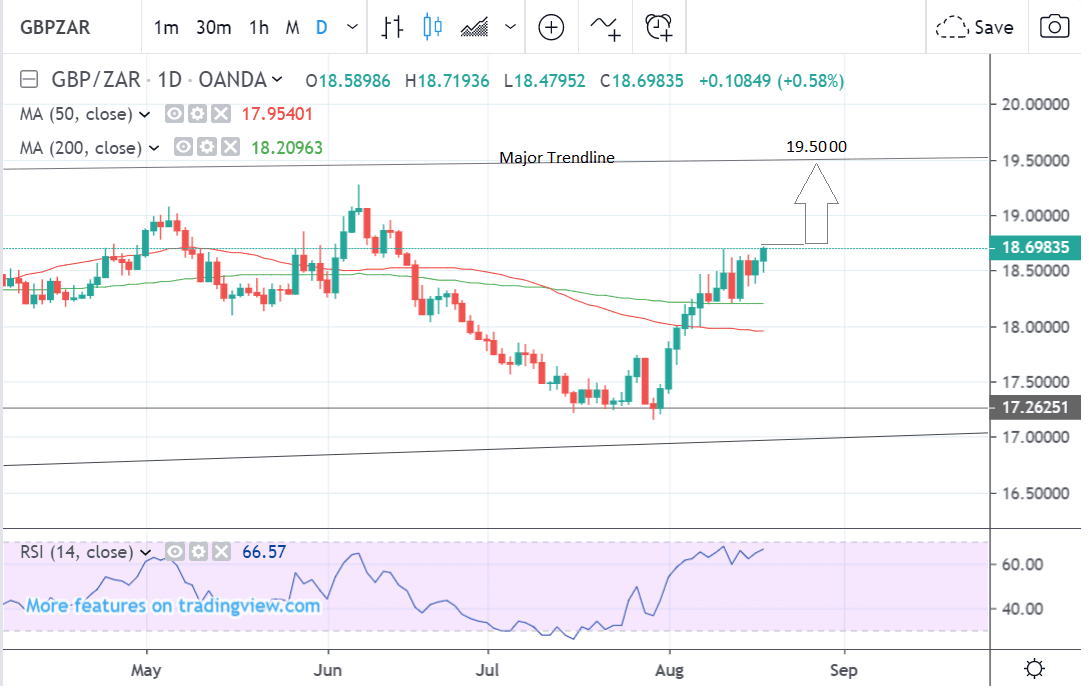 The weekly chart - used to give us an indication of the outlook for the long-term, defined as the next few months - shows how the pair could rise all the way to a target at 20.000 and the August 2018 highs over the long-term. 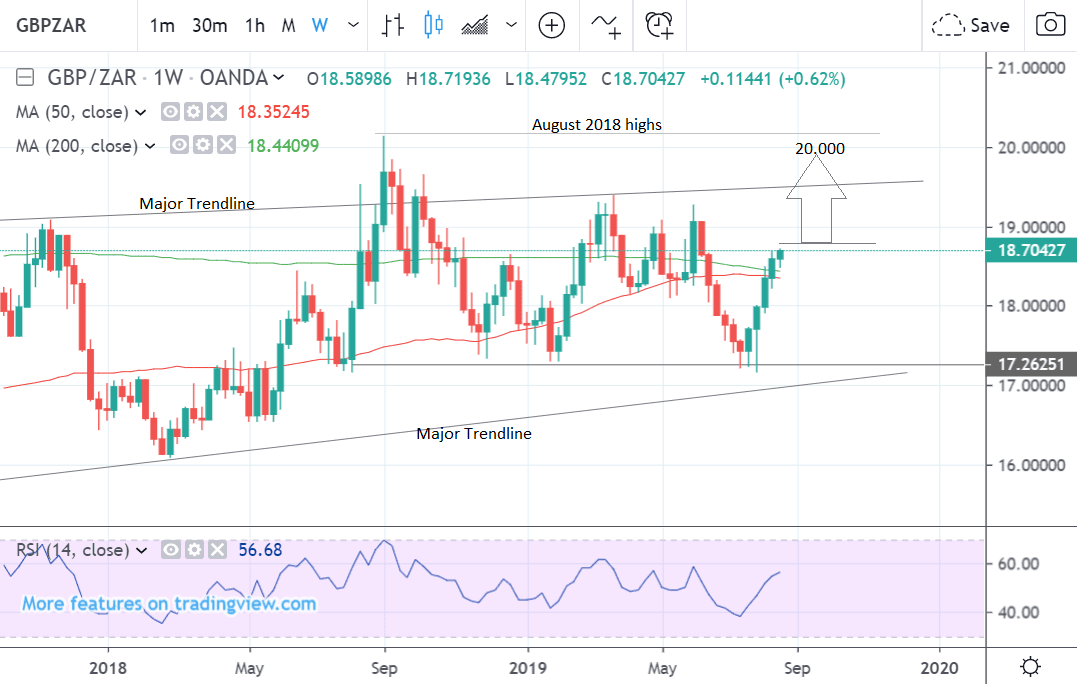 The main releases for the Rand in the week ahead include July inflation data on Wednesday, the South African Reserve Bank’s (SARB) leading indicators on Tuesday, and Resident Ramaphosa’s session with the national assembly on Thursday.

On the non-data front, the currency will also be impacted by the U.S. Dollar to which it is highly negatively correlated.

“Core inflation is likely to slow in July mainly due to weak domestic demand and to a lesser extent base effects,” says Peter Worthington et al, economists at ABSA, which suggests a negative risk for the Rand from a lower-than-expected result.

The SARB leading indicator, which stood at 103.9 previously, will provide analysts with something on which to base an early expectation of GDP, which could also impact the Rand. Low growth is negative for a currency and vice versa for high growth.

“The leading indicator has been at levels consistent with weak economic growth. We will be waiting to see what the index signals in terms of near-term GDP growth,” says Worthington, in a client note ahead of the release.

Also of impact on the Rand could be Ramaphosa’s Q&A with policymakers on Thursday where he is expected to defend his plans to revive economic growth and deal with high unemployment.

The more concrete his plans are, the better for the Rand as the currency appreciated strongly following his re-election based on the firm belief he would bring pro-reform, pro-growth agenda to the job.

The main event for the U.S. Dollar could be the speech by Federal Reserve governor Jerome Powell at Jackson Hole and whether he signals the likelihood of more easing in September, which now looks highly likely.

If he does, it will be negative for the Dollar but positive for the Rand, since lower rates generally weaken the USD because they tend to attract less inflows of foreign capital.

The Rand is also sensitive to general global risk appetite like most emerging market currencies.

Market sentiment could also be bolstered on the trade front if there is news regarding Huawei whose temporary license is about to expire.

Reuters reports that the U.S. is expected to extend the license for another 90 days, which would likely be seen as a positive development by markets, and the Rand.

Investor risk appetite has been supported by recent reports from Germany that the government is contemplating the use of fiscal stimulus to support its slowing economy.

“Risk assets ended what was an extremely volatile week on a positive note. Der Spiegel reported that the German finance ministry was preparing to abandon its balanced budget rule in the event of a German recession,” says Nick Smyth, an analyst at BNZ.

The current climate of low growth and low yields is partly because all the heavy lifting of stimulus has been left to central banks who are running out of ammunition.

The German move might encourage more politicians from other countries to increase fiscal stimulus which may be read as positive (depending on the country and its circumstances), which could support the Rand.

“The reaction shows that markets are extremely sensitive to the outlook for fiscal policy, which would take some of the burden off monetary policy in supporting the economy. Global bond yields are at extremely low levels in part because of a global excess of saving over investment, and more activist fiscal policy would help address that balance, in addition to reducing the need for central banks to ease policy as aggressively,” says Smyth.

Brexit risks are rising as many rebel MPs don’t want a caretaker government to be headed by Jeremy Corbyn splitting up the opposition to a ‘no-deal’ Brexit and reducing its ability to prevent the UK crashing out on October 31.

The probability of a no-deal is now 40% and although this is a negative risk factor for the Rand it is more negative for the Pound, and since this is an analysis of GBP/NZD, worsening Brexit risks are likely to bring the pair down overall despite also weighing on risk appetite more generally.