- ZAR slides on cocktail of domestic and international concerns.

- Speculation over an IMF bailout dismissed by SARB governor.

The Rand sank against the Dollar and Pound Friday in response to a cocktail of adverse headlines both international and domestic, although analysts are turning increasingly cautious in their outlook and Commerzbank says the charts are arguing for more downside in the South African currency up ahead.

Emerging market currencies tumbled from the opening bell in London and were still under substantial pressure into the final hours of the New York session after President Donald Trump again lamented the strong U.S. Dollar before hitting out at China and the Federal Reserve (Fed). He said of the trade war between the world's two largest economies; "We're not ready to make a deal".

Trump told reporters outside the White House that a September round of talks aimed at ending the trade war may not happen due . He was quoted by Bloomberg News saying "“If we do, that’s fine. If we don’t, that’s fine.”

"Trump’s pledge to impose 10% tariffs on all remaining Chinese imports escalated the trade dispute between the world’s two largest economies. But it was the Chinese government’s subsequent decision to let the yuan depreciate—sparking fears of a currency war—that really scared markets," says Josh Nye at RBC Capital Markets.

Escalating trade tensions have roiled global markets this week but particularly those in the emerging world including South Africa, which counts China as its most significant trade partner and is suffering economic and financial pressures of its own. The Rand was the biggest casualty of the emerging market currencies Friday and by a country mile too as investors sold out of South African government bonds in response to mounting concerns over political, economic and financial stability.

The USD/ZAR rate rose more than 1.5% to 15.26 in the Friday session, denoting Rand weakness, although other emerging market currencies including the Turkish Lira, Argentine Peso and Indian Rupee each fell less than half that in the final session of the week. That underlines the significant extent that losses were domestically motivated. Another example of the extent to which the Rand has weakened was the Pound-to-Rand rate on Friday, which saw a Brexit-battered British currency best its rival. 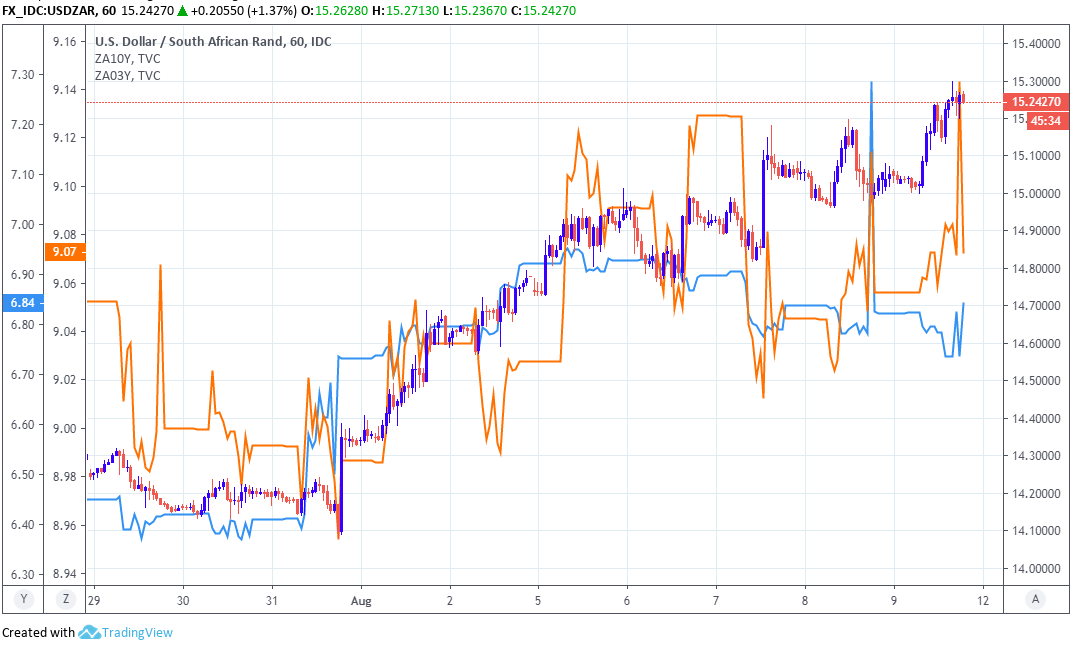 orange and blue lines). Yields spike as bond prices fall amid exodus of investors from market.

Speculation has been rife in the final session of the week that South Africa might eventually need to request an International Monetary Fund (IMF) bailout if the government cannot put right the capsized ship that is the ailing power utility Eskom, which is threatening an already-embattled economy. Eskom recently admitted it has RS440 bn of debt, a significant portion of which the government is on the hook for if the company fails, and has had to request urgent financial support from the taxpayer twice in 2019.

"The state-owned company is seen as the biggest risk to the economy and some see the potential for a sovereign debt crisis," says Elisabeth Andreae, an analyst at Commerzbank. "Negative comments from rating agencies and a downgrading of an agency's rating outlook to negative raise concerns that South Africa's sovereign rating could be downgraded to junk."

South African Reserve Bank (SARB) Governor Lesetja Kganyago spoke out on the subject Friday, according to News24, saying the country is "not there yet" but that the government has to make "hard decisions" if it wants to avoid the IMF. Those hard decisions were a reference to spending cuts, tax rises and asset sales that might need to take place if South Africa is to reign in its budget deficit and keep its last remaining 'investment grade' credit rating assigned by Moody's.

"Though we have determined that the market is already priced for aggressive rating action, we think this would only help reduce the negative implications of a Moody's downgrade in the short term, not eliminate them altogether," says Cristian Maggio, head of emerging markets at TD Securities. "A downgrade by Moody's would mark the transition from investment grade - on which the inclusion of SAGBs in major global bond indices hinges - to junk rating." 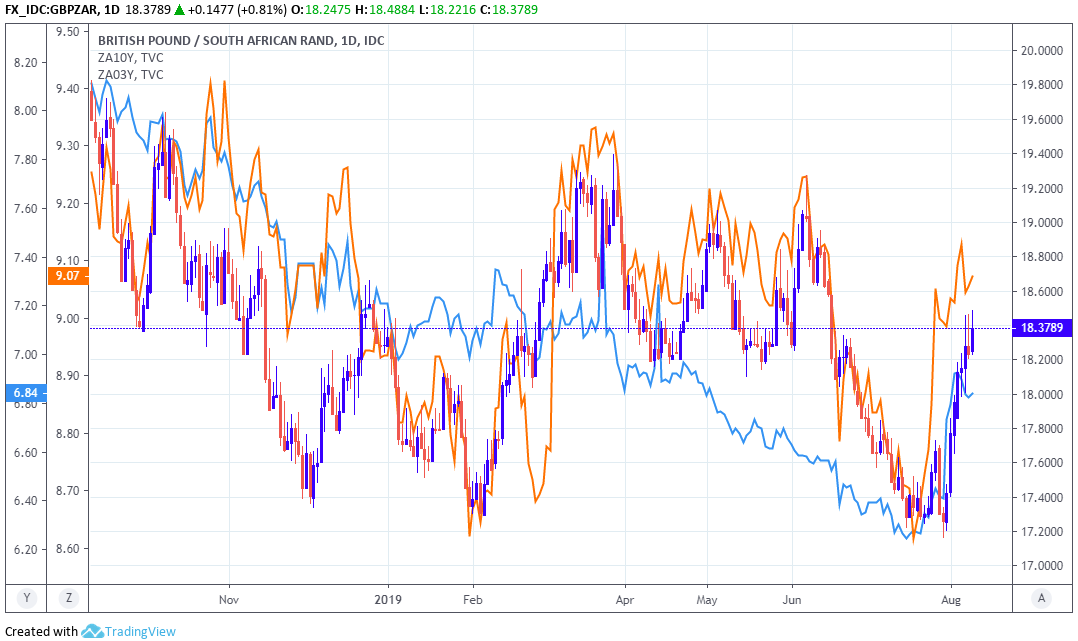 orange and blue lines). Yields spike as bond prices fall amid exodus of investors from market.

Friday's losses came after industrial production was revealed to have slumped in June on Thursday, down 3.2% on an annualised basis, which sets up the economy for a weak second quarter after already having contracted sharply at the beginning of the year. This is aggravating concerns about the outlook for the economy as well as the Moody's rating, which is necessary to avoid a fire sale of South African government debt but is up for review on November 01.

And the trade war between the U.S. and China is escalating, with White House tariffs set to cover all of China's goods exports to the U.S. from September 01 and the negotiations between the world's two largest economies turning ever more unproductive. Every escalation puts South African financial markets under a bit more pressure and brings the economy a step closer to a second recession in two years.

However, concerns over the trade war and domestic economy might not be the only things weighing on the Rand next week because one influential analyst says the charts are arguing for more downside up ahead. Karen Jones, head of technical analysis at Commerzbank, wrote Friday that a daily close above the 15.15 level would mean exactly the aforementioned. The Rand has since comfortably exceeded that threshold. 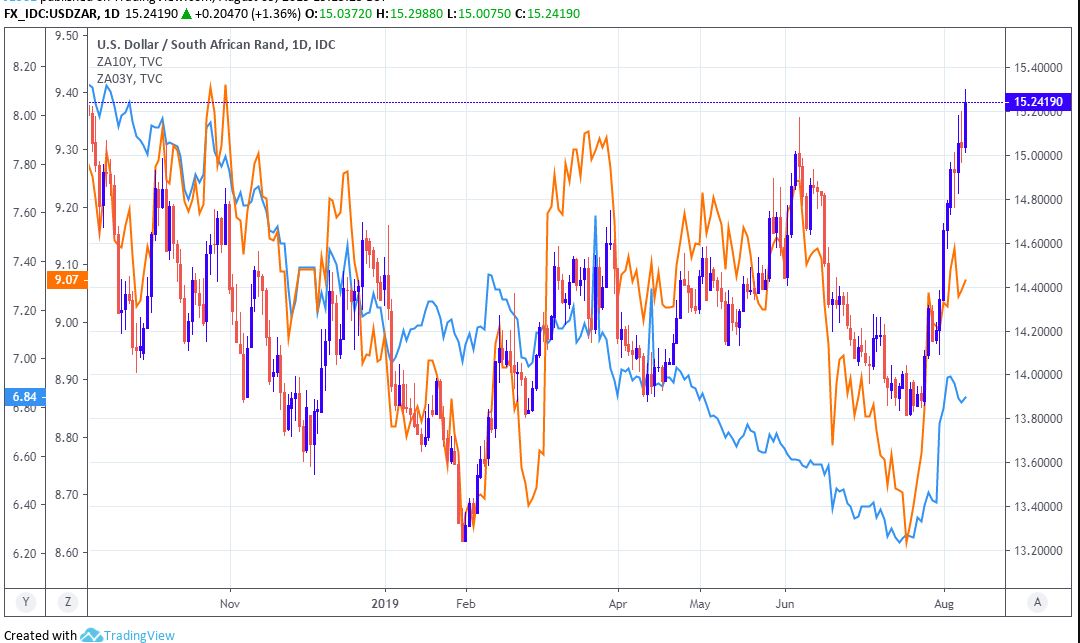 as bond prices fall amid exodus of investors from market.