- GBP/ZAR rises back up inside channel

- Rand to be moved by U.S.-China trade tensions

The Pound-to-Rand exchange rate is trading at around 18.05 at the time of writing, up 0.40% already on the week before, and studies of the charts suggest the pair will probably continue its new uptrend in the week ahead.

The 4-hour chart - used to determine the short-term outlook which includes the coming week or next 5 days - shows how the pair has bounced off a major trendline and risen up forming a new peak and trough progression higher, which is the first sign of a potential reversal. 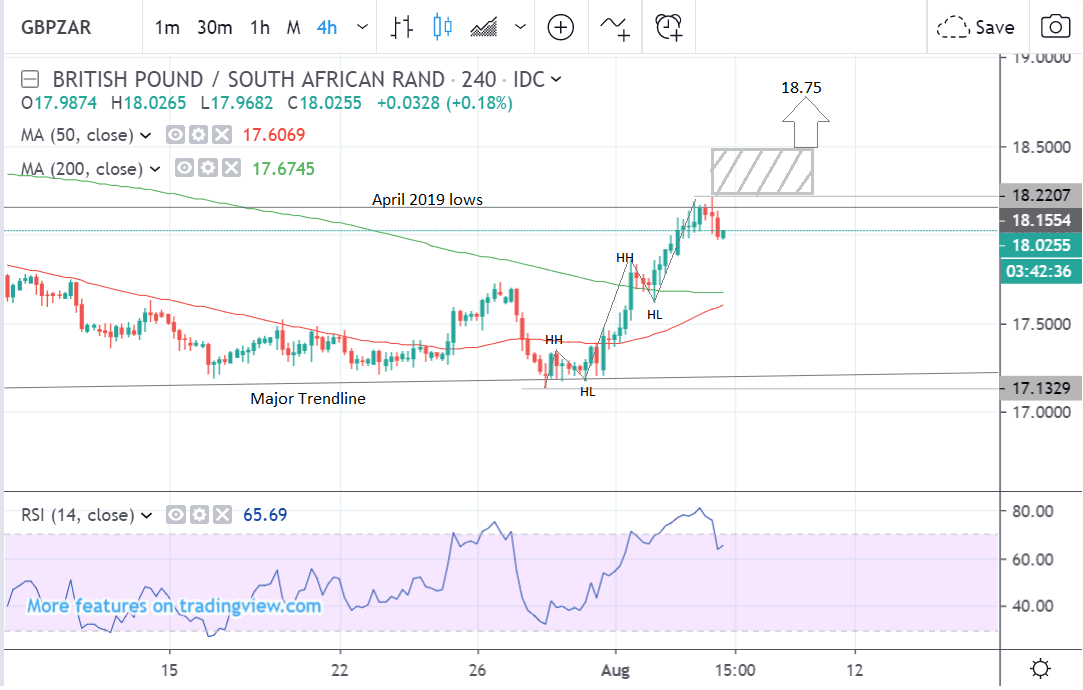 This is reflected by the fact that the pair has now completed two sets of higher highs (HH) and higher lows (HL), which is indicative of the start of a new trend.

The RSI momentum indicator has just excited oversold and there is a possibility this may signal a pull-back, however, it is not enough on its own and the new uptrend will probably resume eventually.

There is a lot of resistance lying just above the 18.22 highs, however, which is likely to impede further upside. The historic lows in the form of the April 2019 lows and major moving averages (MAs) on both the weekly and daily charts are likely to resist prices.

The rectangle with grey hatching on the chart represents this zone of resistance. The top is at 18.50 and if the exchange rate can break above that level we expect a continuation up to a target at 18.75 in the short-term.

The daily chart - used to give us an indication of the outlook for the medium-term, defined as the next week to a month ahead - shows the steep bounce the pair has undergone from the major trendline it found support at in July. 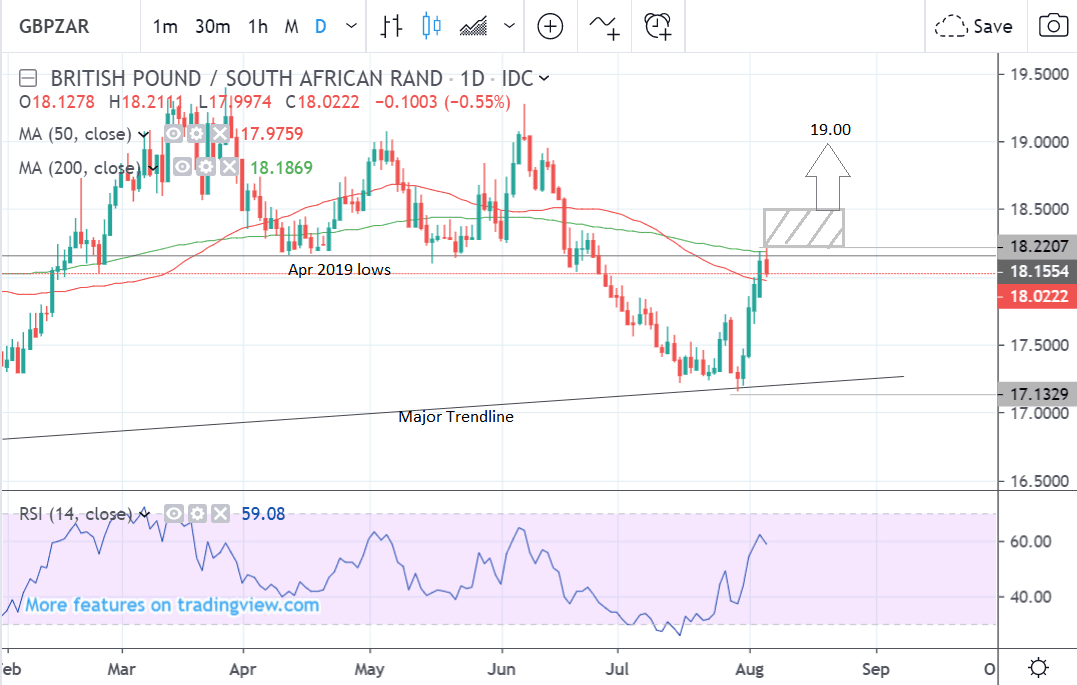 The 200 day MA at 18.22 is presenting a resistance ceiling which could be difficult for the pair to break above. This is because of MAs dual role as both dynamic resistance levels and market equilibrium points.

The forecast in the medium-term is similar to that in the short-term except we see the possibility of a higher target at 19.00 if the pair can successfully make it through the resistance zone represented by the grey rectangle.

The weekly chart - used to give us an indication of the outlook for the long-term, defined as the next few months - shows the bigger picture. 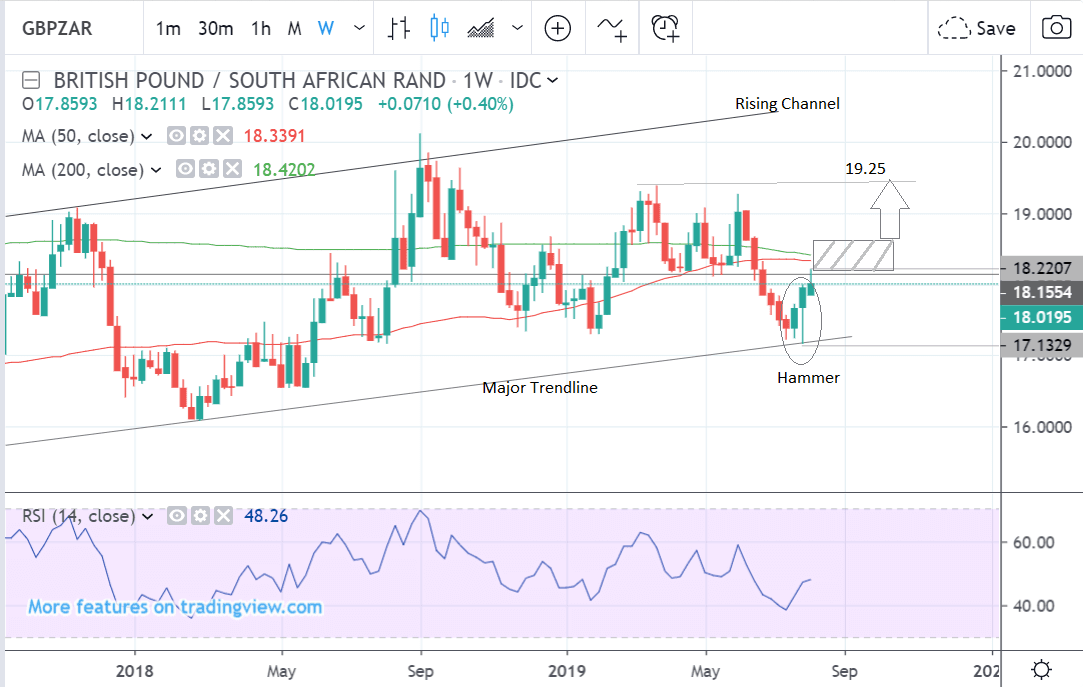 The pair is in a rising channel. It has just bounced off the bottom of that channel and is rising back up. It is likely to continue up to a target nearer the top of the channel.

The 50 and 200 week MAs are shown converging just above the exchange rate in the 1.1830-40s. As already mentioned these are likely to resist prices.

A break clearly above, however, signalled by a break above 18.50 would green-light a continuation higher to a target at 19.25 and the June highs.

The formation of a long, strong, hammer candlestick last week is further evidence a longer-term bullish reversal is probably unfolding.

The main fundamental driver of the SA Rand in the week ahead is likely to be the evolution of the trade war between the U.S. and China and the impact that has on the Chinese Yuan.

The SA Rand and the Yuan are highly correlated, according to analysts at ING Bank, so the Yuan’s deep sell-off on Monday was reflected by a similar sell-off in the Rand. The correlation is due to deep trade ties between the two nations and the fact China is SA’s main export destination.

Further weakness in the Yuan is probable given there is no sign of the trade war easing, however, the impact may be lessened by the fact that reports on Tuesday suggest the Chinese authorities are intervening to support the Yuan.

“China took steps to limit weakness in the yuan, providing some stability to global financial markets in the wake of Monday’s rout. The People’s Bank of China on Tuesday set the daily currency fixing stronger than analysts expected and announced the planned sale of yuan-denominated bonds in Hong Kong,” says Tian Chen, a reporter for Bloomberg News.

On the domestic scene, mining and manufacturing sector data has the biggest chance of impacting the Rand since both are seen as contributors to GDP growth.

Mining output is forecast to show a 0.7% decline in June, on a monthly basis, partly as a payback for the 3.0% climb in May, when it is released on Thursday, August 8, at 10.30 BST, says ABSA bank.

Yet even a decline would not be negative when viewed from a wider perspective.

Manufacturing production, meanwhile, is forecast to show a 0.4% rise in June from -1.5% previously, when it is released at 12.00 on Thursday.

“Stats SA is scheduled to release the mining and manufacturing sector output data for June on Thursday, 8 August and these will be key clues for overall GDP growth in Q2 19,” says ABSA. “Sharp production declines in the two sectors, which came partly due to electricity shortages and strike activity, contributed strongly to the poor GDP print in Q1 19. Positively, production in both sectors appear to have normalised into the second quarter, based on data from April and May.”