- Short-term trend flips but support ahead

The Pound-to-South African Rand exchange rate is trading at 18.42, 1.40% lower on a week-on-week basis and 2.0% lower over the course of the past month.

Aiding ZAR, was the decision by the world’s largest credit rating agency Moody’s to leave South Africa’s credit rating at Baa3, one notch above investment grade.

This eased concerns that Moody’s might downgrade the country’s rating to below investment grade (also known as ‘junk status’), with disastrous consequences for the currency. Junk status would make it much more difficult for SA to attract foreign capital, thus reducing demand for the Rand.

Near-term, momentum therefore looks to reside with the Southern African unit and from a technical perspective, the short-term trend has probably flipped and is now bearish. 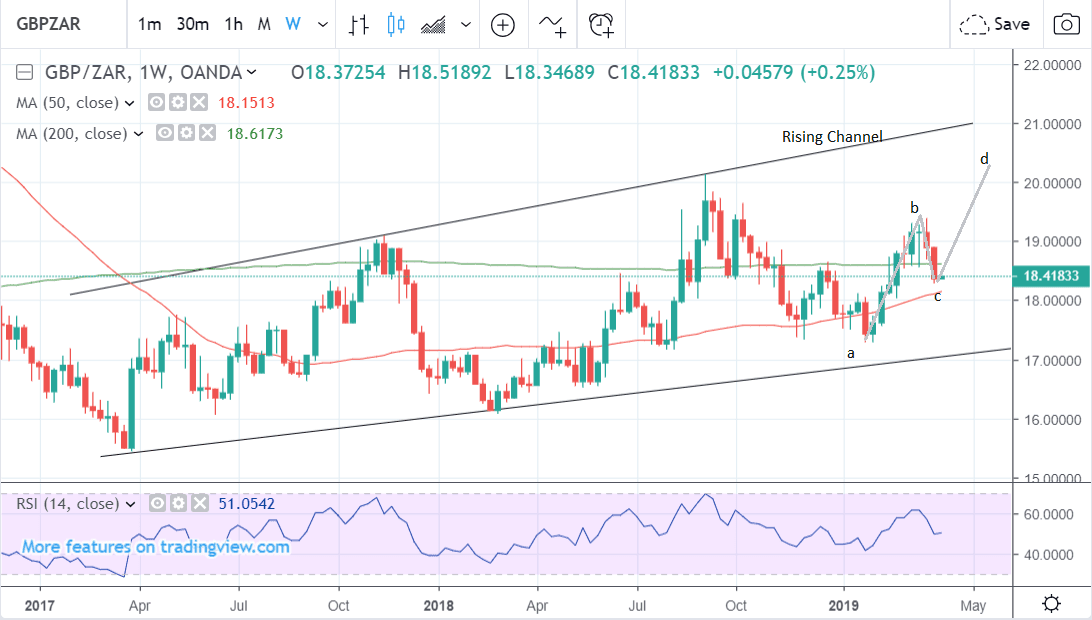 The 4hr time period chart is showing the start of an uninterrupted sequence of bearish peaks and troughs - of lower highs and lower lows (LH and LL) - which is one of the first signs the trend has changed, and given the old adage that ‘the trend is your friend’ a continuation south seems likely. 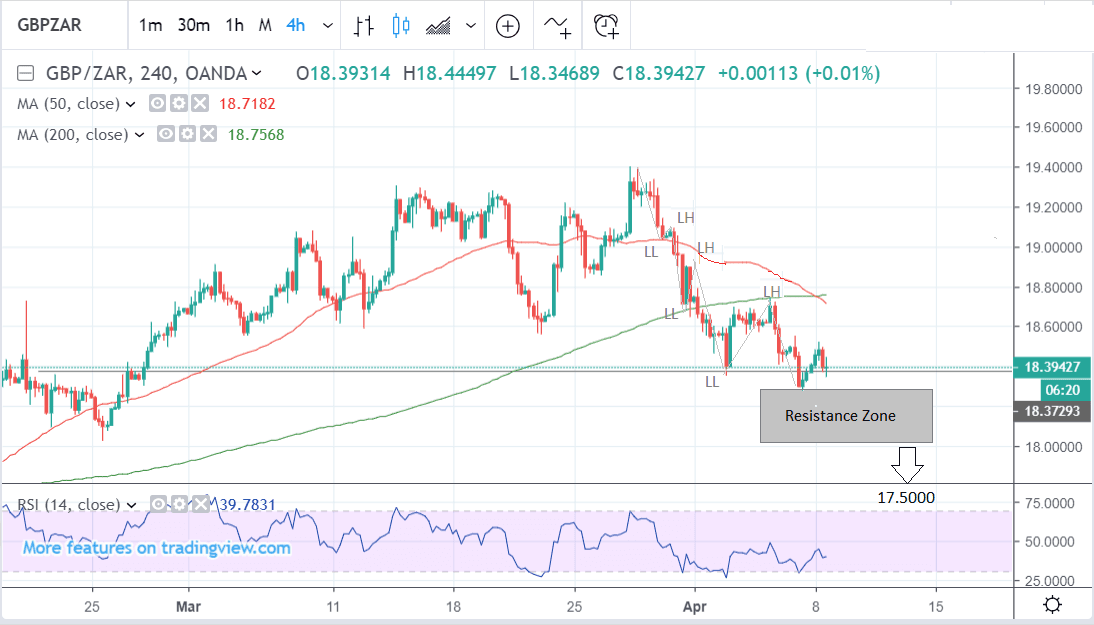 The only problem with an outright bearish forecast, however, is the tough zone of support lying beneath the lows between roughly 18.35 and 18.00, and this is expected to present a major obstacle to bears, and the bearish forecast is conditional on this zone being surpassed. 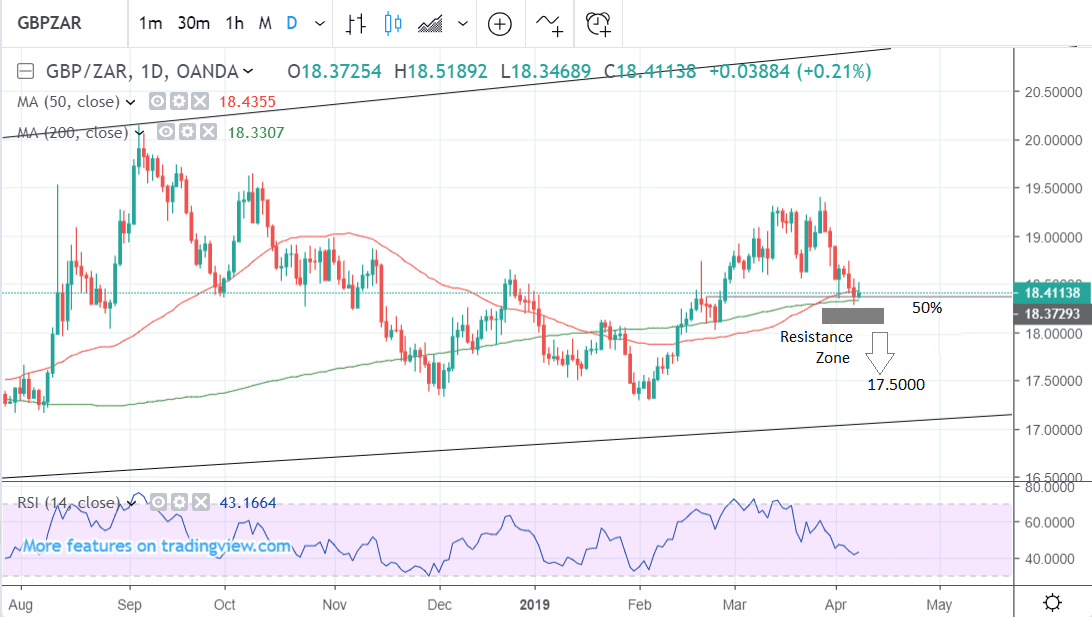 The daily chart above shows substantial resistance at the level of the current lows around 18.35 from the 50 and 200 day moving averages (MA) and the 50% Fibonacci retracement of the previous rally during February and most of March.

The 50% retracement is a key level lying at the midpoint of the prior trend, and is often a place where prices find support and pivot. This suggests a risk of a bullish turnaround at that level, which contradicts the nascent downtrend noted on the 4hr chart. This is the reason why we attach a condition to more downside, that it needs to clearly break below the support zone, with a break below 18.00 providing that confirmation, down to a target at 17.50.

Scoping out even further to the weekly timeframe, and the outlook is actually much more bullish, as we see the pair rising in a large ascending channel. The recent pull-back over the last two weeks also looks more modest on the weekly chart.

The structure of the market suggests more upside: the pair may be forming a three-wave ABCD pattern, also known as a Gartley pattern, which would indicate the next move could be the unfolding of a final C-D move higher.

The main data releases for the Rand in the week ahead are the SACCI (South African Chamber of Commerce and Industry) confidence index, manufacturing, mining and gold production.

The SACCI index, which measures confidence, has declined and is expected to continue to fall given SA’s economic headwinds. The national power utility Eskom remains financially vulnerable and there is a political risk on the horizon as the country faces elections on May 8. The SACCI is scheduled for release at 10.30 on Wednesday.

Confidence will probably eventually rebound after the elections, according to Shireen Darmalingam, an economist at Standard Bank, as they are expected to return a more reform-oriented government. This suggests a year of two halves.

“We see the rand rebounding in H2, premised on reforms after the elections. It’s still relatively weak, according to our valuation models; and, pre-election uncertainty and further load-shedding, alongside global headwinds and risks, will keep the rand vulnerable in H1,” says Darmalingam.

Other SA data includes mining, manufacturing and gold production out on Thursday at 10.30 - and at a later 12.00 for Manufacturing.

Gold and mining are volatile time series so are unlikely to cause a big change to the Rand after only one release.

Manufacturing, on the other hand, has seen a very steep fall recently after declining by 2.0% in January. Economists expect a further -1.4% fall in February data. The sector looks vulnerable.

The Rand is often affected by the strength of the Dollar, and the two currencies are negatively correlated.

The latest U.S. inflation data, therefore, on Wednesday, could also impact on the Rand.

Higher than forecast inflation in the U.S. might strengthen the Dollar by suggesting the possibility of higher interest rates, however, by the same token it could weaken the Rand due to the high proportion of SA businesses with Dollar-denominated or U.S. originated debt, for whom a stronger Dollar and higher interest rates increases their debt repayment burden.