The Wall Street-based investment bank say a combination of domestic and global factors are currently aligning in the currency's favour, however next month's budget presentation looms as a primary risk that must be watched by investors.

The Rand certainly has some wind in its sails, if we look at the currency's performance over the past month we can see it is topping the leaderboard: 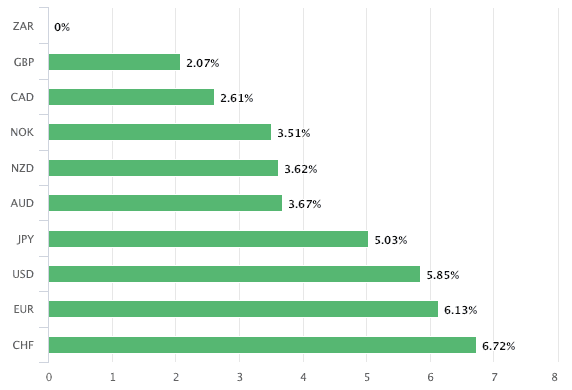 "ZAR has been the best-performing EM currency over the past month and week, supported by tailwinds common to the high-yielding complex (a dovish Fed, resilient growth and moderate inflation), as well as some positive Rand-specific news," says strategist Zach Pandl at Goldman Sachs in New York.

Domestically, concerns about Eskom, the heavily indebted state-owned electricity company, have been weighing on South African assets, "so comments from government officials this week about a plan to stabilise Eskom have been welcomed by rates and also FX markets," says Pandl.

Goldman Sachs remain constructive on the currency on the expectation the negative output gap and a reform-oriented government will keep the growth/inflation mix favourable.

But, "volatility is never far, so after the past month’s strong performance, next month’s budget is an important risk factor, as are the May general elections," says Pandl.

Looking at the Goldman Sachs forecasts for GBP/USD, we can determine their cross rate forecasts for the Pound vs. Rand. The pair is forecast at 9.73 after three months, 19.35 after 6 months and 19.04 after 12 months.