"While the current pace of selling is obviously unsustainable, it’s also not impossible for them to keep reappearing over and over like they did in 2003," - Spectra Markets

Japanese Yen trading volumes have surged and remained high since the government of Japan and Bank of Japan (BoJ) were reported to have intervened directly in order to rescue the Yen from a one-way market that had pushed the currency to its lowest against the Dollar since 1990.

Turnover in the main Japanese exchange rate USD/JPY remained unusually high on Monday and Tuesday this week, according to data sourced from two of the largest interbank currency trading platforms.

USD/JPY turnover on the Electronic Broking System (EBS) and Russell Group platforms came in around $20BN on Monday and Tuesday after surging to $67BN last Friday, when the Yen rallied sharply against all currencies amid reports of intervention by the government and BoJ.

"Japan's FX reserves are still more than $1 trillion. Yes, they have used a chunk, let’s say $60B. But the situation is not dire," said Brent Donnelly, CEO at Spectra Markets and a veteran currency trader with time spent at hedge funds and global banks including Lehman Brothers and HSBC.

"They bought soooo much USDJPY at good levels in 2003 and more at better levels in 2010/2011. While the current pace of selling is obviously unsustainable, it’s also not impossible for them to keep reappearing over and over like they did in 2003," Donnelly wrote in a Monday market commentary. 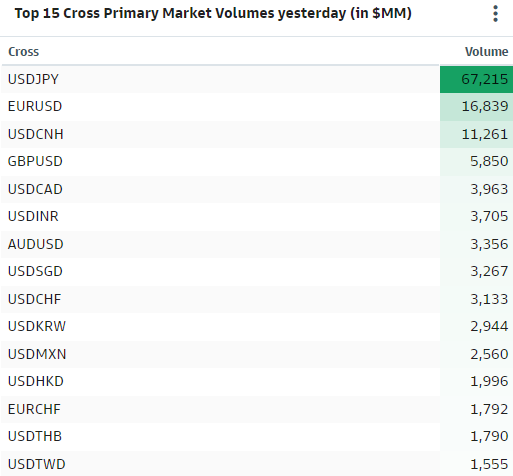 The above rank order of Monday's volumes covers FX spot transactions only and so does not include derivatives such as FX forwards and FX swaps, where trading volumes can be equally as significant, if not more significant at times.

While trading volume can vary from day to day, it had ranged between roughly $6BN and $11BN per day for USD/JPY on the above referenced platforms previously prior to last Friday's suspected intervention so the data does suggest a significant pickup in trading activity over the past week.

Last Friday's was the second suspected intervention in the last month with the previous coming hard on the heels of a September Federal Reserve (Fed) policy decision that saw the bank unveil updated forecasts warning that it could raise U.S. interest rates to 4.5% by year-end and 4.75% early next year.

"The BoJ's steadfastly dovish policy stance stands in stark contrast to inflation-fighting central banks like the US Fed. With USDJPY rising past the psychologicallyimportant threshold of 150 and Japan's Ministry of Finance (MoF) actively intervening in FX markets, we are being asked whether concerns over excess yen weakness could prompt a "hawkish pivot" from the BoJ, perhaps under pressure from the government," says Shusuke Yamada, an FX and rates strategist at BofA Global Research. 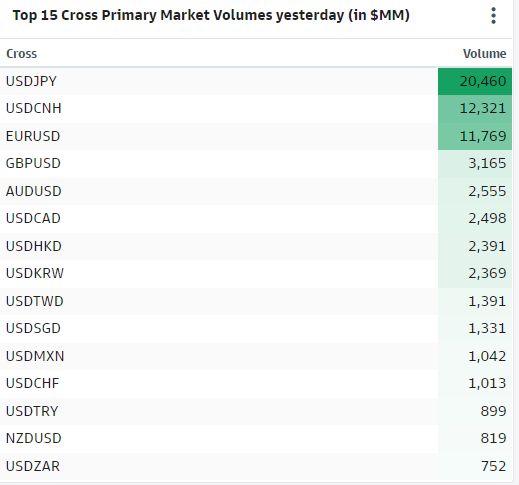 "We maintain that, with pressure on yields and volatility high, now would be a particularly bad time for the BoJ to surprise investors with a "hawkish pivot" as it would exacerbate the risk-off sentiment in markets. The potential market turmoil would risk hurting, not helping, the Kishida government's approval ratings-anotherreason why we do not believe the government would pressure the BoJ to pivot in the very near term," Yamada said on Tuesday.

The Dollar fell widely last Friday and has remained under pressure this week including on Wednesday when a Reuters report suggested the Peoples' Bank of China (PBoC) had become the latest to intervene in support of its currency after the offshore Renminbi fell to a record low on Tuesday.

The Renminbi rose more than one percent against the Dollar to become the best performing G20 currency on Wednesday in price action that also potentially explains continued widespread declines in U.S. exchange rates

Dollar demand has also been dampened of late by potentially misplaced speculation about a forthcoming change in Fed policy after The Wall Street Journal reported last Friday that the bank could raise its interest rate by 0.75% for a fourth time running next week and then by a lesser 0.5% in December.

This would leave the top end of the Fed Funds rate range at 4.5% for year-end and this kind of outcome would be merely in line with September's forecasts. 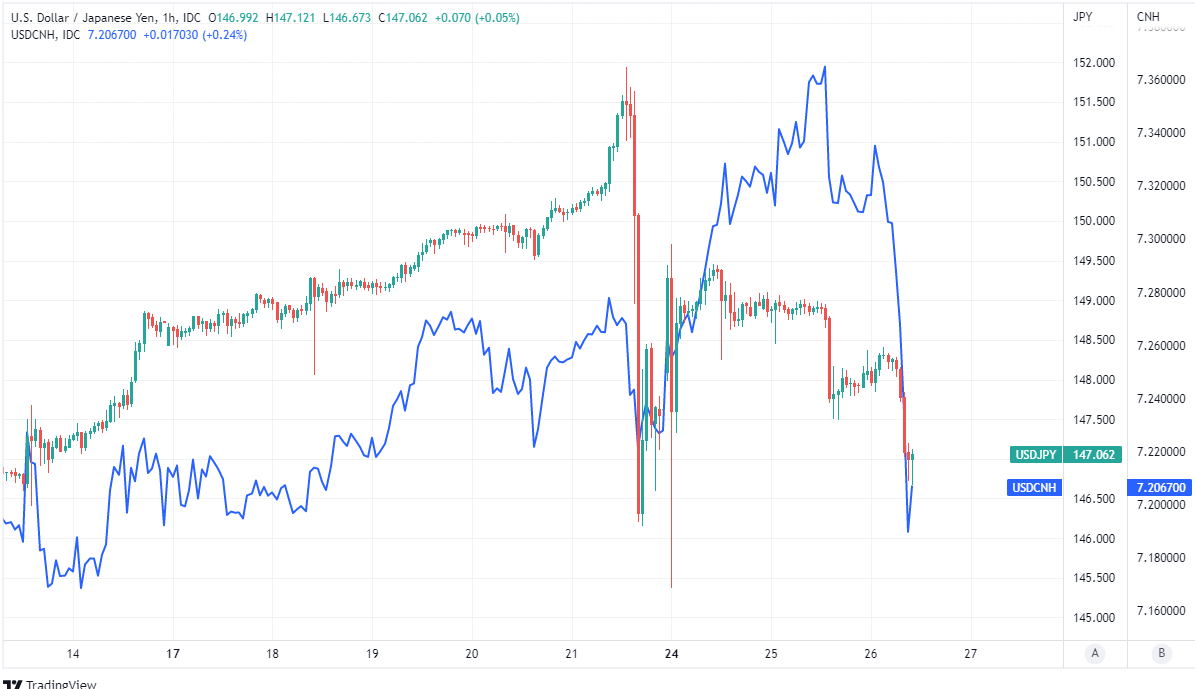 Above: USD/JPY shown at daily intervals alongside GBP/JPY and Dollar-Renminbi rate. Click image for closer inspection.