- Dominant downtrend back in driving seat

The Pound-to-Yen exchange rate is trading at around 127.60 at the time of writing, 1.23% lower than a week ago amidst an ongoing broad-based sell-off in the British currency.

Concerning the outlook, our latest technical studies of the charts suggest the pair has resumed its previously dominant downtrend and although it has reached key lows there is a risk of even deeper downside penetration.

The 4 hour chart - used to determine the short-term outlook, which includes the coming week or next 5 days - shows the pair having rolled over at the August 22 highs and probably now resuming its downtrend. 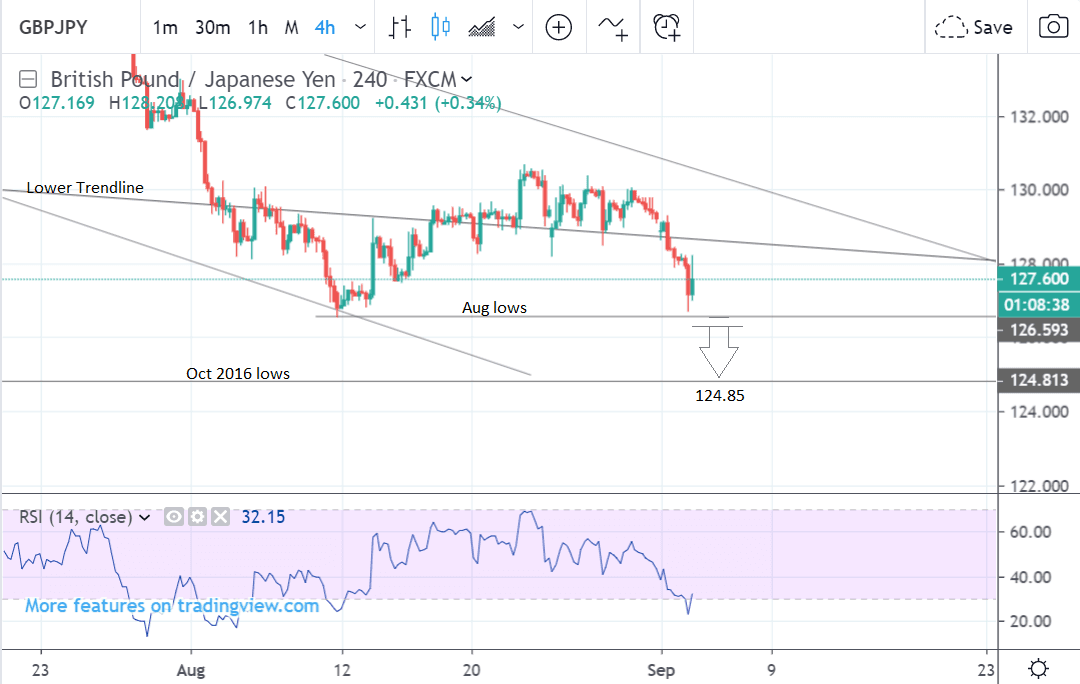 A break below the August lows confirmed by a move below 126.40 would provide confirmation of a continuation lower to a target at 124.85 and the October 2016 lows.

The daily chart shows the pair declining in a steep bearish channel. A break below the August lows, as mentioned above, would probably lead to a continuation down to the October 2016 lows. At that level is there is a chance of a bounce as historical lows often provide a hard floor of support. 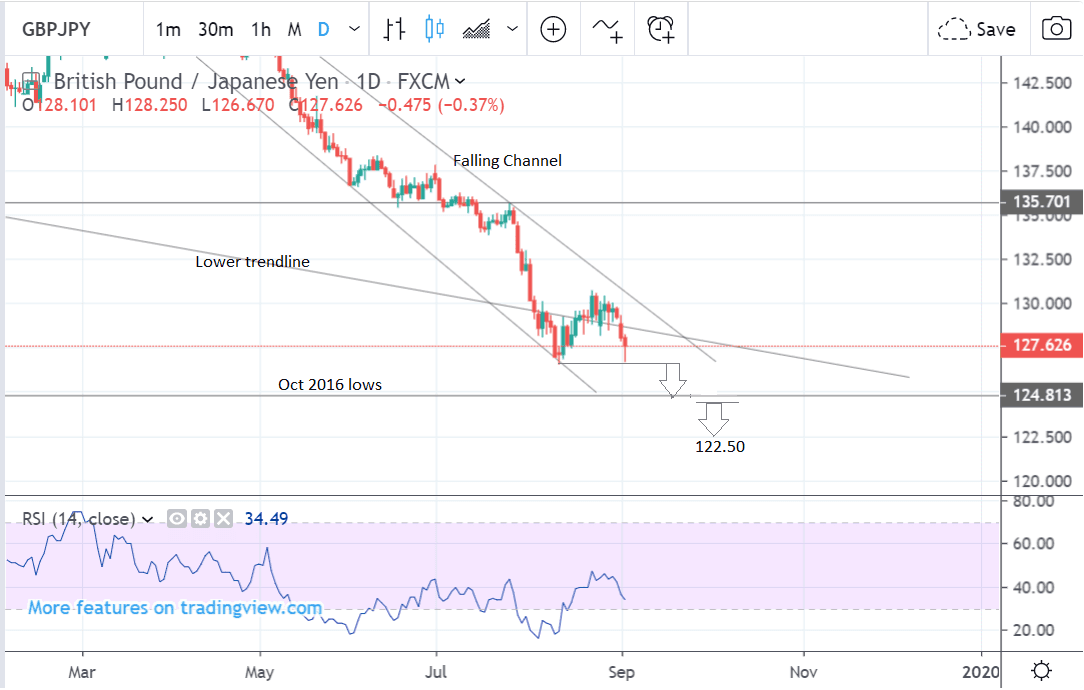 The weekly chart shows the pair is trading at the bottom of what may be a large falling wedge pattern. 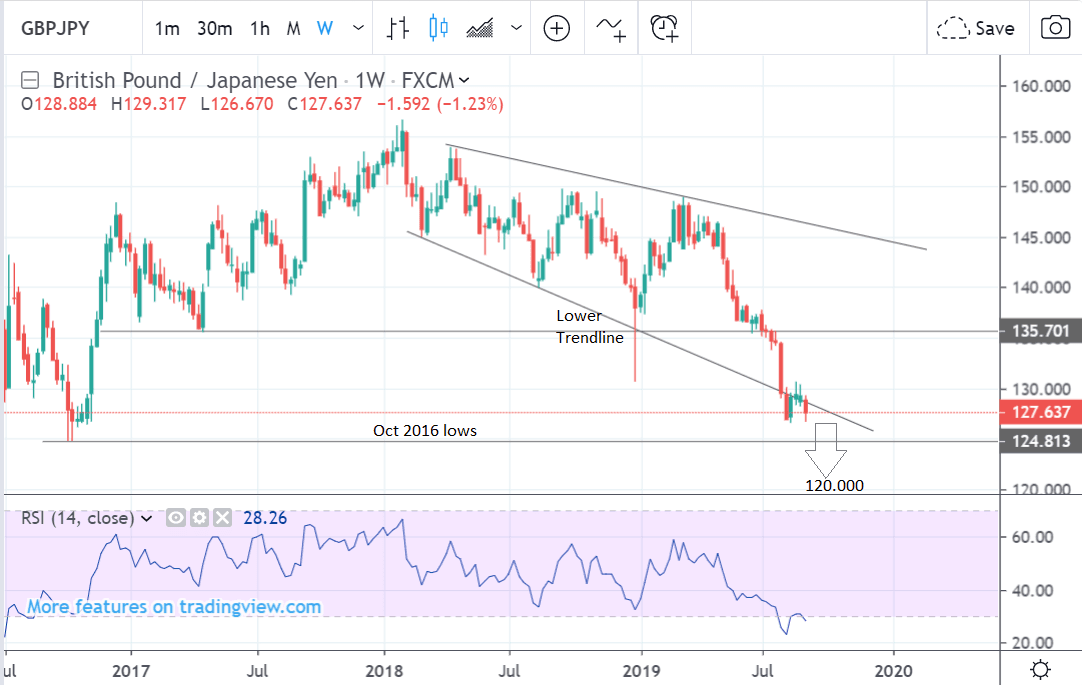 Whilst wedge patterns are normally considered bullish and would suggest a recovery over the long-term, the price is failing to corroborate a bullish forecast after falling back below the lower trendline of the wedge.

Over the long-term, the chart suggests the potential for a recovery but given the bearish bias on the short-term timeframes there is also a risk of more downside, and a continuation lower to a target at 120.000.

The main drivers of the Yen are likely to be global risk trends, seasonal factors, the fluctuations of the U.S. Dollar, and the risk of intervention by the Japanese authorities.

Global risk sentiment is subdued on Tuesday with a common barometer of risk appetite, the S&P 500 stock index, trading 18 points lower just before the open, in the futures market, and gold, another significant measure of risk aversion, up $14 an ounce.

A worsening in the relationship between the U.S. and China appears to be one of the reasons for the decline in sentiment after reports neither side can agree on a date for trade talks, scheduled in September. China has also issued a complaint against the U.S. to the World Trade Organisation (WTO) about the U.S.’ increased tariffs.

If trade tensions continue to ratchet up the Yen is likely to see inflows since it trades like a safe-haven currency which appreciates when risk aversion increases and markets are in turmoil.

Brexit is another factor which could impact on the Yen. A ‘no deal’ outcome is still possible despite MP’s trying to legislate against it. If they fail and it becomes more likely the UK will leave on October 31 the Japanese currency will almost certainly see gains.

At the moment, however, it looks possible parliament may be successful in blocking a ‘no-deal’ and if so risk aversion and the Yen are likely to ease.

Seasonality suggests the Yen may weaken in September as traditionally risk aversion tends to peak in late August and rolls over into September.

A stronger U.S. Dollar would tend to be negative for the Yen and the U.S. is currently trading at new yearly highs above 99.00 in the Dollar Index. If the U.S. unit can maintain its gains it is likely to weigh on the Yen.

As the Yen continues its relentless climb due to the worsening global backdrop the prospect of direct intervention by the Japanese authorities to weaken the currency becomes increasingly likely.

In March 2018 when the Yen was at 105.00 (USD/JPY) the Bank of Japan (BOJ) warned the strong Yen might impact negatively on corporate profits due to making exports increasingly uncompetitive. This led to fears of intervention. The same is possible now given the similarly strong Yen, although the authorities may fear they will be branded currency manipulators by the U.S. authorities if they do intervene.