GBP/JPY is currently trading in the 144.70s, after falling over half a percent this week so far already.

From a technical perspective, the forecast is neutral as the pair continues its sideways, range-bound, box consolidation from late February. 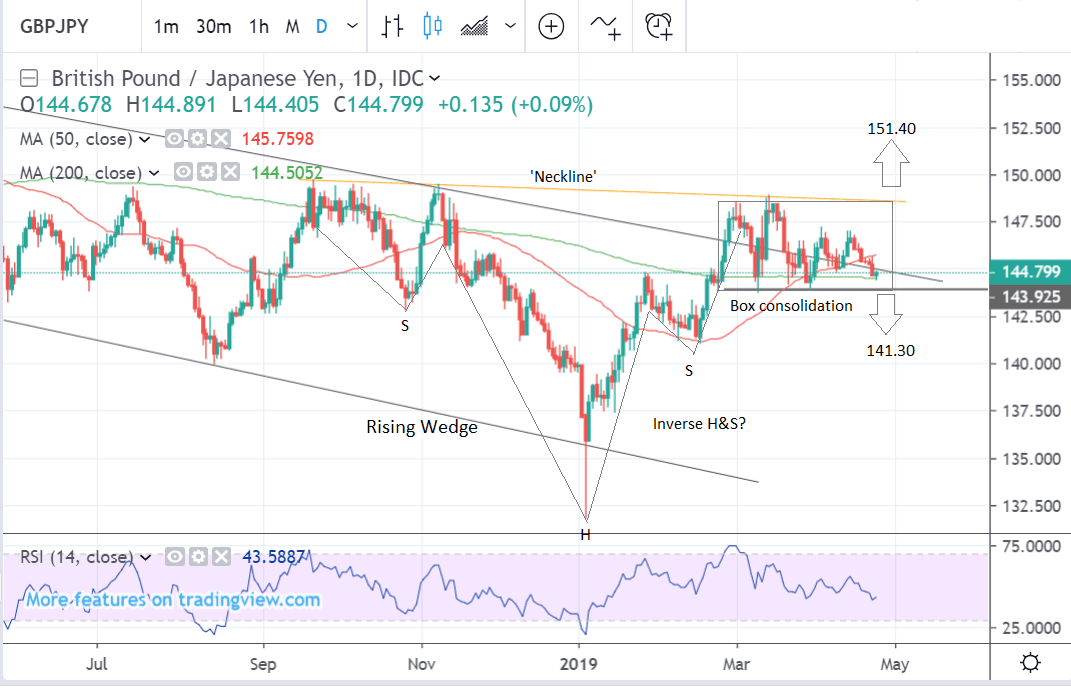 Only a clear break above or below the parameters of the range would change this neutral outlook to a more directional forecast.

We believe break above 149.00 would lead to a continuation higher to a target at 151.40 and the start of a bullish short-term trend. 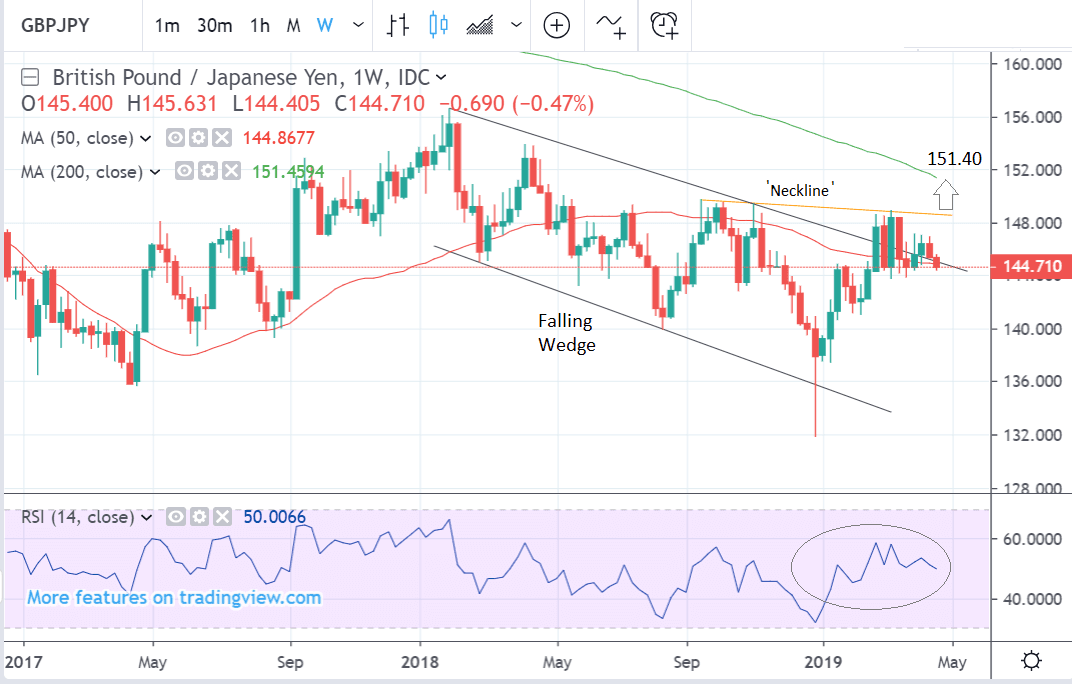 GBP/JPY has been descending within the confines of a bullish wedge pattern since the beginning of 2018 and this provides a more constructive backdrop, favouring an eventual breakout higher.

Upside breakouts from wedges are usually quite bullish and can result in strong rallies higher.

The RSI momentum indicator in the lower pane is also quite strong: it is now higher than it was back in September despite the exchange rate being lower, and this can be a sign of ‘pent-up’ upside.

There appears to be an important support and resistance line, or neckline in the 148s which is preventing more upside from developing, but this could very well give way in time.

It is often the case that levels which are repeatedly touched on charts eventually give way and this could be the case with the 148 level on GBP/JPY.

The inverse head and shoulder pattern which seems to have formed on the daily chart also suggests a constructive backdrop. Theses are bottoming patterns. A break above the neckline at the 148 resistance level would lead to further upside gains to a possible eventual target in the later 150s perhaps, based on an extrapolation of the height of the pattern higher.

The Japanese Yen: Bank of Japan Decision Ahead

The Yen could take direction from the Bank of Japan (BoJ) interest rate decision on Thursday, April 25, due out at 03.00 BST.

The release of the BoJ’s quarterly outlook report is at the same time.

If the BoJ is hawkish about the inflationary outlook and sees inflation rising and the economy strengthening it raises interest rates, which is positive for the Yen.

The latest sets of inflation figures showed core inflation tick up to 0.8%, however, this is far from the BoJ’s 2.0% target.

“The policy board will likely maintain its positive assessment of Japan's underlying economic strength while continuing to be cautious of the recent weakness in economic data," say Société Générale in a preview of the event.

Forex broker XM.com are however less bullish and see the BoJ stuck between a ‘rock and a hard place’ for whilst the global slowdown raises the value of the Yen and stifles exports, the BoJ cannot ease policy much further than it already has given it has one of the easiest policies in the world after decades of deflation.

If it were to increase asset purchases or cut rates any lower it might be at risk of generating potential financial stability risks.

“As the global economic slowdown continues to drag on Japanese exporters, policymakers are in a bind as after years of easy monetary policy, inflation is far below the BoJ’s 2% target and growth remains sluggish. The Bank is expected to keep policy unchanged in April with limited reaction anticipated in the Yen,” says Raffi Boyadijian an analyst at XM.com.