The Pound-to-Dollar exchange rate is in a short-term uptrend which has reached an important resistance level at the 50-week moving average (MA) and this is capping further gains, and bringing into question the sustainability of the uptrend. 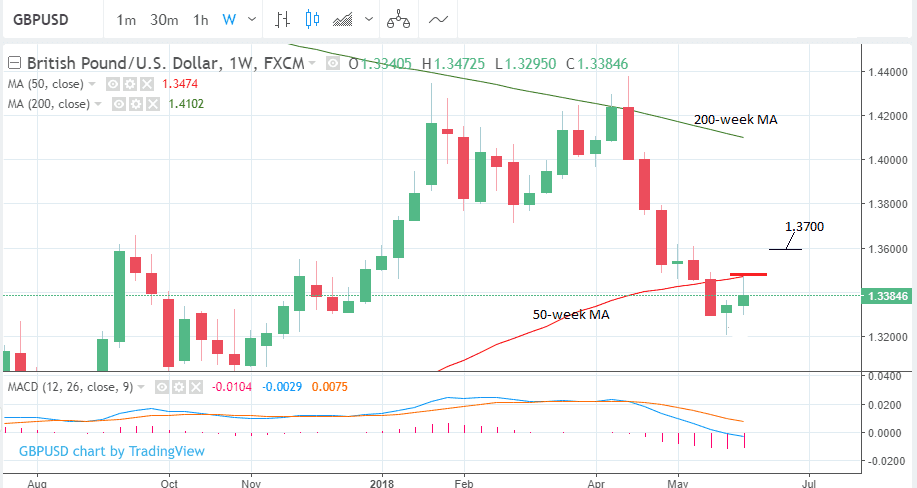 Large moving averages often present an obstacle to the trend, and when prices meet them they often stall, pull-back or even reverse.

Major MA's, such as the 50,100 or 200 period MAs are popular indicators which attract a lot of attention and are, therefore, often the location of increased buying and selling; short-term traders often use them to trade counter the dominant trend, confusing the trend.

The pair is in a short-term uptrend so if it were not for the obstruction from the 50-week MA we would probably expect the short-term trend to simply extend, however, given the position of the MA we are now more doubtful and would require a clear break above it for confirmation such as from a move above 1.3600, targeting 1.3700.
The 4-hour chart below shows the short-term trend.

It also shows that the pair has pulled-back in what currently looks like an ABC three-wave correction, which could mean it is about to start going up again.

However, there is also a possibility, given where the 50-week MA is that the pair may be subject to further weakness. 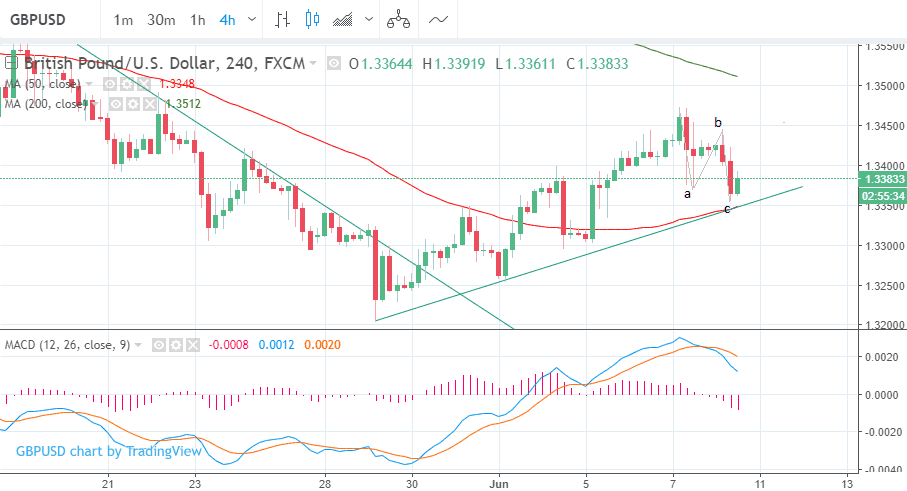 In the absence of more bearish evidence, however, we remain bullish, if very cautiously so.

The monthly chart is further reason to be only cautiously bullish given its bearish tenor.

The last two months have shown a sharp and decisive pivot down since the establishment of 1.4377 highs in April. 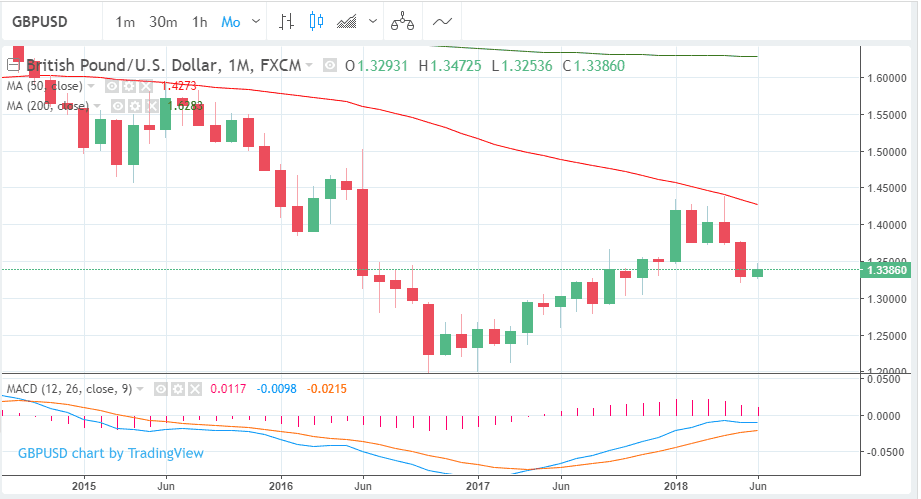 It's a busy week on the data front for the Pound.

Manufacturing production numbers are out, and markets are looking for the month-on-month reading for April to read at 0.3%, taking the year-on-year number up to 2.9%.

Any disappointment might hurt Sterling as markets are looking for economic data to start reflecting a pick-up in activity into the second half of the year, which could ultimately lead to an interest rate rise at the Bank of England in August.

Should expectations for an interest rate rise is August increase over coming weeks, on the back of improving data, the Pound should ultimately find more support.

This is the big one for Sterling.

The ONS will release employment and wage data at 09:30 which will in turn be closely watched by policy-setters at the Bank of England.

For Sterling, a beat on this 2.6% figure must be delivered if it is to go higher.

"However, recent outturns of pay growth – as captured by the 3M/3M growth rate – suggest the underlying trend in pay growth has fallen back recently," warns a preview note of the event released by economists at UniCredit Bank. 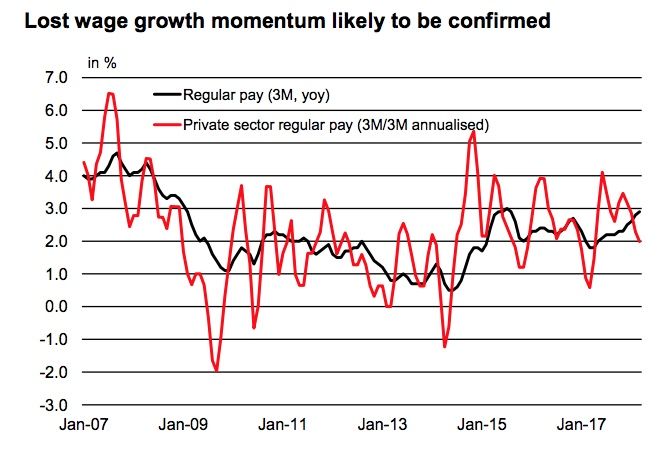 Another big day for Sterling as actual inflation numbers are released and the same dynamics as described above apply.

Headline inflation is forecast to read at 2.5% on an annualised basis, up from 2.4% in the previous month.

Clearly inflation is heading in the wrong direction for the Bank of England which is targeting a 2.0% inflation rate, and should the number beat 2.5% expectations for an interest rate rise will surely be ushered forward.

Be careful to watch the core CPI number - this is arguably more important than the headline number as it accounts for organically generated price rises that reflect economic growth dynamics.

Core is forecast to read at 2.1% a hit or miss against this number will likely move Sterling.

Retail sales numbers are out, and with markets focussing on data once more, Sterling could react to any surprises.

Expectations are for UK consumers to be finding their feet again following a tough start to the year.

Retail sales are forecast to read at 0.6%.

The US Dollar this Week: All About the Fed

The Dollar's moves are currently more a function of overall risk sentiment on global markets, which are in turn largely being fed by the United States president Donald Trump.

The Dollar tends to benefit when stock markets are selling off, owing to the safe-haven features of the gargantuan pool of US Dollar liquidity that exists across the world. When traders are running scared, they liquidate and buy Dollars.

Watch what Trump says at the G7 summit this weekend - will he double-down the route of tearing up global trade treaties while imposing further tariffs? If yes, expect sentiment to struggle next week.

But, there is the US Federal Reserve to keep an eye on mid-week where another interest rate rise is expected.

A rate rise is already expected, and therefore what matters for the Dollar are the future moves on interest rates that will likely be signalled by policy-setters.

"Ahead of the quarterly rate hike that the Fed will deliver next Wednesday, the big if is whether the dot plot will signal three or four hikes in total for 2018," says Andreas Steno Larsen, an analyst with Nordea Markets. "In the March projections only one FOMC member was needed to tip the balance from three to four in the plot. We judge that there is a relatively large probability that the balance is tipped in favour of four hikes in total in June."

This would help the Dollar catch a bid we believe.

"Given the current market pricing of Fed Funds futures the June hike is more or less a completely done deal, while four hikes in total for 2018 is far from priced in. In total just around five hikes for 2018 and 2019 combined are priced, which is why a tipped balance in the dot plot will likely spur a yield-positive repricing of the Fed Funds futures and likely also a moderately USD positive move in the FX space," says Larsen.

Analyst Katherin Goretzki with UniCredit Bank says, "this past week, the recent scratches in USD strength have deepened. A hike by the Fed next week is unlikely to provide support on its own as it is fully priced in, but a more-hawkish tone could help the greenback."