The trend currently favours both the Euro and British Pound against the U.S. Dollar whose multi-year period of appreciation appears to finally be over.

Pound Sterling faded against the Euro but rose against the US Dollar to fresh multi-year highs on Monday, January 15 in a broad continuation of currency market action seen at the close of the previous week.

Dollar weakness is seen as the key driver of FX trade on Monday, January 15 but the Pound is broadly supported on renewed hopes of a 'soft Brexit' following reports that Spanish and Dutch finance ministers have agreed to push for a 'soft Brexit'.

The Dollar suffered substantial declines across the board, but frustratingly there was no clear driver behind the move.

"The economic calendar is light and US stock markets will be closed in observance of Martin Luther King Day. This hasn’t stopped the Dow futures from melting up another 140 points. It goes to show that in low-volume days like today, it is even harder to resist against a strong trend," says Fawad Razaqzada at Forex.com.

"There was no fundamental news for the move as the rally was pure momentum driven with stops triggering vicious short covering spikes in morning London dealing. After Friday's dollar breakdown that saw both EURUSD and GBPUSD post multi-month highs, today's move was simply the continuation of those flows."

Why is the Dollar Falling?

"Now you might be wondering what I am on about: after all, if inflation is rising, you would expect the Fed to respond by raising interest rates, and that surely would be Dollar-positive," opines Razaqzada.

"Yes, that’s true, but the fact is the Fed won’t be the only central bank that would need to raise interest rates if global inflation is rising. In fact, central banks who haven’t yet tightened their belts, like the ECB, might have to do so more aggressively than the Fed, for there’s a greater risk of overcooking inflation in regions where interest rates are still at, below or near zero," adds the analyst.

Therefore, the Dollar may be falling only because of expectations that the Federal Reserve will tighten its monetary policy at a slower pace relative to some other major central banks.

"USD sentiment has soured generally as investors consider strengthening growth and improving prospects for policy accommodation to be reversed in Europe, and elsewhere," says Shaun Osborne, an analyst with Scotiabank in Toronto.

The Federal Reserve’s recent hikes had also been well priced by markets by the time they occurred. So it could be that the Fed’s next couple of rate hikes are also mostly priced in and it will take a shift in communication from the Fed to materially alter the Dollar's trajectory.

"The USD has under-performed even relative to our bearish expectations over the turn of the year but we see little reason to expect a rebound any time soon," says Scotiabank's Osborne.

Furthermore, the Euro and the Pound are seen as being supported by a favourable political backdrop in Europe.

Angela Merkel is moving nearer a grand coalition in Germany, while expectations of a hard Brexit have diminished considerably in recent weeks.

"So, sentiment towards the likes of the GBP/USD and EUR/USD is turning positive by the day and this is pressuring the Dollar," says Razaqzada.

Where will the Pound-to-Dollar Exchange Rate go Next?

Concerning the outlook, Forex.com believe the Pound remains constructive against the Greenback, although it is approaching some key hurdles. 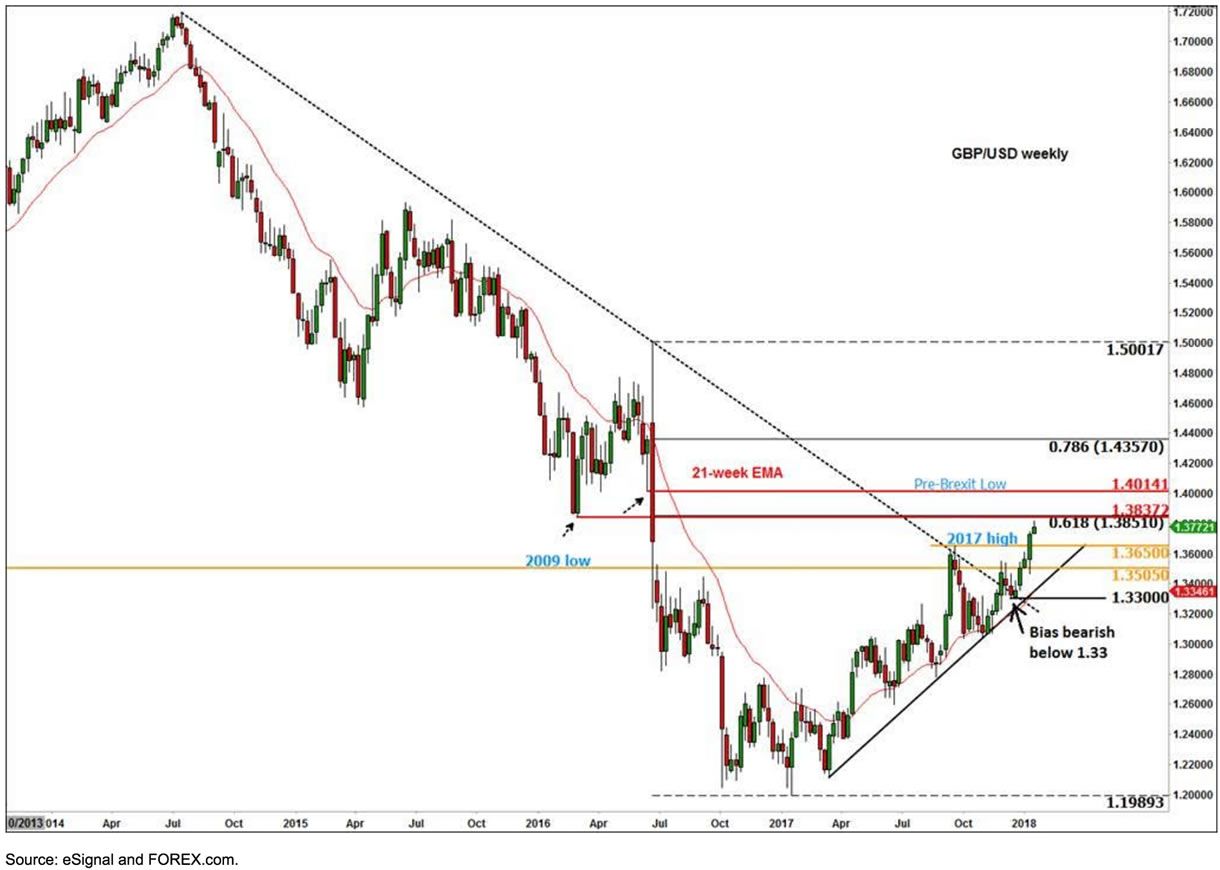 As can be seen from the weekly chart, above, GBP/USD managed to break above its long-term bearish trend line in November, which Razaqzada says basically ended any remaining bearish hopes.

In December, the re-test of the now broken trend line offered support, confirming the buyers are in control. The GBP/USD subsequently moved decisively above the key 1.3505 level, which was the 2009 low.

"Thus, going forward 1.3650 and 1.3505 are the key levels that the bulls will need to defend. If they fail to do so and price subsequently breaks the last low prior to the latest rally at 1.3300 then this would mark the end of the uptrend. But for now the uptrend remains intact and as such we could see further gains before price potentially turns," says Razaqzada.

They next key level of resistance to watch comes in at 1.3835/50 area says the Forex.com analyst.

As well an old support, this is where the 61.8% Fibonacci retracement level also comes into play. Beyond this, 1.4000/15 is the next bullish objective.

"This psychologically-important hurdle was the last low hit just before Brexit. Once support, this could potentially turn into a long-term resistance level," adds Razaqzada.