The pound to dollar exchange rate (GBPUSD) has been sold heavily as we approach the end of the first week of March.

“Whilst the US markets struggled, the dollar continued to surge, rolling over the pound, euro and yen like a tank in a field of flowers.” – Connor Campbell at Spreadex.

The reason for the dollar buying is clear – the US economy is ready to take an interest rate rise – the US Federal Reserve no longer has the luxury of waiting due to ambiguous economic data.

Find out why interest rate rises are supportive of currencies with our handy infographic.

As we head into the weekend we see the sterling to dollar exchange rate trading a full percentage point lower on a day-to-day comparison. 1 GBP = 1.5042 USD.

The currency pair saw a high of 1.5421 showing just how steep the falls have been for those hoping for a stronger sterling.

The declines come in addition to the strong declines the British pound has already had to contend with this week.

"It was a funny ol’ day on the markets, with impressive US non-farm data being greeted by a shrug from the American indices. Yet again this strong non-farm figure causes the hawks to bang the June interest rate hike drum once more,” says Connor Campbell at spread betting provider Spreadex.

“Whilst the US markets struggled, the dollar continued to surge, rolling over the pound, euro and yen like a tank in a field of flowers.”

We are forecasting the GBP to continue finding itself under pressure until the congestion zone at 1.50 is reached.

We would expect buying interest to arrest declines as was the case at the start of 2015: 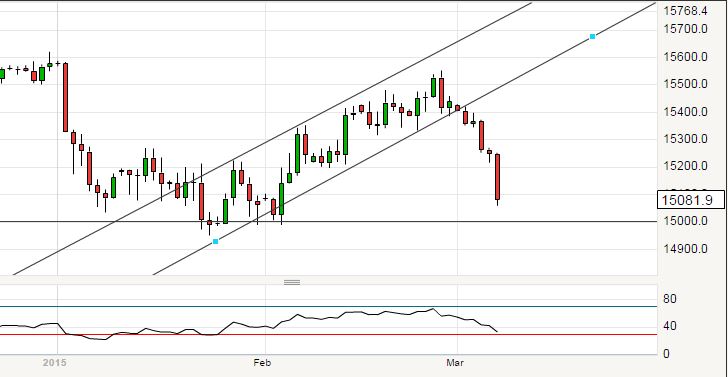 Above: A collapse in GBPUSD brings support at a conversion rate of 1.50 into play.

However, the ability of this support zone to provide long-term relief to the pound sterling remains in doubt – the strength of the dollar rally is simply too hard to resist, particularly following the release of the latest jobs data.

Kathy Lien at BK Asset Management says the outlook does not favour any major GBPUSD rebound:

"Unfortunately next week's U.K. industrial production and trade balance reports won't have a significant impact on U.K. rate hike expectations so in all likelihood, sterling's performance will continue to be driven by the market's appetite for euros and U.S. dollars.

David Lamb, senior dealer at the forex specialists, FEXCO, comments on why the conditions are right for the USD bulls:

"Goldilocks just got burned. For months US jobs growth has successfully walked a tightrope between too hot and too cold.

"But that cosy equilibrium has been upset by today's scorching number. Such a blockbusting rate of job creation will encourage the Fed to be more aggressive, and increase the prospect of an imminent interest rate rise.

"With the unemployment rate tumbling and wages growing steadily, Janet Yellen could begin notching up interest rates within months.

“Such macroeconomic bullishness will be catnip for Dollar buyers - driving the Greenback to new highs.

"The ECB's confirmation that the Eurozone will begin money printing next week had already put the Euro-Dollar rate on the ropes - this number will send it sprawling on the canvas."

Analyst Michael Gapen at Barclays tells his clients that interest rate rises are nigh:

“We expect the Fed to alter the March FOMC statement to eliminate the use of forward guidance, leaving the committee in a position to consider rate hikes on a meeting-to-meeting basis beginning in June.”

Campbell says a rate hike is likely in June:

“Yet again this strong non-farm figure causes the hawks to bang the June interest rate hike drum once more.

“After Yellen argued that jobs growth needs to be consistent before the Fed considers a rate hike, this figure merely adds more fuel to the fire; the doves, though, can point to the latest failure in wage growth as justifiable cause to maintain the Fed’s ‘patient’ outlook.

“Regardless, this round of jobs data was not enough for investors to get back on board with the US markets, as they failed to escape the slump that set in earlier in the week.”