"Key for the US dollar and rates will be whether his comments are enough to alter notably the expectations for the terminal rate. That level is currently at about 5.00%," MUFG

Sterling fought a losing battle to hold the 1.20 level against the Dollar on Wednesday after Bureau of Labor Statistics data suggested that last quarter's U.S. economic rebound from the depths of an earlier technical recession was stronger than previously estimated.

GDP growth was revised higher from 2.8% to 2.9% in the second of three estimates though economist commentary suggests the accompanying trade balance data is more informative of the outlook for the economy and a likely headwind for future economic growth.

"The increase in the goods trade deficit reflects a 2.9% drop in exports and a 0.9% increase in imports. Net trade has been a huge swing factor in GDP growth," says Ian Shepherdson, chief economist at Pantheon Macroeconomics.

The trade balance data showed the trade in goods deficit deepening in an October outcome that is likely to suppress GDP for the final quarter. 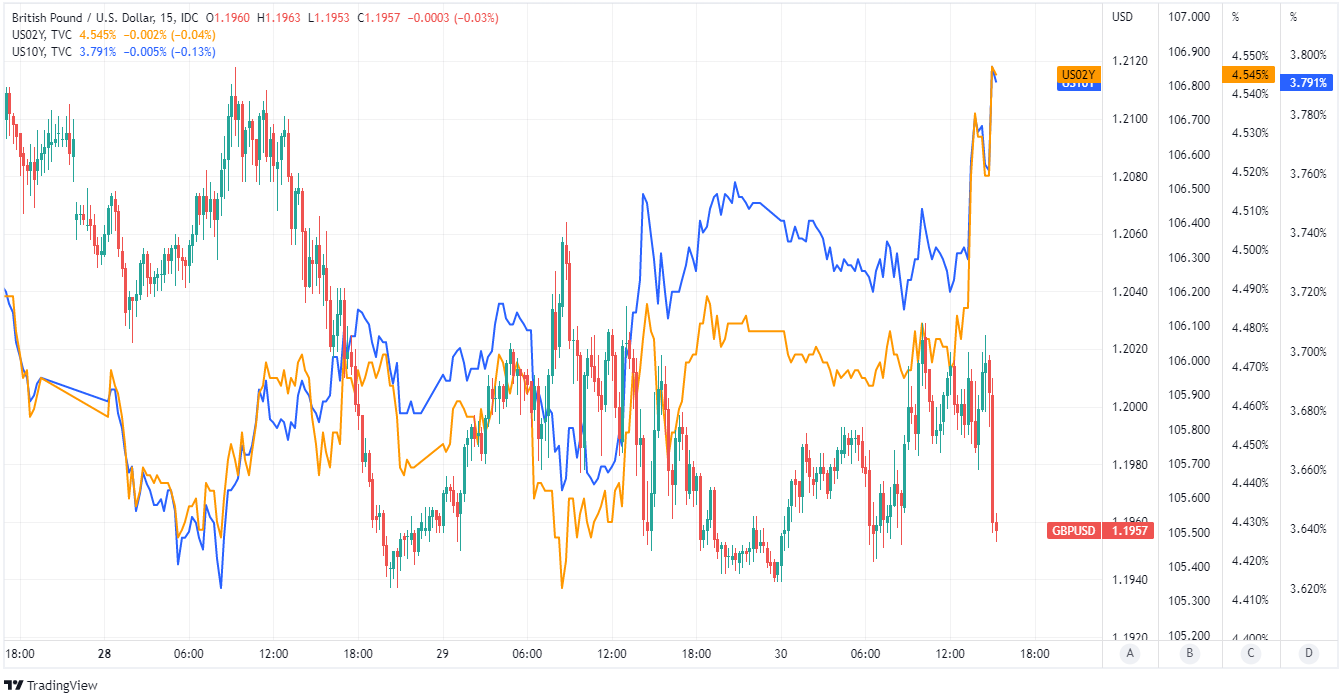 "The resulting drag on GDP will be much smaller than in Q1, but it would add to the already large list of factors weighing on economic growth," Shepherdson writes in a research review of Wednesday's data.

Imports of anything are treated as a subtraction in the calculation of GDP while exports of everything are an addition but with the latter expected to decline faster than the former, the outlook for "net trade" is seen as one more factor that is likely to hamper the U.S. economy next year.

Pantheon cites surveys of private sector firms for expecting exports to fall and imports of non-manufacturing goods to remain stable in the months ahead, leading to a deeper trade deficit and lower GDP growth than otherwise.

"Outbound shipments of industrial supplies and consumer goods were particularly weak, with the latter category also dropping off in imports," says Katherine Judge, an economist at CIBC Capital Markets.

"Exports (ex. autos) will likely remain under pressure due to the slowdown in economies abroad," she adds. 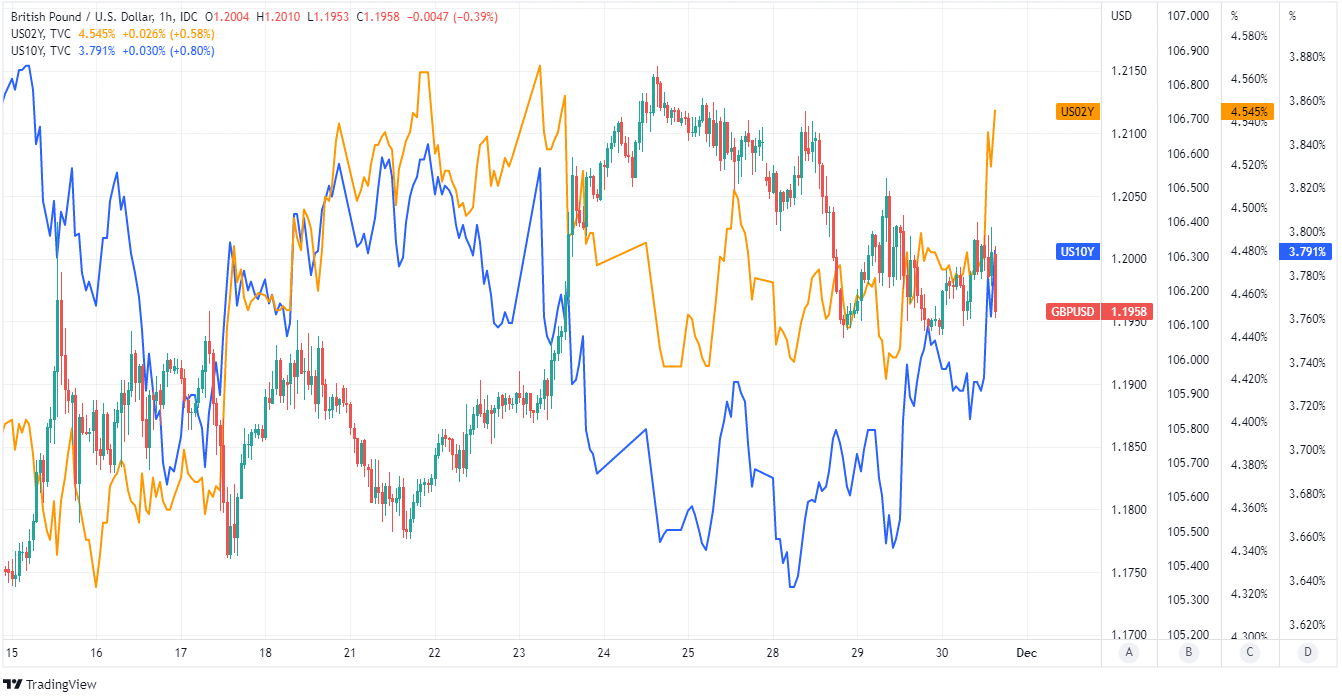 Above: Pound to Dollar rate shown at hourly intervals alongside 02-year and 10-year U.S. bond yields. Click image for closer inspection. If you are looking to protect or boost your international payment budget you could consider securing today's rate for use in the future, or set an order for your ideal rate when it is achieved, more information can be found here.

Wednesday's data comes ahead of a keynote speech from Federal Reserve Chairman Jerome Powell who's scheduled to discuss the U.S. economic outlook, inflation, and the job market at the Brooking Institution after the close of trade in London and Europe.

The speech itself will come as financial markets attempt to gauge how much further the Fed is likely to lift U.S. interest rates in the months ahead and for how long borrowing costs are likely to be held at their peak, with the ebb and flow of investor perceptions being a key influence on U.S. bond yields and the Dollar.

"Key for the US dollar and rates will be whether his comments are enough to alter notably the expectations for the terminal rate. That level is currently at about 5.00%," says Derek Halpenny, head of research, global markets EMEA and international securities at MUFG.

"The risks in our view firmly lie to the potential for a shift higher that would provide a further catalyst for the reversal of the recent USD selling," he adds.

Chairman Powell's address is set to be followed on Thursday by the October reading of the Fed's preferred measure of inflation and on Friday by the November edition of the closely watched non-farm payrolls report, both of which could also impact expectations for interest rates. 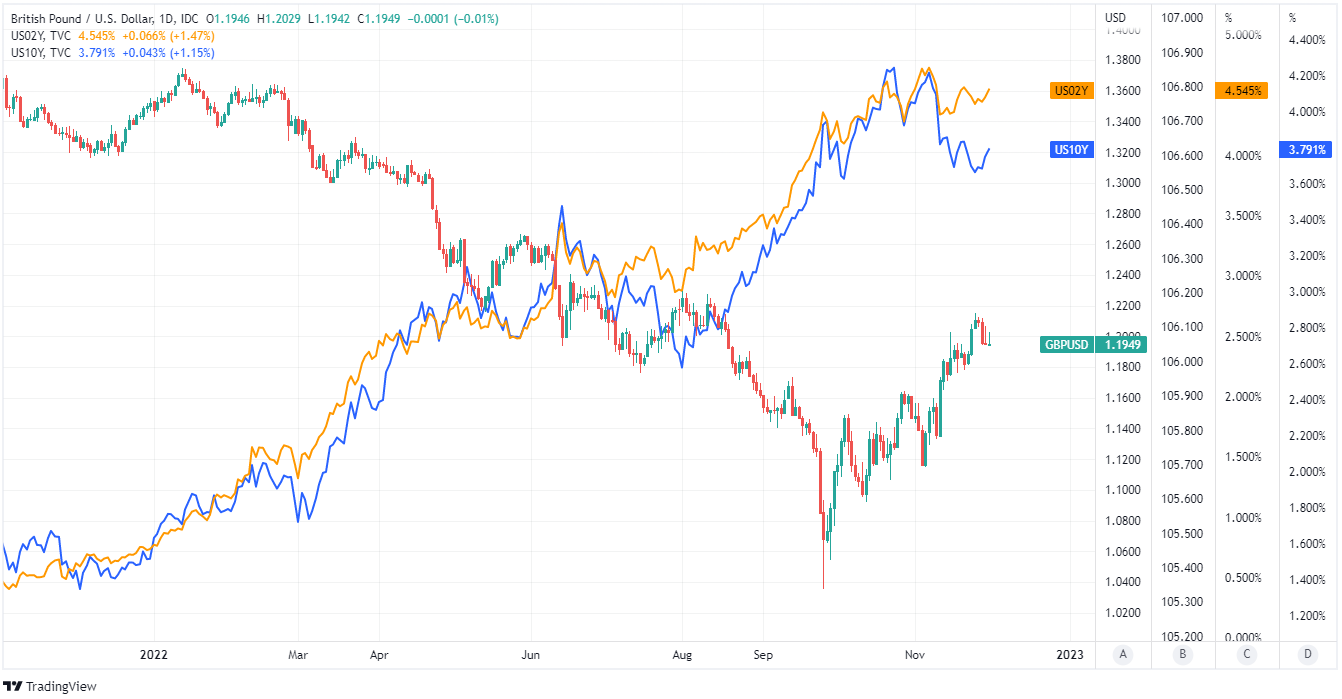