Pound Sterling can continue to advance against the U.S. Dollar as long as investors remain in an optimistic mood as a bear market relief rally extends, but analysts are warning the recent boost to sentiment could soon come to an end.

The Pound has rallied by about 4.6% against the Dollar over the course of the past two weeks as markets bet the U.S. Federal Reserve would end its interest rate hiking cycle in early 2023, amidst signs U.S. inflation was now peaking.

"GBP/USD is still over 9% below its 2-year average rate, but has climbed over 6% in the last ten trading days, helped by weaker U.S. dollar demand on hopes the US Federal Reserve will slow its rate-hike cycle," says George Vessey, an analyst at Western Union Business Solutions.

Pound Sterling enters the new week supported by an ongoing recovery in global stock markets and a positive investor response to last Thursday's Autumn Statement where the government committed to ensuring the nation's finances remain on a stable footing over coming years.

For financial markets, boring is better.

"In the short term, there seems to be a sense of relief following the recent carnage we saw in UK assets. So long as risk appetite is there, GBP should be supported," says Thanim Islam, Head of FX Analysis at Equals Money.

"Despite the gloomy UK economic outlook, some other macro factors suggest the pound could continue recovering, albeit slowly," says Vessey.

The Western Union analyst says support for GBP/USD could also be found in the UK's improving terms of trade relative to the U.S., the improvement in global risk appetite supporting risk-sensitive currencies like sterling, and the fact markets are pricing UK rates to be higher than U.S. rates by the start of 2024.

But Shaun Osborne, Chief FX Strategist at Scotiabank, says GBP/USD's short-term technicals are neutral/bullish and this could yield further upside over the coming days.

"Cable’s price patterns look generally positive on the short-term charts as the market consolidates the pound's recent push through key bear trend resistance (now 1.1468 on the daily chart). However, the pound needs to really push on further — above 1.20 — for gains to develop in the near term and establish a 1.20-1.25 range," says Osborne. 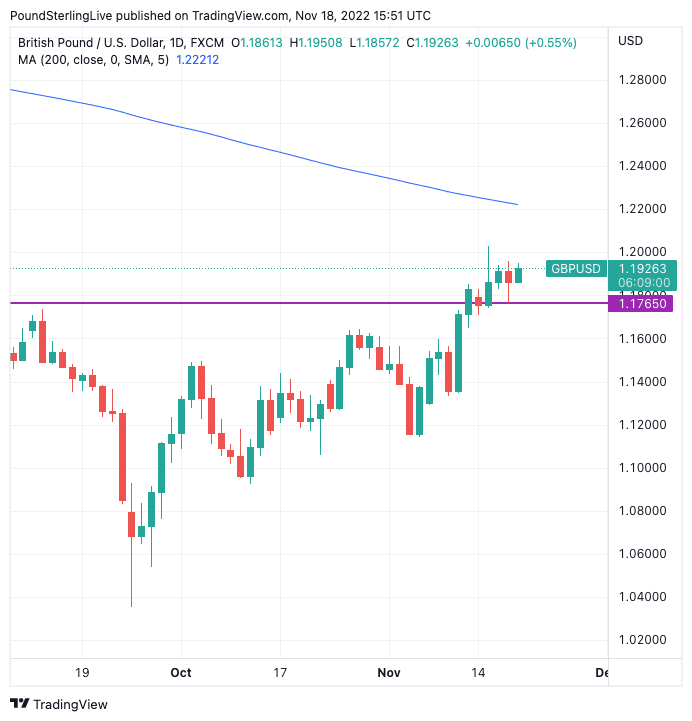 "Weakness back below here will undo a lot of the positive momentum the pound has developed over the past couple of weeks," says Osborne.

The Dollar's reversal lower in the wake of November 10's U.S. inflation release has been spectacular, but Valentin Marinov, Head of G10 FX Strategy at Crédit Agricole, says "the worst of the USD selloff seems to be behind us and we expect the currency to gradually recover more broadly given that it no longer looks as overbought and overvalued as before."

Such a development would cap GBP/USD's advance. (If you are looking to protect or boost your international payment budget you could consider securing today's rate for use in the future, or set an order for your ideal rate when it is achieved, more information can be found here.)

The Dollar retreated after headline U.S. CPI inflation figure showed 0.4% month-on-month growth in October, slower than the consensus estimate of 0.6% and matching September's 0.4%. In the year to October inflation rose 7.7% said the U.S. Bureau of Labor Statistics, defying estimates for 8.0% and marking a sharp slowdown on September's 8.2%.

The risk for those wanting a stronger Pound is therefore that the trend of recent weeks comes to an abrupt end.

"We expect the USD to recoup some of the losses in the near term, since a sustained drop - which we expect to happen later next year - would require stronger data showing inflation is slowing and a rebound of global trade," says Flury. 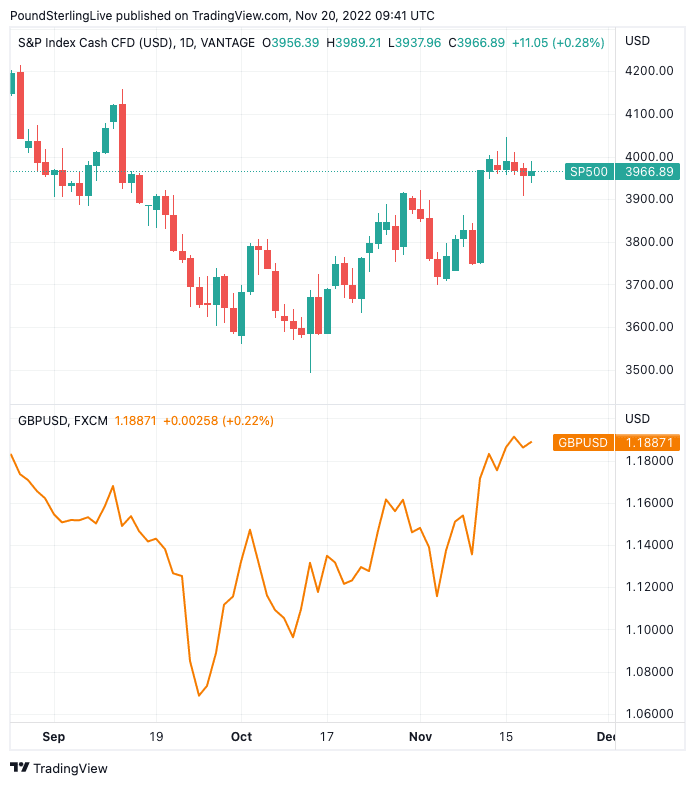 Above: The S&P 500 stock index (top) with GBP/USD at bottom, showing a positive correlation.

Looking at the data calendar, the highlight for the Pound this week is the release of the Purchasing Manager Index (PMI) surveys for November on Wednesday, which will give the first glimpse of how the UK economy is performing.

"A couple of PMI releases are due (this) week — important given the UK’s deteriorating growth outlook — and are likely to disappoint," says Thomas Flury, Strategist at UBS Switzerland AG. "We see weaknesses in the UK economy that would limit any upside for the pound."

The S&P Global/CIPS Manufacturing PMI for November is forecast to read at 45.6 when released at 09:30 GMT, down from October's 46.2.

Should the data beat expectations the Pound could find itself bid higher, but an undershoot would have the opposite impact.

"GBP remains stuck between a rock and a hard place as it awaits further evidence on how severe the recession has so far been across the UK economy. In that respect, Wednesday’s flash PMIs for November could offer more up-to-date indications on how much momentum UK activity has already lost," says Valentin Marinov, Head of G10 FX Strategy at Crédit Agricole.

For the Dollar, the coming week is a short one on account of the Thanksgiving holiday starting on Thursday.

Ahead of this, a number of Federal Reserve governors will attempt to warn markets that the interest rate hiking cycle is far from over, in order to try and ensure the recent relief rally doesn't result in a loosening of financial conditions.

Watch out for Master, George and Bullard, all due to speak on Tuesday.

The data highlight falls on Wednesday with the release of core durable goods orders (13:30 GMT), expected to read at 0.1% month-on-month in October.

Continuing jobless claims are also due for release at the same time, and a reading of 1.500K is expected.

The data is unlikely to provide any major surprises and a benign week for markets would be one consistent with further near-term GBP/USD strength.

But given the difficult outlook facing the global economy the current bear market rally will eventually reach its limits, and so too will GBP/USD.

"We continue to see downside risks for GBP/USD as the dollar may start to recover into year-end, and target sub-1.15 levels in the near term," says Francesco Pesole, FX Strategist at ING Bank.