The U.S. Dollar rally of 2022 may be in its final throes and in part because there's a risk of either a Volckerian Federal Reserve (Fed) decision next Wednesday or of a market disappointment with the outcome, and each could be enough to see 2022’s Dollar rush turning into a great U.S. Dollar flush.

Dollars have been bought left, right and centre this year, placing other currencies under immense pressure along the way but Tuesday's data out of the U.S. was significant for revealing a fresh upturn in the core rate of inflation, which could have game-changing implications for Fed policy.

“The latest CPI and PPI prints this week proved to be pivotal for the rates space. Resilient growth and still hot inflation might well require a more forceful response from central banks,” says Eugen Leow, a senior rates strategist at DBS Group Research.

“The upshot is the data thus far has been supportive of further tightening, and fading Fed cuts in 2023 (relative to the 2Q23 peak priced) makes sense. There might also be a bit of complacency on inflation expectations in longer term rates,” Leow and colleagues said on Thursday.

Tuesday's data came at a point when Fed officials have been expressing increasing concerns about rising inflation expectations, which are thought to have an uplifting impact on actual inflation rates in the future, and just as some Fed officials were citing the approach of 1980s Fed Chairman Paul Volcker as a model for dealing with the current inflation challenge. 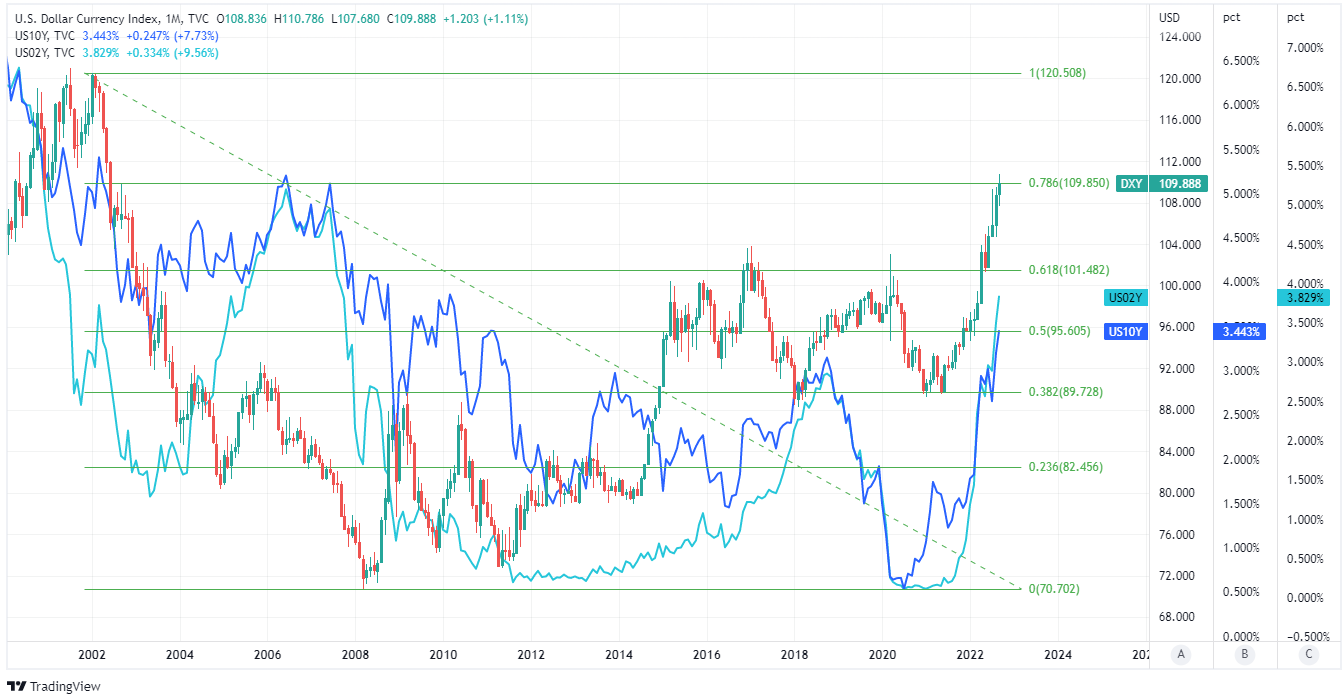 “The August US CPI rattled markets, prompting rates to add an additional 25bp to Fed hike expectations and provided fresh legs for the US$. In the absence of BoJ intervention and/or a sudden more optimistic turn in Europe's energy crisis the US$ likely stays bid into the Sept FOMC,” says Richard Franulovich, head of FX strategy at Westpac.

Chairman Volcker famously used brutally high borrowing costs to drive double-digit inflations rates out of the U.S. economy between 1979 and 1987, which was a volatile period for global financial markets as well as for the Dollar, which is relevant because it appears as if Fed Chairman Jerome Powell and 2022 colleagues may be about to follow in his footsteps next Wednesday.

However, it’s far from obvious that a Volckerian Fed decision would be in any way positive for the Dollar and not least because of its possible impact on the U.S. stock and bond markets, outflows from which could be enough to overwhelm and wash away the speculative punters who’ve lifted the greenback by double-digit percentages throughout the year thus far.

Above: U.S. Dollar Index shown at monthly intervals alongside S&P 500.

Stock markets are sensitive to increases in bond yields because higher ‘risk free interest rates’ mean companies have to work harder and deliver more to shareholders in order to justify their valuations, which is something that would becomes steadily more difficult - if not entirely impossible - in an environment where interest rates are going back toward the levels of decades past.

However, there is also another reason why next Wednesday’s decision could be likely to unravel the Dollar, and this is the risk of the Fed doing too little to satisfy a hawkish market, which has raised its expectations for U.S. interest rates markedly since August’s inflation figures were released earlier on this week.

There may be a chance of that outcome too, and perhaps more so if the Federal Open Market Committee finds in favour of the handful of economists who say that U.S. inflation is set to fall rapidly next year, which is a notion that many in and around the market might be likely to disagree with somewhat vociferously.

“The arguments in favor of much lower inflation over the next year remain intact. Margins will fall from their ridiculously over-extended levels as supply conditions normalize; the strong dollar and lower inflation outside the U.S., especially in China, will bear down on import prices,” writes Ian Shepherdson, chief economist at Pantheon Macroeconomics, in a Thursday research briefing.

“Rent inflation will slow, lagging the sharp drop in landlords’ asking rents, and a gradual moderation in wage gains will reduce inflation across an array of labor cost-sensitive services. But these processes are in their early stages right now, and the softening in core prices so far is modest,” Shepherdson added.