“This trade is easy to risk manage because if GBP decisively breaks 1.1400—it’s wrong. But if we hold, GBPUSD could rally to 1.18 for no good reason other than a candle of hope flickered in the UK darkness,” Brent Donnelly, Spectra Markets.

The Pound was left walking wounded following a sell-off almost as steep as that endured by the Japanese Yen this week but one speculative market participant has warned that night often feels darkest before dawn and most recently sold several other currencies in order to buy Sterling.

Sterling came close to the round number of 1.14 against the Dollar previously on Wednesday while underperforming all other major currencies except for the heavily sold Japanese Yen, which reached its lowest level since 1998 as the Pound traded at its weakest since April 1985.

Those losses came alongside widespread declines for stock markets and government bond yields across the globe but one trader and buyer of Sterling may have been cheered when the Pound to Dollar exchange rate drew a bid from the market around 1.1405.

“The technicals allow you to try to catch a falling knife and lose only a pinkie if wrong,” says Brent Donnelly, president at Spectra Markets and a career currency trader with time spent at hedge funds and a range of global banks including Lehman Brothers and HSBC.

“I do not do a trade because of a chart. But, when the chart offers an easy risk management setup against the backdrop of what looks like a decent behavioral and macro catalyst, that makes life so much easier. This trade is easy to risk manage because if GBP decisively breaks 1.1400—it’s wrong. But if we hold, GBPUSD could rally to 1.18 for no good reason other than a candle of hope flickered in the UK darkness,” Donnelly said on Monday. 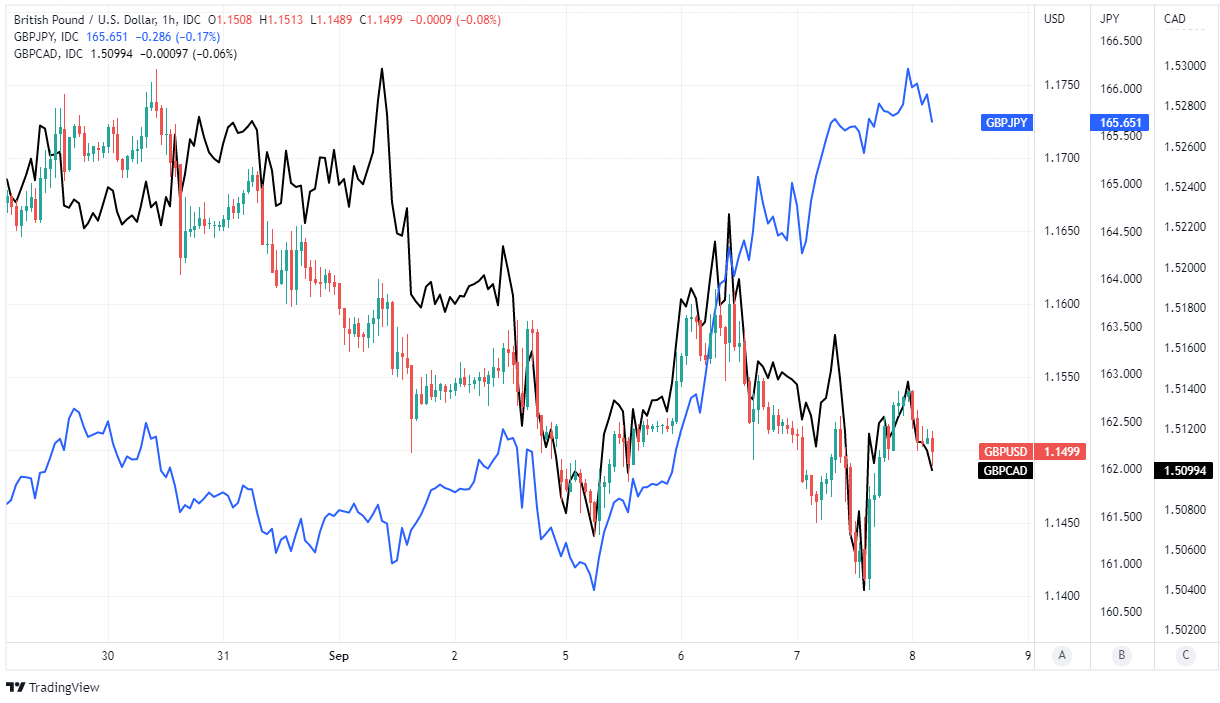 Above: Pound to Dollar rate shown at hourly intervals alongside GBP/JPY and GBP/CAD.

Donnelly advocated on Monday that subscribers to the AM/FX mailing list (anybody and everybody can sign up) chance their arm with bets on recoveries in GBP/USD and GBP/CAD as well as wagers on an extended rally in GBP/JPY.

Since then, GBP/JPY has reached its profit target and is no longer a trade, although the GBP/USD and GBP/CAD remain open and were still close on Thursday to their original entry levels.

“I don’t think the short GBP trade will work once she’s in. Whether the market is pricing Truss or just the energy crisis, there is a narrow window of opportunity here for a GBP sentiment shift,” he wrote.

“I still don’t love the idea of short USD here, so I’m looking at a variety of charts and I decided to go long a basket of GBPUSD, GBPJPY, and GBPCAD. For the sake of tracking, I will assign each trade 50% of normal capital so this GBP basket is 1.5X normal single trade risk,” he added.

The idea behind the ideas is that UK political uncertainty is no longer relevant following the Monday appointment of new Prime Minister Liz Truss. 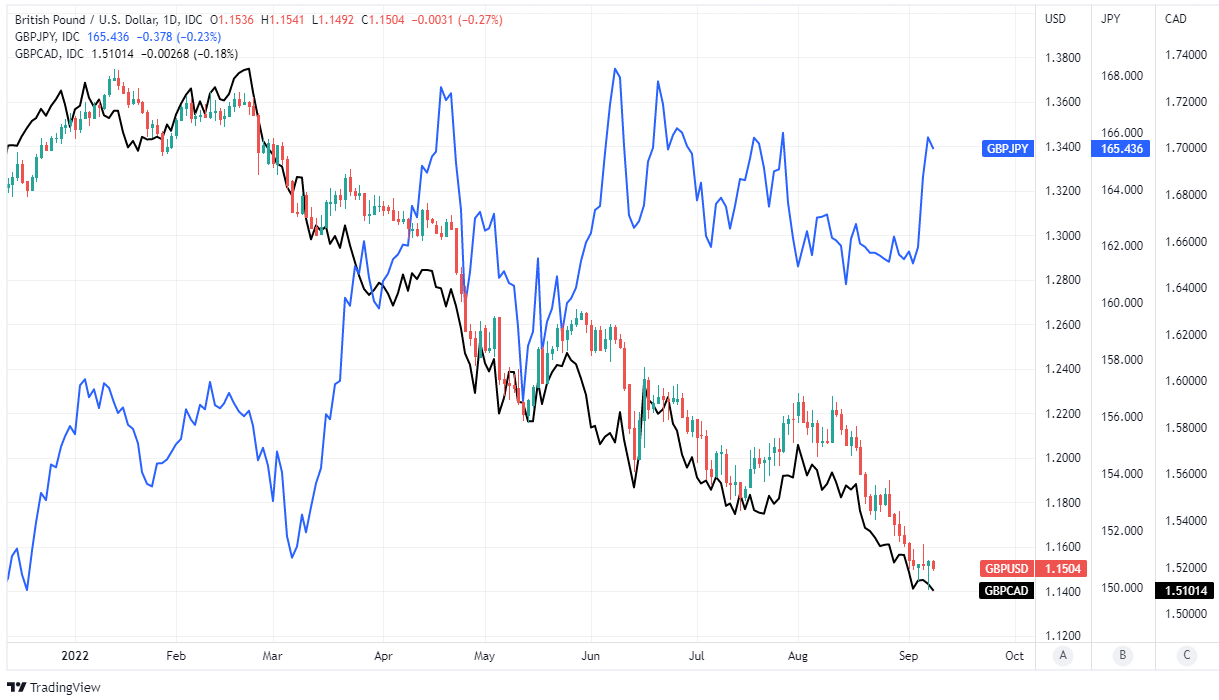 Above: Pound to Dollar rate shown at daily intervals alongside GBP/JPY and GBP/CAD.

“I am the first person to say that being contrarian just for the sake of being contrarian is a terrible strategy. Trends are a real thing. But the series of breathless headlines in the past few days and the change of leadership as a possible catalyst in the UK flashed me back to that study room in London, Ontario in 1995. The trick then was to plug your nose and just do the crazy thing,” Donnelly wrote.

It’s anybody’s guess as to what drove Sterling to its lows this week and likewise with the steep sell-off during recent months, although Bank of England (BoE) Governor Andrew Bailey singled out on Wednesday the strong U.S. Dollar, natural gas prices and uncertainty about UK government policy.

The UK economy has, after all, been adrift without a rudder during the months over which the Conservative Party leadership nomination process was taking place and during this time significant economic headwinds have gone unaddressed by HM Treasury and have complicated BoE policymaking.

“Well I think there’s a number of things going on. Some of them are UK specific and some of them are not. I think on the UK specific point I would just simply make the point that it is welcome that we will have a very clear policy stance, I would expect, by the end of this week,” Governor Bailey told the House of Commons’ Treasury Select Committee on Wednesday.

“The movement of Sterling is much greater against the Dollar than it is against other currencies so I think there’s a part of the story that is not UK specific, it’s actually a general Dollar story in the exchange market. As I said, I think there is a UK story. Now I think there are one or two reasons for that and number one is that I welcome the fact that the government is going to set out its policy this week. Secondly, the UK is heavily exposed to gas prices,” he said in testimony relating to the August Monetary Policy Report. 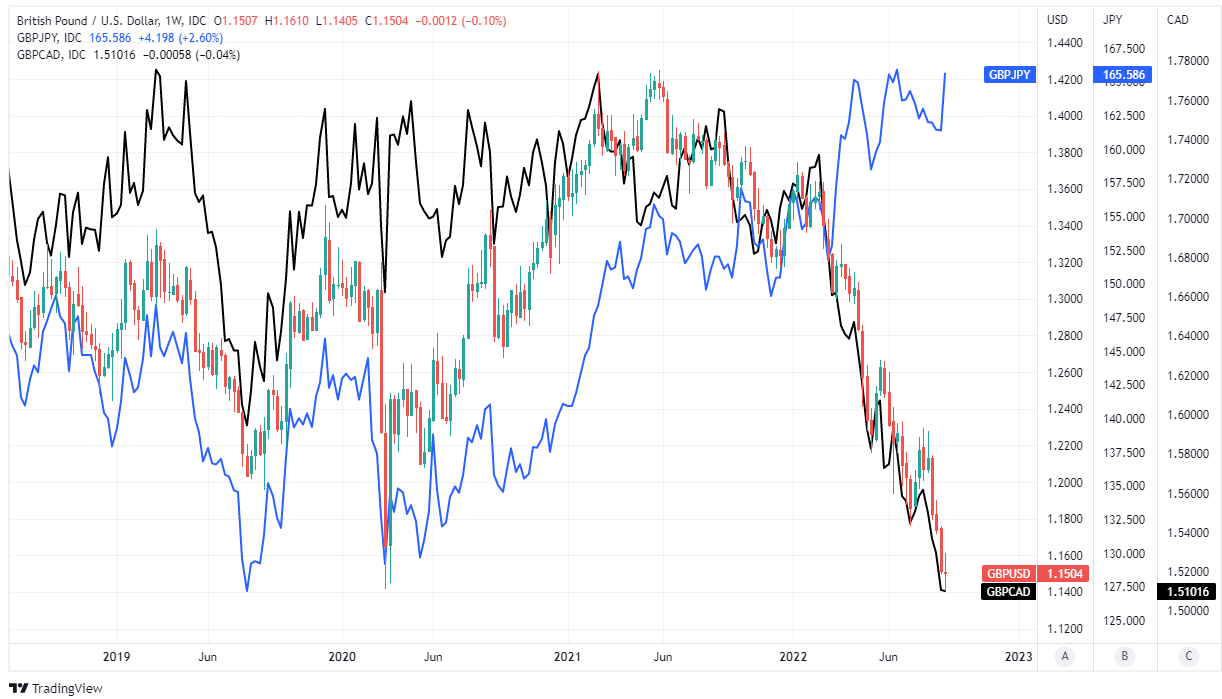 Above: Pound to Dollar rate shown at weekly intervals alongside GBP/JPY and GBP/CAD.