There could be some relief in store for battered holders of Pound Sterling looking to exchange into Dollars: the greenback's rally could be reaching its limits.

Analysis from MUFG finds the Dollar's strong run of appreciation against Sterling - in place since May 2021 - is set to fade as the market reaches a saturation point in terms of the number of rate hikes it expects from the Federal Reserve.

"The scope for further notable US dollar strength is diminishing based on the extent of monetary tightening now priced into the US rates curve," says Derek Halpenny, Head of Research, Global Markets EMEA and International Securities at MUFG.

The Dollar has advanced against the majority of the world's major currencies over the past year in a move that has pushed the Pound to Dollar exchange rate back to the 1.30 level.

The lion's share has been driven by the broader Dollar, as shown by the correlation between USD/GBP and the Dollar index: 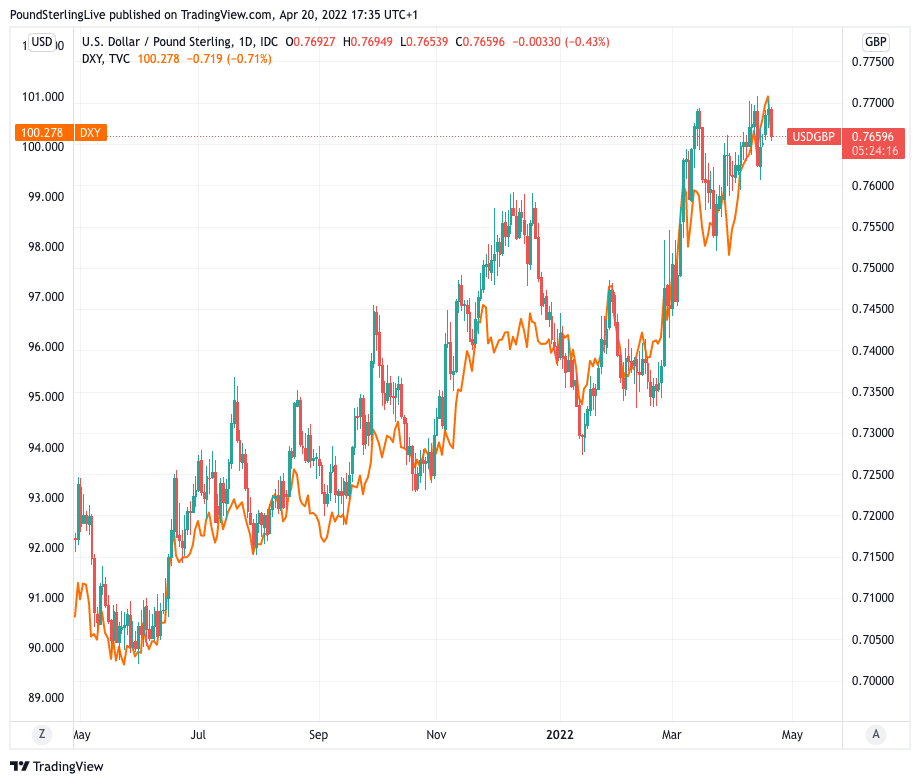 Above: USD/GBP and the Dollar index (in orange) at daily intervals, since May 2021.

Therefore, much of the Pound-Dollar rate's outlook ultimately rests with what the broader Dollar does.

Near-term focus will remain on the key 1.30 marker for GBP/USD, with a number of analysts we follow saying a near-term move below here and into the 1.20s is possible short-term.

Pound Sterling Live reported midweek the views of an analyst at currency brokers FXPro that the Dollar's rally - as measured by the Dollar index - could only be at the half way mark.

In fact, Alex Kuptsikevich, FxPro's senior market analyst, says his estimations could mean the Euro-Dollar exchange rate "plunges towards parity" and Pound-Dollar makes a return to 1.2000.

But MUFG says such dramatic declines are unlikely.

Analysts at the investment bank say the Dollar's rally is fuelled by a combination of the further aggressive move higher in U.S. yields and the uncertainty related to the conflict in Ukraine.

They acknowledge the prospect for further strength in the short-term, meaning dips in GBP/USD below 1.30 cannot be ruled out.

"With the Fed set to hike by 50bps over the next one or two meetings and with the conflict in Ukraine to persist, the dynamics driving FX are unlikely to change over the short-term," says Halpenny.

But he says the scope for further "notable U.S. dollar strength is diminishing based on the extent of monetary tightening now priced into the US rates curve."

He tells clients this signals caution over maintaining a U.S. dollar bullish view and consistent with previous tightening cycles.

"The US dollar could be close to peaking," says Halpenny.

MUFG says the surge in U.S. yields is unlikely to persist and they have turned more neutral on the outlook for the U.S. Dollar as a result.