Western Union Business Solutions says the Pound to Dollar exchange rate (GBP/USD) could be poised to make a decisive break below 1.30 this week.

The call comes as the exchange rate flirts with this psychologically important level with Sterling under pressure in the face of an ongoing appreciation in the value of the Dollar.

"The sterling-US dollar exchange rate has broken below the $1.30 handle several times over the past week, but although it’s still offering decent support, a deeper slide appears imminent based on current market dynamics and renewed demand for the safe haven dollar," says analyst George Vessey at Western Union Business Solutions.

"The pound, although supported by higher UK yields thanks to the Bank of England raising interest rates, is still vulnerable against the safe haven, higher yielding dollar. The $1.30 threshold could give way properly this week," says Vessey.

Dollar's were bought on Monday after Federal Reserve Bank of St. Louis President James Bullard said the U.S. central bank needs to move quickly to raise interest rates to around 3.5% this year and that it shouldn’t rule out rate increases of 75 basis points.

A 75 basis point hike would represent a dramatic sign of intent by the Fed to get on top of rising inflation and is something markets were not anticipating until Bullard's comments introduced the idea.

Investors now see about 215 basis points of rate hikes coming out of the Fed by the time the year is out, more than at any other developed market central bank.

Importantly the TOTAL amount of rate hikes expected from the Fed in the current hiking cycle has risen of late, which is typically supportive of a currency: 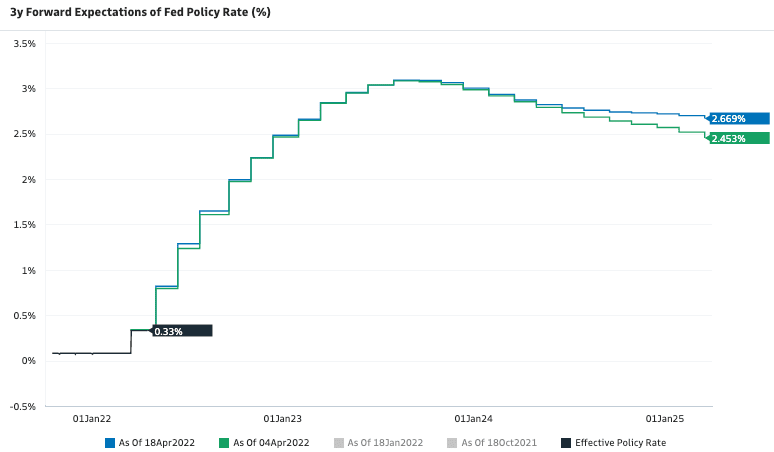 Above: Total amount of hikes expected from the Fed rises, image courtesy of Goldman Sachs.

"The US economy is much healthier and will weather the impact of the energy shock much better, allowing the Fed to really slam on the brakes to tackle inflation," says Marios Hadjikyriacos, Senior Investment Analyst at XM.com.

Taylor Broom, Paris-based FX trader at J.P. Morgan, says he will be watching this week's data releases to potentially prompt another leg lower in Sterling-Dollar.

"As inflation rages – 7% last week and should get to 9% (!) with the energy cap hikes leaving the consumer in a sorry state, we are very much now on the lookout for more signs of this to show up in the growth data and think this could be the spark that gets the move going again, retail sales and more importantly the flash PMIs will be interesting on Friday," says Broom.

The JP Morgan trader looks to sell rallies in GBP/USD "on the day towards 1.3080".

Retail sales are due Friday at 7AM BST and a headline figure of 2.8% growth is expected.

Flash PMIs are released at 09:30 and the market is looking for the composite PMI to read at a still-healthy 59.7.

Any disappointment presented by the actual outcome could offer a more decisive slide below 1.30.