The U.S. Dollar looks set to lose further value to the Pound in the wake of a below-consensus U.S. jobs report according to an analyst we follow, although others say any weakness in the Dollar will prove short lived ahead of an expected Federal Reserve interest rate rise.

U.S. non-farm payrolls for December read at 199K, putting it well below the 400K the market was expecting and signified a sharp slowdown in the U.S. labour market at year-end.

Following an inconclusive reaction by foreign exchange markets to the initial headlines the Dollar has lost value in the hours following the release: 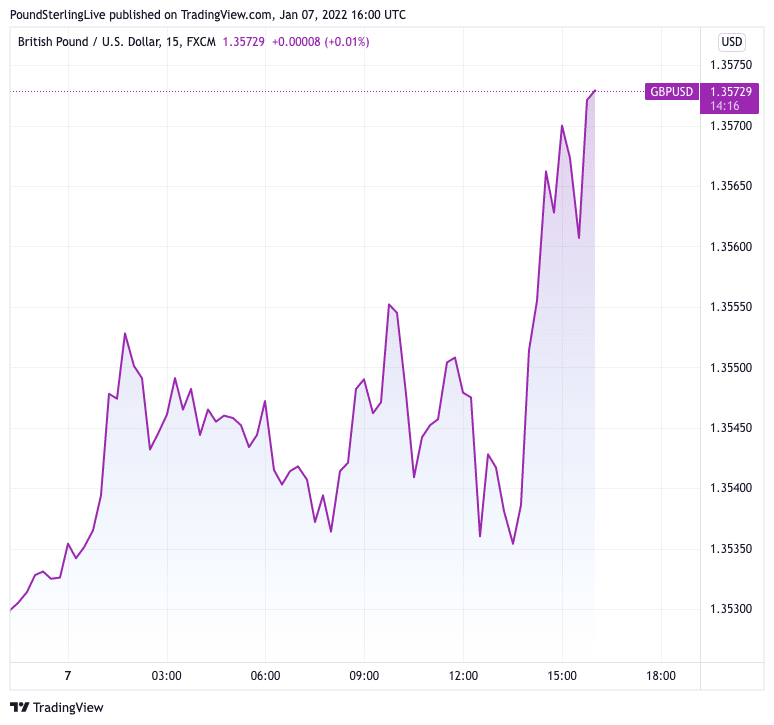 "With the leveraged funds at CME still positioned quite short GBP, with the daily uptrend still intact, and with buyers probing the top end of the 1.3520-50s range overnight, we think the path of least resistance is higher for sterling/dollar," add Bregar.

The U.S. unemployment rate nevertheless fell faster than expected to reach 3.9% from the 4.2% seen in November and the market could yet settle on a conclusion that the report is supportive of the Dollar.

Average Hourly Earnings rose 4.7% year-on-year in December, beating the consensus expectation for 4.2%, but coming in somewhat softer than November's 5.1%.

That the U.S. can be considered to be at 'full employment' could allow the U.S. Federal Reserve to proceed with raising interest rates as soon as March, which is supportive of the Dollar say analysts.

"Expectations of a more hawkish-sounding Fed are behind our bullish view on USD and financial equities," says Andrew Sheets, Strategist at Morgan Stanley.

The Fed's minutes to their December policy meeting showed concerns over surging inflation levels and has lead markets to price in a March rate hike and up to three further hikes in 2022.

"Given that the Fed seems to have fully swung behind the hawkish narrative, we would expect the dollar to stay strong today and be bid on dips even if the nonfarm payrolls disappoint," says Chris Turner, Global Head of Markets at ING. 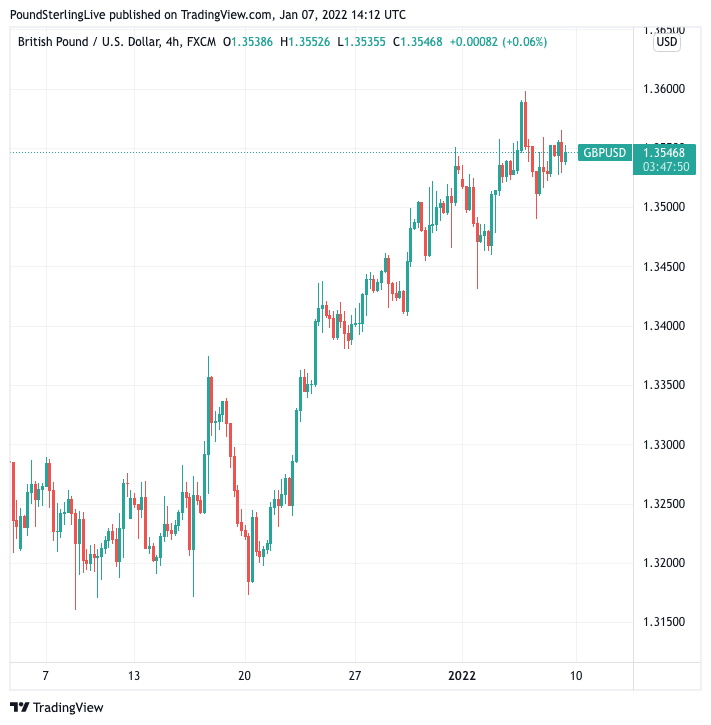 Above: GBP/USD four-hour chart showing the rally of December-January.

"Wages were up a lot – signs of broadening inflation continue and now looking like it’s much more than just supply side problems. Wage price spiral is in the offing and the Fed is catching up on this but still behind the curve. Now at the point where the narrative goes from transitory > supply side problems > demand/wage spiral," says Neil Wilson, Chief Market Analyst at Markets.com.

He says this will only beget further wage pressures and could pose a negative impact for GDP.

"In short a messy, confusing report but we can say labour market is tight and wages are squeezing higher," says Wilson.

The various signals coming out of the report therefore explain the lack of conviction in the foreign exchange market's reaction, allowing the trends in place before the release to ultimately remain intact.