The Pound's resilient tone against the U.S. Dollar won't last for much longer, according to strategists at HSBC who cite rising Covid-19 cases in the country as a reason to be cautious of Sterling.

"GBP-USD is proving resilient to increasingly challenging COVID-19 headlines as the hawkish rates market provides an offset. We suspect this resolve will fail," says Daragh Maher, Head of FX Strategy, U.S. at HSBC.

The Pound to Dollar exchange rate has rallied through the course of October and is now 2.43% up on where it started the month at 1.38, having fallen in both August and September.

The gains appear to be linked with a broader retreat in the U.S. Dollar which coincides with a move higher in U.S. and global stock markets, suggesting an improved investor sentiment that can often associated with Dollar weakness.

For its part, the Pound tends to benefit under such conditions while some additional support has come via raised expectations for a series of interest rate rises at the Bank of England.

But, Maher says sentiment towards Sterling risks deteriorating amidst rising Covid cases and expectations for additional restrictions to try and control the virus spreading.

"UK economic growth is slowing, in part due to supply constraints, but now risks being exacerbated by the prospect of new measures to contain an accelerating COVID-19 case count and deaths back to levels not seen since March," says Maher. 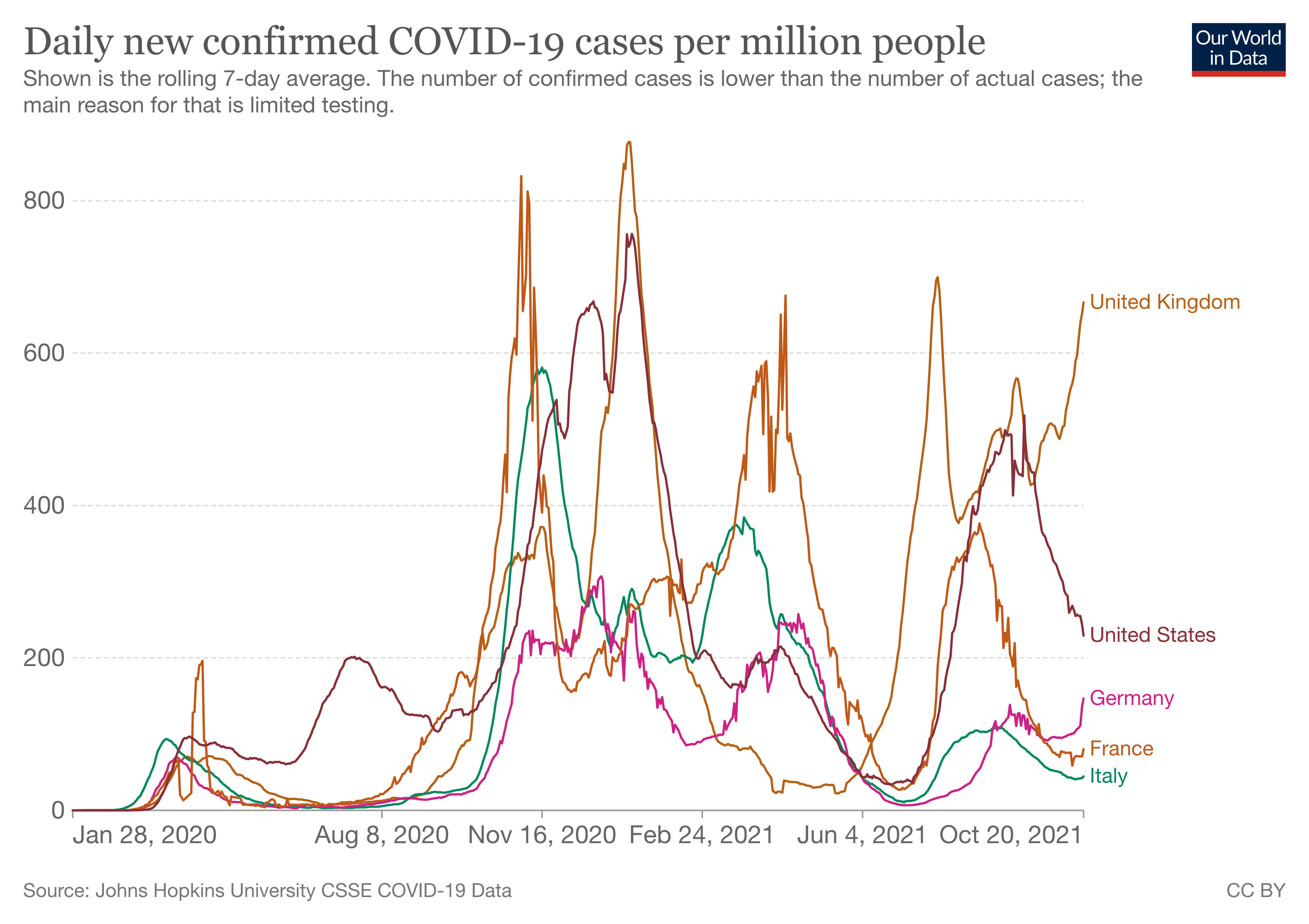 UK Health Secretary Sajid Javid nodded towards increasing case rates in the UK at a midweek press conference where he called on all eligible citizens to come forward for boost vaccinations.

The call forms part of a government strategy to focus on booster doses and the provision of new drugs that can improve medical outcomes for infected patients.

The government's Plan B for England would be invoked if it were deemed cases were high enough to overwhelm the health service.

Above: The UK test significantly more than its peers. To account for this we can observe case positivity rates, this shows the UK is not an outlier.

Plan B would see the enforcement of mask wearing in public places and the introduction of vaccination passport requirements at social events.

These requirements are already in place in Wales and Scotland which have higher case rates than England. (Scotland's case rate has recently fallen sharply, consistent with a decline in school age cases). 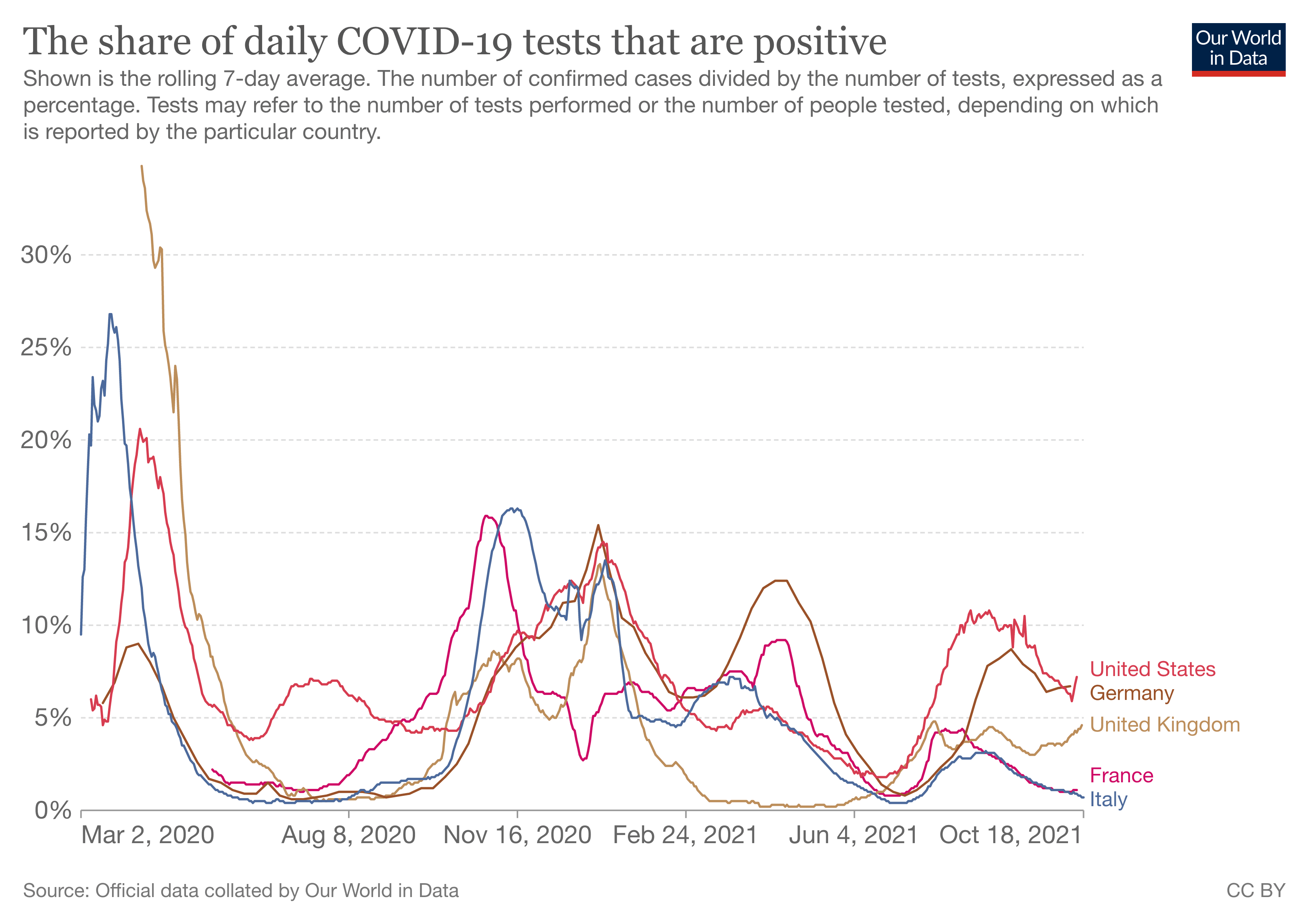 Above: The UK tests far more heavily than other comparable nations. To account for this, we can observe case positivity - the proportion of tests that come back positive - to allow for a clearer picture. On this count the UK is relatively unremarkable to major peers.

Maher however says the government's defence of its existing strategy is a sign that it is worried.

"It would seem strange for the BoE to hike into this uncertainty," he says.

He notes money market pricing is consistent with a 25 basis point hike falling in November.

"That’s a lot of hawkishness for a slowing economy coping with COVID-19 acceleration," says Maher.

"The UK is not alone in its recent hawkish renaissance, but not many in G10 are facing simultaneous news of the need for a “Plan B” approach to protect the health service," he adds.

Wales and Scotland have already effectively implemented those measures that form the thrust of England's Plan B, and given these nations fall under the remit of the Bank of England it is hard to see how asking citizens to wear masks in the entire country will derail growth.

Furthermore, the major Eurozone countries are already have significantly stricter Covid restrictions and policies in place that include mask wearing and the requirement to present vaccination passports.

On a relative basis therefore Plan B would see England align more closely with Eurozone peers.