The Dollar has fallen against all its major partners over the course of the past week, save for the Japanese Yen which is under significant pressure.

Declines for the U.S. currency come amidst an improvement in global investor sentiment which is traditionally seen as a headwind to both the Yen and Dollar which are considered counter-cyclical currencies.

In addition, investors appear to have fully digested the U.S. Federal Reserve rate hike story: a 2022 interest rate rise and a subsequent series of hikes are in the price, leaving Dollar bulls to look for the next triggers.

"Even the doziest FX trader is likely to have figured out by now that the US central bank Fed will soon start to taper its asset purchasing programme. The Fed was sufficiently clear about that in this respect. USD-positive surprises are unlikely to materialise on this front," says Ulrich Leuchtmann, Head of FX and Commodity Research at Commerzbank.

But an additional angle on the Dollar weakness is that it represents position squaring - or profit taking - which implies that the pullback is a potentially temporary phenomenon.

"Except for the yen, all G10 currencies strengthened against the dollar this week. However, we think this is mostly due to some USD profit taking, and we expect the greenback to re-join its upward trend soon," says Francesco Pesole, FX Strategist at ING. 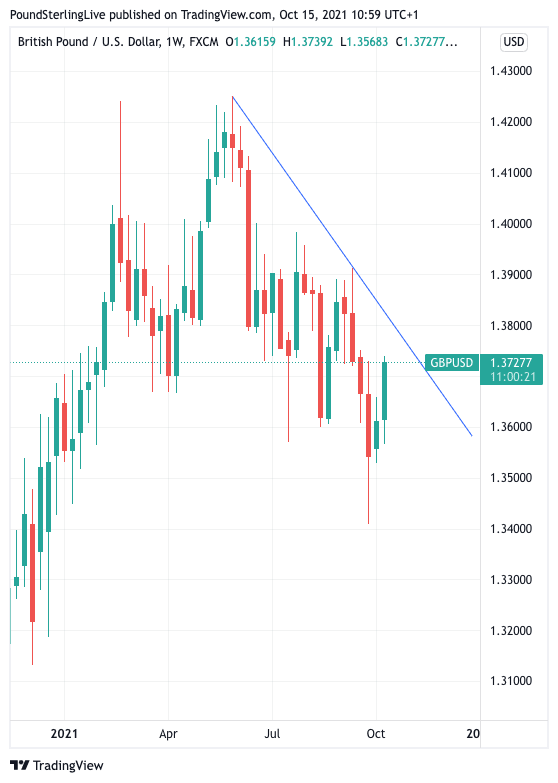 Above: Weekly chart showing GBP/USD downtrend, in place since May.

"The dollar has given up some of its recent gains this week, but we are reluctant to see this as a signal that the bullish sentiment on the greenback is abating," says Pesole.

"It appears more likely that the modest correction was triggered by some profit-taking on long dollar positions as markets now fully price in the start of Fed tapering by year-end and the first hike in September/November 2022," he adds.

The latest data from the CFTC showing how market participants are positioned on currency markets confirms betting on Dollar upside stands at close to 14% of open interest, which is the highest since November 2019.

"So some long-squeezing in the dollar seems quite plausible," says Pesole.

"US dollar weakness in the past two days looks to be more a positioning squeeze rather than any notable change in the global macro backdrop," says Derek Halpenny, Head of Research at MUFG.

The Dollar remains a significant driver of broader foreign exchange trends and much of the Pound-Dollar rate's weakness since May is down to a broader Dollar push higher, as per the below Dollar index chart which shows Dollar performance against a basket of currencies: 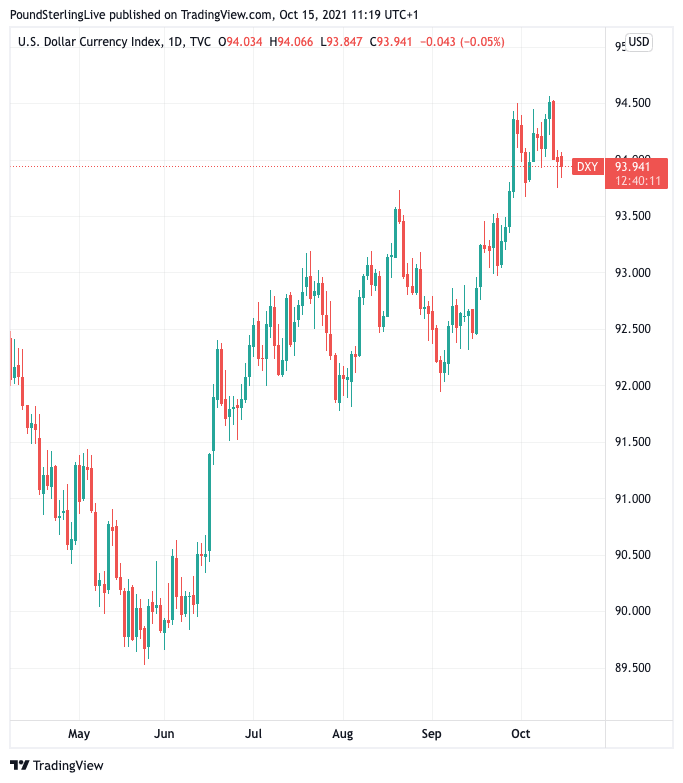 Whether the Dollar's run higher has ended, or is merely taking a breather, could therefore be the ultimate arbiter as to whether GBP/USD can turn higher on a more sustained basis.

Valentin Marinov, Head of G10 FX Strategy at Crédit Agricole says "the second coming of the USD" is not yet done.

He says the Dollar is benefiting from its status as "the high-yielding, safe-haven king of G10 FX".

The theme "is in full swing and we expect the currency to continue to outperform on the back of widening rate and yield spreads," says Marinov, in a regular currency briefing issued on October 14.

The prospect of higher interest rates in the U.S. - and at other global central banks - is expected to create a tightening in credit conditions that could undermine investor appetite.

"Further helping the USD is the fact that the US seems better insulated than other economies from headwinds related to the global energy crisis and the slowdown in China," says Marinov.

Crédit Agricole note demand for the U.S. currency in the forward markets have been intensifying of late, as reflected in the widening cross-currency basis swap spreads.

These developments reflect a number of drivers says Marinov:

(1) the growing USD rate advantage ahead of Fed taper;
(2) importers’ hedging flows in countries like Japan and the Eurozone that face soaring energy cost
(3) growing demand for USD funding into year-end as international borrowers try to lock in more advantageous conditions when rolling their FX liabilities.

"Growing demand for USD funding could coincide with falling supply of USD liquidity in the coming months as the FOMC taper and the debt ceiling resolution in December drains excess USD liquidity," says Marinov.