The Pound-to-Dollar was carrying gains against most major counterparts for the week on Friday but the Dollar will have an opportunity to turn the tide ahead of the weekend when August’s jobs report and services PMI hit the wires in the European noon hours.

Friday’s 13:30 release of last month’s non-farm payrolls report will help the market to anticipate more precisely when in the final quarter the Federal Reserve (Fed) is most likely to announce plans to begin phasing out its $120BN per month quantitative easing (QE) programme.

"The potential for Payrolls volatility is higher than usual given the Fed’s explicit linking of a spring taper to "further substantial progress” in the labour market,” says Mike Jones, a senior economist at ASB Bank.

“The USD has generally been on the backfoot since Fed chair Powell appeared to successfully de-link in the market’s mind a tapering of Fed asset purchases (likely in the next couple of months) to imminent hikes in the Fed Funds rate," says Jones. 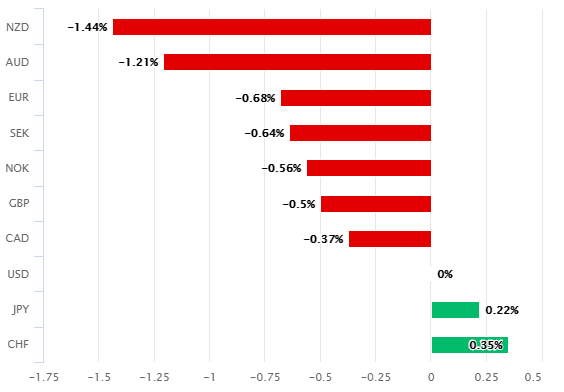 Above: U.S. Dollar performance against major currencies in five days to Friday.

Investors will also pour over the data for other reasons too, including because it could provide a steer on the likely duration of the wait faced by parts of the market before the economic preconditions for an initial increase in the Fed’s main interest rate are satisfied.

Consensus looks for 720k jobs to have either been created or recovered from the coronavirus in the U.S. in August, amounting to more than 10% of workers who remained unemployed in July as a result of the coronavirus, and making for a third consecutive month of job growth in excess of 700k.

"A number more in line with consensus (~750k) ought to solidify the current base case of a November announcement, while a downside surprise would force a reassessment of a 2021 vs early 2022 announcement," says Jonathan Cohn, a trading strategist at Credit Suisse. 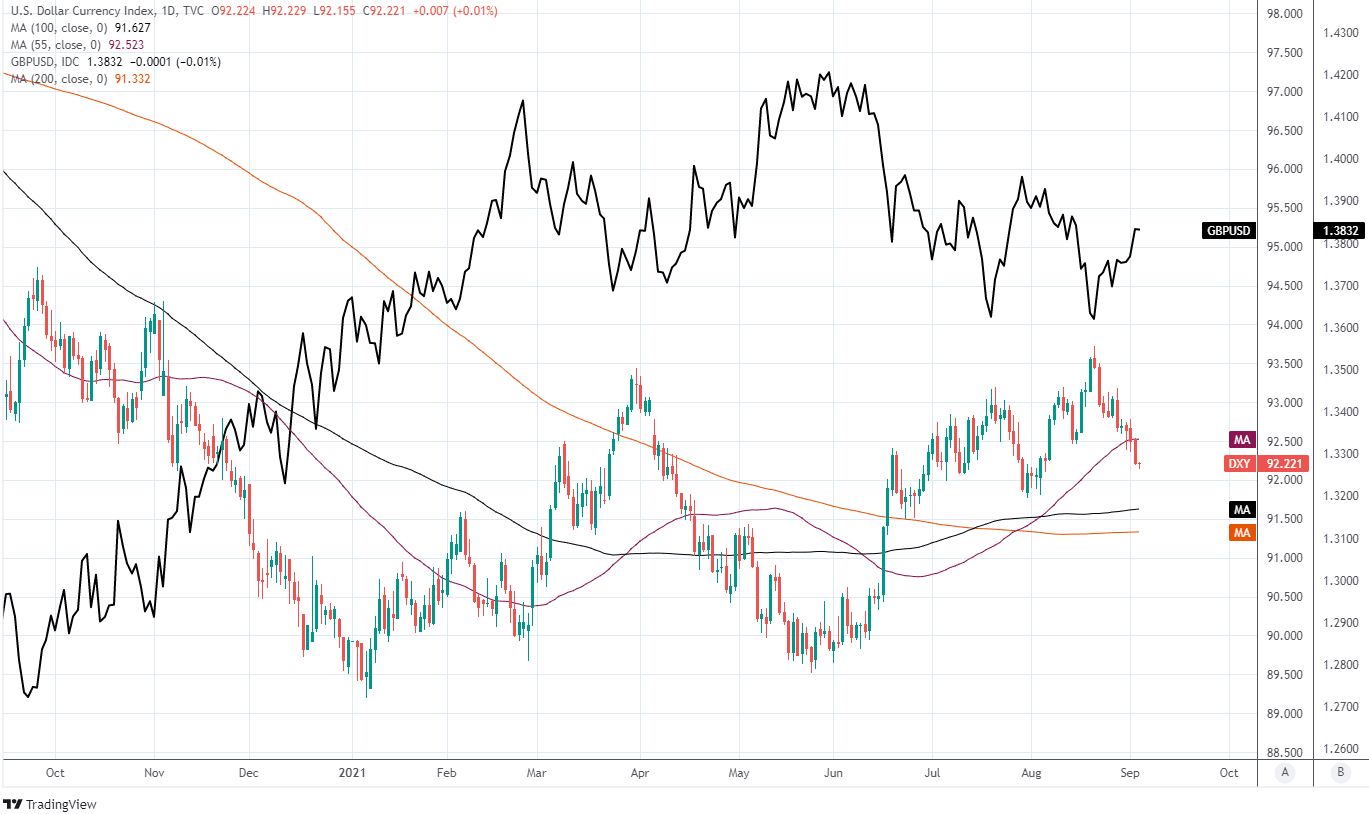 Above: U.S. Dollar Index shown at daily intervals alongside GBP/USD.

Even an August payrolls number that is merely in-line with market expectations could potentially prove supportive of the Dollar, which fell broadly for three consecutive sessions this week, as it could get parts of the market looking again at September for an announcement on QE from the Fed.

It may even be enough to engender confidence in those investors wagering or simply assuming that the Fed could lift interest rates as soon as 2022.

"Another strong payrolls in the 750k-1mn range for August would restore faith in rebound momentum and breathe fresh life into September FOMC taper announcement bets. That would likely stabilise DXY," says Richard Franulovish, head of FX strategy at Westpac.

The Fed has said it wants to see "substantial further progress" toward a complete recovery of the job market before ending the emergency bond buying programme, and that a total restoration of "full employment" is necessary before any eventual interest rate rise.

This makes the monthly job numbers doubly important for the Dollar and all other currencies, although the risk for the greenback on Friday could be more slanted to the downside than anywhere else given the strength of the two most recent job reports.

"A 400k rise in payrolls—our forecast for August—would be strong by pre-COVID standards, but it would be well below the 900k+ readings in June and July," Ned Rumpeltin, European head of FX strategy at TD Securities.

"We don't think a 400k reading would be weak enough for Fed officials to back away from their "this year" tapering signal, but it would probably increase the probability of a formal announcement coming at the December rather than the November meeting," Rumpeltin writes in a research note.

The job data will be followed by August’s Institute for Supply Management Services PMI at 15:00, which reached a record high in July and may also have been susceptible to a retrenchment last month. 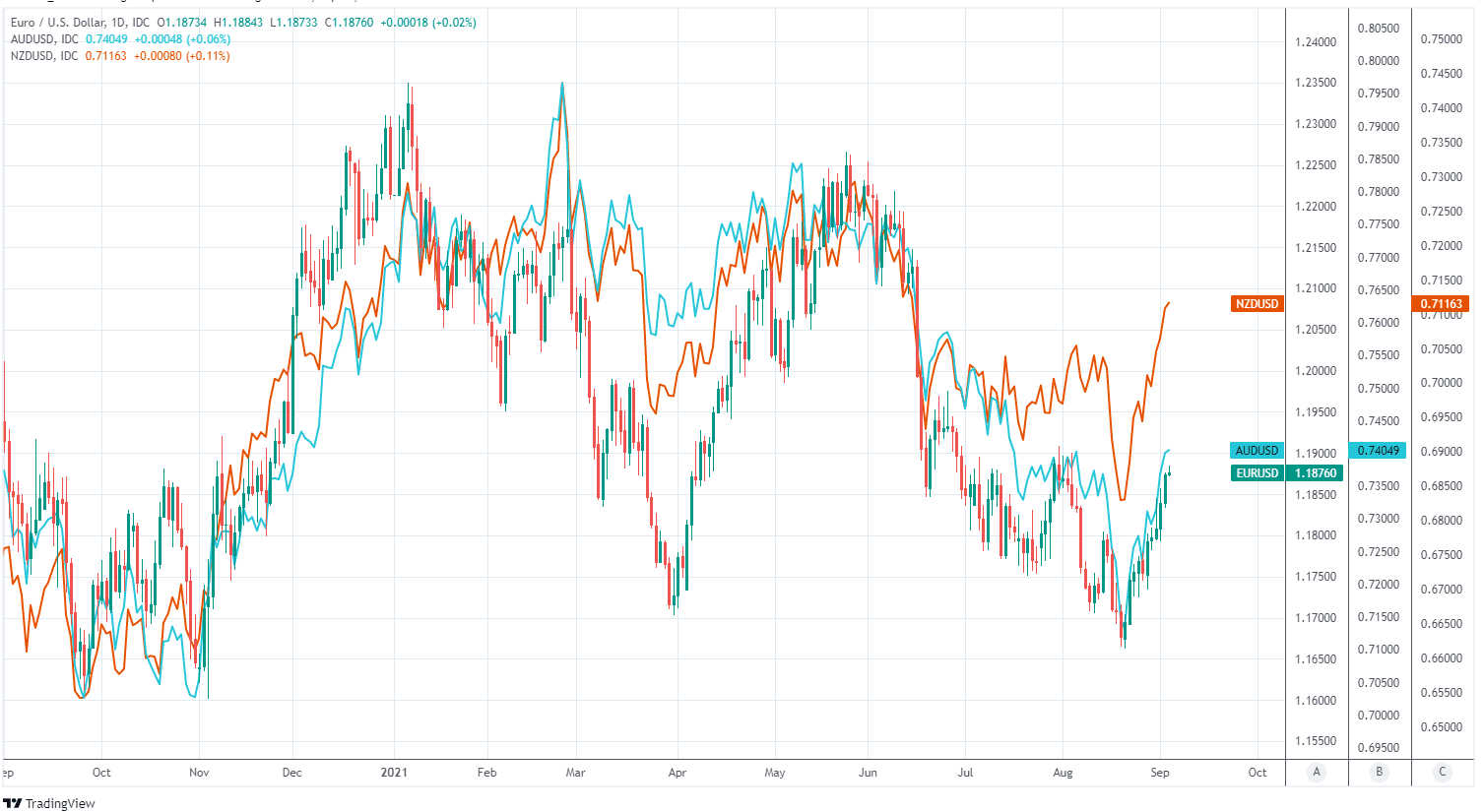 Above: Euro-Dollar rate shown at daily intervals alongside NZD/USD and AUD/USD.