The Dollar Index stabilised on Thursday following widespread declines in the last week that have almost no major U.S. exchange rate untouched although analysts at Citi FX and Westpac say recent losses likely foreshadow further falls that could see the greenback return to early February lows.

Dollar exchange rates were a mixed bag on Thursday as most European currencies softened ahead of the April policy decision of the European Central Bank (ECB), which loaned the U.S. Dollar Index a fractional intraday gain.

But the ICE Dollar Index has fallen just more than half a percent this last week and almost a full percent on a one-month horizon, reflecting the erosion of nearly half the greenback’s first-quarter gain, and is seen by some analysts as being on the cusp of another leg lower.

“We expect a move lower towards the Feb 2021 low at 89.68,” say Calvin Tse and Ebrahim Rahbari at Citi FX, referring to the ICE benchmark in a research note this week.

The Citi FX team says a return to February lows could be just the beginning of a renewed U.S. Dollar downtrend now that American bond yields have fallen meaningfully from earlier highs and investors have had time to contemplate and effectively price-in a world-leading economic recovery. 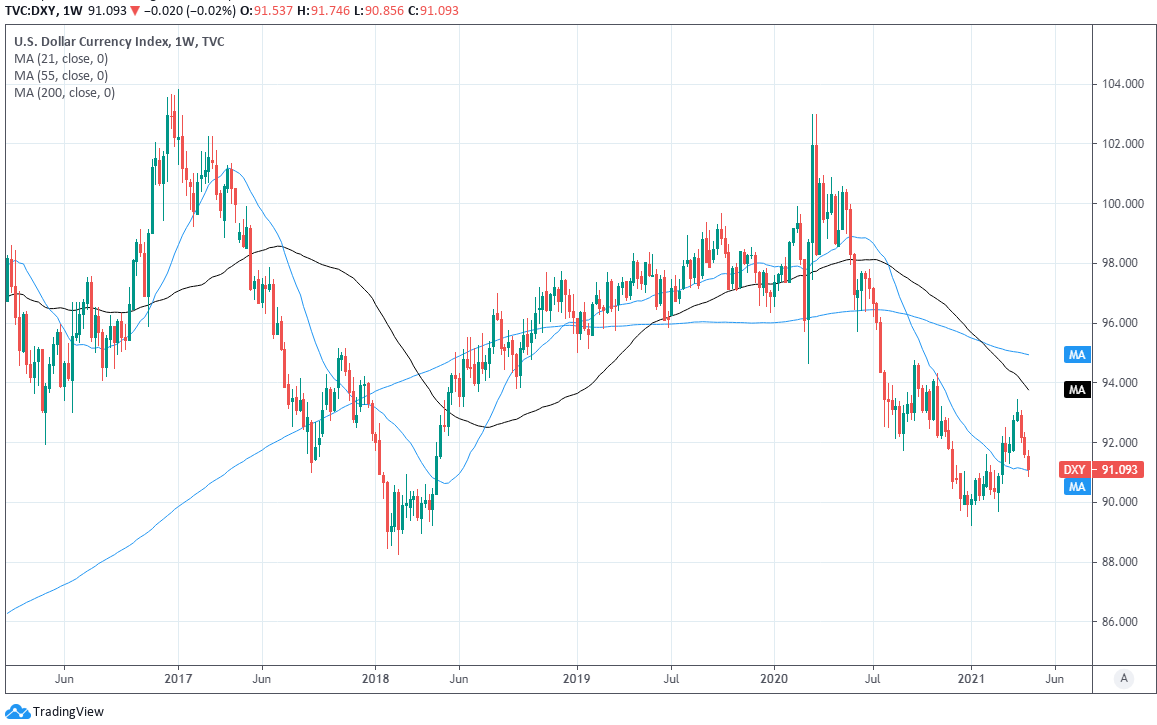 America has been closing the gap with the UK, Israel and other countries on vaccinations, in the process paving the way for a sustained reopening of the economy which will be supported by unprecedented public financial support provided for by Washington and the Federal Reserve (Fed).

Trillions in fiscal stimulus from Washington and the Fed’s newly heightened tolerance for above-target (2%+) inflation pressures are as much a shot in the arm for the global economy and non-U.S. currencies as they are for the world’s largest economy.

“We believe that the USD peak is behind us. We still believe that the next big move in the dollar is pointed to the downside, resulting in large asymmetry in the fate of the USD in the months ahead,” write Tse and Rahbari.

Likely increases in U.S. import demand are a stimulant for other economies and currencies overseas while the Fed’s policy is a ball and chain around the ankles of the Dollar, given that interest rates are likely to remain near-zero even as inflation rises above the Fed’s 2% target.

The latter will eat into the real-terms returns earned by investors who hold Dollar-denominated bonds, which is bearish for a U.S. currency that may also suffer if and when foreign investors in U.S. stocks grow fearful of Dollar depreciation pressures.

This could compel some to increase hedging ratios, which would involve active and overt speculation against the greenback, though with parts of Europe’s path to recovery still shrouded in albeit-reduced uncertainty some other analysts are sceptical of suggestions the Dollar could see new lows.

“Faster vaccinations and reopening will help the Eurozone close the immediate yawning underperformance gap with the US, but it won’t completely eliminate it,” says Richard Franulovich, head of FX strategy at Westpac.

The Westpac team sees the Dollar Index as likely to fall further back into the low 90’s area over the coming weeks and months but sees a break below 90.0 as one bridge too far.

The ICE Dollar Index in question measures the U.S. currency against six of its most frequently traded rivals including the Euro, Japanese Yen, Pound Sterling, Canadian Dollar, Swedish Krona and Swiss Franc.

With the exception of Sterling and the Canadian Dollar, which account for 21% of the barometer combined, all of the other currencies in the index have ceded ground to the greenback thus far in 2021 and in the process generated what was still a 1.34% increase on Thursday.

Most notably the Euro was still down 1.5% despite a handsome rebound over the last month, with residual losses likely explaining much of the lingering Dollar Index gain given the European single currency’s large 57% weighting in the benchmark.

Residual declines for the Japanese Yen and Swiss Franc were more meaningful however, given the size of losses as well as their collective 17.2% weighting in the barometer.

USD/JPY was still 4.9% higher for 2021 on Thursday while USD/CHF was carrying a 3.5%, though both exchange rates have also meaningfully pared earlier gains in losses that accrued this last month.