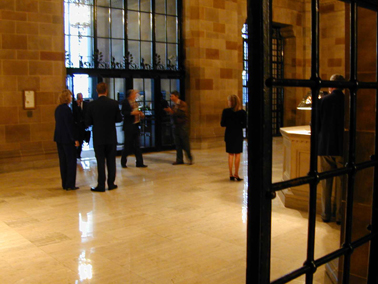 The Pound-to-Dollar exchange rate starts the new week on a stable footing having suffered a half-percent decline on Friday amidst further gains for U.S. bond yields, but the 1.40 level could yet still be overcome this week en route to new highs as the Federal Reserve (Fed) is tipped to curb appetite for the Dollar and Sterling is aided by the Bank of England (BoE).

Pound Sterling ended the week on a stretcher after another blowout in the American bond market appeared to inspire profit-taking that wounded most risk currencies while lifting almost all U.S. Dollar exchange rates, with GBP/USD the most injured among all major exchange rates.

Last minute Pound-Dollar rate losses saw Sterling ceding its position as the best performing major currency of 2021 to the now-outperforming Canadian Dollar but nascent enthusiasm for the greenback could be tempered over the coming days if the Fed does as some analysts suggest it will and leaves hawkishly optimistic financial markets disappointed by its outlook for interest rates.

"In a week in which the clocks go forward in North America, FX markets will be focusing on the FOMC meeting on Wednesday. It looks too early for a significant change in the Fed’s dovish tone. Risks assets could strengthen and USD weaken once this event passes," says Chris Turner, global head of markets and regional head of research at ING, who together with colleagues looks for GBP/USD to return to 1.40 this week. "Away from the Fed, US data released over the next week should be a little less impressive." 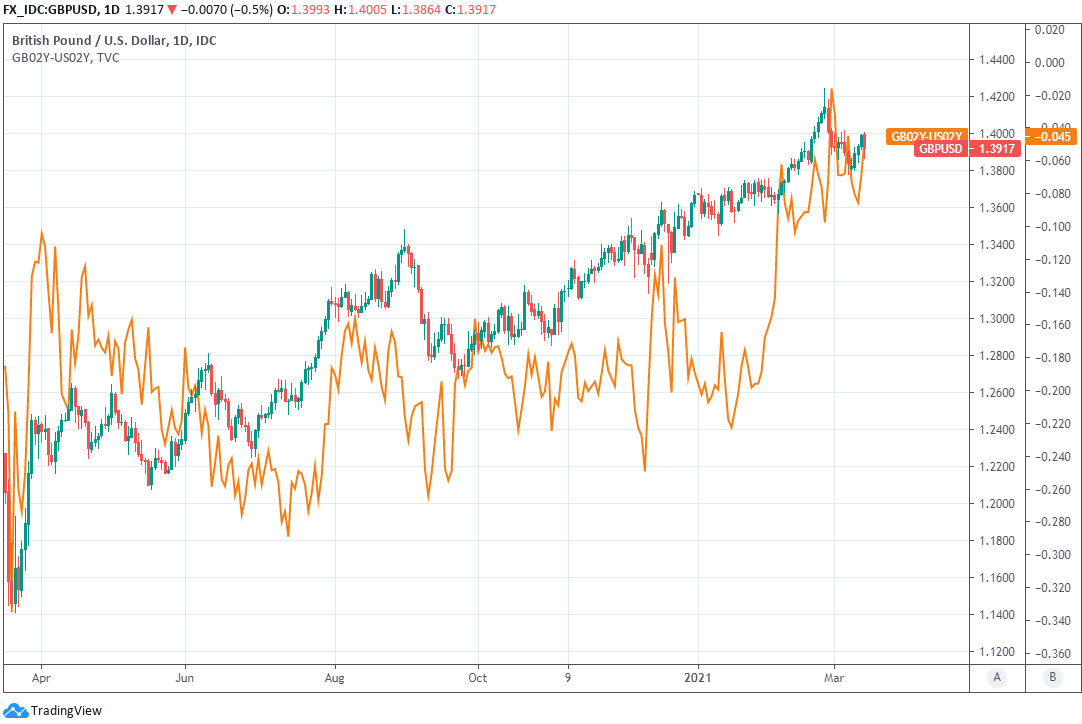 Above: Pound-Dollar rate at daily intervals with 02-year UK-U.S. bond yield spread. This would improve in favour of GBP with a 'dovish' Fed and contented Bank of England this week. .

The highlight of the week is a double shot of central bank announcements beginning with the Fed on Wednesday at 18:00 London time, one hour ahead of the usual slot, which could see Dollar bullish punters bitterly disappointed and Sterling's upward momentum revived decisively.

"GBP/USD is undervalued relative to the level implied by real UK‑US bond yield differentials (using 2 or 10yr yields) and purchasing power parity (PPP). GBP/USD PPP based on relative GDP deflators is around 1.5500," says Elias Haddad at Commonwealth Bank of Australia. "We are long GBP/USD from 1.3865 with a stop loss at 1.3720. Our target for this trade is 1.4500."

Progress in ramping up vaccinations such that the U.S. may now be in with a chance at having offered all adults a shot by May 01, combined with President Joe Biden's sign off on a $1.9 trillion financial support for companies and households, has lifted expectations for the world's largest economy.

Improving growth expectations have lifted bond yields sharply and had investors anticipating the Fed could begin to signal this week - using its so-called dot-plot of policymakers forecasts for rates - that an initial increase in the Federal Funds rate range from 0% to 0.25% may be announced as soon as 2023.

But investors overlook that the Fed is seeking more bang for its buck in terms of the U.S. inflation target than is the case with other central banks, which necessitates a "lower for longer" interest rate stance.

Expectations for a rising rate signal also fail to take account of a tightening in so-called financial conditions due to a stronger Dollar, higher yields and recent declines in stock markets, among other things. This will not necessarily be welcomed by the Fed in light of its new inflation objective.

"Our base case is that most officials will stay conservative in their submission of the funds rate at this point in the recovery and will not show a hike in 2023. A small upward adjustment to the 2023 dot this quarter could muddy the FOMC’s message, and present challenges to the Fed’s communications efforts," says Kevin Cummins, chief U.S. economist at Natwest Markets. "A good deal of attention will be focused on how the statement describes inflation."

Investors have evidently forgotten that forecasts for the economy were improving, the job market had bottomed and inflation expectations had recovered the Fed's 2% target when in November 2009 the FOMC surprised the market by announcing its second ever quantitative easing programme. 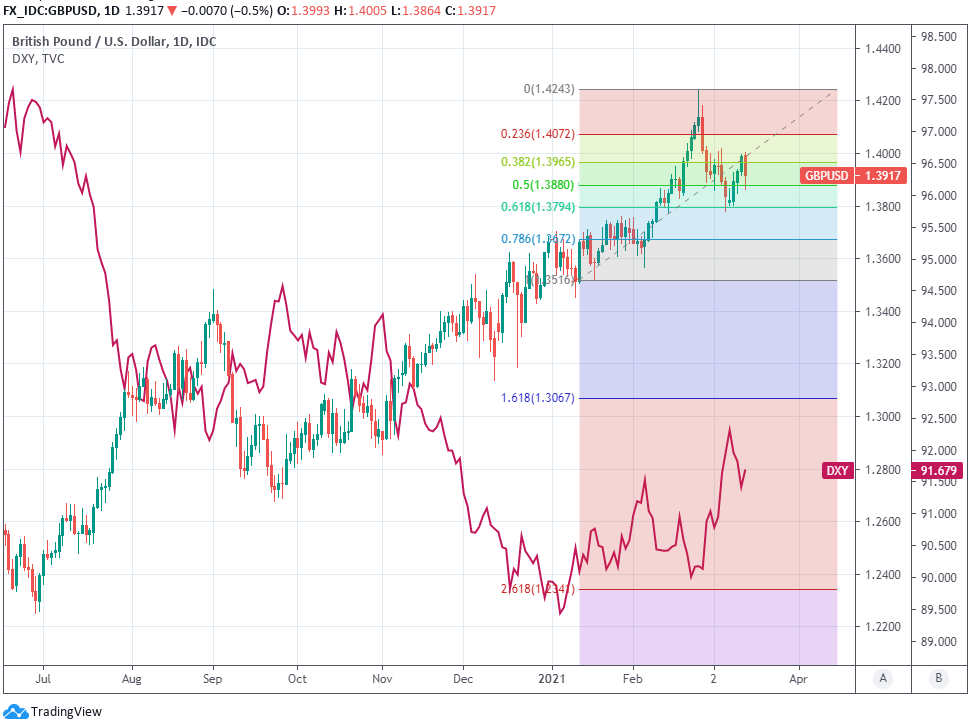 The Fed's new average-inflation-targeting framework means it now has to generate even more inflation pressure than was the case previously, or is currently the case elsewhere, which necessitates an even lower-for-longer rate stance than is the case at other central banks. Markets are yet to properly internalise this, which is evidenced by speculation the Fed could use Wednesday's announcement to signal that a 2023 rate rise is possible.

"We expect the FOMC to work to rein in market policy rate expectations, with futures markets anticipating three hikes over the course of 2023. Although recent communications suggest that participants are comfortable with some steepening of the yield curve in light of improved growth fundamentals, the committee will be eager not to ratify expectations of an earlier lift-off, which seem premature," says Michael Gapen, head of U.S. economic research at Barclays. "For now, we think the committee will be content to employ communications to influence expectations, keeping its heavier artillery (such as lengthening the duration of monthly Treasury purchases, a “twist” operation, or even yield curve control) in reserve, for now. We expect the updated dots to show that the median participant still does not anticipate lift-off through 2023."

Rising bond yields, falling stock markets and a stronger Dollar have all helped drive 'real' yields higher across the curve and contributed to tighter financial conditions that the Fed may want to rectify this week through its rhetoric, which would be supportive of Sterling. Pound-Dollar gains would be especially likely if a 'dovish' Fed outcome on Wednesday is followed by a 12:00 announcement from the Bank of England on Thursday in which London's rate setters indicate comfort or ease with recent moves in British bond yields.

The BoE is less ambitious with the inflation it seeks to generate and has had little trouble meeting its existing target in recent years so may be comfortable with more 'hawkish' market expectations for rates in the UK. Both the bank and investors have recently expressed confidence that inflation will return to 2%, which has helped cultivate market expectations of a Bank Rate that rises from 0.1% as early as 2022. As a result, the BoE could be among the first in the major economy space to eventually 'normalise' its interest rate policy. 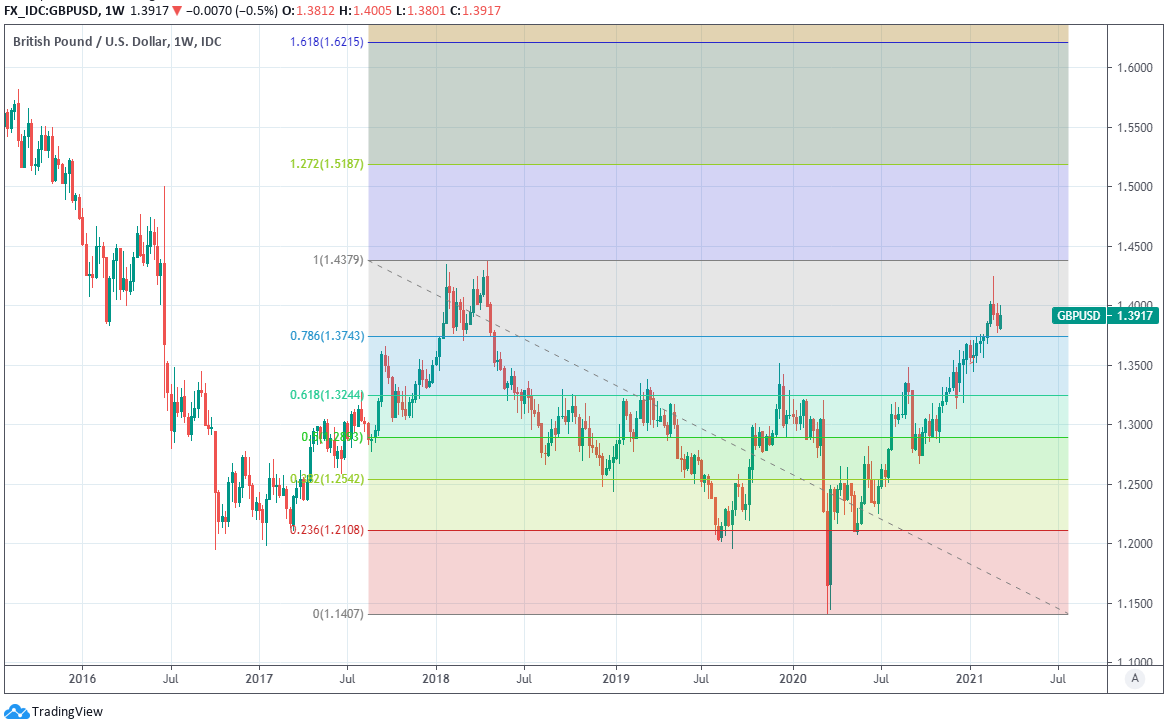 Above: Pound-Dollar rate at weekly intervals with Fibonacci retracements of 2018 downtrend.