The Pound-to-Dollar exchange rate suffered another setback last week as a rout in the U.S. bond market lifted the Dollar but with yields appearing to lose steam on Friday, Sterling could be set to recover its footing over the coming days before resuming its earlier climb to 1.40 and above.

Sterling tumbled as the Dollar was lifted across the board, cementing its position as the best performing major currency of the week after Federal Reserve (Fed) Chairman Jerome Powell neglected to calm a cratering bond market that lifted U.S. yields to pre-pandemic highs last week.

"Powell was given several clear set-ups by the interviewer to deliver a shift in stance (if anything the interviewer seemed to be pressing hard in that direction) but he eschewed the bait," says Kevin Cummins, chief U.S. economist at Natwest Markets. "The dollar also surged broadly, due in part to the Fed’s indifference on rising yields relative to some other central banks as well as a broader flight-to-quality when rising yields hit equity and emerging markets."

Powell told the Wall Street Journal that yields "caught my attention" and that the Fed "would be concerned by disorderly conditions,” but then said the bond sell-off simply reflects economic prospects that have improved with the rollout of vaccines and federal financial support. He insisted the bank feels no need to adapt policy and like other Fed officials, continued to pour scepticism over market concerns about a possible bout of runaway inflation ahead. 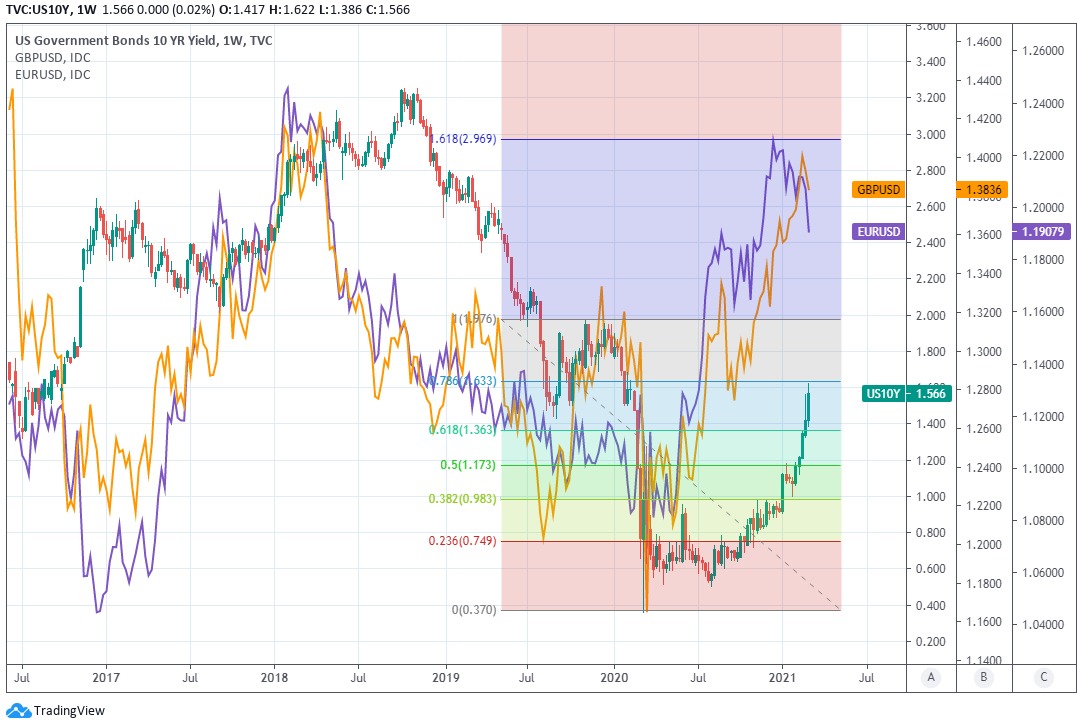 The brighter outlook has seen investors walking away bets against the Dollar at the same time as they walk away from bonds in case rising inflation later forces the Fed to lift its interest rate. The 10-year yield however wasn't able to sustain its upward momentum on Friday even after the payrolls report showed the U.S. creating nearly twice as many jobs as were expected last month. To the extent that this means the bond rout and yield surge is losing steam, it could support the Pound early in the new week.

"Economists seem to be competing among themselves to hike their US growth forecasts following: i) fiscal divergence, ii) vaccine roll-out divergence and iii) a more benign financial impulse from currency weakness in 2020," says Andreas Steno Larsen, chief FX strategist at Nordea Markets.

Meanwhile, Washington's new spending bill is also on course to receive congressional approval this Wednesday after securing Senate support and may bolster the Dollar further, although this isn't necessarily likely to effect Sterling due to what is an even larger amount of support in the UK and faster vaccine rollout. The UK is only major economy to outpace the U.S. on vaccinations and last week's budget made it the largest spender in the world on coronavirus-related support for firms and households.

"The speed of the rise in US yields is impacting positioning – especially short dollar positioning – and until we begin to see a little stability in Treasuries, the risk is that this bear market bounce in the dollar runs a little further," says Petr Krpata, chief EMEA strategist for FX and bonds at ING. "Once the dust behind the sharp spikes in UST yields settles and risks appetite stabilizes, GBP/USD should move back above 1.400 level (we target 1.50 later in the year)." 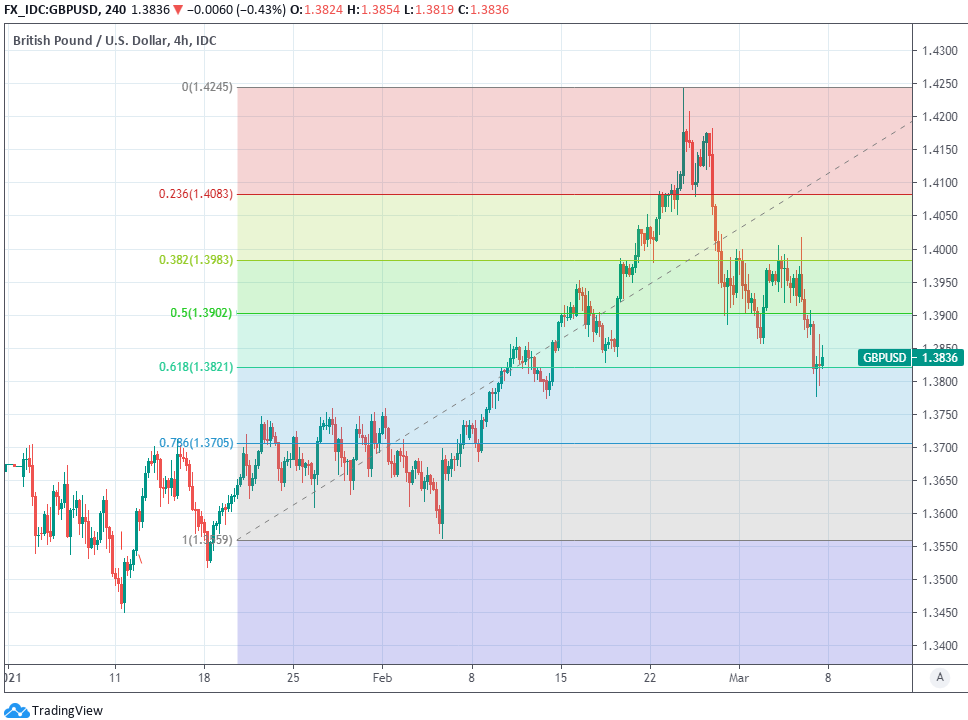 Above: Pound-to-Dollar rate at 4-hour intervals with Fibonacci retracements of January 13 extension higher.

"Next week is fairly quiet for the GBP from a home calendar standpoint after Bailey’s speech," says Juan Manuel Herrera, a strategist at Scotiabank. "On a closing basis, sterling will seek to hold above its 50-day MA at 1.3754 that counteracted GBP declines in December twice and is helping guide the GBP’s still strong upward trend — that is placed into doubt upon a drop below the mid 1.37s area which leaves the GBP liable for a decline to 1.35."

With global factors aside, the Pound will take direction from Bank of England (BoE) Governor Andrew Bailey, who'll speak about the improving economic outlook at 10:00 on Monday. The UK is forecast by economists to be one of the fast growing major economies this year due to, among other things, government spending and the unleashing of savings built up the national 'lockdown.' Should Bailey reiterate the idea that releasing this 'pent up demand' poses upside risks to the BoE's inflation target then it could potentially stand the Pound in good stead for the week.

Recent communications have emphasised those risks and encouraged investors to wager that the next move in interest rates will be up when as recently as early February the market had been expecting the BoE to cut Bank Rate from the current 0.10% around mid-year. Notably chief economist Andy Haldane said last month that "there is a tangible risk inflation proves more difficult to tame, requiring monetary policymakers to act more assertively than is currently priced into financial markets."

"The MPC will likely re-establish its structural upwards bias (on average it tends to overestimate growth in year three of its forecast by 0.7pp) and entertain upwards-sloping rate expectations," says Fabrice Montagné, an economist at Barclays. "Next week, we expect January GDP to print at -4% m/m as the economy entered the third national lockdown. That would be in line with a quarterly drop of -3.5% q/q as the lockdown is expected to last most of Q1." 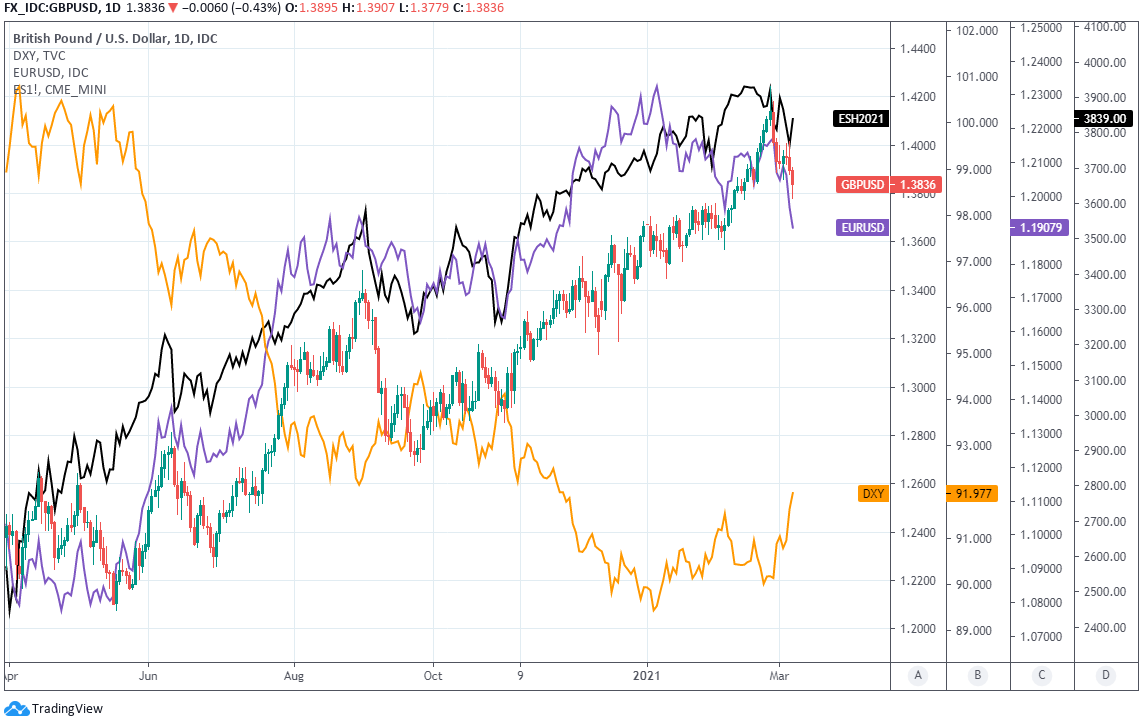