The Dollar retreated as stock markets and commodity prices started to recover some of the substantial ground lost over the past 24 hours, moves aided by some solid U.S. economic numbers.

"The U.S. economy made further progress towards recovering in the final quarter of 2020," says Katherine Judge, economist at CIBC Economics.

There was a clear market reaction at the time of the data's release: 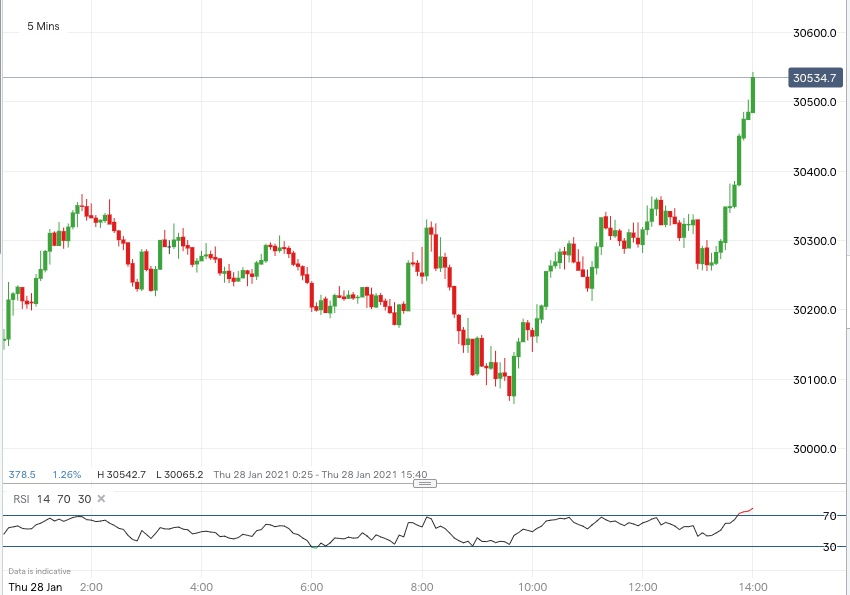 Above: Wall Street turned and went sharply higher when a tranche of data out of the U.S. was released at 01:30. Image courtesy of IG.

Judge notes the GDP report reflects contributions to growth from business investment, residential investment in new single-family housing, exports, and consumer spending, although growth in the latter component decelerated notably as the second wave weighed on activity towards the end of the quarter.

Also released alongside U.S. GDP was the weekly Initial Jobless Claims data, which indicated 847K people filed for unemployment support in the previous week, which is less than had been expected by the market.

"The good news is that 67K fewer people filed first time claims for unemployment insurance last week than they did in the prior week," says Tim Quinlan, Senior Economist at Wells Fargo Securities, LLC. "The bad news is that even after that decline, 847K people are still freshly out of work."

"The virus is still the driving force behind labor market dynamics, but the beginning of a downtrend in recent figures in terms of new COVID case-counts is an encouraging development," he adds.

"We’re happy to see jobless claims falling, but the seasonals pointed to a bigger drop, and it now appears that the underlying trend in claims has risen over recent weeks. The seasonal adjustment chaos caused by the holidays is fading from the numbers, so the data for the next few weeks should be less noisy. We’re hoping that the reopening of restaurants in some cities and states - especially, the return of outdoor dining in California - will slow the flow of layoffs," says Ian Shepherdson, Chief Economist at Pantheon Macroeconomics.

The market's reaction to the economic numbers was reflected by firming Pound exchange rates with a discernible reaction in the GBP/USD exchange rate being noted: 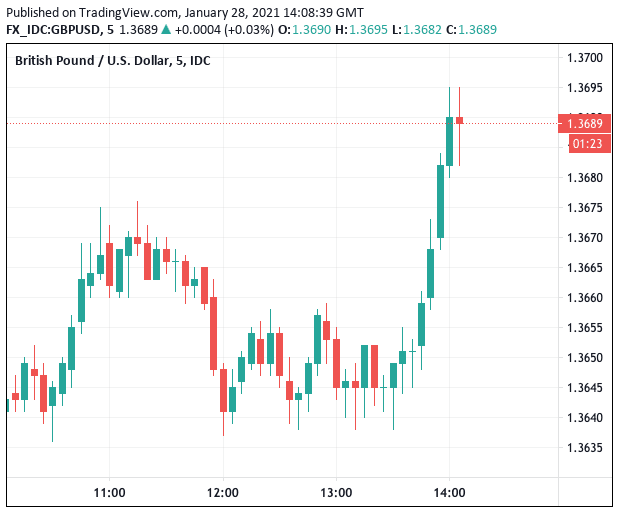 The Pound's reaction underlines just how important broader market trends and investor sentiment has become now that Brexit has faded in importance.

Sterling's 2021 rally against the Dollar suffered a setback on Wednesday following a deep slump in global stock markets, but a positive vaccination story in the UK is likely to underpin the currency over coming days and ensure damage is limited, particularly against the Euro.