The move higher in the U.S. Dollar is consistent with a move lower in global stock markets, confirming the U.S. currency's tendency to perform well when investors sell stocks.

Analysts we follow say the recovery in the U.S. Dollar is a rebound following the steady decline in the currency seen over many weeks, therefore it is not necessarily a more meaningful turn in the tide.

"We expect the dollar bear trend to take a breather in a week packed with risk events," says Francesco Pesole, FX Strategist at ING.

"After the sell-off of the US dollar into the end of 2020, the dollar is now retracing that weakness and history suggests a strong seasonal pattern that points to the potential for further near-term strength," says the analyst.

Manuel Oliveri, FX Strategist at Crédit Agricole says, "we now believe that a less bearish stance on the USD is warranted in the near term, to the extent that a more aggressive fiscal stimulus gives the near- term US economic outlook a more meaningful boost and propels higher both US stocks and UST yields."

The Dollar has risen ahead of the weekend amidst a turn lower in markets, with some commentators this is a 'sell the fact' reaction to the announcement on Thursday by incoming U.S. President Joe Biden of a near-$2TRN support package.

"It looks like the announcement of Biden’s stimulus plan and the arrival of earnings season was the cue for investors to begin cutting back on equity allocations, and after such a strong run higher since late October no one can really blame them," says Chris Beauchamp, Chief Market Analyst at IG.

But, there is more than just a 'risk-on/risk-off' driver of the Dollar of play, coming in the form of the U.S. bond market.

The Dollar had already benefited this week following a rise in the yield paid by U.S. bonds; the Dollar does tend to react to two-year bond yields in particular.

A theme capturing the attention of market participants of late has been the potential for a more substantial rise in inflation in 2021 owing to expectations for an economic recovery from the covid-19 crisis. Inflation expectations have only risen even higher in the wake of Biden's proposal to give an additional $2000 to every American.

Higher inflation expectations tend to push up yields on bonds as investors require a greater return on their bond investments if they believe their investment will be eroded by rising prices.

Higher 2-year yields meanwhile pull the Dollar up, as shown in recent moves in the U.S. Dollar index: 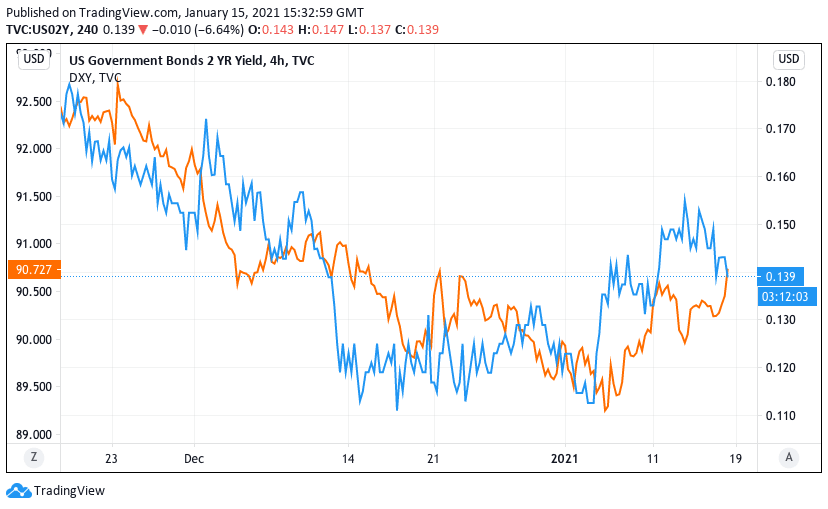 Above: The rise in 2-year treasury bond yields in 2021 has corresponded with a rise in the USD.

"We are only into our second week of the year but we have already had a very meaningful move in UST bond yields. Up to the intra-day peak this week, the ytd move higher was 28bps. Yields have since dropped but we see this as certainly providing much more balanced flows to FX markets that has resulted in the US dollar correcting stronger," says Halpenny.

A number of foreign exchange analysts we follow say the Pound and Euro are likely to be passengers in the Dollar's journey near-term, meaning the above-mentioned themes are expected to remain the prime drivers of GBP/USD and GBP/EUR next week.