The Pound-to-Dollar exchange rate is under pressure at the start of the new week amidst a broad-based recovery in the U.S. Dollar amidst soft investor sentiment.

Global stock markets are softer after a strong start to 2021 that left valuations looking increasingly stretched and the market a little too one-sided in its optimism, despite ongoing covid-19 lockdowns in some of the world's largest economies.

"A whiff of risk-off in the air overnight, providing the US dollar with a lift," says Alvin T. Tan, Asia FX Strategist at RBC Capital Markets. "Rising U.S. bond yields are again being named as the chief culprit, plus a possibly overstretched risk rally. The poster child of the current speculative excess, Bitcoin, is down over 11% intraday as of this writing. Commodity currencies are leading the decline in G10 space." 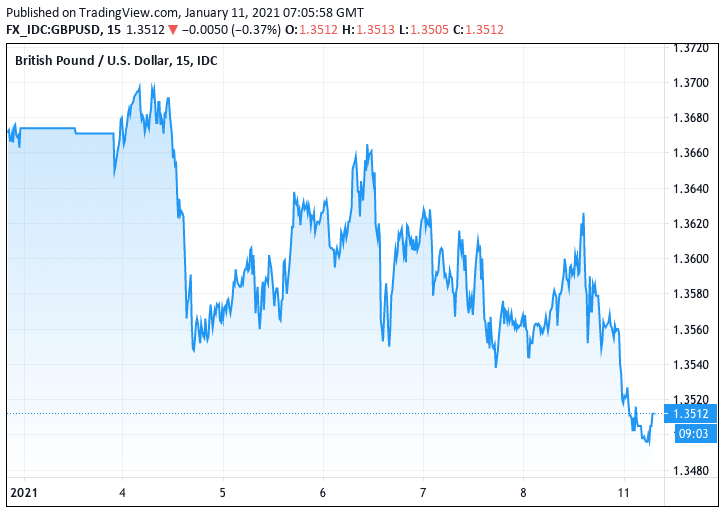 GBP/USD is tipped by some analysts for a further retreat over the coming days as Sterling finds itself vulnerable to any further profit-taking by investors on wagers against the Dollar. For Sterling, a return to 'lockdown' took the wheels off its earlier recovery last week, making it the worst performing major currency of 2021 already, and further challenges now lurk on the immediate path ahead.

However, even if Sterling navigates this without upset, the Pound-Dollar rate may still be vulnerable to further declines if profit-taking on investors' earlier wagers against the Dollar - involving GBP/USD sales for some - continues.

"The first week’s FX trading of the year provides a mini-version of what we expect for the year as a whole. The global upswing story remains prominent, boosted by the Democrats gaining control of the US Senate and the continued rollout of the COVID-19 vaccine. Risk on G10 currencies are strongest," says Daragh Maher, head of U.S. FX strategy at HSBC. "GBP is the underperformer so far, and we expect the currency’s struggles to persist. The first week’s price action also is consistent with our view that while the USD may be on the defensive, any weakness will likely have its limits as we view this as a cyclical USD reaction to the global upswing rather than a structural USD bear story." 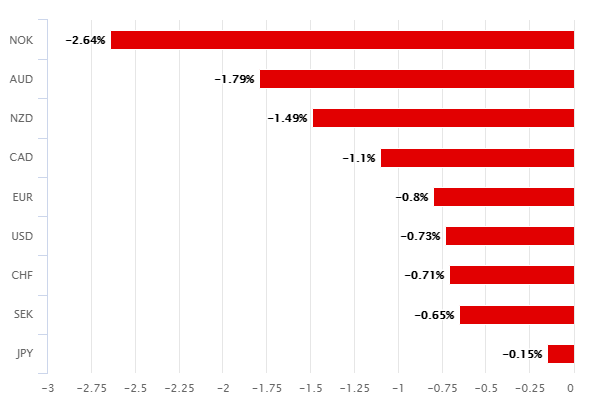 Dollars were bought back widely after the Georgia State election rerun handed the Democratic Party a majority in the previously-Republican Senate, giving the party an absolute majority in Congress and the incoming President Elect Joe Biden greater freedom to implement his policy agenda.

"The US dollar caught some support overnight from rising US nominal yields. This was helped by supportive statements from a couple of Fed speakers. Fed President Bostic said that the Fed could taper bond purchases "sooner than people expect" if the economic recovery proved stronger," says Tan. "This view was backed up by Fed President Evans, though he added that it was still much too early to have a firm judgment."

Only time could confirm the underlying motivation of investors who cashed out from earlier wagers against the U.S. currency.

This is not least of all because the election result and subsequent surge in U.S. government bond yields came amid an unprecedented and unruly protest in Washington as well as various remarks from Federal Reserve (Fed) policymakers suggesting that a tapering of its government bond buying scheme may come sooner rather than later.

"The DXY has recovered well from the mid-week low, staged a bullish extension on the charts yesterday (forming a ‘morning star’ reversal on the daily candle chart) and has made a tentative break above short-term bear trend resistance. Some consolidation or stabilization in the broader USD downtrend would not surprise us at this point," says Shaun Osborne, chief FX strategist at Scotiabank. "We note that seasonal trends typically turn more USD-supportive in Q1 and a rise in US yields/drop back in commodities and stocks might well be the catalyst for a modest correction at least in the weak USD trend." 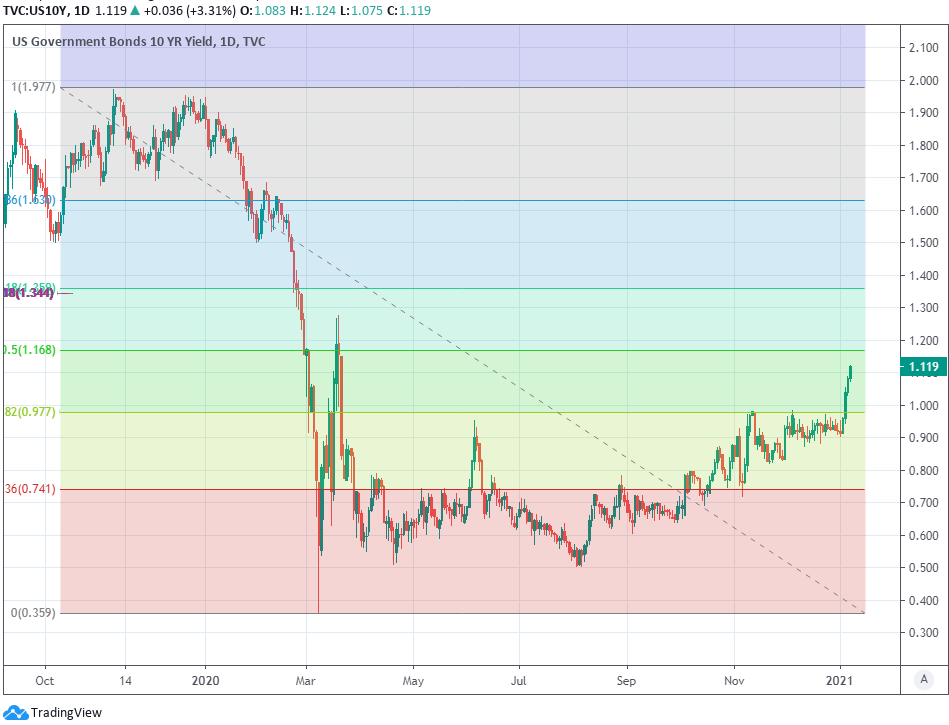 It's possible that unrest in Washington alone explains why investors got cold feet on bets against the greenback, but it's also possible they were responding to Fed policymakers' suggestions that a reduction to the bank's $120bn per month of bond purchases could be likely in the months ahead. Such a pivot could lift U.S. government bond yields further and, crucially, for Dollar-friendly reasons. Meanwhile, Georgia State's election result has more nuanced implications.

"The markets celebrated the Georgia blue sweep and find that a blue (de facto) senate majority will lead to further direct transfers and an increasingly reflationary environment. Chuck Schumer (Democrat senate minority leader) has promised to increase direct transfer cheques to 2000$, but outside of that promise, is it then crystal clear that Democrats will prove to be more reflationary than the Trump administration? We highly doubt it," saus Andreas Steno Larsen, chief FX strategist at Nordea Markets. "We place our chips on LESS stimulus from Bidens administration compared to Trumps administration."

Georgia's election result also almost certainly played a role in the bond sell-off and resulting break higher for yields, given that it's widely perceived as likely to herald even greater levels of government spending and debt issuance. 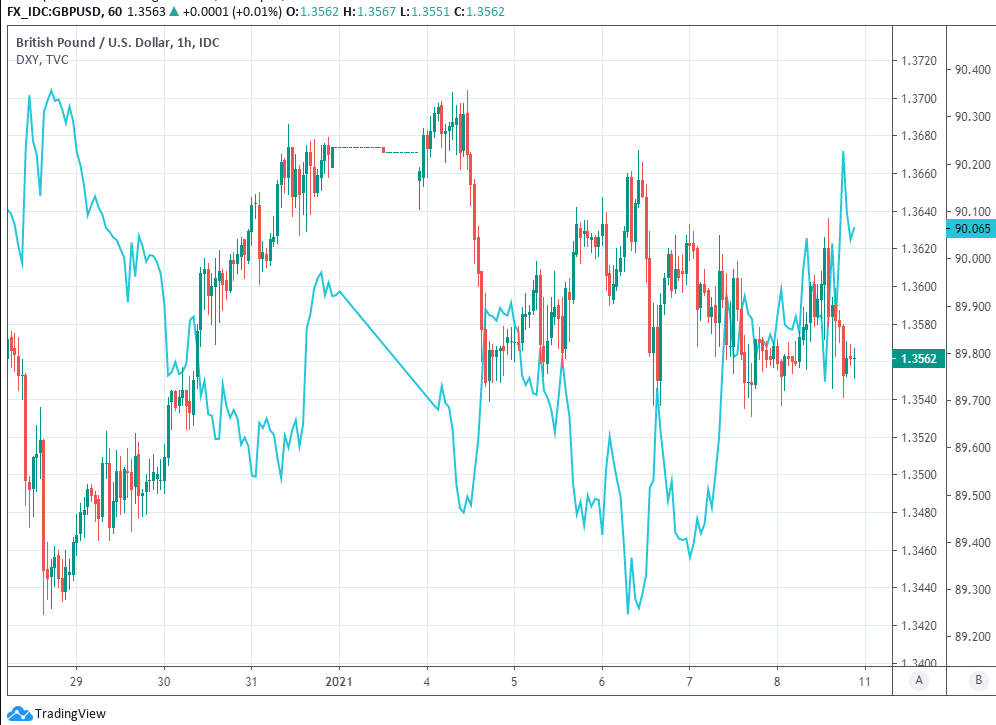 But the extent to which the latter above could be a Dollar-supportive factor is a lot less clear. Nonetheless, investors have been buying back previously-sold Dollars in what is at least a short-term headwind for the Pound-to-Dollar rate.

"The recent key day reversal just ahead of the 1.3712 February 2018 low is likely to lead to a near term reaction lower," says Karen Jones, head of technical analysis for currencies, commodities and bonds at Commerzbank. "Currently, the Elliott wave count is implying a slide to 1.3370. Only a rise above 1.3712 on a daily chart closing basis would push the 1.3836 February 2016 low to the fore. Longer term the 2018 peak at 1.4377 is being targeted."

Jones and the Commerzbank team say that so long as the Pound remains above 1.3135 its uptrend against the Dollar will remain intact.

They're looking for a return to the 2018 high of 1.4377 within the next three months or so but also anticipate that before then the greeback will get the better of the Pound and may push it as far as 1.3370 over the coming days.

The Pound's bullish medium-term outlook is insured by the largest vaccine stockpile in the world after Canada's, which creates scope for the UK economy to get a headstart in any global recovery.

"This is potentially a relatively bullish story for GBP, if the UK keeps outpacing peers in the vaccine program," Nordea's Larsen says.

As far as internal developments go for this week, speeches from BoE policymakers and November's GDP data are noteworthy for the week ahead. Silvana Tenreyro will speak at 14:00 on Monday before Ben Broadbent tackles "Covid and the composition of spending" at 10:00 on Tuesday.

November's GDP data is due out at 07:00 on Friday when economists will be looking for a -4.4% fall in response to tougher coronavirus-related restrictions that saw businesses in the hospitality sector asked to close again.

With those aside, the Pound-to-Dollar rate agenda is beholden mostly to international factors, which could be set to work against it.

On the Dollar side, there are multiple speeches from Fed rate setters scheduled and culminating on Thursday in an address from Chairman Jerome Powell to a webinar audience hosted by Princeton University at 17:30 London time. In addition, December's retail sales data are out at 13:30 on Friday when consensus will look for a -0.01% fall in the more important core number, which excludes car sales, and a no change 0% reading of the main index. 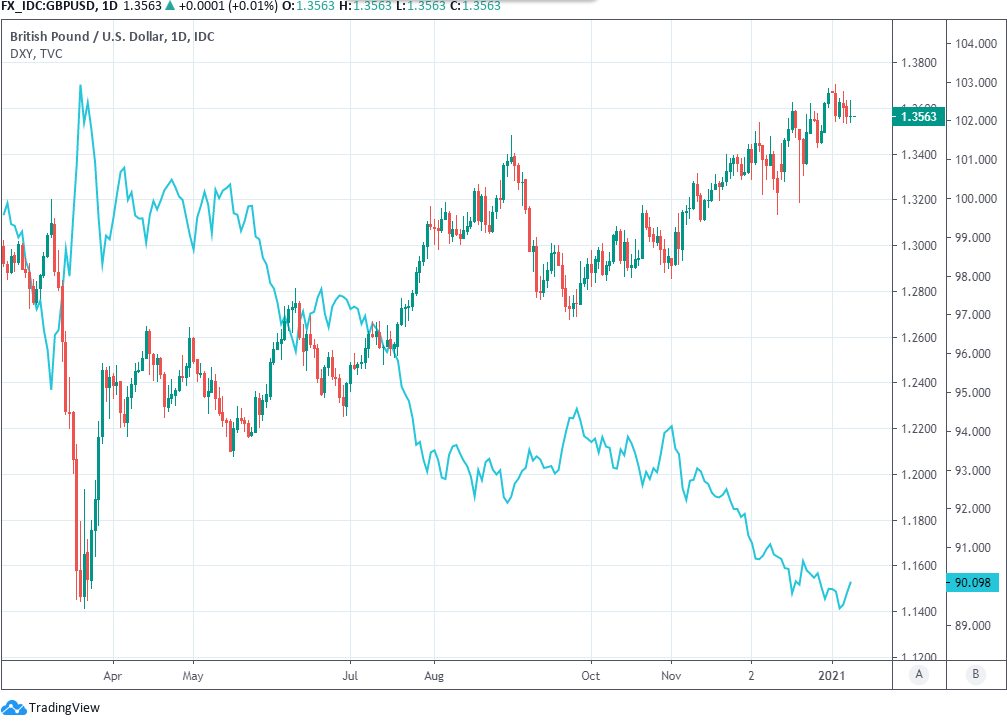