The Dollar Index was said to be on the verge of another leg lower on Wednesday as the S&P 500 threatened to break its September highs, but with political acrimony returning the European continent and a key Brexit deadline looming, the greenback could yet be kept from new 2020 lows.

U.S. Dollars were sold widely on Wednesday, enabling other major currencies to advance in line with global stock markets that have been boosted again this week by further reports of progress in the search for a coronavirus vaccine.

Moderna and Pfizer have said this week and last that their vaccine candidates proved highly effective in clinical trials, fostering hopes of an international rollout in early 2021 that aids the global economic recovery next year and leading the S&P 500 to edge above 2020 highs with possibly bearish implications for the Dollar.

"News of an improvement in the effectiveness of the Pfizer vaccine helped markets to find their footing on what was otherwise an uneventful day," says Chris Beuchamp, chief market analyst at IG. "From here on in the vaccine news is less likely to have a major one day impact, but instead a steady drip-drip of news will help the market to remain steady as it looks for the next major catalyst for further upside after a very strong first half of the month." 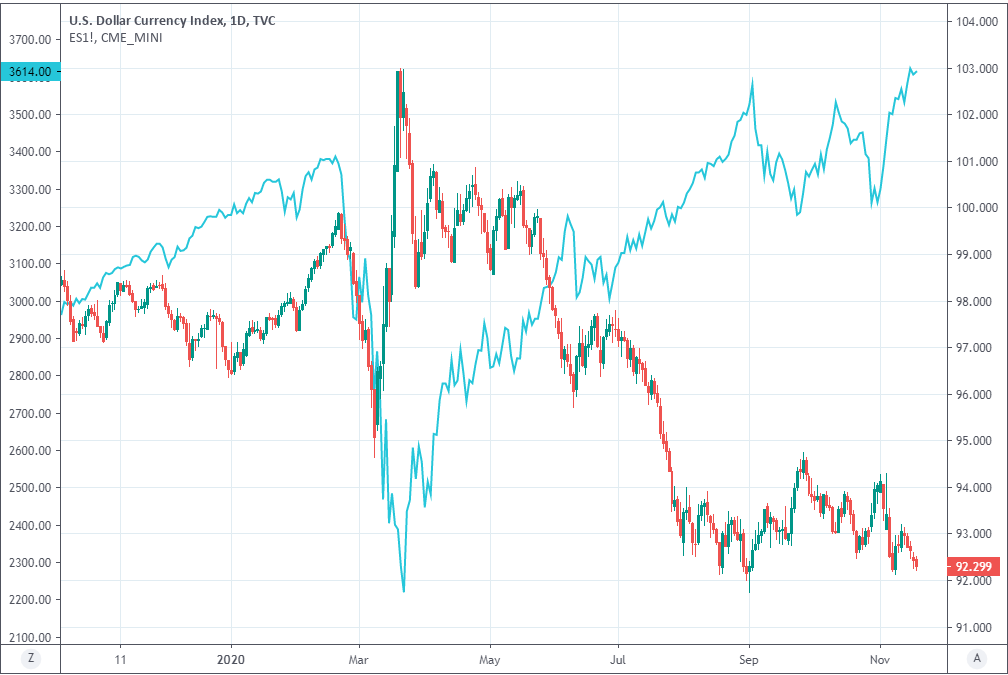 Vaccine progress has helped sustain investors' appetite for risk even in the face of what renewed, but also prolonged 'lockdowns' in Europe, with the resulting stock market gains helping to keep the Dollar Index on course for an important technical support level around 92.0.

"The broad based USD is approaching strong support levels with DXY at 92.00/10 and BBDXY at 1146.00/10. The S&P 500 is breaching resistance at 3600, a level it has tried back in early September and again early last week," says Sarah Ying, a strategist at CIBC Capital Markets. "Should we see the S&P 500 comfortably break this resistance level, we can see the broad based USD break through support levels as well, given the tight negative relationship."

The implication is that further gains in equities will lead to additional declines for the greenback, although this relationship between stocks and the Dollar Index exists as it is because European currencies like the Euro and Pound have so-far and  to at least some extent matched the moves seen in stocks.

But a new quarrel between European leaders and a possible disappointment of elevated expectations for an imminent Brexit deal could yet keep the Dollar Index from falling to new lows, even if stocks continue to advance. Correlations between currencies and other assets classes are not fixed in any way much less in perpetuity while the relationship the Dollar Index and stock market indices would turn on its head if the Euro and Sterling tumbled over the coming days. 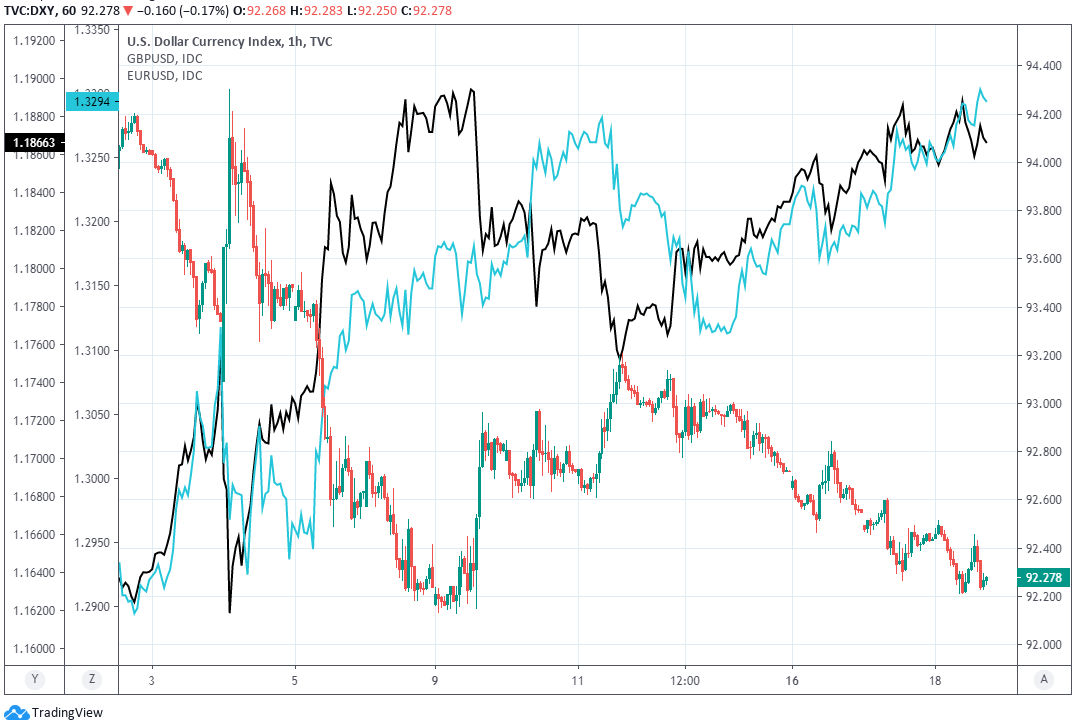 The Dollar Index is around two thirds comprised of Sterling and Euro transactions so would rise if those two currencies declined, as they did toward the end of the session on Wednesday, which means European politics are again at the forefront of the currency market's agenda.

"Despite the acrimony even now between the negotiating teams, the UK and EU will very soon announce they have achieved a Brexit Deal," says Dr Savvas Savouri, chief economist at Toscafund Asset Management. "It will prove to be a deal that clears a very troubling dark cloud which has hung over the pound and sends it, markedly, higher as a result. Specifically, I have no doubt sterling will sharply gap-up to at least 1.30 against the euro and 1.60 relative to the dollar.”

Expectations of a deal have risen, lifting the Pound as well as forecasts for it in the process, and were resilient this week to Sunday's remarks from British negotiator David Frost, who said significant disagreements still remain and that an agreement may not be reached after all.

Thursday's European Council leaders meeting has been widely billed as the last minute deadline for a deal to be struck, which could mean the Pound and its share of the Dollar Index will be sensitive ahead of the weekend to each sides' anticipated verdict on the talks thus far.

Any rhetoric that stokes renewed concerns about a 'no deal' from the transition at year-end could undermine the Pound and support the Dollar Index, especially if such moves come alongside possible Euro declines. 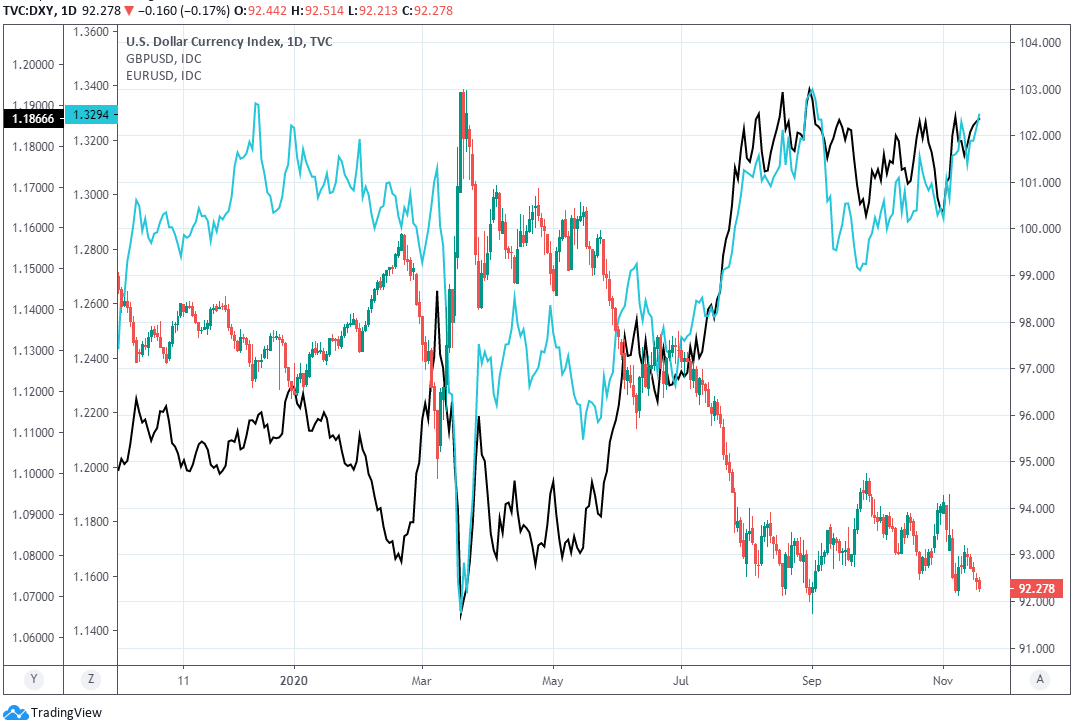